Prints, artist 's books and drawings by Andy and Julia Warhola from the collection of Ms. Betty Lou Davis, a personal friend of both artists in the pivotal years of the late 1950s.

In 1955, a young Andy Warhol was on the cusp of an explosively successful artistic career. He actively cultivated high profile social connections and made art, while continuing to work full time in graphic design. Indeed, that year he began an exclusive two-year print advertising design campaign for I. Miller & Sons Shoes, creating drawings of expensive women's footwear that would appear in fashion magazines, The New York Times and Herald Tribune society pages each week. The ads were wildly successful for both the store and the artist. As a result, Warhol was given increasing leeway in his imagery, with one ad featuring rows of embellished heels (hinting at later recurrent themes of repetition) and another featuring only a pear tree to invoke associations with a new pear–colored spring shoe.

Around the same time, Warhol self-published a series of portfolios, prints and books which were often lettered by his mother, and hand-colored by himself or friends, and given away as gifts or self-promotion. One of these, "À la Recherche du Shoe Perdu," included delicate and colorful shoes with witty titles and allusions to the rich and famous. 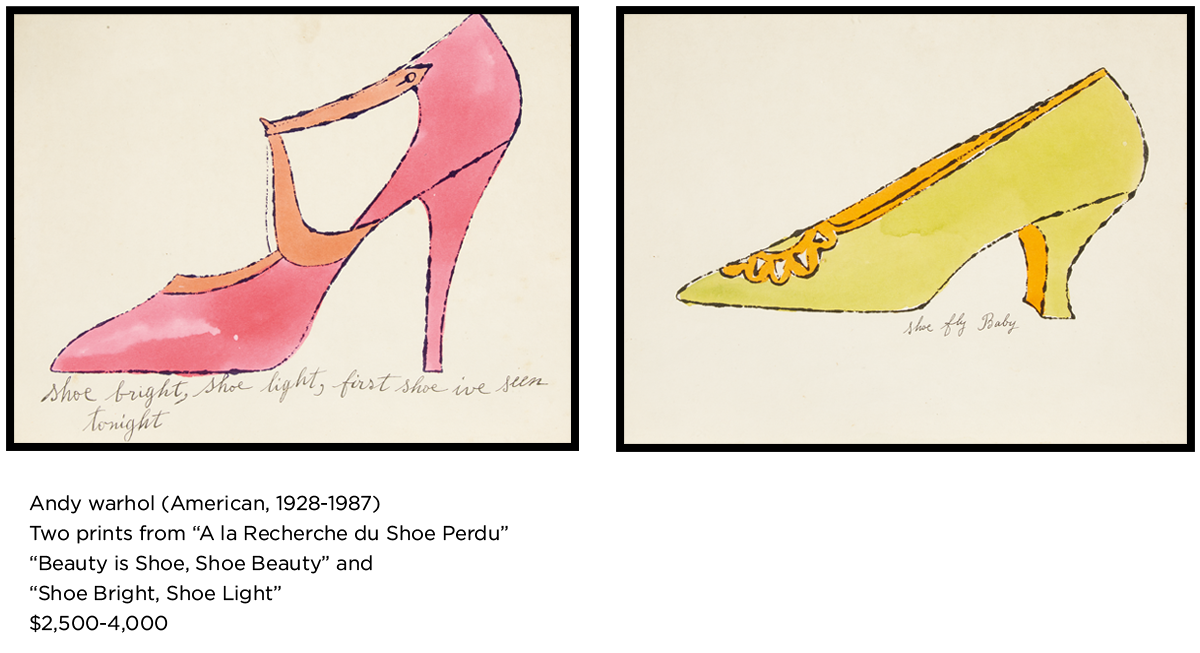 A year or two later, a young aspiring pianist named Betty Lou Saxton made her way from a small town in Ohio to Manhattan to study classical piano at Julliard and academics at Columbia. She shared an apartment with five other young women and was quickly enveloped into a lively and diverse artistic social community. Betty Lou's mother had every intention that her daughter would become a talented pianist, but once Betty Lou arrived in New York, her interest in music waned as her love of the city and its lifestyle bloomed. Betty Lou, a present day resident of suburban Philadelphia, happily declares of her jettisoned musical career, "It was worth it – it got me to New York!"

Betty Lou quickly found herself immersed in a ready-made social world comprised of fellow musicians, artists and illustrators. Betty Lou was thusly introduced to Andy Warhol who by then had concluded the I. Miller print campaign and was designing the shop windows for the high-end department store, Bonwit Teller.

Through this friendship, Betty Lou came to know Warhol's mother, Julia Warhola, and remembers regularly visiting their residence at 34th Street and Lexington Avenue. As Betty Lou recalls, Andy Warhol in those years made a daily circuit from his home to Bonwit Teller and finally to the public library, where he would spend hours perusing their picture and print archives for inspiration. Indeed, as art historians have noted, Warhol was insatiable in his quest for inspiration which he drew from art history, design, friends and of course, popular culture. 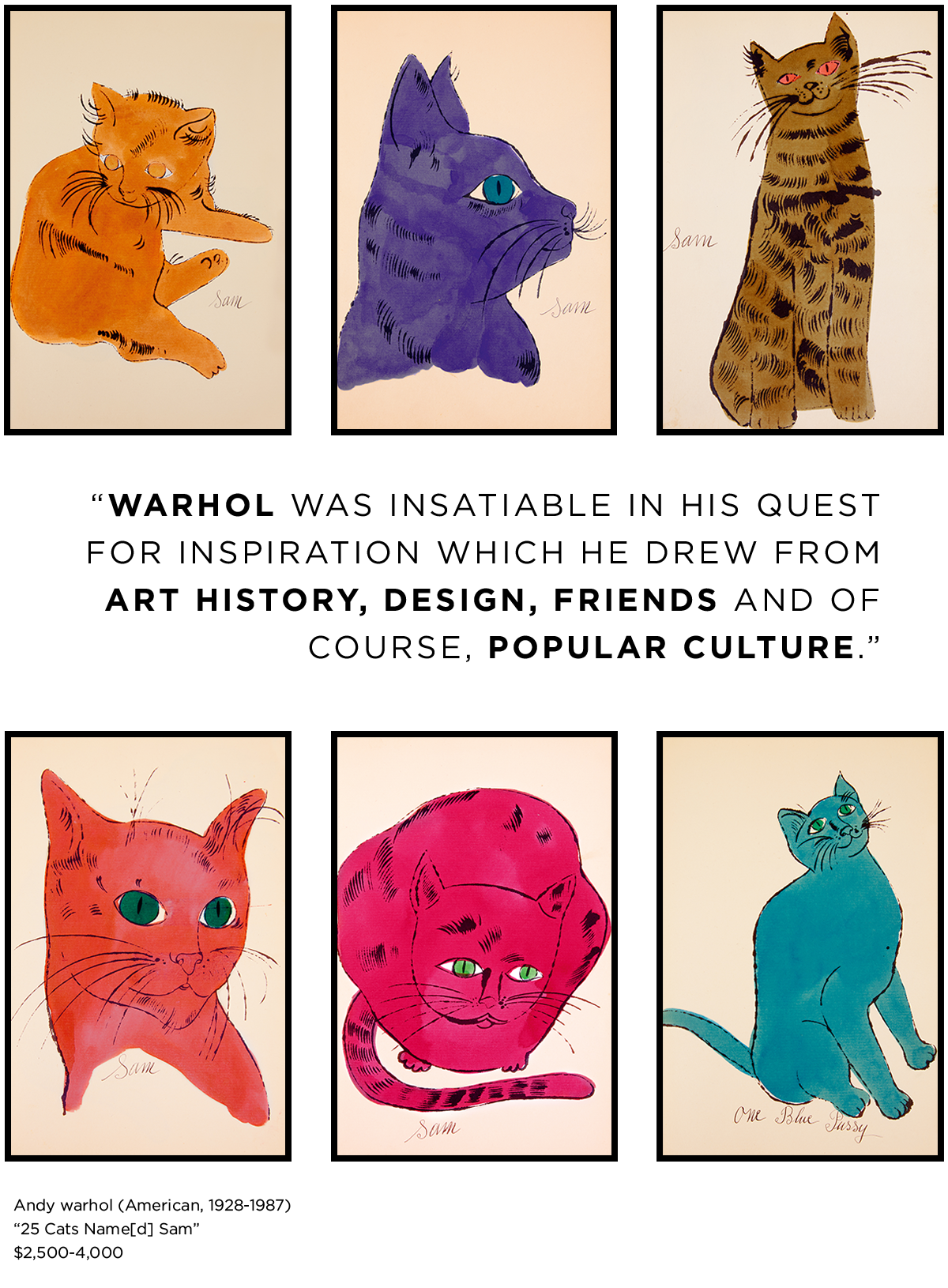 In these years, Warhol's nickname for Betty Lou was "Marigold" as "he thought I should marry gold" Betty Lou warmly recalls now. Julia Warhola, Betty remembers, was a petite older woman who always wore a babushka and lived in the top floor of the brownstone with her many cats. Betty Lou and Julia struck up their own friendship, and one day Julia presented Betty Lou with an ink drawing entitled, "Purr, Purr, Purr...." Betty Lou asked Julia to sign the drawing, and the artist complied, penning 'Andy Warhol's Mother.'

"Even then, based on the company he was keeping, she had some sense of who he would become," Betty Lou explained.

In 1989, Grey Gallery borrowed this work for the exhibition, "Success is a Job in New York" which toured to the Carnegie Museum of Art, Pittsburgh; Serpentine Gallery, London and the Institute of Contemporary Art, Philadelphia.

For four or five years, Betty Lou's social orbit included Andy Warhol, John Ardoin, the composer-turned-editor and photographer for 'Musical America,' Theodate Johnson, owner and publisher of the magazine and sister of renowned architect Philip Johnson, and many others. Betty Lou became romantically involved with Ivan Davis, a classical pianist who went on to study in Italy on a Fulbright, and later toured with the New York Philharmonic and many other illustrious orchestras.

Betty Lou maintained her friendship with Julia Warhola during these years, and knowing of their close relationship, Warhol gave a copy of his mother's book, "Holy Cats by Andy Warhol's Mother" dedicated to both "Betty Lou Pie and Ivan Pie." Because of their friendship with Theodate Johnson, in 1960, the two were married at Philip Johnson's Glass House in New Canaan, Connecticut. 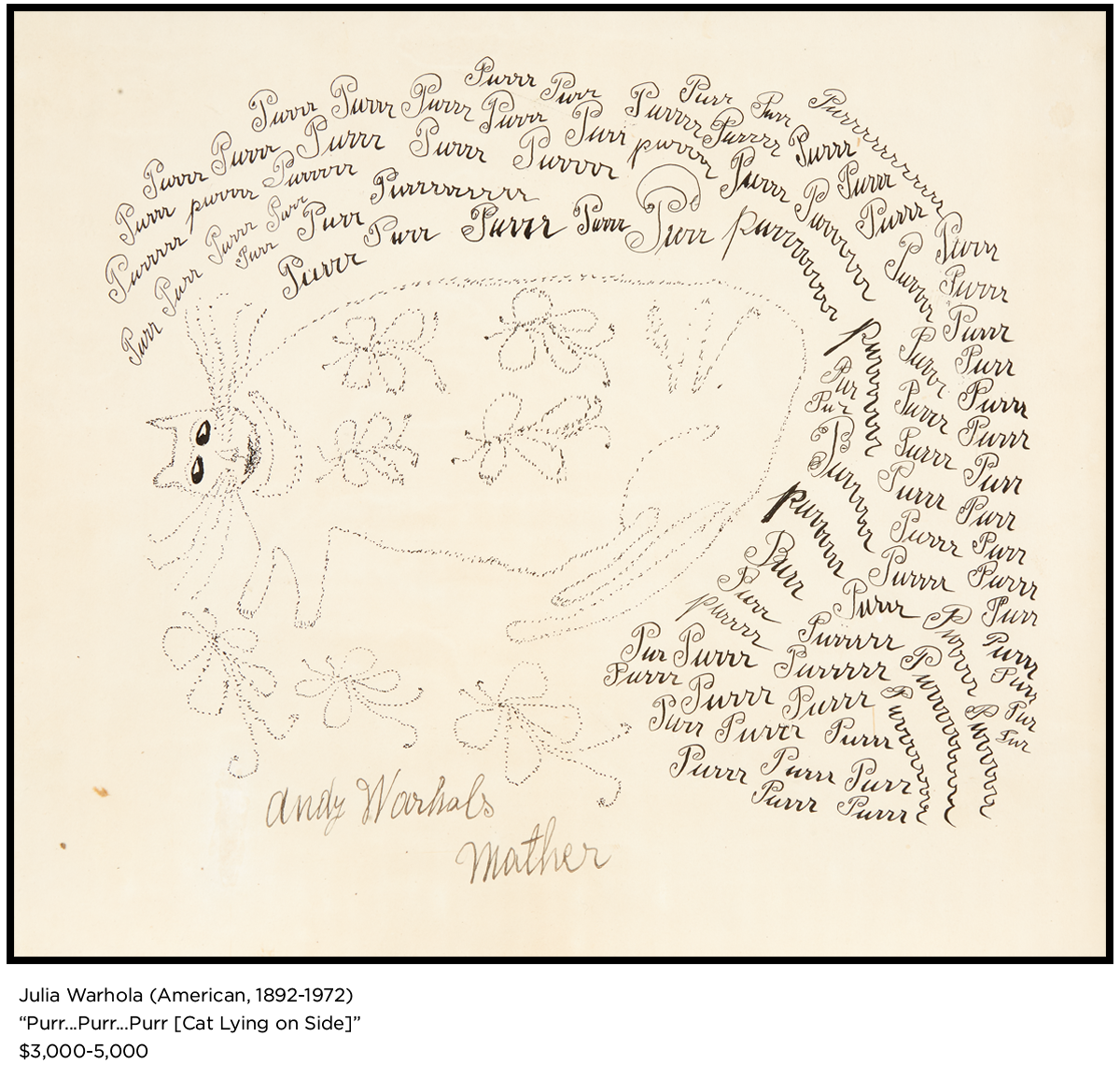 This network of artists and musicians were fixtures at the now famous Serendipity 3, where Warhol's parties and openings were often photographed by John Ardoin. Betty Lou also recalls Andy entertaining at Café Nicholson, a southern-style restaurant also frequented in those years by Harper Lee, Tennessee Williams and Truman Capote. Davis attended Warhol's dinner and coloring parties where the artist's offset lithographic books were hand-colored by friends and given as gifts.

Offered for sale in Betty Lou's collection on November 13 are three group-lots of such prints from the "Shoe" book, a group of recipes from "Wild Raspberries" and a complete and bound copy of the hand-colored book "25 Cats Name[d] Sam." Additionally, two ink and watercolor drawings of cats will be offered, along with the aforementioned drawing and book by Julia Warhola. These books, prints and drawings have served as intimate reminders of happy memories for their original owner for over 60 years, and speak to a pivotal moment that foreshadows the artist's style, themes and fame that ensued for decades thereafter.