In the provincial city of Nancy, ornately gilded ivy crawls up wrought iron lamp posts, gates, and decorative balconies. Baroque architecture and an arc de triomphe delineate the city 's cobblestone center Place Stanislas, named for the Polish Duke of Lorraine under whose patronage it was built. The design and construction of this urban center in the mid eighteenth century brought a cultural renaissance to Nancy. About a century and a half later the Franco-Prussian War divided the province; as a result, many refugees from France 's easternmost province settled here. Nancy once more saw a large influx of professionals and artisans, giving birth to another cultural renaissance and resulting in a triumph of the decorative arts.

This collection of Art Nouveau decorative art features three artists who were the leading figures of the école de Nancy. Emile Gallé, Louis Majorelle, and Antonin Daum all began work in their respective family businesses; Gallé and Majorelle were from Nancy, while the Daum family emigrated there from a region farther east. These decorative artists led a movement that was deeply rooted in provincial life, and inspiringly embraced modernity for their own expressive purposes.

From a young age, the school's leading figure Emile Gallé, was fascinated by botany. Throughout his life he would find inspiration in the local flora, fauna, and insects of the region, rooting his style of Art Nouveau in the provincial. Gallé also displayed strong provincial pride by heavily featuring the cross of Lorraine, inherited by the Duke of Lorraine in the fifteenth century, as ornamentation in his work. As a child, Gallé took to sketching the region's native plants; later they would be acid-etched into the glass and marquetry-inlaid into the wood of his creations.

It was because of Gallé's lifelong study of and passion for natural life that his ornamentation takes on a life of its own. He even took to cultivating a garden around his woodworking shop, organizing it by genus and species. It was filled with local flora, fauna, and weeds that grew freely. His vegetable garden proved to be the perfect space to study local insects. Gallé also found inspiration in flowers native to Japan, which had opened up in the earlier part of the century. Gallé's knowledge of botanical methodology gives his work a "supernatural" effect, as Maurice Rheims notes in his study of the Art Nouveau moment. Galle showed it possible that nature and science could be reconciled through art.

In 1900, Gallé took the country by storm at the Paris Exposition, proving himself to be an expressive force to be reckoned with. His exhibition included a full size glass furnace from his workshop, glass pieces etched with cultural criticism, and shattered shards of glass that were spread on the ground in front, as proto-performance art. 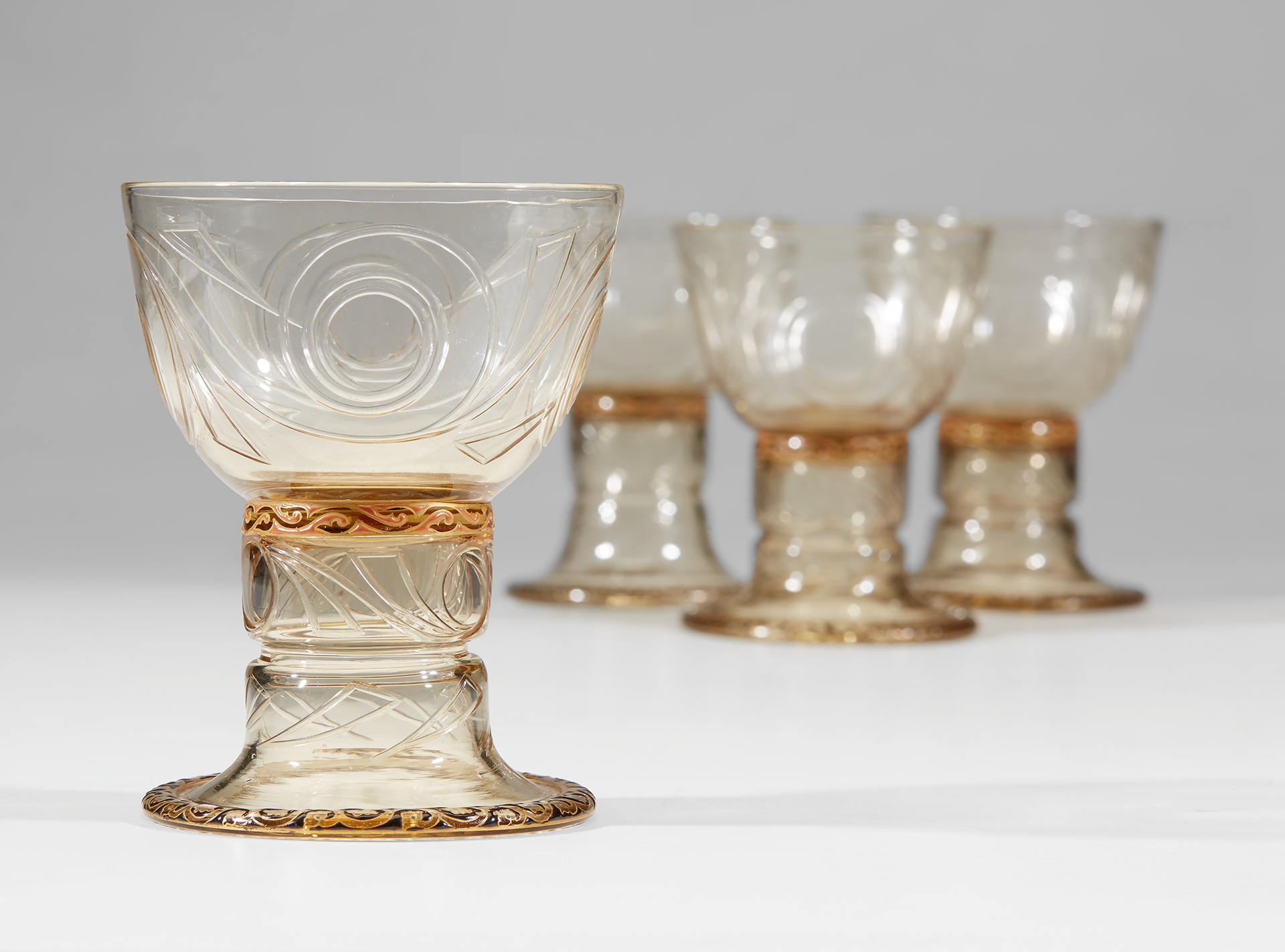 Louis Majorelle began working with Gallé around 1894. When the école de Nancy officially opened in 1901, he, along with Antonin Daum, served as Gallé's Vice Presidents. Both Daum and Gallé supplied Majorelle with glass as he began exploring the qualities and workmanship of metal. Majorelle studied under Jean-François Millet known for his rural subjects in a realist mode at the école de Beaux-Arts. Before developing a more personal style under Gallé's influence, Majorelle worked primarily with historicist styles for his father's business. The design of this collection's Majorelle tables display the sumptuous, dynamic, and naturalistic contours that he came to master as a furniture designer. His masterful curvature of form won him praise and international attention at the Paris Exposition. With the connections formed during his time at the école de Beaux-Arts, Majorelle secured frequent major exhibitions in Paris. 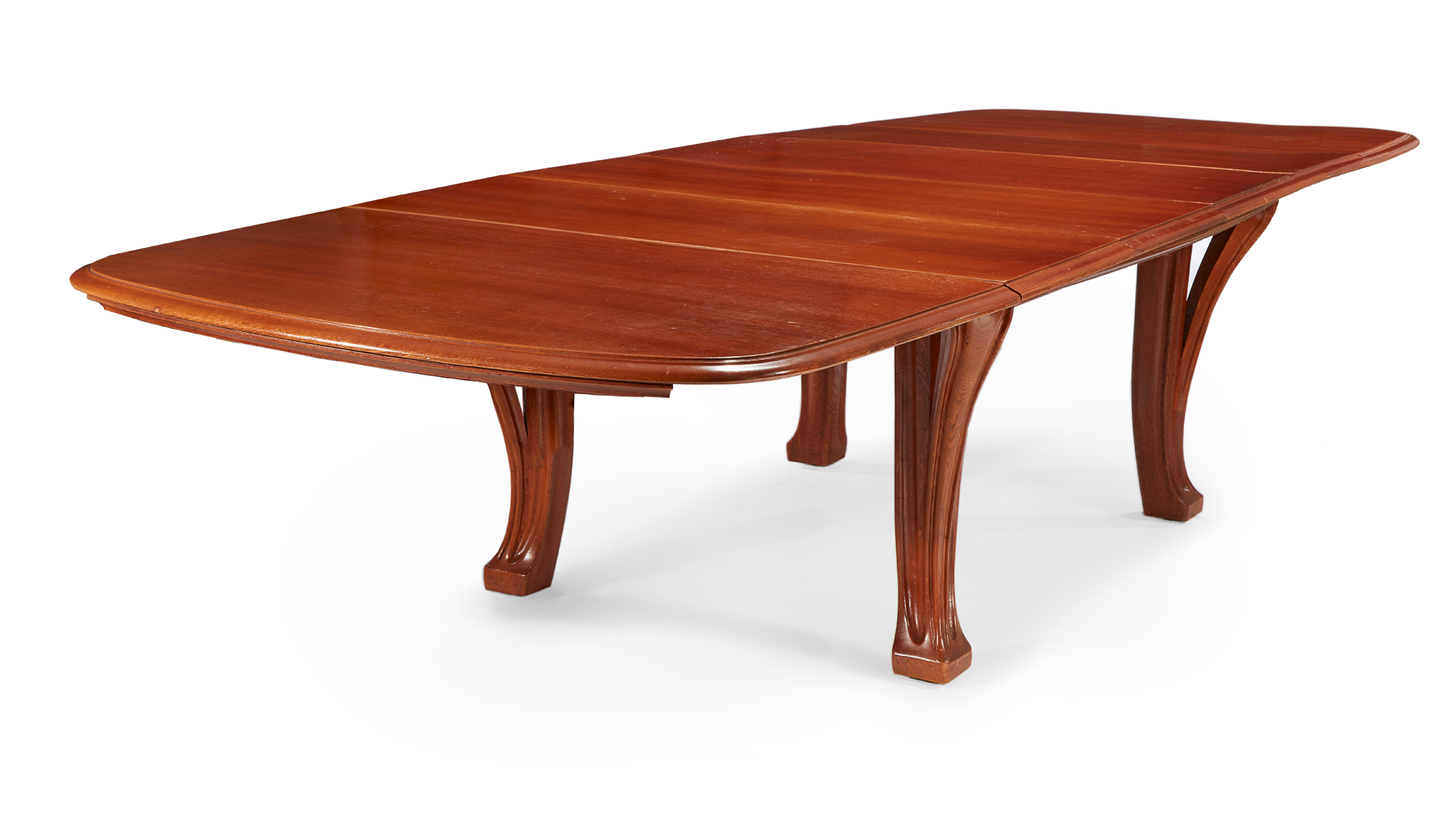 The Daum family came to settle in Nancy after fleeing Bitche as a result of the War. In 1889, the Daum brothers visited the Exposition Universelle in Paris, during which the Eiffel Tower officially opened. There they saw the work of Gallé and Majorelle. At the Exposition of 1900, Daum and Majorelle exhibited decorative lamps together, where Majorelle's nuanced metalwork took on the contours of a stem and Daum's glass, the delicacy of petals. Just as Gallé left an impression on the work of Majorelle, it left an indelible mark on the Daum studio. Like Gallé, Antonin Daum mastered the ornamental acid-etch technique, and, after the death of Gallé in 1904, went on to revitalize the pâte-de-verre technique pioneered by ancient Egyptians. 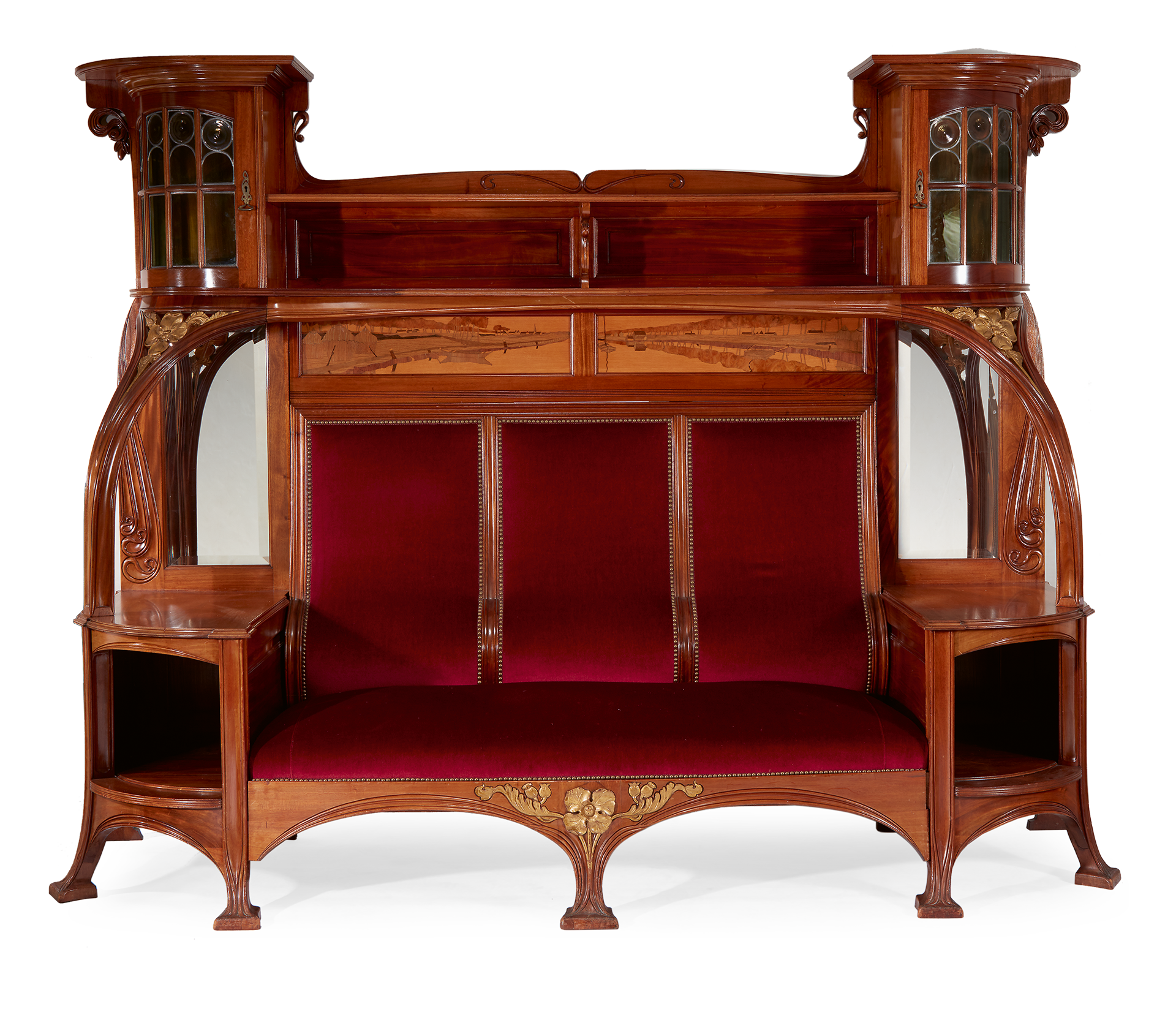 Lot 44 | A ttributed to Eugène Vallin, Vitrine Cabinet and Sofa, France, circa 1905 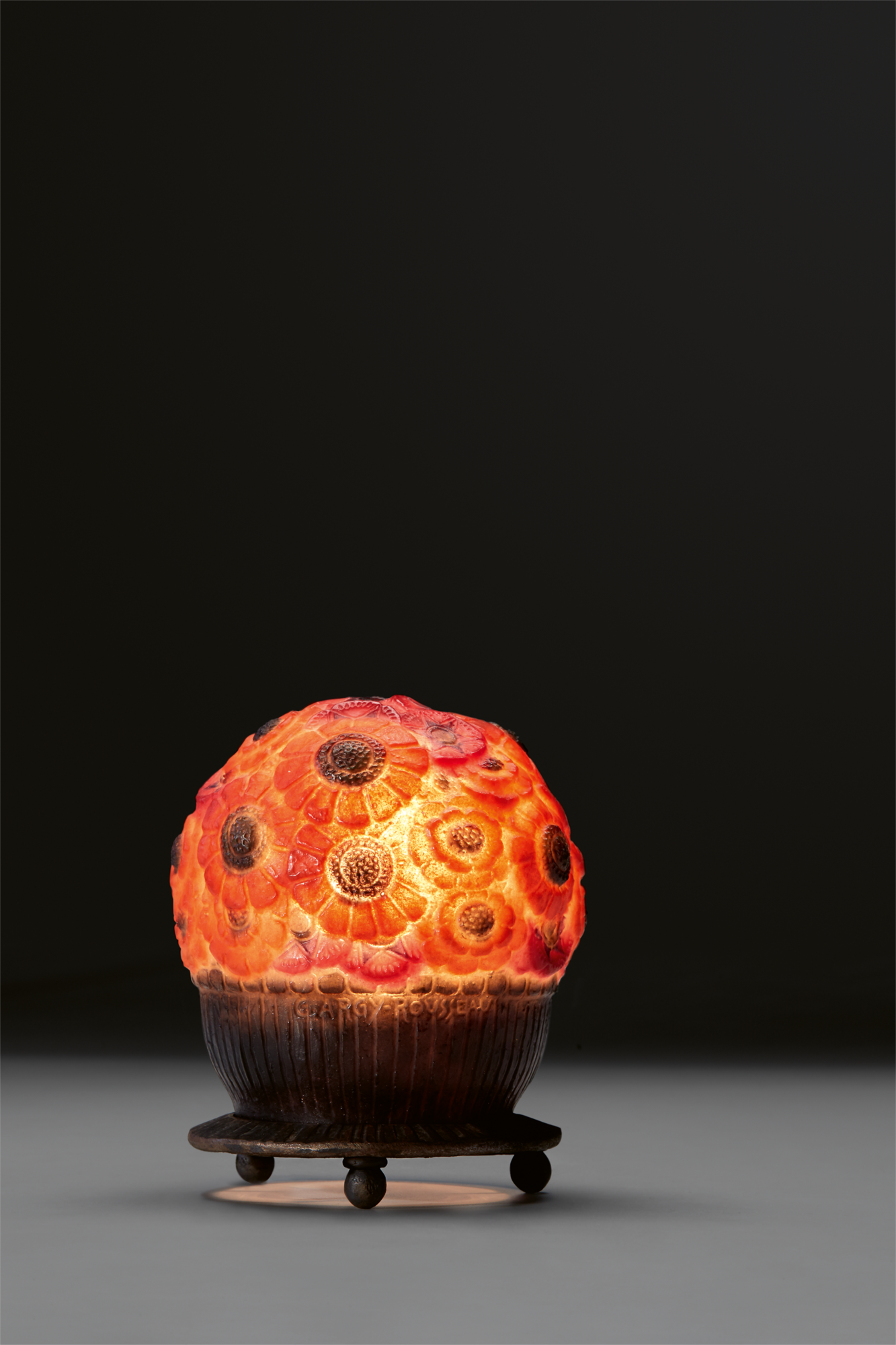 Another glass designer represented in this Collection is Gabriel Argy-Rousseau. Argy-Rousseau gained recognition with his masterful use of the pâte-de-verre technique, using a molded "glass paste" to produce a richness of texture and color. Whereas Gallé's ornamentation is inspired by his interest in botany, Argy-Rousseau mastered his technique through an interest in chemistry and was able to experiment with the blending of color and texture of surface. The thickness of his glass and the rich jewel tones create immensely rich gem-like pieces. Light plays off an Argy-Rousseau nightlight (Lot 28) like the stained glass window of a church, instantaneously revealing a rich layer of color and light. 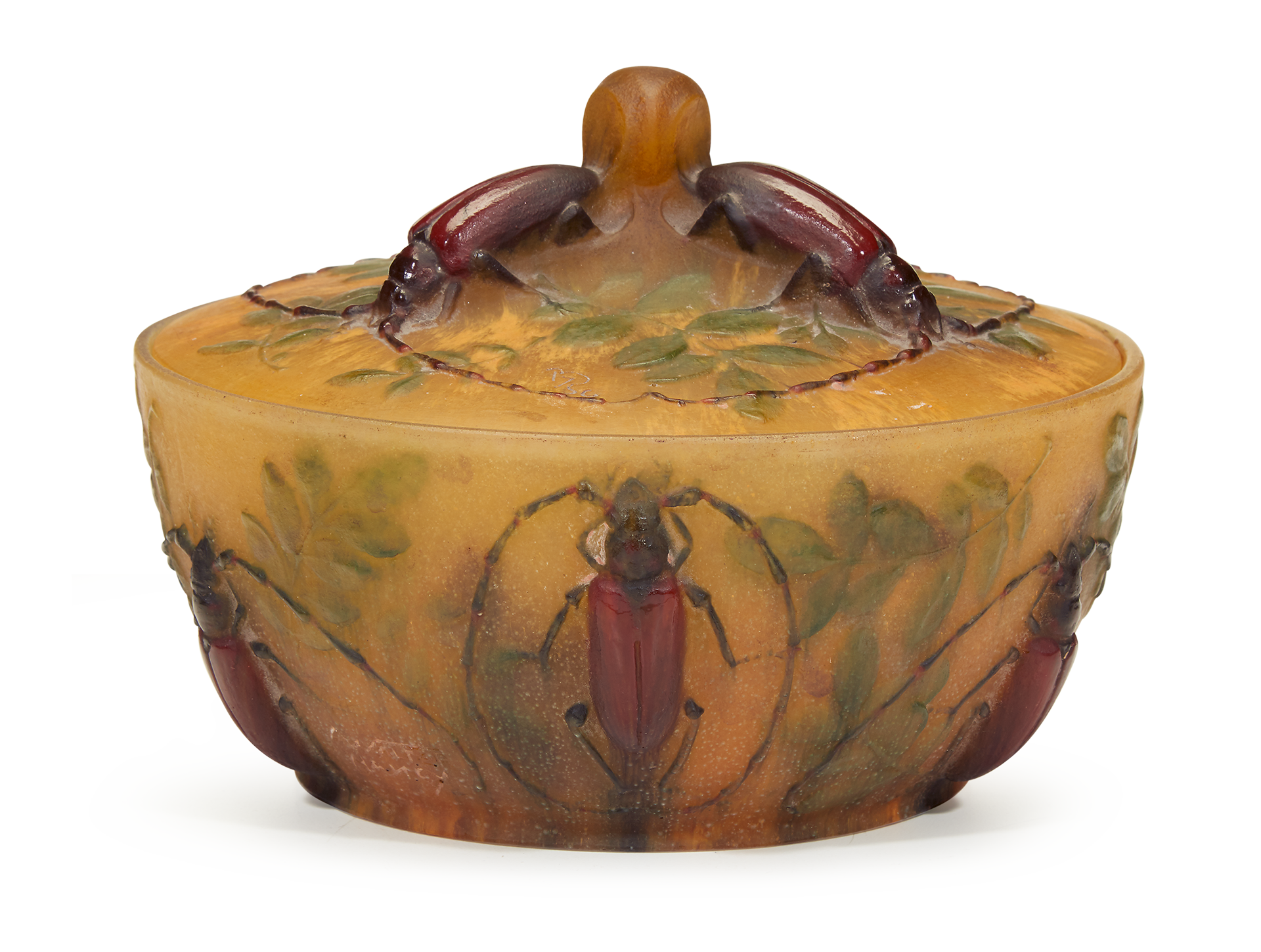 All of these artists were instrumental in one of the twentieth century's most explosive and fleeting decorative art movements. They revealed a social dimension to decorative work, and worked endlessly to ensure the prosperity of decorative art's future. The flowers of the école de Nancy's work are deeply rooted in Lorraine's soil and they have etched, carved, and molded this region's natural beauty and rich cultural history into their work.