The Art of Russian Lacquer: 19th Century Masterworks from the Taylor Collection

An extraordinary collection of over 300 works by the Lukutin and Vishnyakov factories, likely the most comprehensive private collection of Russian Lacquer ever to come to market.

The sale will include boxes, folios, photograph albums, decorative objects, and icons by the most famous prerevolutionary Russian lacquer manufactories. Many pieces are decorated in the pismo po-plotnomu technique–miniature painting in oil–and many of the boxes bear exquisite reductions of some of the most famous Russian paintings of the 18th and 19th centuries, including works by Repin, Makovsky, Rokotov, Kruger, Sverchov, Alexeyev, Vorobyov, Morozov, Venetsianov, and Vereshchagin. An exceptional example of this technique is Lot 283, a casket with a reduction of one of Makovsky's most famous works, "A Boyar Wedding Feast."

Highlights include Lot 27, an exceptional box with a reduction of Alexeyev's "View of the Stock Exchange and Admiralty from the Peter and Paul Fortress" by the Lukutin Manufactory at Fedoskino (etimate $3,000-5,000). This work by an anonymous miniaturist captures all the bravado and élan of the original which earned Alexeyev the title "The Russian Canaletto."

Another masterpiece in miniature is the extraordinary Lot 67, a lacquer traveling box with Napoleonic scenes by Vishnyakov & Sons, painted, unusually, entirely in the round (estimate $2,000-3,000).

Objects include Lot 303 the commemorative photo album commissioned for the launch of the Russian Imperial Cruiser "Boyarin." This unique work was among the last created by the Lukutin Manufactory before its closure in 1904 and features an exceptional lacquer plaque with a reduction of the famous Boyar portrait of Pyotr Potemkin by Sir Godfrey Kneller set within an elaborate carved bone Slavic revival architectural frame (estimate $4,000-6,000).

Perhaps the rarest works include Lot 308 the pair of icon rondels by the Lukutin Manufactory of Fedoskino, depicting the Archangels Mikhail and Gavriil, painted with exceptional delicacy and still mounted in their original giltwood frames (estimate $6,000-8,000). 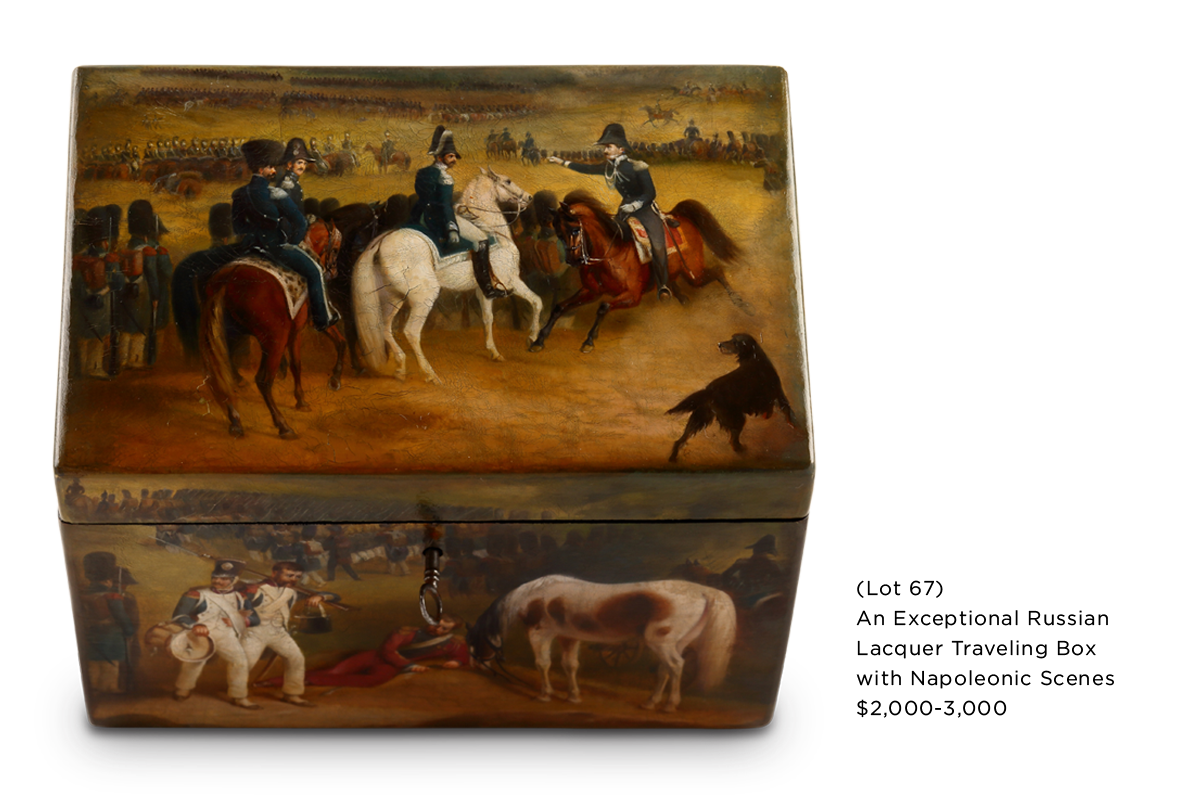 Larry and Mutsue Taylor's love of Russian lacquer began in the late 1960s shortly after their marriage and the couple continued collecting over the next four decades. Their California home featured a custom-built gallery for the display of the works, and they created an important catalog of the collection, illustrating in detail the special artistic character of each piece. Freeman's is honored to make these unique objects available to collectors.