The drawings and watercolors that make editions unique

A guide to the illustrated highlights of Freeman's upcoming Books and Manuscripts selection.

If you’ve ever doodled in the margins of a book, you’re not alone; while the value of the book may not have appreciated over time thanks to your additions, several selections within Freeman’s February 17 Books and Manuscripts auction feature original illustrations that speak to the unique histories of each volume. Offering the best of both literature and art within a single volume, these five lots unlock holistic pleasures for bibliophiles, art collectors, book-underliners, and those who relish a dynamic relationship with their reading material. 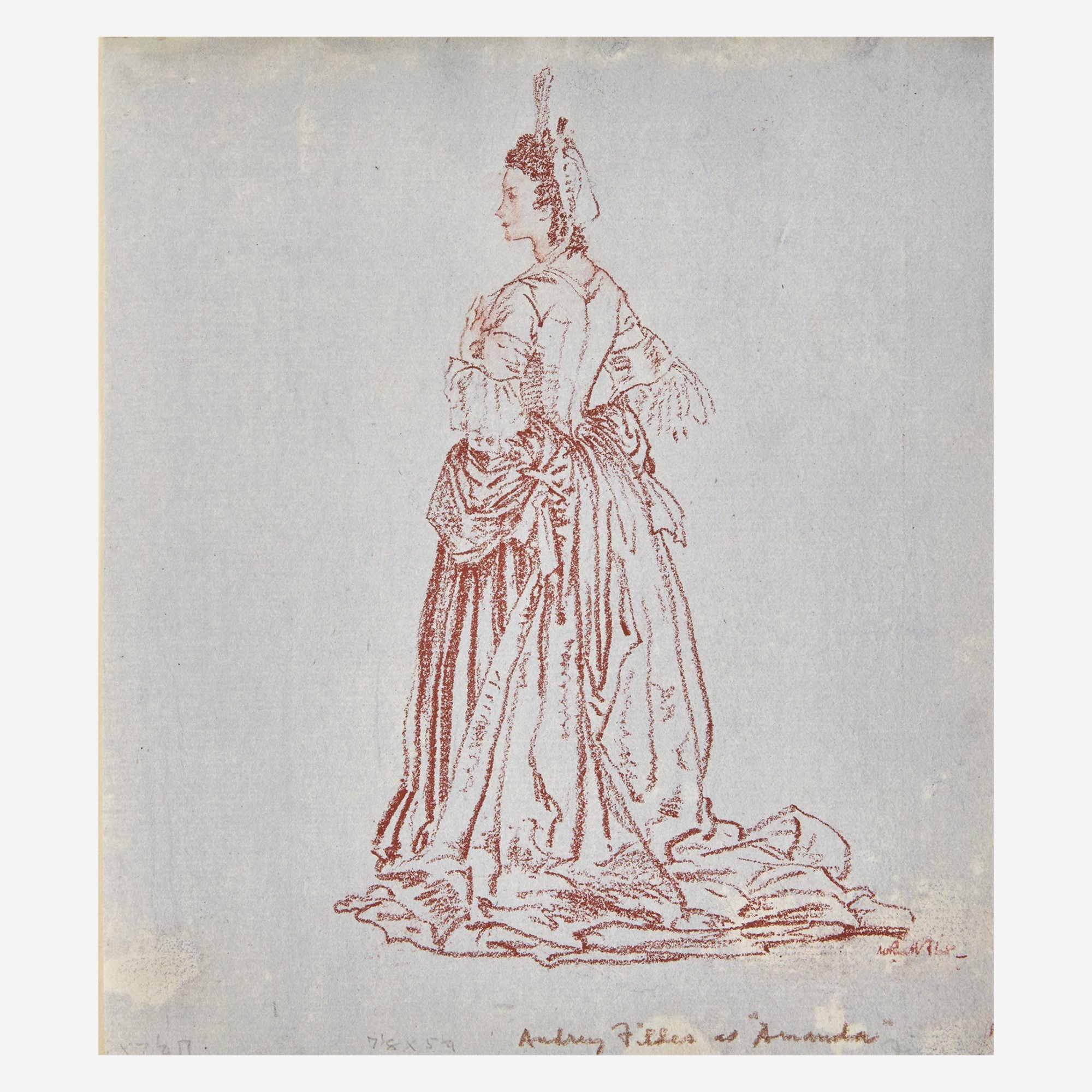 Scottish artist and illustrator Sir William Russell Flint (1880-1969) is best known for his sweeping, romantic watercolor works—part portrait, part landscape—like his Portrait of Isobel that sold for $27,500 at Freeman’s in 2013, which framed its subject against a seascape rendered in an elegant palette of tans, browns, and blues. However, Flint’s artistic output was also deeply embedded in the world of books: a short story author himself, the artist also produced illustrations for books like The Medici Society’s 1913 edition of The Canterbury Tales.

On offer in Freeman’s February 17 sale is a first and limited edition of Flint’s Drawings, including an original drawing rendered in red conté crayon by Flint of British actress Audrey Fildes (Lot 59; estimate: $600-900). An edition like the present example, including both Flint’s signature and an original drawing, offers a unique opportunity to collect a volume full of marks of the artist’s hand. 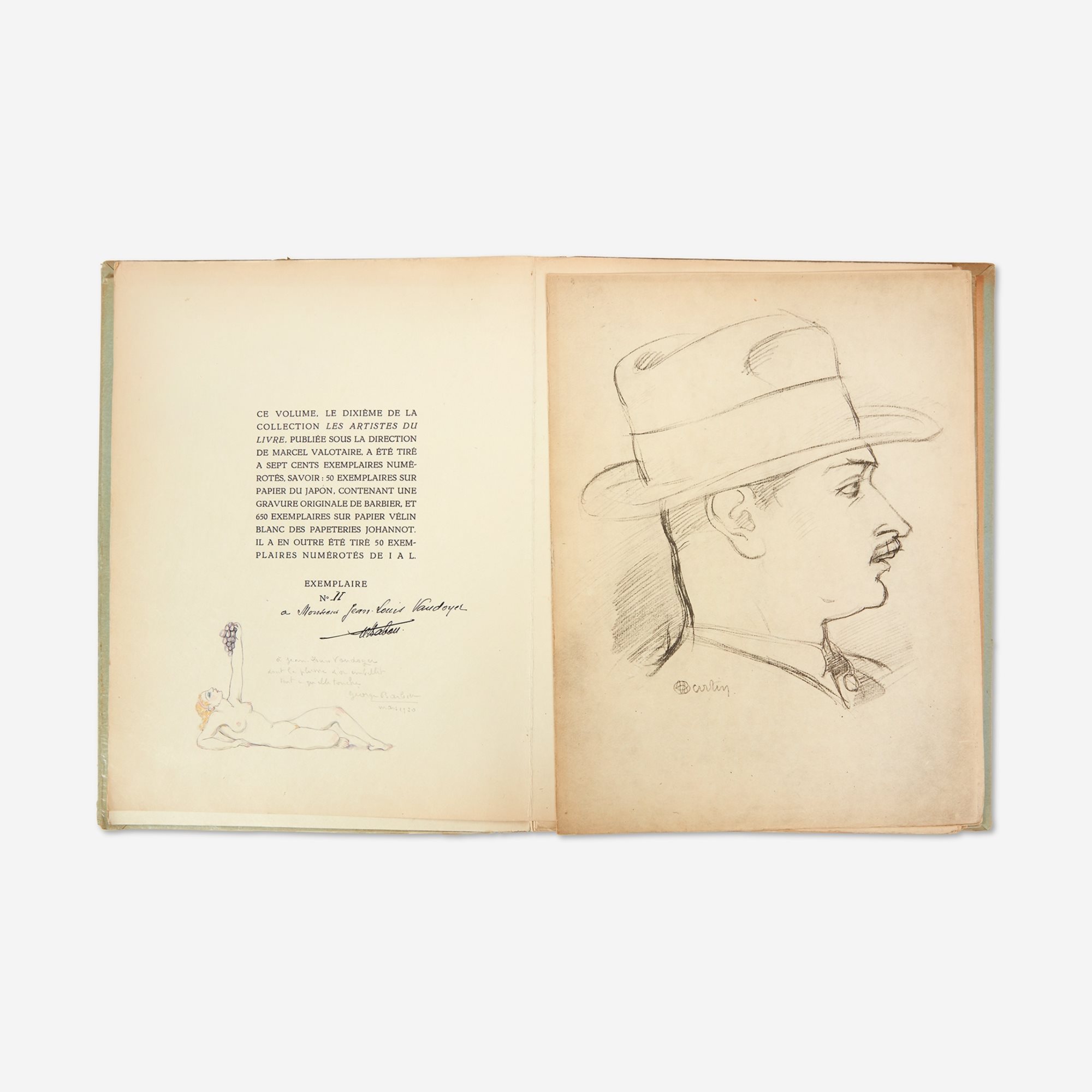 Published by Henry Babou in Paris between 1928 and 1933, Les Artistes du Livre was a deep dive into the works of twenty-four French illustrators, with each issue devoted to an individual artist. On offer at Freeman’s is a complete set of twenty-five volumes (with a duplicate of issue 20), a first and limited edition sure to please collectors of illustrated material (Lot 50; estimate: $1,500-2,500).

Not only is it rare to find a complete collection of the Les Artistes du Livre magazine—which includes issues dedicated to the works of George Barbier, Pierre Brissaud, Paul Jouve, and Jacques Touchet, among others—but issue 10 of this collection includes both an inscription by the publisher to the French historian Jean-Louis Vaudoyer and an original sketch and inscription by Barbier. The inscription and drawing (a nude woman in repose, dangling a bunch of grapes overhead) makes this particular collection, already a rarity, utterly unique.

3. Laurence Sterne's A Sentimental Journey Through France and Italy 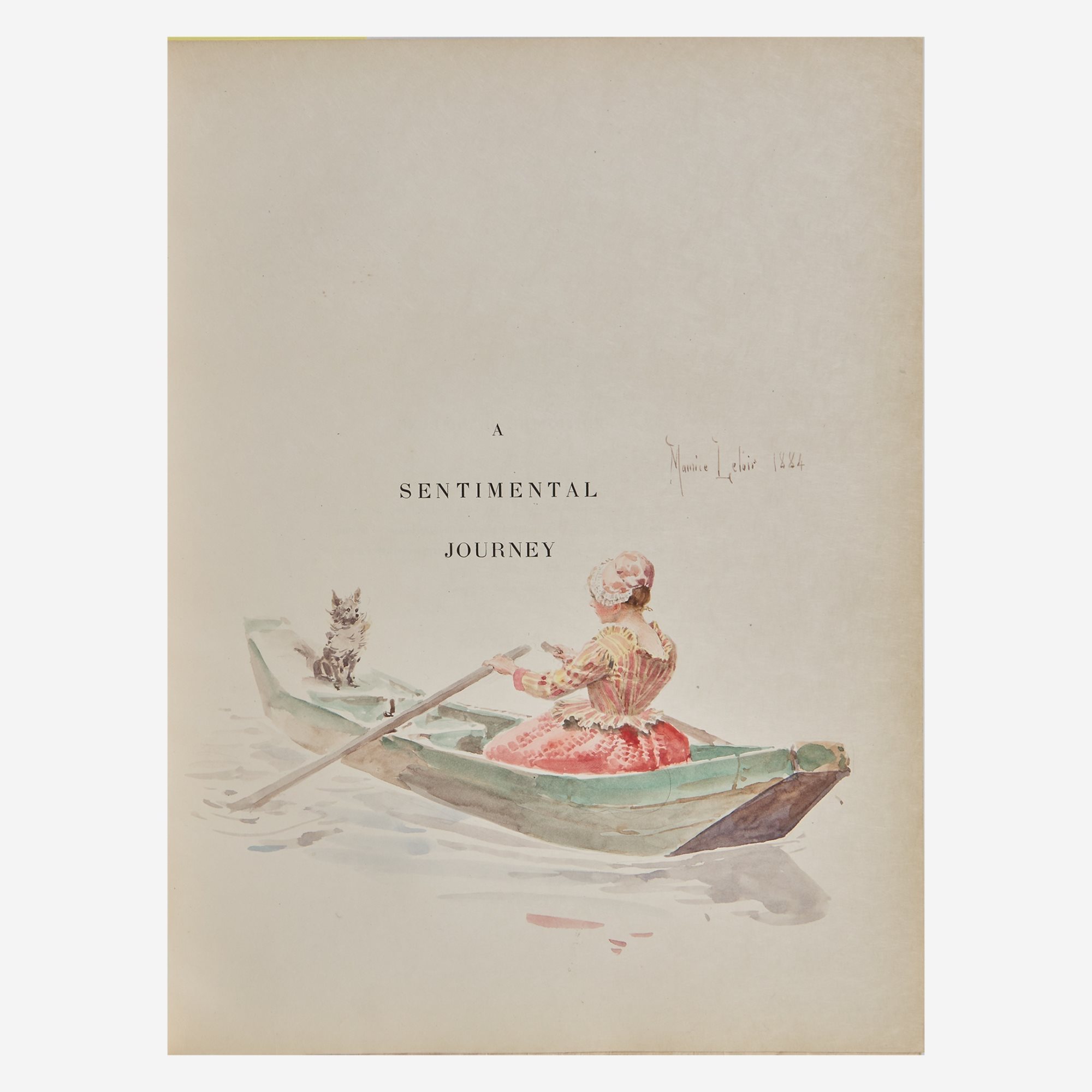 Several illustrated editions on offer February 17 are works from the collection of David Allen Fraser (1911-2003), a bibliophile and longstanding member of the Grolier Club, the nation’s oldest and largest bibliophile society, that boasts a library in New York City of over 100,000 titles.

Fraser’s impressive collection includes gems that will fascinate and delight fellow booklovers, like a beautifully illustrated first and limited edition of Laurence Sterne’s A Sentimental Journey Through France and Italy (Lot 61; estimate: $500-800). Published in New York in 1884, this edition features an original watercolor illustration by Maurice Leloir on the book’s half-title page; befitting the novel’s focus on an Englishman’s travels abroad, the illustration depicts a young woman and her canine companion rowing through the placid water. At the time of their publication, editions like the present example would have been doubly attractive to both readers of Sterne and admirers of the art of Leloir, who notably also illustrated an edition of Alexandre Dumas’s The Three Musketeers (Lot 85; estimate: $400-600). 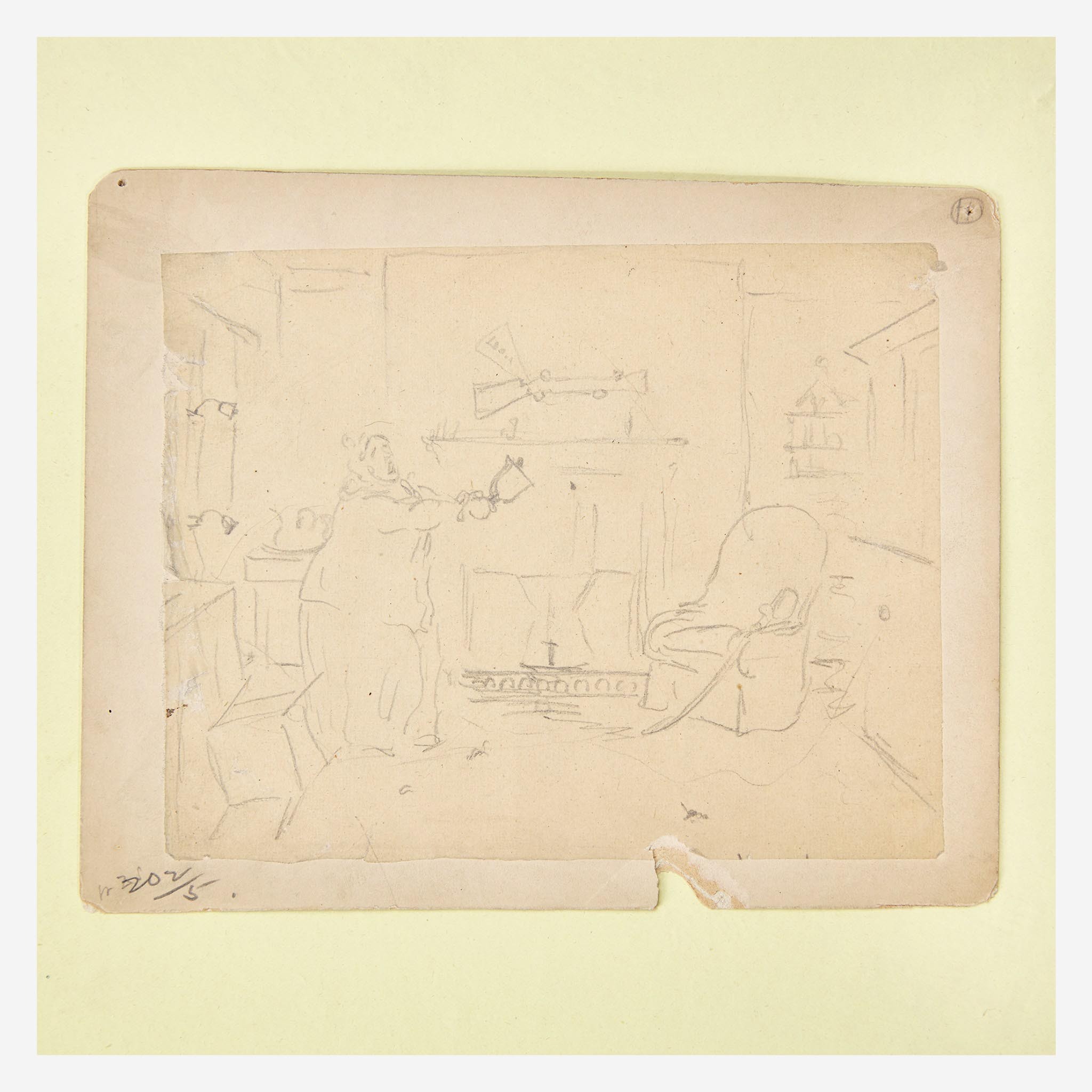 Part of what makes collecting books and manuscripts so exciting is that these are objects meant to be used, shared, and interacted with—and each owner writes part of the edition’s ongoing history. The present first and limited edition of David Croal Thomson’s 1885 Life and Labours of Hablot Knight Browne “Phiz” is an excellent example of this dynamic; an original pencil drawing by the book’s subject, Hablot Knight Browne (whose pen name was “Phiz”), accompanies the book.

Whereas illustrations like Maurice Leloir’s watercolor were executed within the pages of the book itself, Phiz’s signed pencil drawing of a domestic interior was likely made in a sketchbook and pasted to the front of the book after publication. Both art and literature in one, this edition of Life and Labours (Lot 52; estimate: $600-900) is a testament to the collaborative nature of collecting.

5. Oliver Wendell Holmes's Dorothy Q Together with A Ballad of the Boston Tea Party & Grandmother’s Story of Bunker Hill Battle 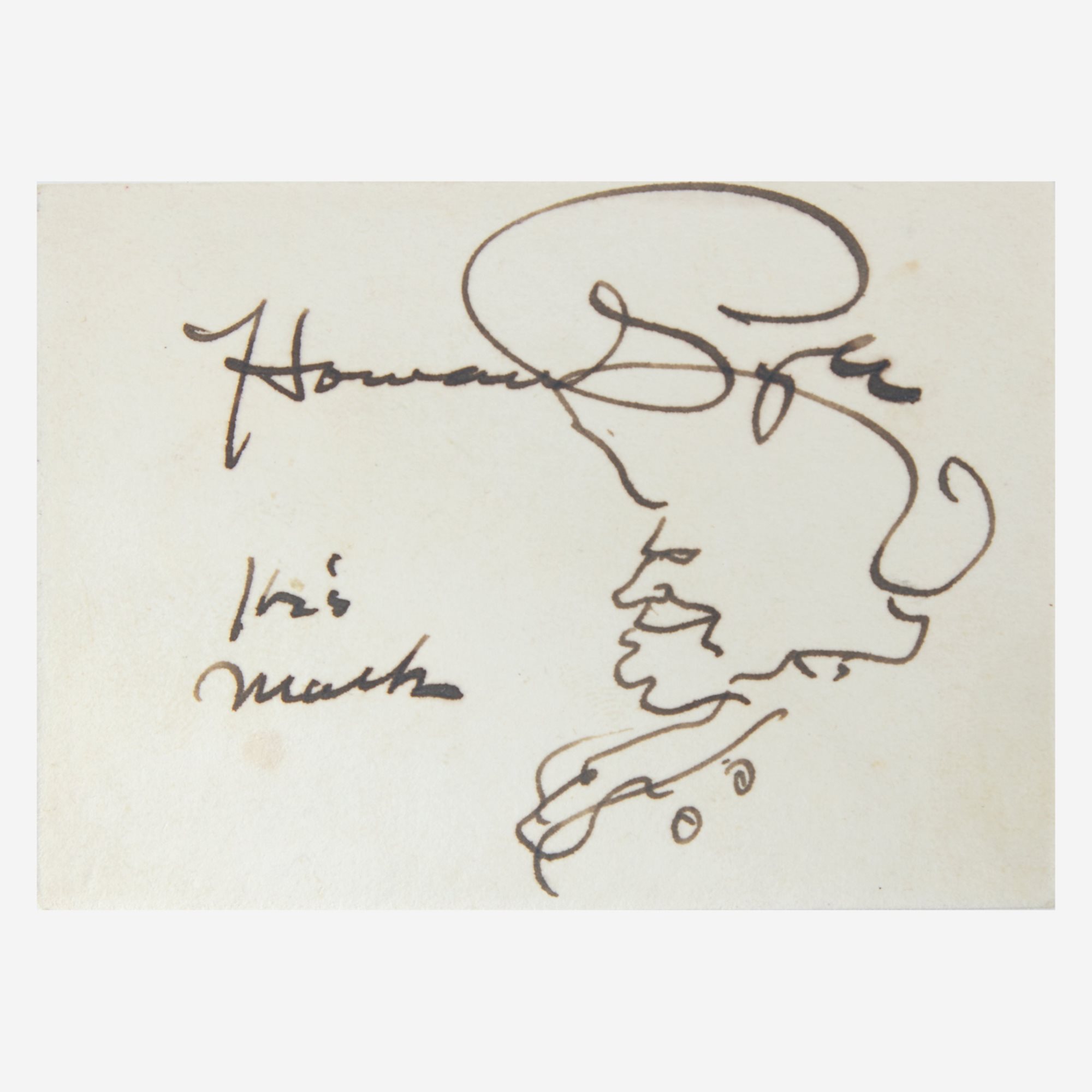 Among the giants of American illustration art, Howard Pyle stands tall: by 1894, he had established the nation’s first illustration school at Philadelphia’s Drexel University, and his students and mentees include such luminaries as N.C. Wyeth, Jessie Willcox Smith, and Arthur Becher. Pyle’s work would have been well known by the time Oliver Wendell Holmes’s Dorothy Q Together with A Ballad of the Boston Tea Party & Grandmother’s Story of Bunker Hill Battle was published, in 1893 (Lot 64; estimate: $400-600).

The first and limited edition, illustrated by Pyle, includes a small card illustrated and signed by Pyle, with the words “his/mark” alongside. The card, which features a gestural ink portrait of a man in profile, was likely the result of an admiring fan’s request for an autograph. This keepsake ended up within this edition of Dorothy Q; like the “Phiz” drawing before it, this small piece of history adds richness and complexity to the ongoing drafting of this particular book’s history.

View the rest of our February 17 Books and Manuscripts auction.