On November 6, Freeman's will host its autumn Fine Jewelry auction, an elegantly assembled sale featuring 160 lots of antique and modern designs. With diamonds, rock crystal, and gemstone jewels, signed pieces by Van Cleef & Arpels, Cartier, Tiffany & Co., Buccellati, and Seaman Schepps, as well as timepieces by Patek Philippe and Rolex, the auction offers something for every collector.

An exceptional highlight is Lot 147, a rare fancy blue diamond, weighing 1.17 carats, within a pavé-set platinum and diamond mount (estimate: $200,000-300,000). The present lot comes from the collection of a Kansas City gentleman, by descent from the collection of Robert Spratford. Spratford spent his life immersed in the world of fine jewelry, first working for a jeweler in South Dakota, and later a watchmaker in Virginia. In the 1940s, Spratford became an instructor at the Gemological Institute of America, and in 1949 joined C.A. Kiger, a family-owned diamond cutter and importer based in Kansas City, Missouri, where he worked continuously at providing ideal-cut diamonds to the jewelry industry. The diamond's fancy blue color is at once delicate and remarkable. 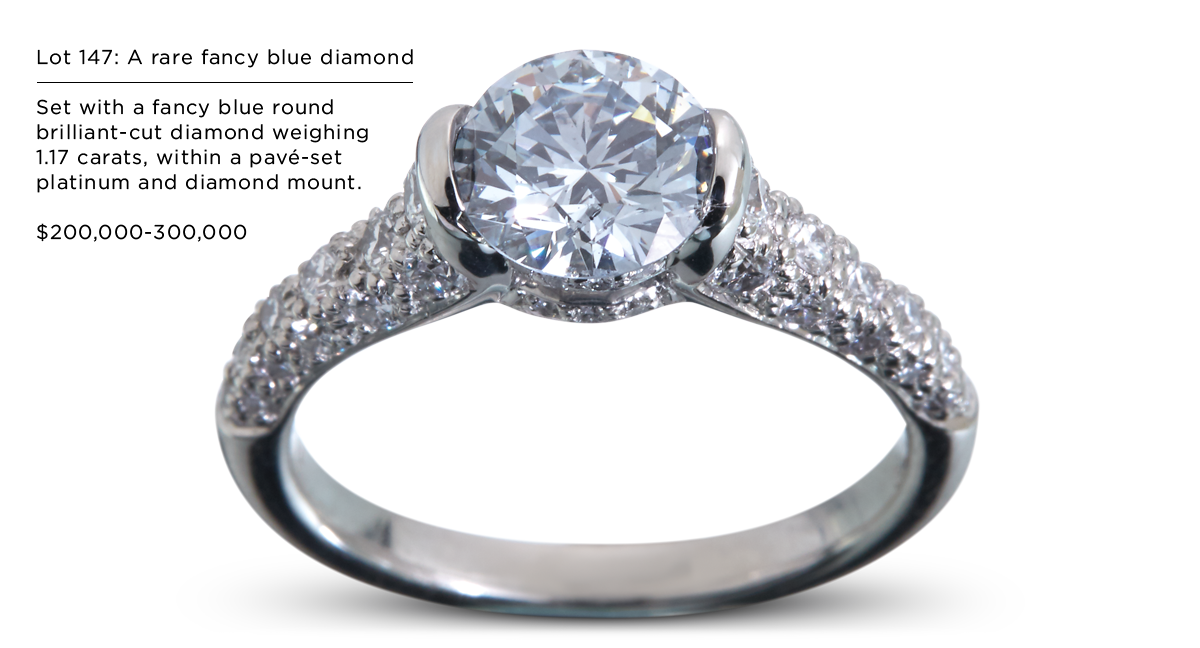 From the collection of a Princeton Lady comes a stunning diamond rivière necklace (Lot 145, estimate: $70,000-90,000). Comprised of a graduated line of approximately 11.63 carats of round brilliant-cut diamonds, alternating with straight baguettes, and completed the back with a line of nearly 12.00 carats of old mine-cut diamonds, the necklace is mounted in 18 karat white gold, and is an impressive statement piece for the discerning buyer.

The auction also includes one dozen pieces by Seaman Schepps, all from the collection of a Philadelphia Lady. Born in New York City in 1881, Seaman Schepps created an eponymous jewelry house, becoming "America's Court Jeweler" for his unique, bold designs, worn by the country's most prominent society families. Schepps was interested in shapes and the rather unorthodox mixing of semiprecious colored gemstones, which, while not necessarily extremely valuable, were prized by the artisan for the whimsical designs they yielded. Katharine Hepburn, Coco Chanel, and Andy Warhol, and the Mellon and Rockefeller families were among his notable clientele. Highlights in the auction include a rare jadeite jade, rock crystal, emerald and 18 karat gold Snuff Bottle bracelet (Lot 144, featured above, estimate: $8,000-12,000), and a rock crystal and 18 karat gold Chessman bracelet (Lot 143, estimate: $8,000-12,000), accented by carved rubies sapphires and set with cabochon emeralds and sapphires, further accented by fresh water pearls. Lot 118 is a gem-set diamond, and 18 karat gold Rio design bracelet (estimate: $8,000-12,000) set with gemstone cabochons including citrine, pink tourmaline, and rose quartz. These are rare, bold examples of Schepps' work. 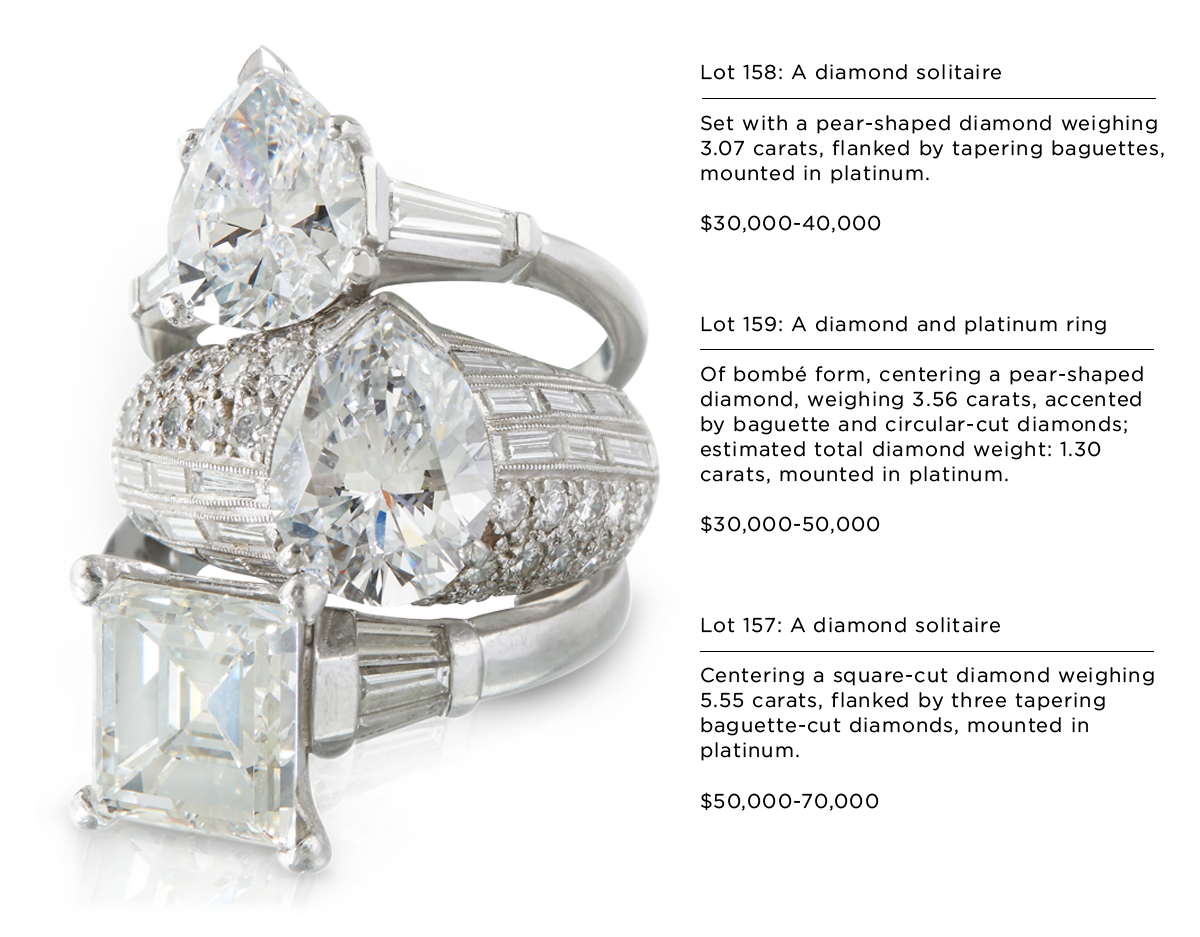 Hailing from Burma, now known as Myanmar, Burmese rubies are among the finest gemstones of their kind, as well as the most rare. Burma rubies play a starring role in the November 6 auction, with half a dozen on offer. Lot 152, a ring centering a Burma ruby cabochon, weighing approximately 13.20 carats, accented by triangular-cut diamonds, is of particular interest (estimate: $30,000-50,000). Lot 47, a Burma ruby, diamond, and 18 karat white gold ring, centering an emerald-cut ruby weighing 2.43 carats (estimate: $15,000-20,000), and Lot 106, a Burma ruby, diamond, and platinum ring, are other spectacular examples (estimate: $15,000-20,000). All are accompanied by AGL reports, indicating no evidence of heat treatment. 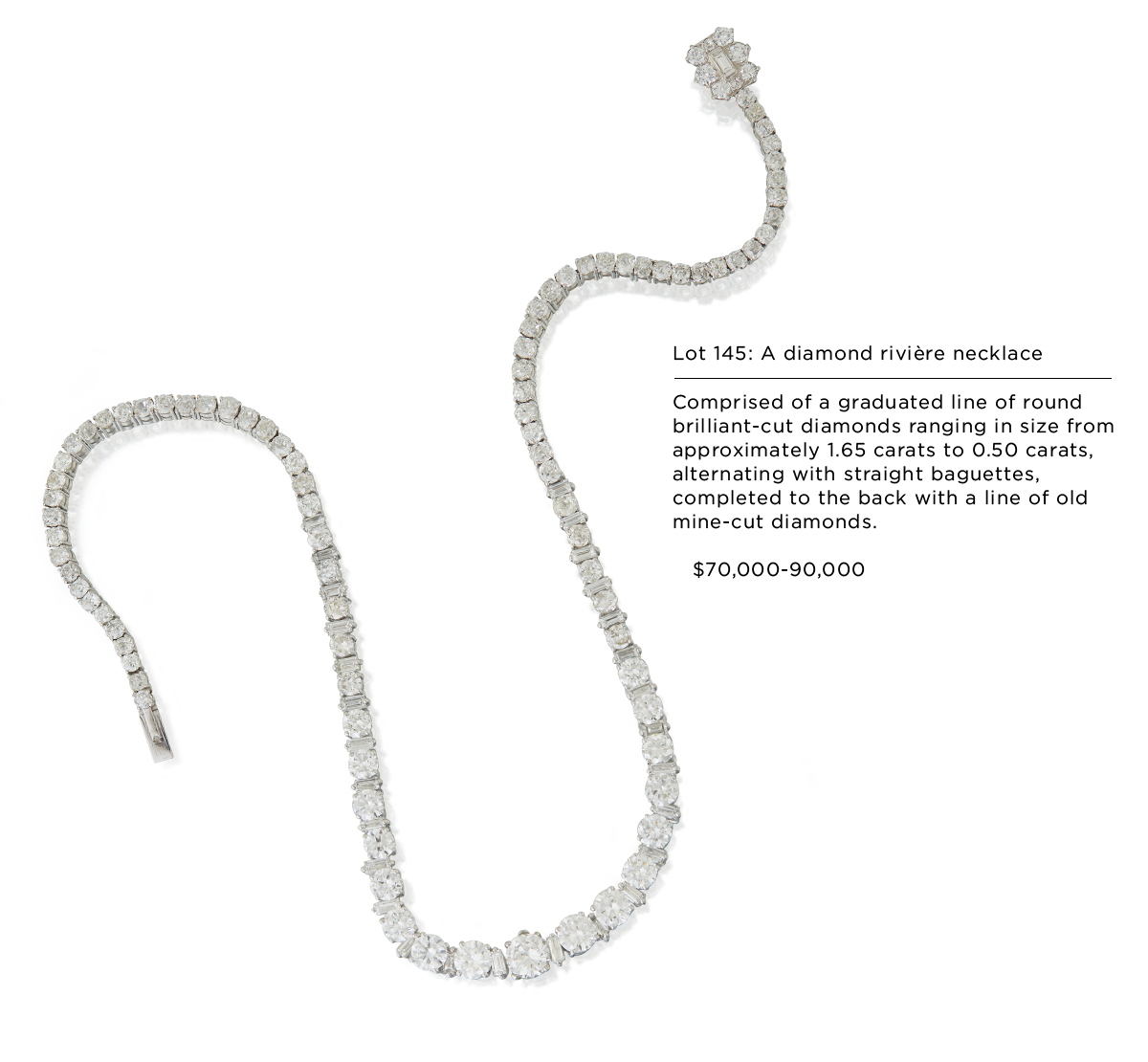 There are also several pieces by Elizabeth Locke, gemstone jewels, natural and cultured pearl necklaces, and Art Deco and Edwardian bracelets and brooches.

Highlights from the Fine Jewelry auction will be exhibited in London October 9 and 10, as well as Freeman's Wayne, PA gallery October 10-12, both by appointment only. The complete sale will be exhibited in Beverly Hills October 18 and 19, and in New York October 23 and 24, both by appointment only. A full exhibition will be hosted at Freeman's Philadelphia headquarters beginning November 2.