A Bucks County Life: The Collection of Bonnie O 'Boyle

On December 10, 2018, Freeman's will present at auction A Bucks County Life: The Collection of Bonnie O'Boyle, a single owner sale exhibiting the eclectic taste of the local philanthropist who surrounded herself with Pennsylvania art, craft and design in her historic farmhouse in Doylestown. This auction will be bookended by Freeman's seasonal American Art & Pennsylvania Impressionists and Design auctions, occurring on December 9 and 10, respectively.

Bonnie was truly a Renaissance woman, one who was ahead of her time, and whose many passions defined her life. Born in Bristol, PA, Bonnie graduated Valedictorian from local boarding school Eden Hall in 1963, before attending the University of Pennsylvania, where she graduated Magna Cum Laude. An accomplished journalist, she worked for more than two decades for various boating publications beginning in 1980 as an associate and managing editor. In 1985, she co-founded Power & Motoryacht magazine, which held the distinction of being the first qualified-circulation consumer publication in the boating industry. She defied convention, by becoming the first female editor-in-chief of a boating magazine while at Power & Motoryacht. Bonnie often remembered her time spent with Mr. Malcom Forbes, the well-known publisher of the Forbes magazine. He is the one who provided her with the words she lived by: "Life is not a dress rehearsal." An active member of her beloved Bucks County community, Ms. O'Boyle was a generous benefactress, giving her time to several art and community organizations, including the James A. Michener Art Museum, the Friends of Silver Lake Nature Center, and the Bucks County SPCA. She collected across categories that spoke to her deep and varied interests, namely nature, animals, and colors. Comprised of both impactful and whimsical items, her collection demonstrates her artistic and intellectual curiosity. It also serves as a reminder of her remarkable personality – warm, adventurous and strong. "Bonnie's enthusiasm for a diversity of life experiences is echoed in the tangible compositions she gathered around her; vibrant, well-crafted, thought-provoking, evocative of an era, and reflective of a curious mind," remarked Lisa Tremper Hanover, (Retired) Director/CEO, James A. Michener Art Museum. 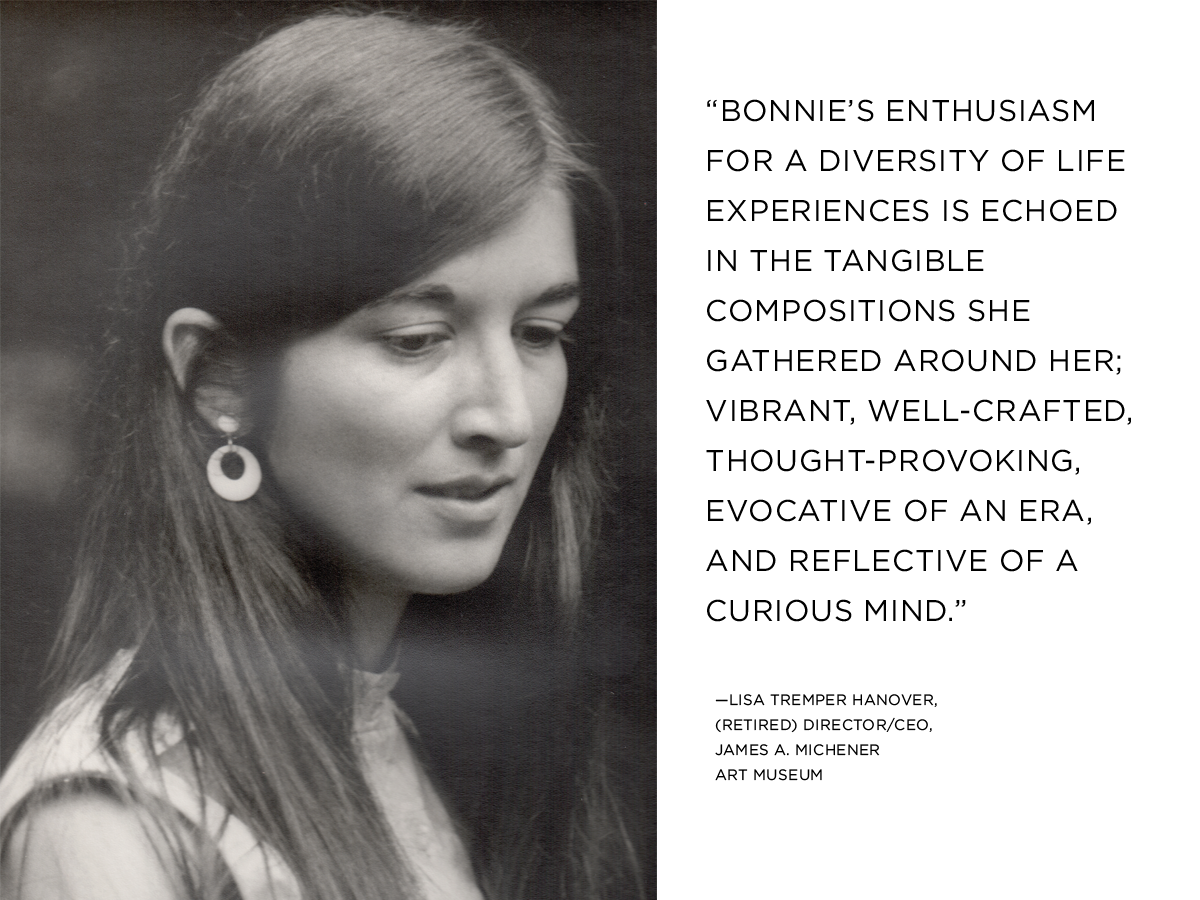 Pennsylvania Impressionism
The first portion of the sale comprises a group of works by Pennsylvania Impressionists, including paintings and drawings by Harry Leith-Ross, Walter Elmer Schofield, John Folinsbee and others, many of which Bonnie acquired at Freeman's. All capture the quiescent and bucolic beauty of the region of New Hope, to which Ms. O'Boyle was attached. Highlights include two landscapes by William Lathrop and Kenneth Nunamaker, both painted "en plein air" and composed of a thickly layered impasto with a soft but rich and well-blended palette. While the former is considered the Founder of the Pennsylvania Impressionist School and served as a mentor to many of the artists who flocked to New Hope, the latter artist was strongly influenced by the paintings of Edward Redfield, who took the young artist "under his wing" to teach him the principles of light and color. With his dazzling winter scene set along the Delaware River, Edward Redfield indeed proves his talent at capturing the changing effects of sunlight onto the canvas through his vigorously bold brushwork and rich impasto.

Other highlights include Rae Sloan Bredin's "May Day," a charming spring landscape recently exhibited at the James A. Michener museum, which features an elegant group of women and their daughters in the shadows of a blooming cherry tree, as well as Robert Spencer's 1931 "Night Life," which depicts a group of male and female workers about to enjoy a night out. Here, Spencer favors subdued tones and employs a bolder palette than some of his contemporaries. Spencer was interested in figurative subject- matter, but instead of painting familiar individuals, he often preferred to depict anonymous members of a crowd. 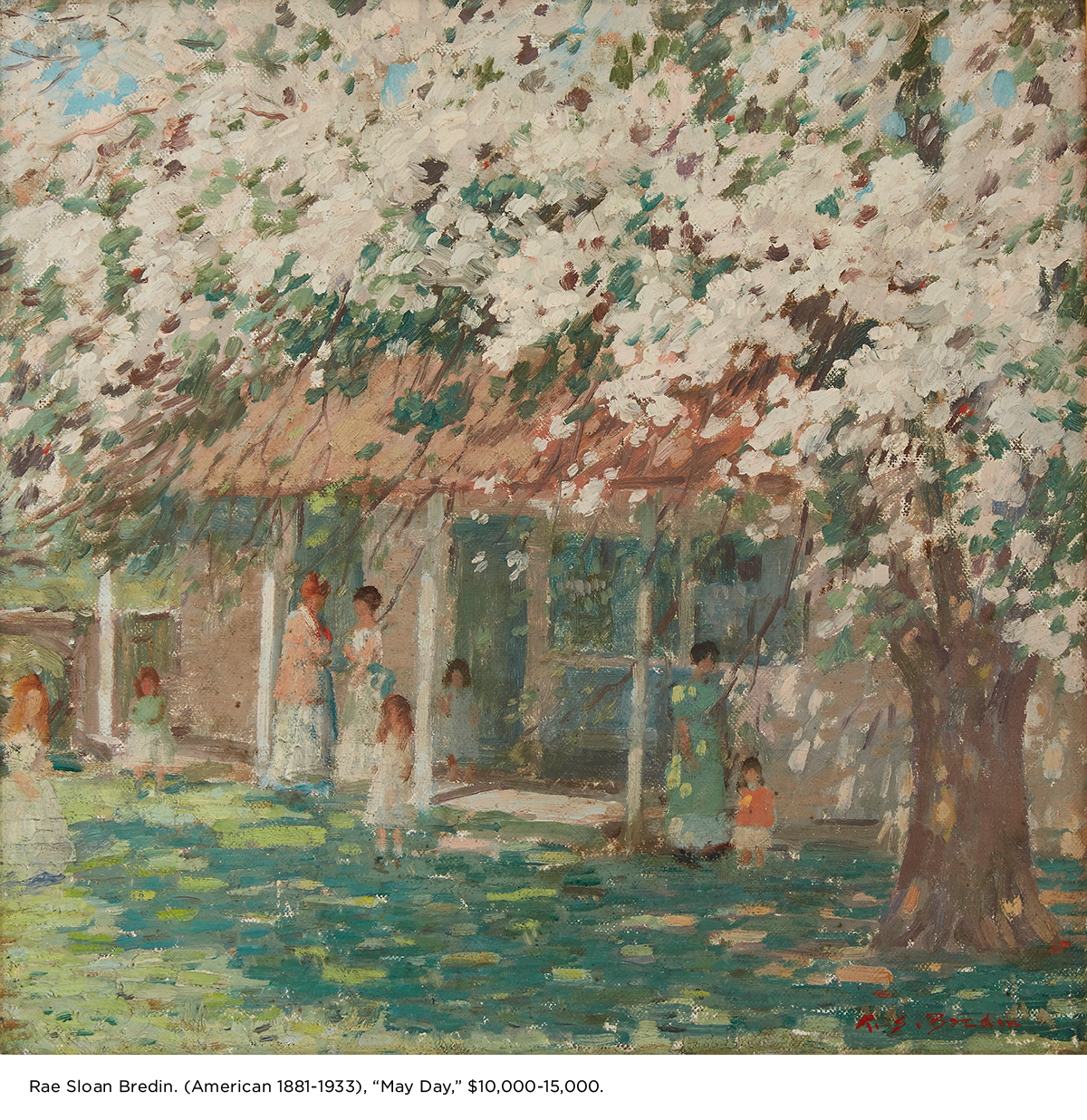 Modern & Contemporary Art
Ms. O'Boyle's bold taste is also reflected in her impressive collection of Modern & Contemporary paintings. It contains an array of paintings and sculptures by American artists of the 20th century such as Louise Nevelson, the pioneer of installation art in the 20th century. Ms. O'Boyle owned two of her well-known wooden sculptures painted in monochromatic black, which she acquired from Pace Gallery in New York City.

Bonnie's appeal for chromatic expression is also mirrored in the work of Op Art artist Richard Anuszkiewicz, "Untitled VIII", which showcases the artist's concern with the optical changes caused by intense colors applied in similar geometric shapes. Similarly, Carroll Cloar's "The Big House in Big Flat" and Cristina Vergano's "Waiting for the Rain", showcase O'Boyle's ongoing fascination for visual experimentation, often of a Surrealist nature, which she explored through the two artists' take on American Folklore, Southern landscape and childhood memories.

Pennsylvania Craft & Design
The Design section of the sale includes works by preeminent American studio woodworkers including Wharton Esherick, George Nakashima, Sam Maloof, Arthur Espenet Carpenter, and others. Of note is a fine music stand in cherry, one of the most iconic works by the "Dean of American Craftsmen," an example of which is held by the Metropolitan Museum of Art. Also worthy of mention are the Conoid bench by George Nakashima and the Wishbone chair by Arthur Espenet Carpenter, both lauded examples of each artist's prevailing style. A rich selection of high-fired ceramic works by the late Benedictine monk, Brother Thomas Bezanson, and artist-turned-potter, Toshiko Takaezu add rich texture to the collection with porcelain bowls and vases in a dazzling array of expressionistic glazes.

The whole of the collection exhibits a strong interest in artistic perfection achieved through simplicity in the manipulation of clay and wood, with many works having strong connections to the Bucks County region and the surrounding Pennsylvania and New Jersey landscapes. "Bonnie's collection grew to be a living, breathing extension of her inner mind. What started as a love of ancient artifacts and antiques grew into a passion for whimsical fantasy of detail and precision. She had a personal relationship with every piece she selected for her collection. She also developed strong bonds with many artists in the Bucks County community," recalls Bonnie's sister, Valerie Shartle.