The 1607 establishment of Jamestown, the first permanent English settlement in North America, was a central event the adventurous life led by Captain John Smith (1580-1631). Thrust unexpectedly into a position of leadership in the new Virginia Colony, and thereby responsible for the procurement of desperately needed food and supplies, Smith undertook a series of now-legendary expeditions into the uncharted American interior. 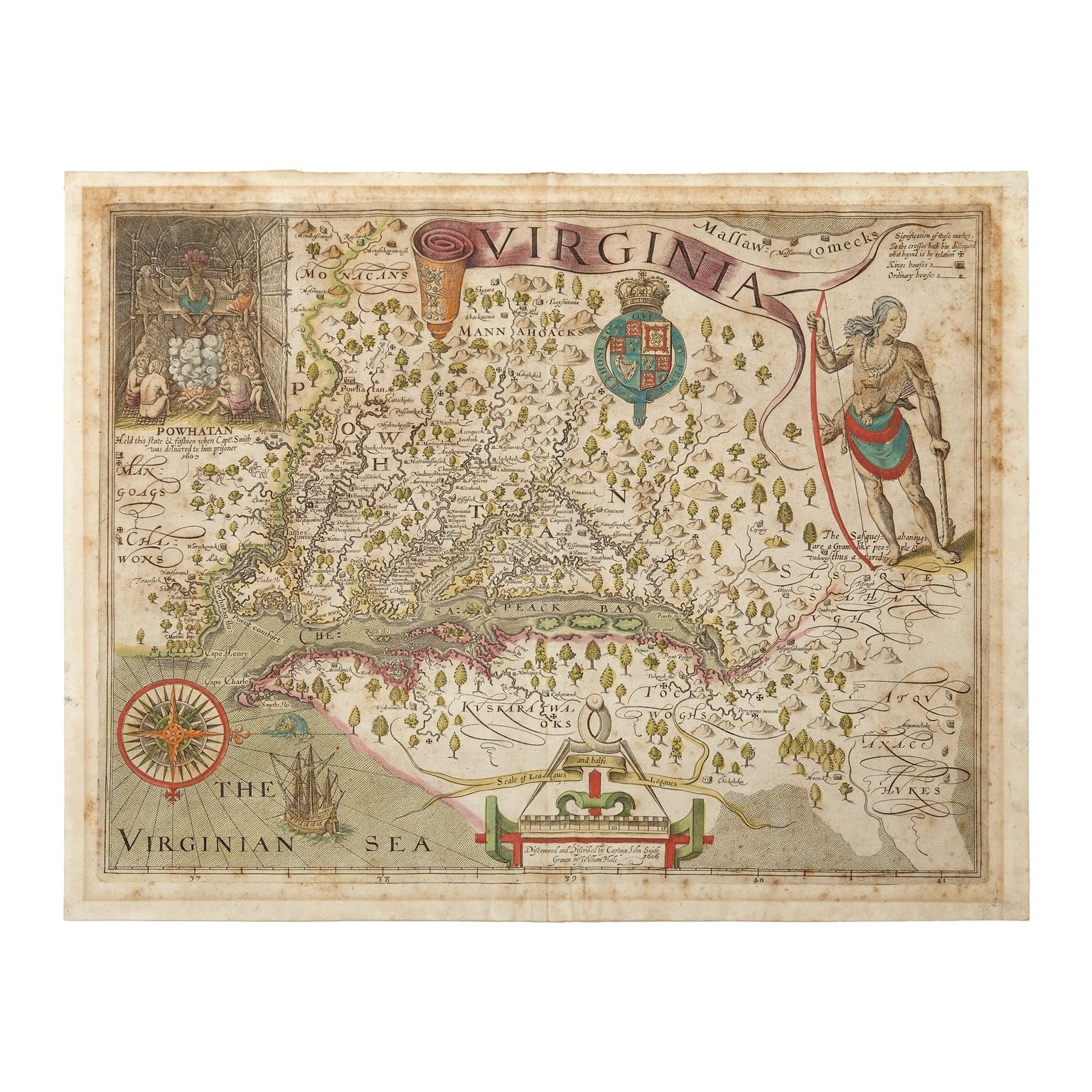 Freeman's brought this exciting chapter of American history to auction with a rare 1612 map of Virginia by Captain John Smith in a 2015 Books, Maps & Manuscripts auction. Between September 1608 and August 1609, Smith's explorations led him up the coastal rivers of Virginia and deep into the Chesapeake Bay. As the first English explorer to survey these waterways, he appropriately published the first map of Virginia in 1612, capturing thereby a precarious moment at the dawn of English settlement in the New World.Smith was aided in his surveys by Native Americans, who were able to supply information regarding remote or hostile districts which he was himself unable to visit. Thus, in addition to local topography, his map records in detail the location of 166 Native American villages in the region. It provides other ethnographic details, as well: a vignette, upper left, illustrates the paramount Powhatan chief, perhaps even the father of Pocahontas, presiding over an assembly in his community's longhouse. A personification of the now-extinct Susquehanah tribe, armed with requisite war club, bow, and arrows, is also depicted upper right.

Contemporary archaeologists continue to consult Smith 's work in order to locate the village sites of vanished Native American tribes, and historians and cartographers similarly agree that it ranks among the most important and influential maps of America. In its own time, the map inspired much interest in the fledgling Virginia Colony, and it served as the prototype for subsequent maps of the area. Many mapmakers, principally in the Netherlands, but also on the Continent, produced facsimiles of Smith's map during the 17th and early 18th centuries. Examples of the original issues, which were printed in England by William Hole beginning in 1612, are extremely rare. Freeman's was honored to offer this hand-colored and engraved map, "Virginia, Discovered and Discribed by Captayn John Smith, Graven by William Hole," London, 1612, which bears all of the attributes of Hole's second state of 1612 [Burden 164], and which achieved $33,750, more than doubling its pre-sale high estimate.