Can Norman Rockwell 's Heirs Block a Museum from Selling His Works?

The heirs of artist Norman Rockwell requested the Massachusetts Superior Court grant a preliminary injunction prohibiting the Trustees of the Berkshire Museum from auctioning the artworks in an upcoming auction.

The Mission of the Museum
The Berkshire Museum was founded in 1903 by philanthropist Zenas Crane who donated a building to hold and display art and artifacts for the benefit of the public. The Museum was incorporated in 1871 as a library with the statutory authority to provide "reading-room, lectures, museums, and cabinets of art and historical and natural curiosities." The Act further stated that "no part of such real and personal property, or such gifts, devises or bequests, shall ever be removed from the town of Pittsfield."

The Act created a corporation "for the purposes of establishing and maintaining in the city of Pittsfield an institution to aid in promoting for the people of Berkshire county and the general public the study of art, natural science, the cultural history of mankind and kindred subjects by means of museums and collection, with all the powers and privileges . . . set forth in all general laws now or hereafter in force relating to such corporations." The Act establishing the Museum as a separate legal entity didn't include language prohibiting its property from being removed from Pittsfield. However, it did have language that any gift or bequest would be "used in conformity with the conditions made by any donor and expressed in writing provided, that such conditions are not inconsistent with the provisions of this act."

The Museum Falls on Hard Times
The Berkshire Museum suffered from poor economic conditions and was in serious financial trouble. It operated at a deficit for many years causing it to rely on its endowment to sustain its operations. To address their financial issues, the Trustees considered the issue of deaccession as a possible option. The Board discussed the potential items for deaccession, moved forward with this method of financing and later set a timeline for the proposed deaccession. Over the course of two years, the Trustees held numerous meetings regarding the economic future of the Museum.

In May 2017, the Board approved a consignment agreement with Sotheby's. The proposed auction included 40 items-two of which were works of famous artist and Berkshire County resident Norman Rockwell. The paintings, "Shuffleton's Barbershop" and "Shaftsbury Blacksmith Shop," personally donated by Rockwell to the Museum are considered his finest works, and their value is in the millions.

The plaintiffs were three of Rockwell's children and all were principal beneficiaries of his estate through testamentary trusts. They claimed breach of fiduciary duty, breach of trust, and absence of authority. The Rockwells asked the court to void the contract with Sotheby's, and enjoin the Museum from deaccessioning the 40 items for sale.

The defendants were the Trustees of the Berkshire Museum and the Massachusetts Attorney General. The legal issue before the court was whether the plaintiffs were entitled to a preliminary injunction enjoining the Museum from selling or otherwise disposing of the 40 works of art under contract with Sotheby's. 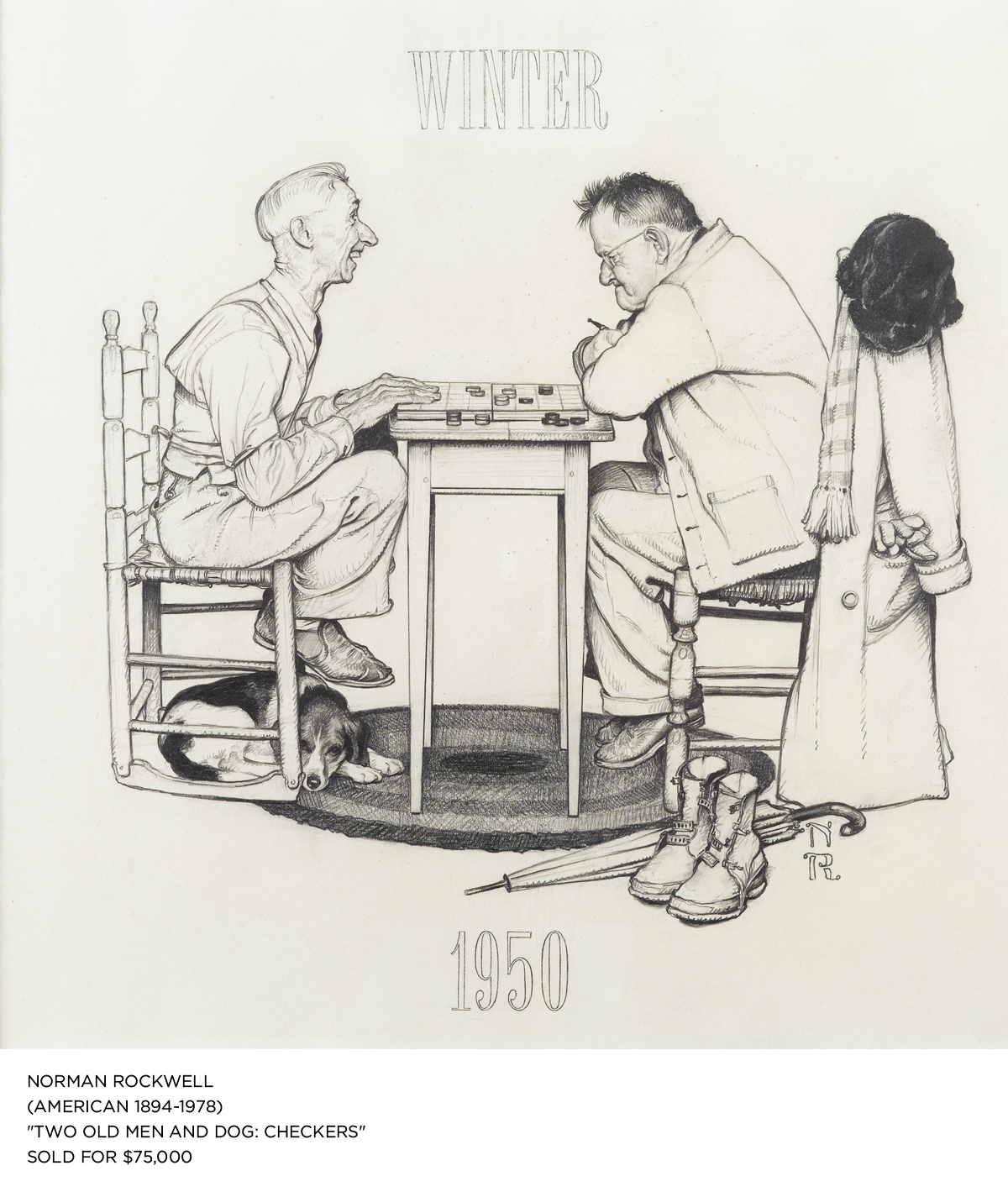 Could the Rockwell Heirs Stop the Sotheby's Sale?
Massachusetts Superior Court Associate Justice John A. Agostini wrote in his opinion that the case was essentially about art deaccessions. According to the Association of Art Museum Directors (AAMD), deaccession is the practice by which an art museum formally transfers its ownership of an object to another institution or individual by sale, exchange, or grant, or disposes of an object if its physical condition is so poor that it has no aesthetic or academic value. Deaccession is an integral part of collection management in museums, the justice explained. The failure to periodically both pare down and complement a collection may render the art collection obsolete. Consequently, deaccession involves both artistic and financial decisions that go to the core of its mission. The justice went on to note:

A conflagration occurs, not with deaccession, but the purpose or reason for the deaccession. If it is used to pay for a greater work of art or to change a collection's focus, deaccession is generally tolerated. However, if it is used for operations or capital expenses, it is discouraged, if not condemned. Deaccessioning items from a museum is neither illegal nor unethical per se and every proposed deaccession must be examined on its own merits.

Justice Agostini explained further that the art world has relied on two tools to control deaccession: self-regulation and peer-regulation. Self-regulation is simply the policies and procedures that a museum promulgates to guide its operations. The Berkshire Museum allows deaccession and has enacted specific policies for such an event. Peer-regulations relies on accreditation and professional ethics codes. Accreditation is undertaken by the American Association of Museums, and ethical considerations are generally regulated by the AAMD. Peer-regulations often have been a "powerful tool" in guiding museums that are considering deaccession for financial reasons. However, there are numerous examples of museums deaccessioning artwork for operating or capital costs.

But, the justice noted, the courts have played a "very limited role," and there is "scant" legal authority when a conflict of this nature arises.

Only the Attorney General Can Sue
Justice Agostini said that generally only the Attorney General has standing "to protect public charitable trusts and to enforce proper application of their funds" and assets. Since the law authorizes only the AG to enforce public rights in a public charity, the plaintiffs had to show that they sought to enforce some kind of private right. Here, Norman Rockwell's heirs and the beneficiaries of his trust argued that their unique right to enforce promises made to their father gives them standing in this case. However, the justice held that the law doesn't allow them as heirs or beneficiaries to enforce their father's contracts-that responsibility typically belongs to Rockwell's estate or his trust-neither of which were parties to the case. As a result, the plaintiffs didn't have standing to pursue their case, and their request for a preliminary injunction was denied.

Justice Agostini explained further that the question for the court was whether it was more likely than not that the sale of a substantial portion of the Museum's art would violate its corporate purposes. The justice found that there was no evidence that the sale of art, alone, was in any way a violation of the Museum's charter. The justice went on to explain that "deaccessioning itself is not even a violation of professional ethical standards, nor is there any prohibition against selling unrestricted donated objects in Massachusetts without Attorney General or court approval."

Justice Agostini cited the AAMD Code of Ethics, which states that "[a] museum director shall not dispose of accessioned works of art in order to provide funds for purposes other than acquisition of works of art for the collection," and the Attorney General Guidelines on Notice Requirements of G.L.c. 180, §8A(c): "Notice to the Attorney General is required under Section 8A(c) only when the transaction involves all or substantially all of a charity's assets."

Because deaccession is neither barred by the Museum's charter, nor by any professional or legal authority, the Massachusetts Superior Court held that the sale, alone, didn't violate the Museum's corporate purpose.

Norman Rockwell's heirs lacked standing to seek a preliminary injunction to prevent the Museum from selling some of his works because only the Massachusetts Attorney General had standing under Commonwealth law to protect public charitable trusts. The heirs' preliminary injunction was denied. Rockwell v. Trs. of the Berkshire Museum, 2017 Mass. Super. LEXIS 208 *; 2017 WL 6940932 (Mass. Supr. Ct. November 7, 2017).

About the Author
Kurt R. Mattson is the President of Union Legal Research. He is the former Director of Library Services and Continuing Education at Lionel Sawyer & Collins in Las Vegas. Prior to this, he worked at BNA and other legal publishers, spending a substantial portion of his career working for Thomson Reuters. He serves as a consultant for several businesses, law firms, and marketing companies.

Kurt received his JD from William Mitchell College of Law and his Masters of Law (LLM) from George Washington University. He received his Masters of Library Information Science (MLIS) from Wayne State University. Kurt is the editor of Lexis' BSA/AML Update, co-author of A.S. Pratt's Mortgage Procedure Guide to Federal and State Compliance, and author of Fair Debt Collection Practices: Federal and State Law and Regulation. He is also a contributing author of Brady on Bank Checks. Kurt is also a contributor to other business and legal publications.

Want more articles like this delivered straight to your inbox? Sign up for Freeman's monthly Business Bulletin Newsletter Today.