Proclaimed "the greatest woman painter of modern times" by William Merritt Chase, Cecilia Beaux led a fascinating and unconventional life, rising from her difficult childhood in Philadelphia to a triumphant entry into the male-dominated art worlds of Paris and New York. 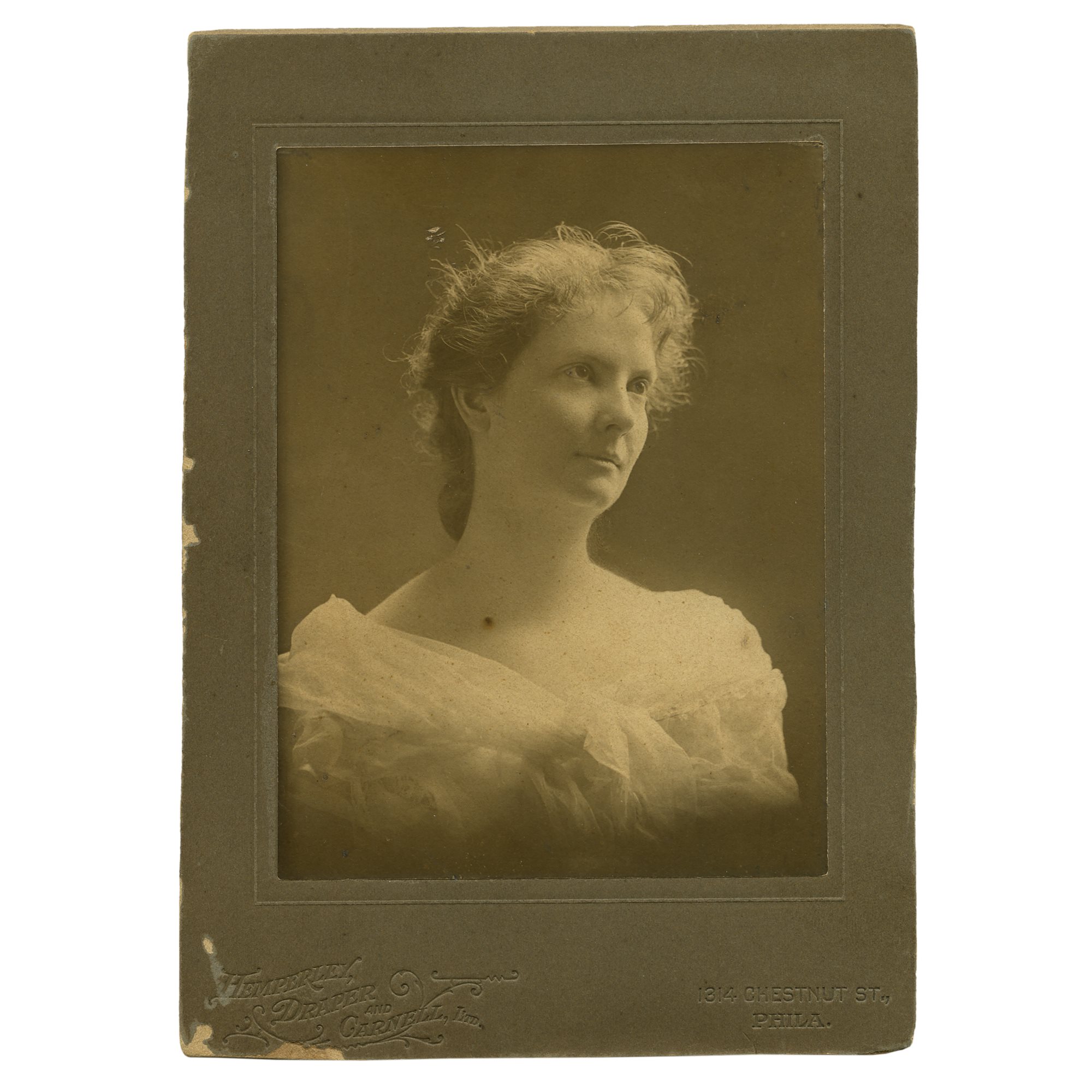 Period portrait of Ethel Page | To be offered with the painting

James Abbott McNeill Whistler and the Aesthetic movement served as the main inspiration for Ethel Page as Undine, an "idealized representation of womanhood" according to Tara Leigh Tappert. The painting features Page in a brightly illuminated three-quarter length profile set against a "tap background," most likely a Japanese fabric decorated with undulating streams of silvery water and a crescent moon – an echo to the water deity Page is impersonating. Her magnificent aquamarine dress (a Victorian-revival costume for a fancy ball) and the creamy white of the fine laces, contrast with the overall muted palette of the work. The richness of the fabric, along with Beaux's masterful rendition of the sitter's pensive psychology, demonstrate the influence of major Philadelphia portraitists, including Thomas Eakins. It also witnesses Beaux's emerging style and developing confidence in her artistic skills. 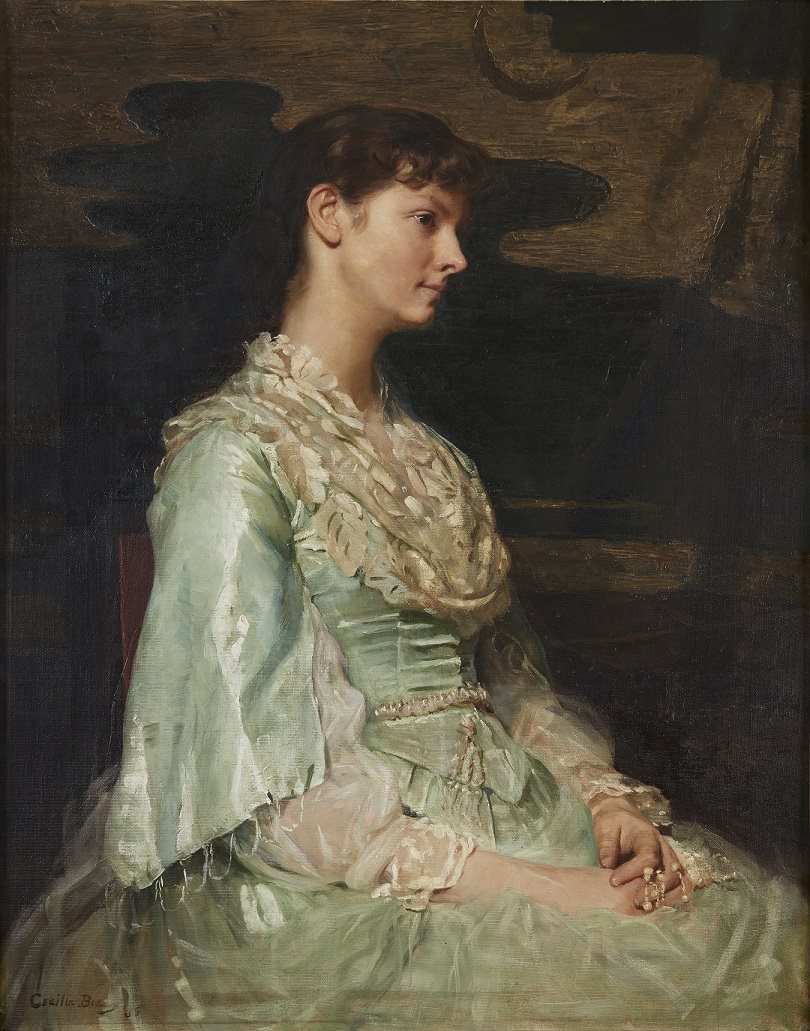 The present work, Ethel Page as Undine (1885), is one of the artist's most successful paintings, an early dazzling portrait of Beaux's life-long friend dressed as the mythological water nymph, Undine.

In her article entitled "Under the Skin: Reconsidering Cecilia Beaux and John Singer Sargent," scholar Sarah Burns reflected: "Beaux came to maturity at a time when women were entering the art world in unprecedented numbers, for the first time constituting a visible threat to the male-dominated establishment." Because of this accomplishment, one might imagine today's feminists viewing Beaux as a fierce symbol of rebellion against 19th century patriarchy. Yet Beaux was not a rebel, and did not embrace feminist values, and that may be why she remains under-recognized today. Her portraits flattered her successful male sitters, and according to scholar Tara Leigh Tappert, Beaux regarded her artistic gifts as "unique" for a 19th century woman. However, Beaux's professional achievements parallel those of other women artists of the time – namely, she rose to success independently, with a self-cultivated stubbornness, declaring "I can say I have a passionate determination to overcome every obstacle."

Cecilia Beaux was born in Philadelphia in 1855 to Cecilia Leavitt, a New York City native, and Jean-Adolphe Beaux, a silk manufacturer who immigrated to the United States from Nimes, in the south of France. Following the tragic death of her mother, her grieving father returned to France, and Cecilia and her older sister Aimée Ernesta were raised by their strong maternal relatives – their grandmother and two aunts. Following art lessons with Catharine Ann Drinker, a family friend, Beaux studied perspective and copied antique masters with Francis Adolf Van der Wielen. She began classes at the Pennsylvania Academy of the Fine Arts in 1876, and while she admired Philadelphia's most controversial artist, Thomas Eakins, Beaux steered clear of his teaching methods and instead attended Christian Schussele's costume and portrait classes. Beaux did not regret her education at P.A.F.A, but she later claimed her only important artistic training had been two years of private study – 1881 to 1883 – with Philadelphia-born, New York painter William Sartain. It was in fact under Sartain's supervision that she began Les Derniers Jours d'Enfance, her first great success inspired by James McNeill Whistler's famous portrait of his mother. The painting brought her instant recognition on both sides of the Atlantic. 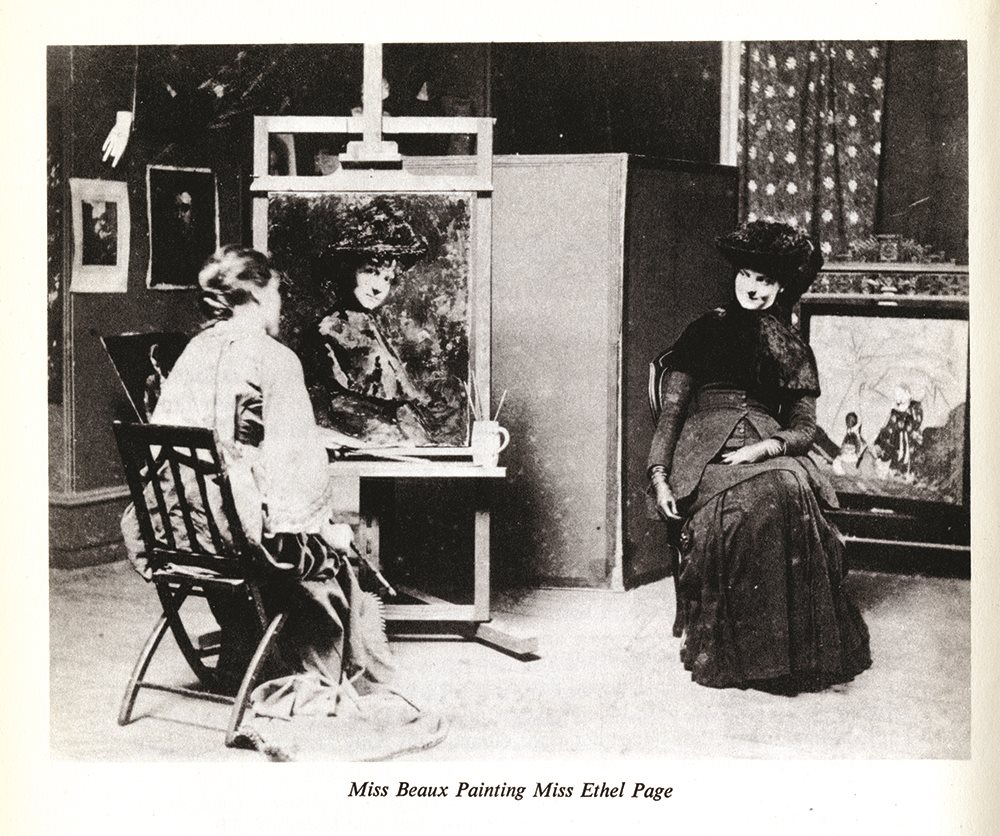 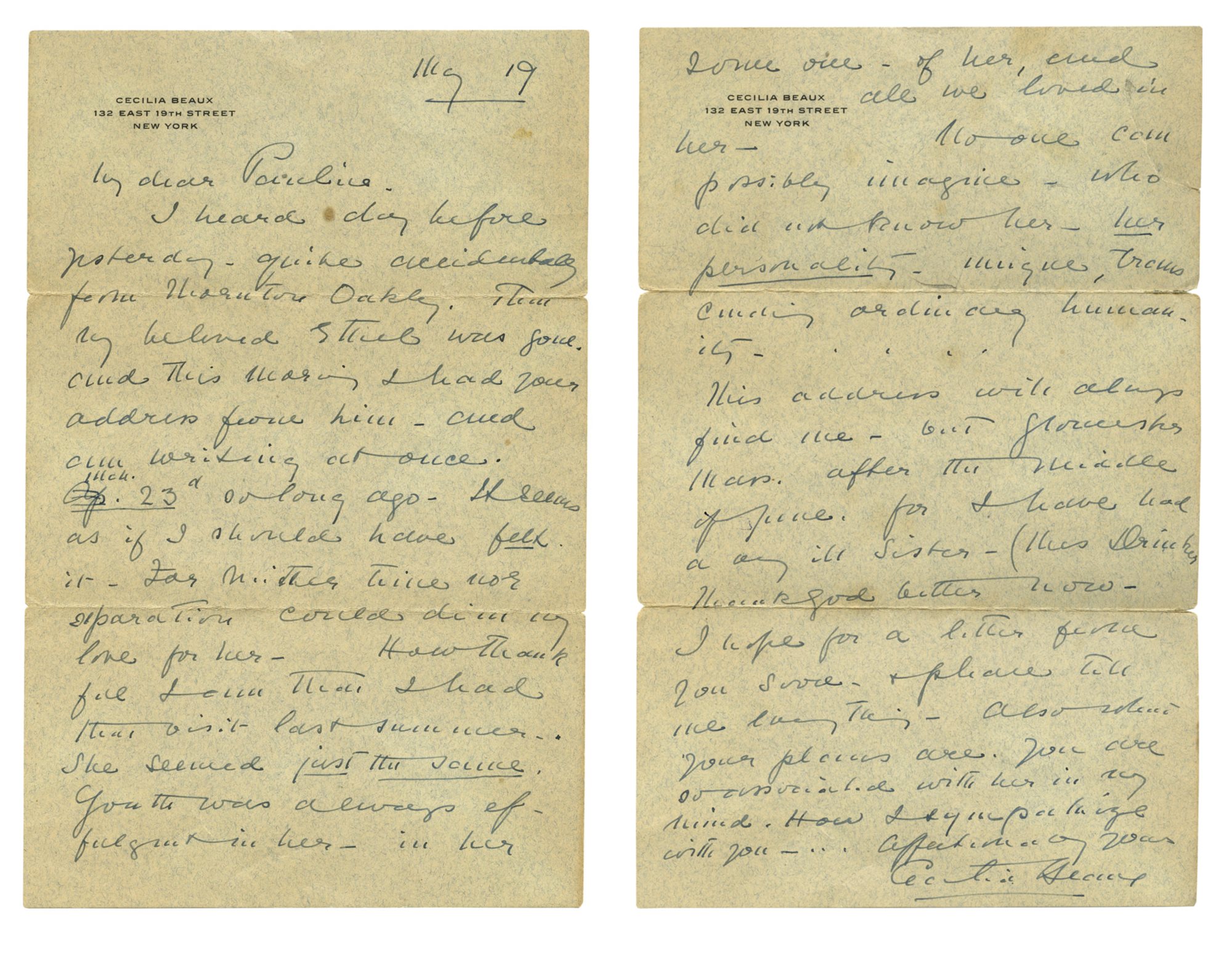 Letter from Cecilia Beaux to Pauline Bowie, dated May 19, 1934 | To be offered with the painting

“...she rose to sucess independently, with a self-cultivated stubbornness, declaring 'I can say I have a passionate determination to overcome every obstacle.'”

Ethel Page as Undine immediately follows this major achievement. It belongs to a productive moment in Beaux's career, when she completed over fifty portraits in just three years, including watercolors of close friends, crayon portraits of family members as well as representations based on photographic reference, and several commemorative likenesses. The artist met Ethel Page (1864-1934) in 1876, when Ethel was eleven years old and Cecilia was twenty-one. The daughter of Samuel David and Isabella Graham (Wurtz) Page, Ethel came from a distinguished Philadelphia family that traced its lineage back to Roger Williams, the founder and first governor of Rhode Island. When the present work was completed in 1885, Beaux had already captured the features of her friend in a rich, dark-toned portrait now at the National Museum of Women in the Arts, Washington D.C – her "first portrait entirely from life without criticism" which she executed in her large Chestnut Street studio, where Les Derniers Jours d'Enfance had been painted. Typical of Beaux's early style and dark painting of Philadelphia in the 1880s, the portrait acknowledged the artist's awareness, and reverence, of the European portrait painting traditions of Germany and France.

Even today, Beaux's motivation for depicting her friend as Undine remains unclear. Considering the artist's complex imagination and fascination for "secrets hidden from the ordinary mind," the answer may never be found. Yet, one can speculate about the underlying meaning of such an enigmatic portrait. If the literary reference to Undine may appear slightly unconventional in today's world, the mythological nymph was in fact a popular figure back in the 1880s, and the subject of many tales, novels, poems and operas. The subject of the painting may have originated from Ethel herself, then a well-established socialite in Philadelphia. Along with Queen Esther, Empress Theodora, and Marie-Antoinette, Undine was a popular figure among the rich who indulged in fancy masquerades, impersonating famous historical and mythological characters. Large fancy balls usually opened with tableaux vivants (or living pictures), in which costumed attendees posed and recreated famous scenes. Undine might be viewed as a strategic choice for the ing?nue in search of a mate. According to the legend, Undine was a water spirit who married a knight in order to gain a soul. With her seductive long hair and revealing flowy dress, Beaux may very well have wished to present her friend as a suitable bachelorette at the height of her beauty, patiently waiting for a suitor. Beaux's Ethel Page as Undine is an idealized creation of womanhood, and fits the artist's archetype of physical beauty (dark-hair and dark-eyed features). The portrayal also reaches a new level of authenticity – a woman captured as both aesthetically ethereal and socially expectant, the perfect harmony as defined by the members of the Aesthetic movement.

Contrary to Beaux's first portrayal of her childhood friend, the Undine depiction was not a commission. Painted in Beaux's new studio on Chestnut Street, the portrait was created for exhibition. Eager to repeat her triumph with Les Derniers Jours d'Enfance, Beaux sent Ethel Page as Undine to the 1886 American Art Association Prize Fund Exhibition in New York, where it was noticed by editor and critic Clarence Cook. In his magazine The Studio, Cook declared that Beaux's work, while reminiscent of renown [sic] Philadelphia portrait painter Thomas Sully, in fact surpassed it. "It recalls the late Mr. Sully's work" he said. "Though certainly Mr. Sully never painted so well as this." The same year, a journalist in the Evening Telegraph positively reviewed the work: "Miss Cecilia Beaux who is now the occupant of a studio in the Baker Building No. 1520 Chestnut Street has just completed a large and charming portrait of a young lady. This is a seated three-quarter length, and the pale blue-green tints of the soft silk robe, the creamy white of the laces and ruddy paleness of a peculiarly delicate complexion, and the greys and grey-greens of the background of Japanese draperies make a peculiarly fascinating harmony. There is some admirable painting in this portrait, and Miss Beaux who is certainly one of the few strong painters of Philadelphia, has never done anything finer." When her painting was returned to her the following year, Beaux entered it in the Pennsylvania Academy's annual exhibition, where she once again triumphed over her female peers, receiving the Mary Smith Prize for the best work by a local woman - the second time in two years. In 1889-90, Cecilia Beaux depicted the features of her friend again in a charming pastel (the last known portrayal of Ethel Page, now at the Philadelphia Museum of Art). Ethel, then Mrs. James Large, sits in a throne-like chair, facing the artist. Wrapped in a blue velvet coat with a white fluffy lining and collar, she smiles – aware of her beauty and confident in Beaux's ability to accurately capture it.