The Collection of Pedro Corrêa do Lago

The largest collection of manuscripts and autograph letters revealed

Brazilian art historian Pedro Corrêa do Lago began collecting signed letters, manuscripts, and photographs at the age of 11, when he wrote to François Truffaut and in return received a signed book about "L'Enfant Sauvage," the French filmmaker's 1969 film. What started as a childhood hobby has spanned close to half a century, and resulted in the largest private collection of manuscripts and autograph letters, estimated at around 100,000 items. Corrêa do Lago's collection includes some of the most notable names throughout history, from art and science to politics and literature. He has signatures from as early as 1153-a parchment signed by four medieval popes-to a 1985 exhibition poster signed by both Andy Warhol and Jean-Michel Basquiat. 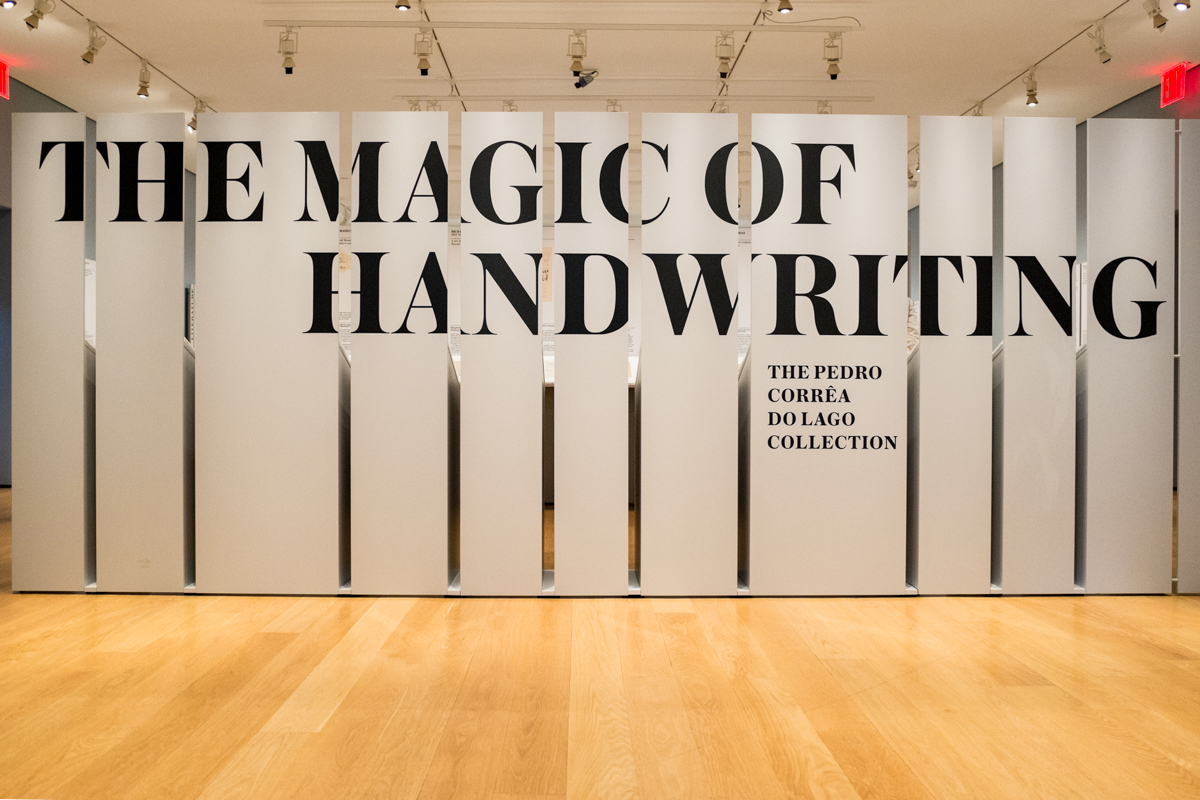 One hundred and forty pieces from the collection are currently on view at The Morgan Library & Museum, in an exhibition titled "The Magic of Handwriting." In an upstairs gallery brimming with historical significance, each letter, photograph, notecard, or doodle (in the case of Napoleon) is given its own display case, and arranged by field. There are letters and signed documents from American presidents, including Adams, Roosevelt, and Kennedy, as well as letters from early English Monarchs, including Richard III, Henry VIII, and Elizabeth I. There is a 1913 family portrait signed by all seven members of the doomed Russian imperial family, five years before their execution. A letter from Mahatma Gandhi to Solomon Alexander from 1947 reads, "The fire may quench me." 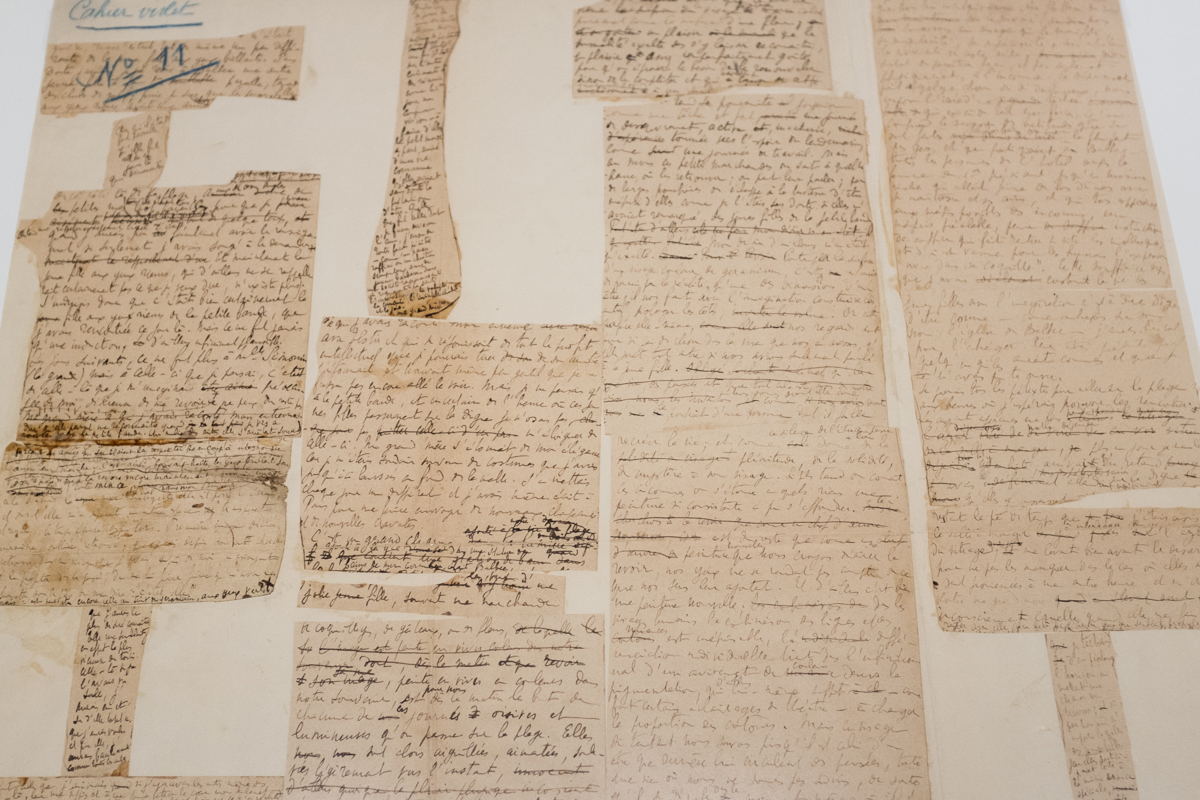 A letter from Claude Monet to édouard Manet asks for a loan of 1,000 francs, to be repaid in full or with 35 paintings by the French Impressionist. There are also several sheets from the manuscript of Marcel Proust's "In Search of Lost Time." The breadth of Corrêa do Lago's collection is stunning, and the small sampling on display at The Morgan is a fascinating look into a lifelong passion for, indeed, the magic of handwriting. 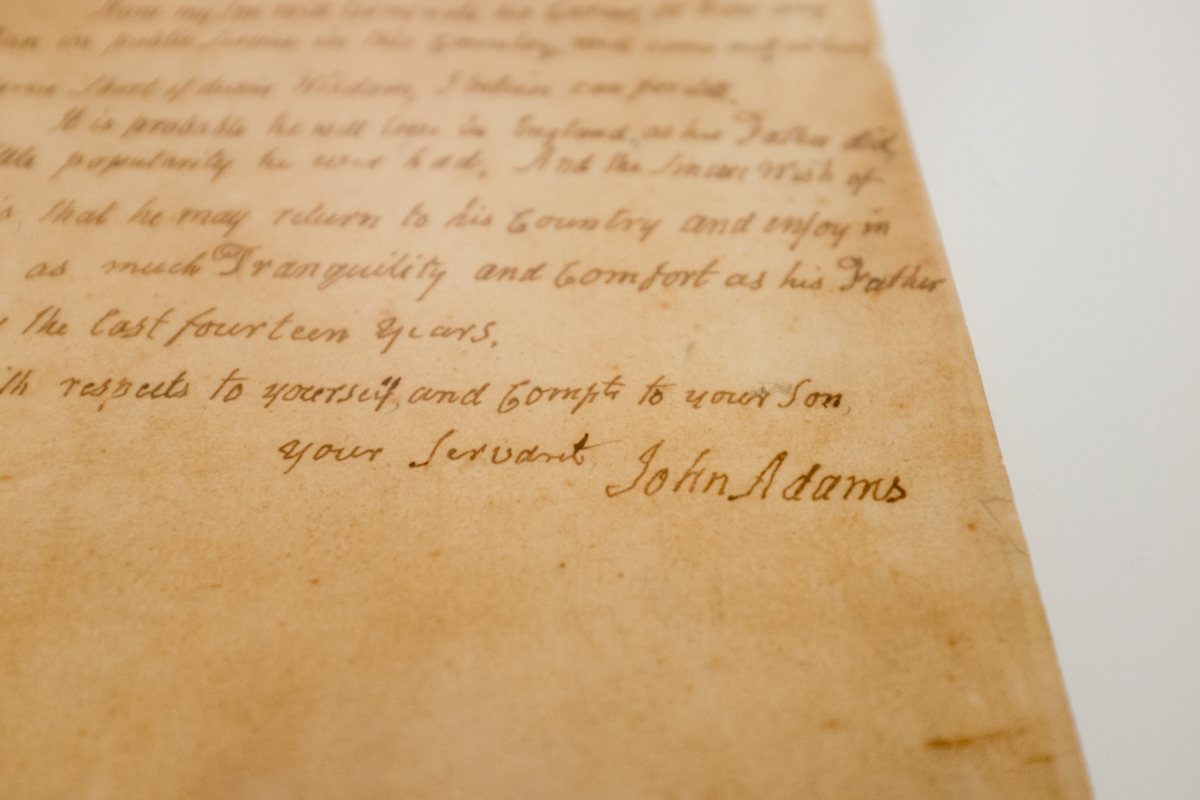 The exhibition comes to a close Sunday, September 16.

If you can't make it to the exhibition for its final weekend, or you'd perhaps like to start your own collection of handwritten letters, Freeman's September 27 Books, Maps & Manuscripts auction offers an ample selection.

An autograph note signed by French philosopher Albert Camus regarding the translation by "our friend [Justin] O'Brien" for Camus's Caligula shortly to be adapted by Sidney Lumet for the Broadway stage will be offered (Lot 372, estimate: $1,000-1,500). Three 1851 autograph letters from American philosopher, Ralph Waldo Emerson will also be up for auction (Lot 385, estimate: $500-800). A document signed by Theodore Roosevelt, appointing William C. Howell to the position of Postmaster of Blairstown, New Jersey, is part of a lot of three signed Presidential documents including a second document signed by Roosevelt as well as one signed by William Howard Taft (Lot 398, estimate: $250-400). 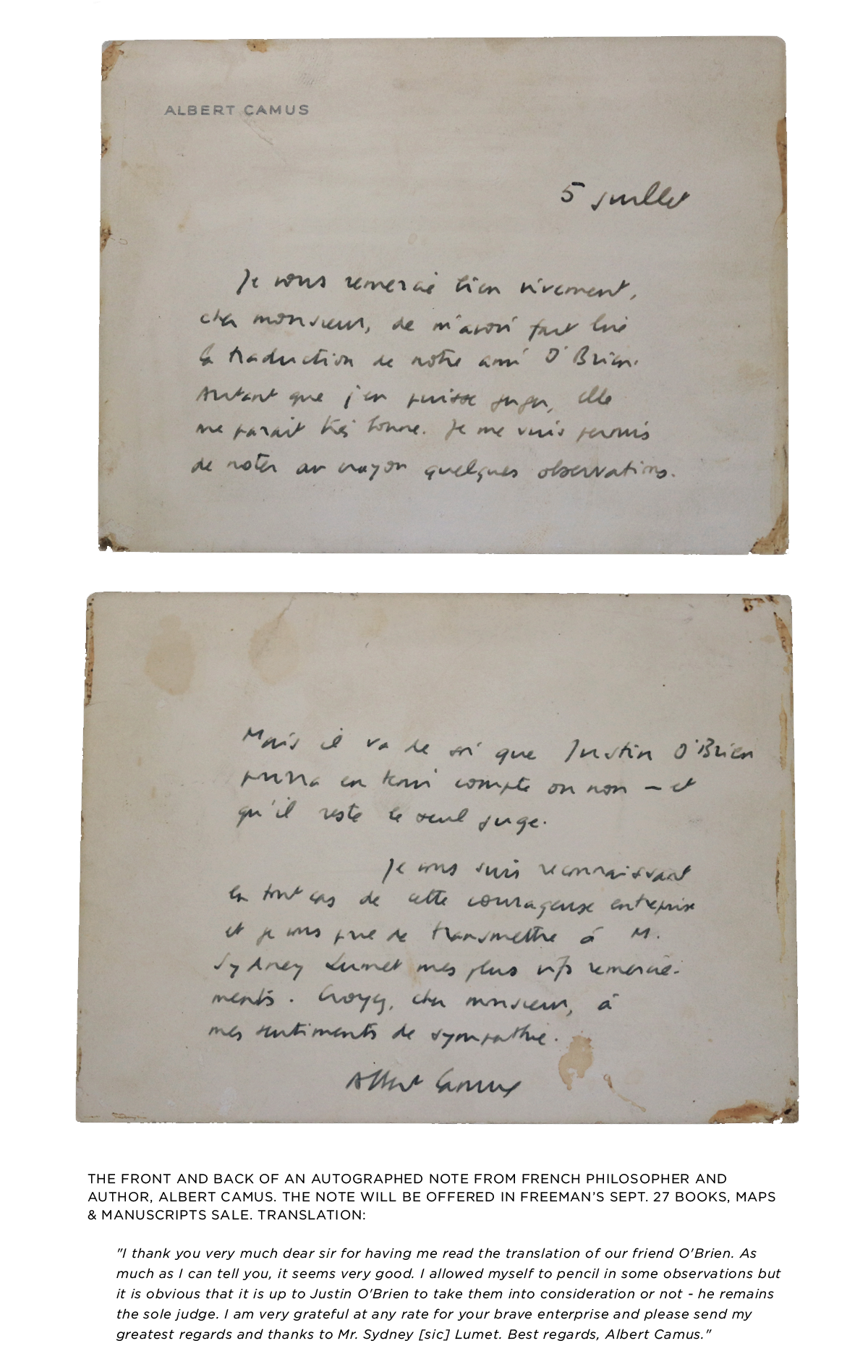 A charming postcard written and signed by American author John Steinbeck (Lot 402, estimate $400-700) is included along with a first edition of his "The Forgotten Village." An 1895 letter from Alfred Nobel (Lot 392, estimate $500-800), the man who put the Nobel in the Nobel Peace Prize is also on offer. Lastly, President Calvin Coolidge is represented by a small archive including an inscribed first edition copy of his "Have Faith In Massachusetts" as well as several related letters and documents (Lot 380, estimate $400-700).

There are many more signed letters, signed books, signed documents, and the like amongst the 479 lots in this great sale. It's never too late to start collecting...