The Collection of Ronnie M. Barokh

For nearly forty years, Ronnie M. Barokh has been known as one of the great "eyes" of the decorative arts trade. Barokh is recognized for his unrivaled ability to find exceptional works hidden in sales at small auction houses, and to identify rare and unique pieces lost in sales at major ones. His specialty was, and remains, 17th to early 19th century British & European decorative arts, unusual furniture, paintings, and objets d'art.

Barokh opened his first gallery in 1973 on the Kings Road in London, and in 1979, realizing that his taste was in demand, moved his business to the U.S., first to Santa Barbara, California, and later to a gallery on Melrose Place in Los Angeles. He now resides in Connecticut, with a private gallery available by appointment only, in order to focus his business on exclusive sales of only the most exceptional works.

Freeman's is exceedingly pleased to present Mr. Barokh's collection as a single-owner offering of nearly 100 lots in our October 16 sale of British & European Furniture & Decorative Arts. The collection comprises an elegant range of Baroque, Rococo, and Neoclassical works from across Britain and the Continent, all imbued with Mr. Barokh's signature opulent, European style. The finest of these pieces is a Charles II lacquer cabinet on silver-gilt carved stand, both dating to the 17th century. This cabinet is notable not only for its age, quality, and beauty, but also for its singular provenance from the collection of the notorious James Arthur "Jim" Williams (American, 1931-1990). 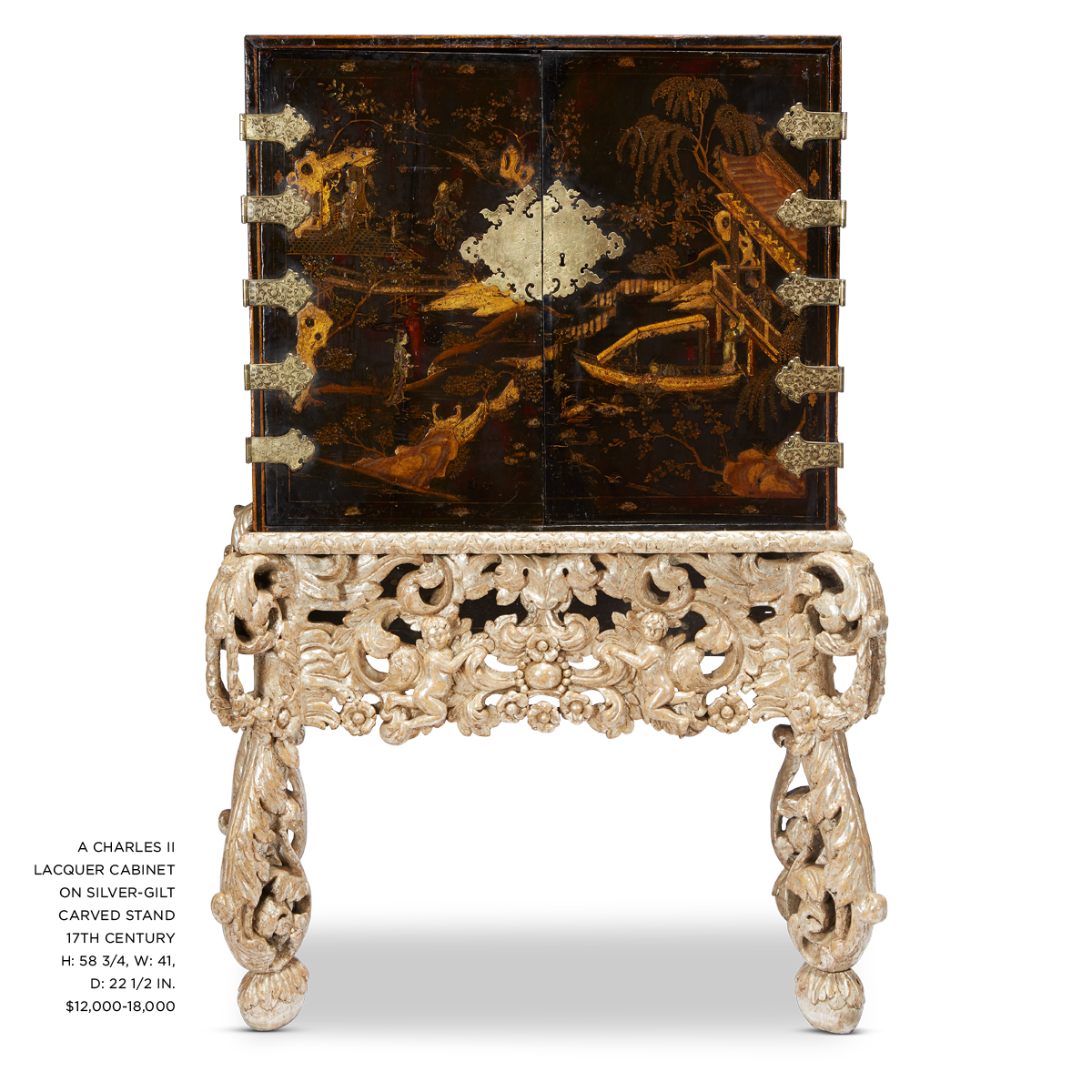 The popularity of Asian two door lacquer cabinets on European stands reached its apex in the 17th and 18th centuries both in England and on the continent, where early importation of lacquer objects from China and Japan set off a wave of enthusiasm for such works. While in Asia lacquer was often considered artistically inconsequential and therefore suitable for exportation, in Europe, the works were highly prized for their exotic origin. The offered cabinet is likely Chinese or from the Ryuku Islands in the East China Sea, dating to the first half of the 17th century.

The silvered stand's robustly sculptural high Baroque form is one which was popular in England from about 1675 to 1680. Adam Bowett's English Furniture from Charles II to Queen Anne illustrates a similar piece in giltwood on page 163, plate 5.31. A cabinet with a related stand was sold Christie's, London, 21 November 1985, lot 145, and another closely related piece also with a silvered stand was sold Christie's, New York, 11 October 2007, lot 37.

The cabinet and stand were formerly in the collection of Jim Williams, a noted Savannah, Georgia, historic preservationist and antiques dealer credited with the revitalization of Savannah's now-celebrated historic district. Williams was known and admired for his work in the city and surrounding Low Country, where he restored more than fifty homes, culminating in the restoration of the famous Mercer House (built in 1860 by architect John S. Norris, and now the Mercer-Williams House Museum), where this cabinet was a featured piece in the drawing room. Williams' colorful life and ultimate fall from grace were detailed in John Berendt's 1994 bestseller, Midnight in the Garden of Good and Evil, and Clint Eastwood's 1997 film of the same name.