Currently on view at the Morgan Library & Museum, “Wayne Thiebaud, Draftsman,” highlights one of Pop Art 's most prominent figures.

American artist Wayne Thiebaud was born in Mesa, Arizona in 1920, and spent much of his life in California. He displayed an early interest in art, apprenticing during high school at Walt Disney Studios, where he produced drawings of some of the company's most iconic cartoon characters. His first professional job was that of a commercial draftsman in the 1930s. He also worked as an art director and illustrator during this period, learning technique on the job. Thiebaud served in the Special Services Department of the Air Force from 1942 to 1945, where he worked as an artist and cartoonist. Thiebaud received his first formal art training at San Jose State College and the California State College in Sacramento under the GI Bill, and later received his first teaching appointment at Sacramento Junior College in 1951, while still in graduate school. 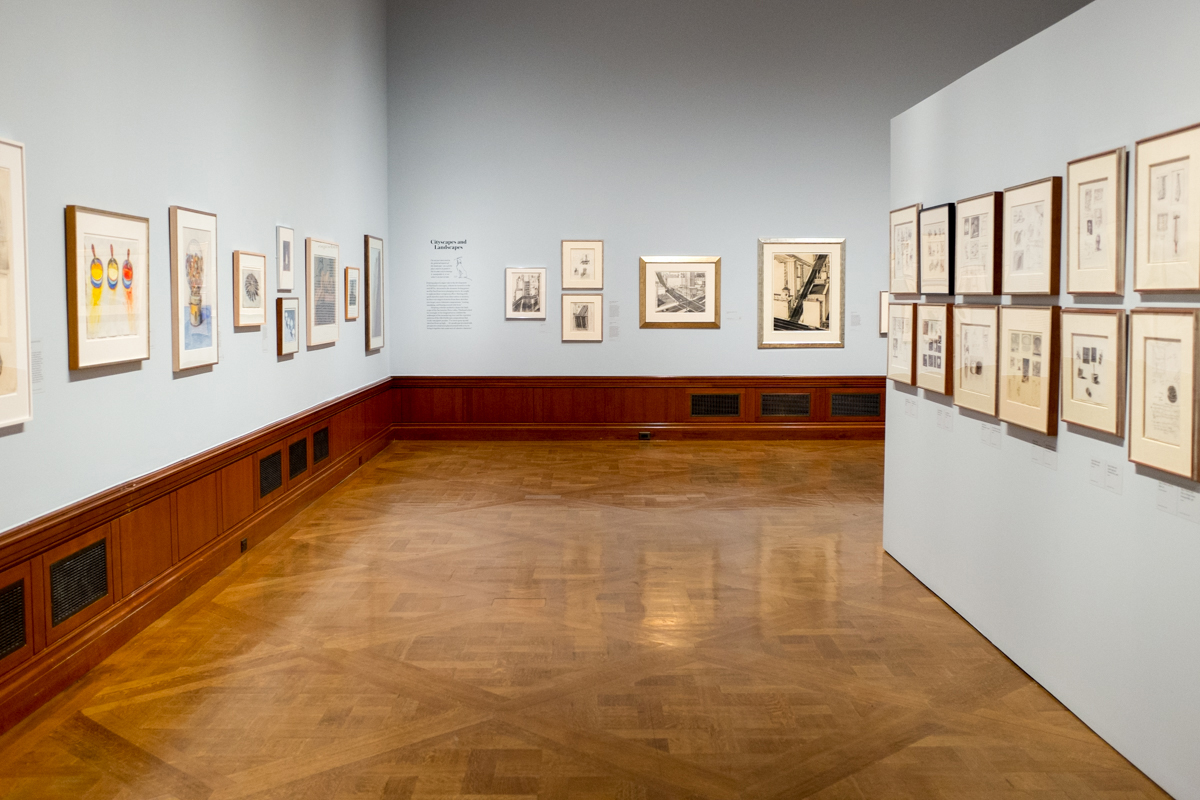 "I didn't ever think about being an artist," Thiebaud said. "I wanted to be a cartoonist first." And yet, during a year spent in New York from 1956-1957, he began painting in a style loosely adopted from Abstract Expressionists Franz Kline and Willem de Kooning, but with his own distinct geometrical clarity.

Thiebaud's heavily pigmented depictions of everyday items-usually desserts and other comestibles-grew from one of his earliest jobs, at a café in Long Beach, California, where he served pies, cakes and ice cream cones. 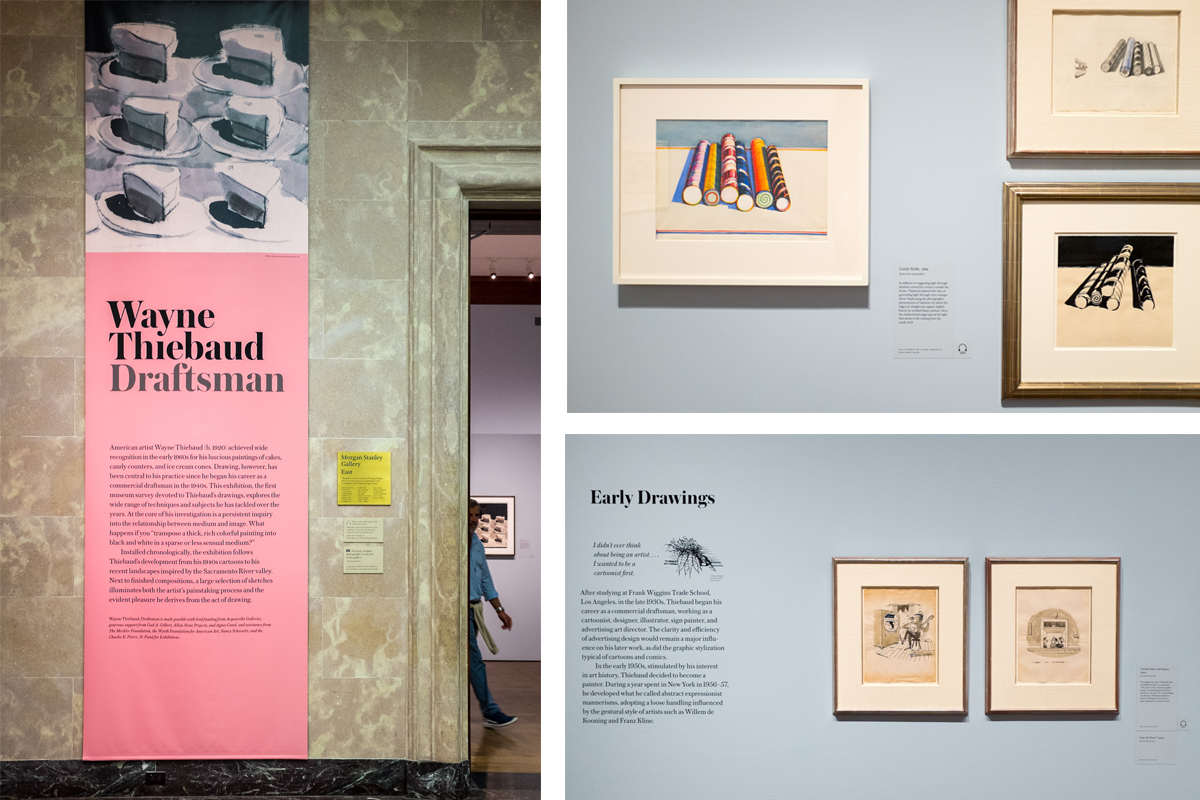 "When I painted the first row of pies, I can remember sitting and laughing...'Now I have flipped out!'" Of his whimsical candy swizzle sticks and reverently depicted cupcakes, Thiebuad said he lapped "them up with considerable enjoyment."

Later, he even produced paintings of Mickey Mouse, no doubt inspired by his early days at Disney. A commonality amongst Thiebaud's work is the use of bright colors contrasted by defined shadows, and precise, skillful lines. 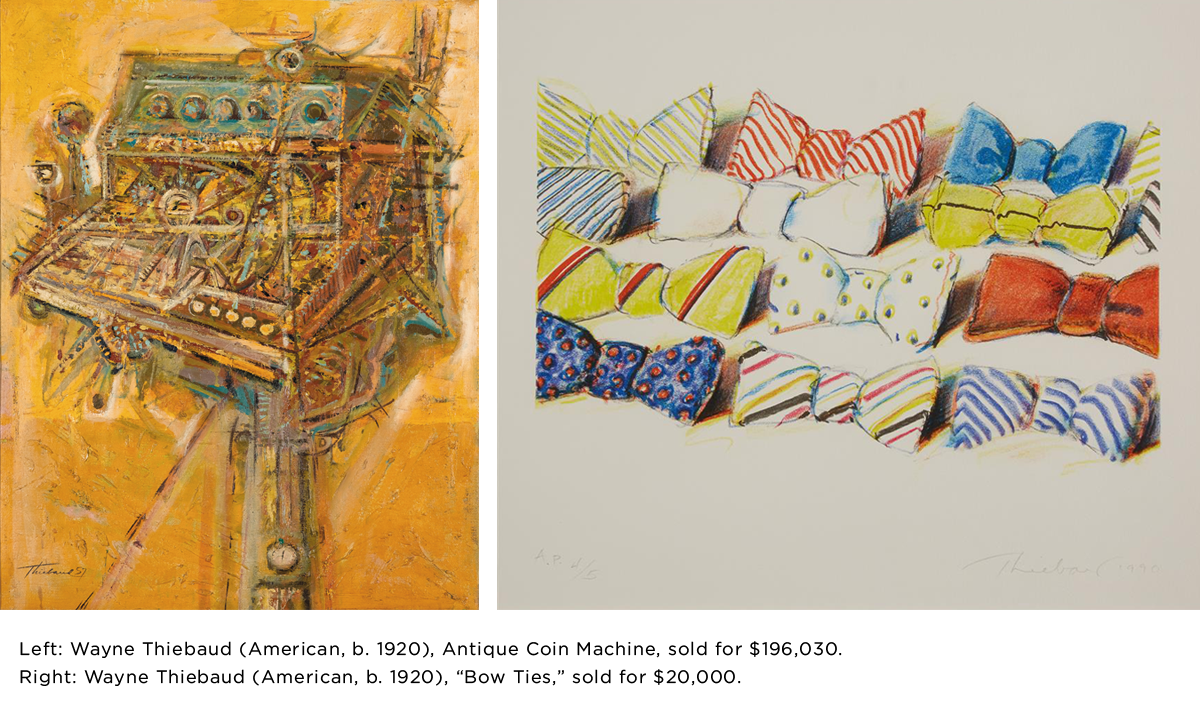 Thiebaud's first solo exhibition was held at the Crocker Museum, in 1951. A few years later, his work was included in the exhibition "New Painting of Common Objects," at the Pasadena Art Museum which also included artists Edward Ruscha, Roy Lichtenstein, Jim Dine, and Andy Warhol. Considered one of the earliest Pop Art exhibitions in the country, Thiebaud himself shied away from the label, saying he was "just an old fashioned painter." 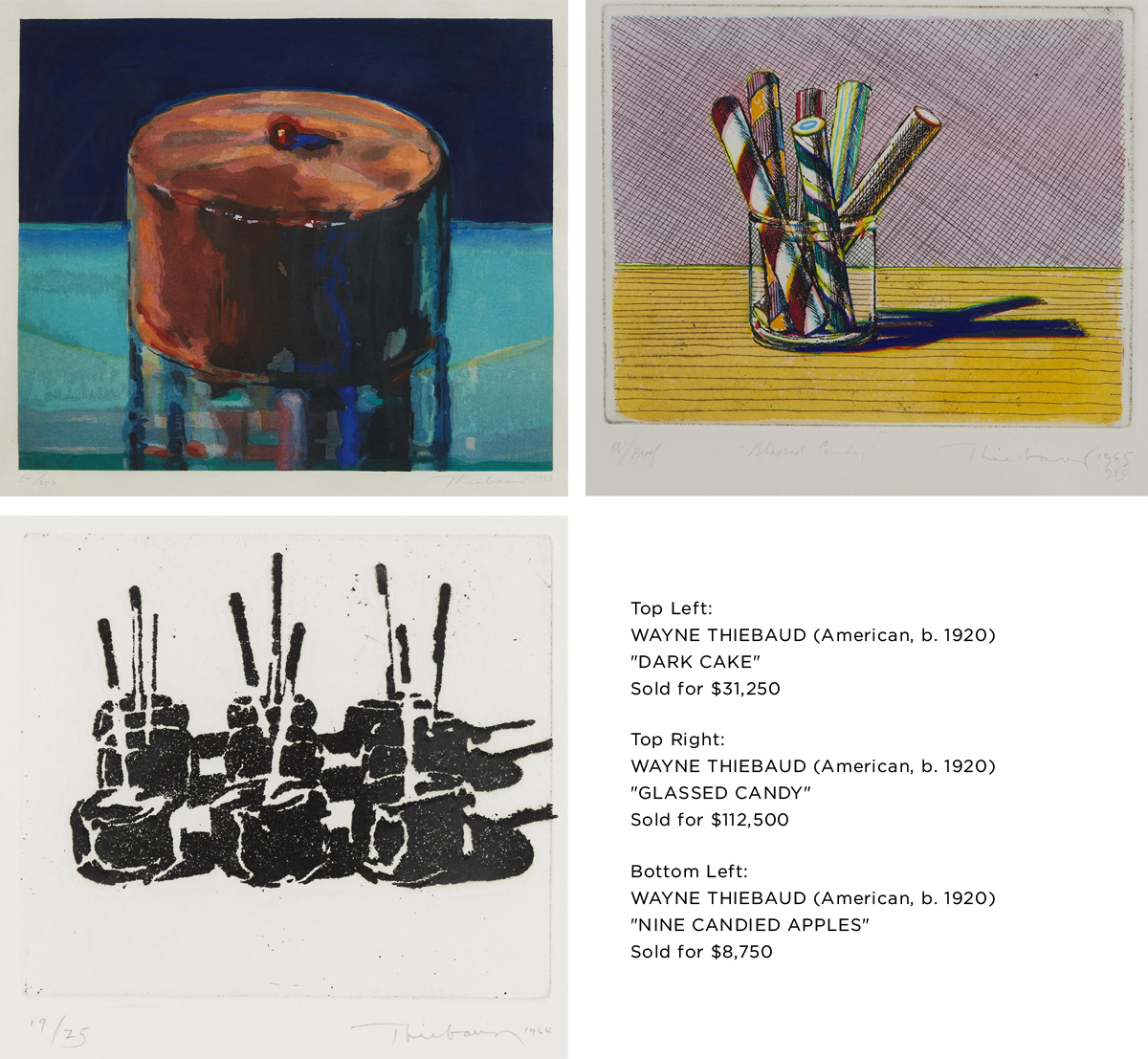 An exhibit currently on view at the Morgan Library & Museum, "Wayne Thiebaud, Draftsman," highlights Thiebaud's long career. "The show is the first to explore the full range of the artist's works on paper, from quick sketches to pastels, watercolors and charcoal drawings," says the institution. Arranged by Early Drawings, Foodstuffs, Studies and Cities, among other sections, the tightly curated show includes several cartoons as well as pencil studies for later works, as well as his iconic gumball machine and jelly apples.

The exhibit runs through September 23.