Painted between 1815 and 1830, from a third floor vista at the southeast corner of Second and Market Streets, the naïve-style urban view captures a typical summer day at the city's early commercial district, centered on the old town hall and public market sheds. The hall, which had previously held government office, was used for storage, auctions and market offices, before being demolished in 1837. The painting therefore provides a firsthand view of early 19th century Philadelphia prior to the destruction of the old town hall, and subsequent removal of all the market sheds.

The artist behind this painting is unknown, but a local, self-taught sign painter-perhaps John A. Woodside (1781-1852)-is the most likely candidate. Nothing is known about why this painting was made or for whom, although such urban views were not uncommon in this period. 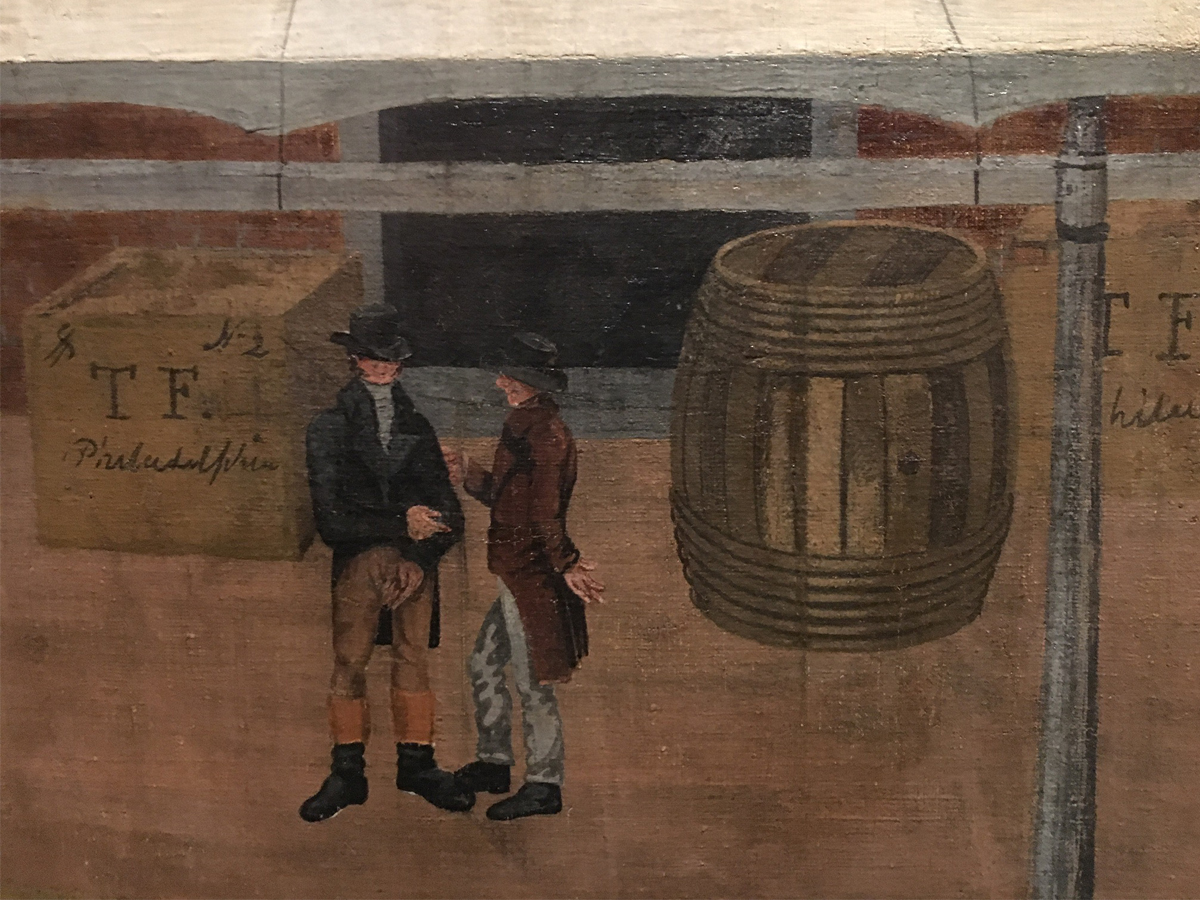 William A. Leary, the owner of Philadelphia's famed Leary's Book Shop founded in 1836, is the first recorded owner of the painting. Perhaps he commissioned the work, or acquired it in trade. Leary donated the painting to the city of Philadelphia in 1874 for inclusion in the approaching Centennial Exposition of 1876. The painting was then displayed in the National Museum in Independence Hall, and by the early 20th century, the painting had made its way to City Hall, ultimately residing behind the bench of a judge in the Court of Common pleas. After an exact copy replaced it, the original painting was moved again and today resides at the National Park Service's museum, located in the former Second Bank of the United States, a monumental Greek Revival temple on Chestnut Street.

“The painting is executed with exacting attention to detail, the artist recording early Philadelphia with specificity in mind.”

The painter painstakingly rendered each brick, each cobblestone clearly. On one exterior wall, the weather-beaten remains of a glued-down broadside can be found slowly fading away. Figures on balconies and in windows are included, watching the bustle of daily life below. Citizens of Philadelphia and visitors to the city populate the scene up and down Market Street.

At the intersection depicted, the painter carefully recorded an important early Philadelphia pharmacy. On northwest corner of Second and Market Streets, Quaker apothecary John Speakman had founded a drug store, which was later called Speakman and Say, and ultimately became Thatcher and Thompson. "Thatcher and Thompson" is cleanly painted on the store front depicted. The specificity of time and place goes even further. Directly across Market Street at the northeast corner of the intersection, under the shade of a white awning, two gentlemen converse among large wooden casks and crates. More crates sit on the sidewalk nearby and all are labeled clearly: "T.F." and numbered. It is possible that the scene recorded by the painter is none other than Tristram Freeman conducting business.

Auctioneers at this time used the auction method as a means of distributing all manner of goods. (Freeman's evolution into a fine auction house concentrating on antiques, fine art and jewelry was a long ways off). Auctions could be held at numerous places: the old town hall, at popular coffee houses and down at the docks, where ships came in laden with everything from mahogany lumber to fine silk from China. An advertisement placed by Freeman in a local newspaper tells of his selling 120 baskets of London beer bottles, 30 boxes of pipes and 60 crates of English earthenware pottery, along with casks and kegs of beer, tins, rods and plates. 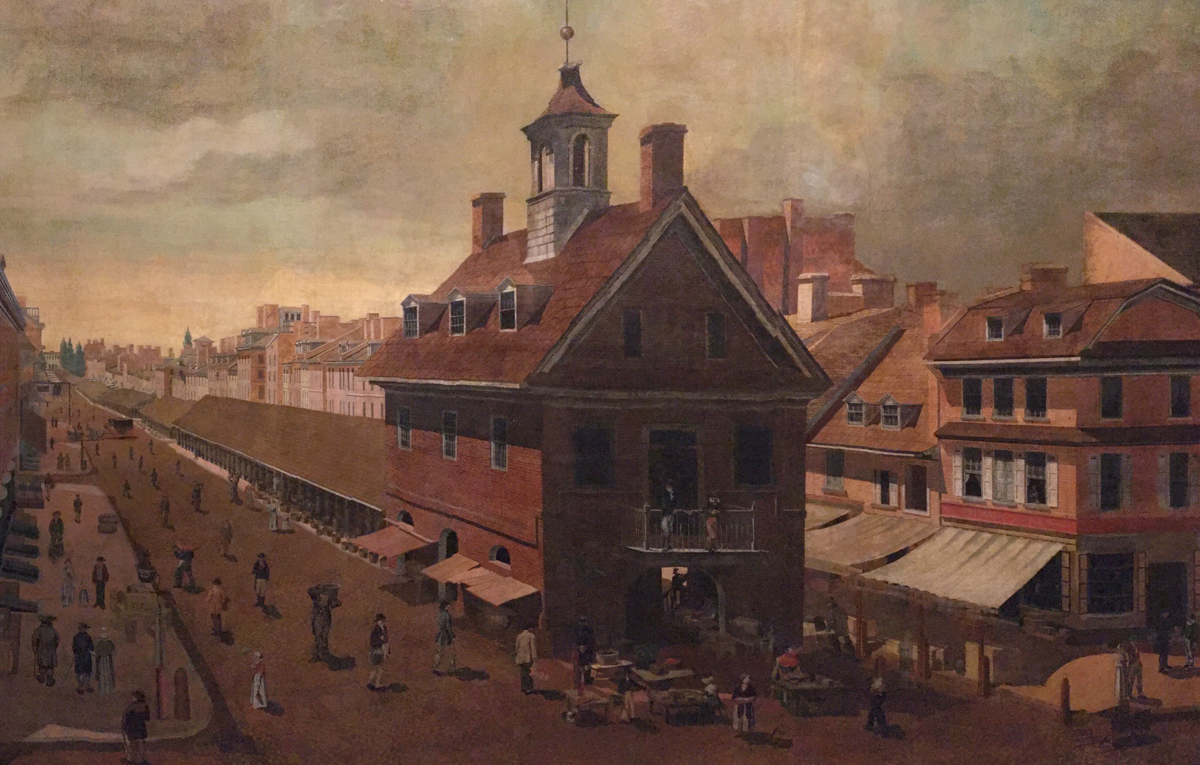 Appointed by the governor of Pennsylvania to the office of auctioneer in 1805, Freeman located his business at 177 Market Street, near the corner of the intersection depicted. At times, he stopped working as an auctioneer and became a merchant. Throughout his lifetime, Freeman was an important citizen of Philadelphia, and in 1836 was appointed the Right Worshipful Grand Master of Philadelphia's Masonic Lodge 51. Upon his death he was remembered for his conspicuous generosity and charity, which brought him high respect and "fame," according to one published account.

It is entirely plausible that the location, figures, and crates marked "T.F." in this painted view of Philadelphia would have clearly signified Tristram Freeman at work to the original viewers. Unlike the numerous other shops and market sheds that obliquely recede into the distance, Tristram Freeman and Thatcher and Thompson's drug store, due to their foreground location flanking the old town hall, were captured by the artist's meticulous eye. Small details for sure, but rewarding to period viewers of the painting, which accurately captures the busiest commercial center in the United States at the time.

Speculations No More
The identity of a man depicted in a large painted view of Philadelphia, may not depict Tristram Freeman, as speculated, but rather his neighbor and fellow businessman Thomas Fassit. Thomas and James Fassitt purchased the south-west corner lot at Second and Market from the Quakers in 1809. Shown amid barrels and boxes numbered and marked "T.F." the figure's identification as Fassitt is more likely given the painting's time of origin and the artist's fine attention to detail.