Freeman’s is delighted to announce the results of its April 8 Asian Arts auction, which featured lively bidding wars between online and phone buyers, resulting in many lots selling well above their pre-sale estimates.

“We’re absolutely thrilled that Freeman’s was able to offer such a fine and well-curated collection of Asian art, including various porcelains, jades, and other works of art,” remarked Head of Department Ben Farina. “We were particularly delighted by the reception and performance of the Meiping dragon vase, and feel fortunate to have been entrusted with a number of heirloom collections, which were passed down through several generations.” 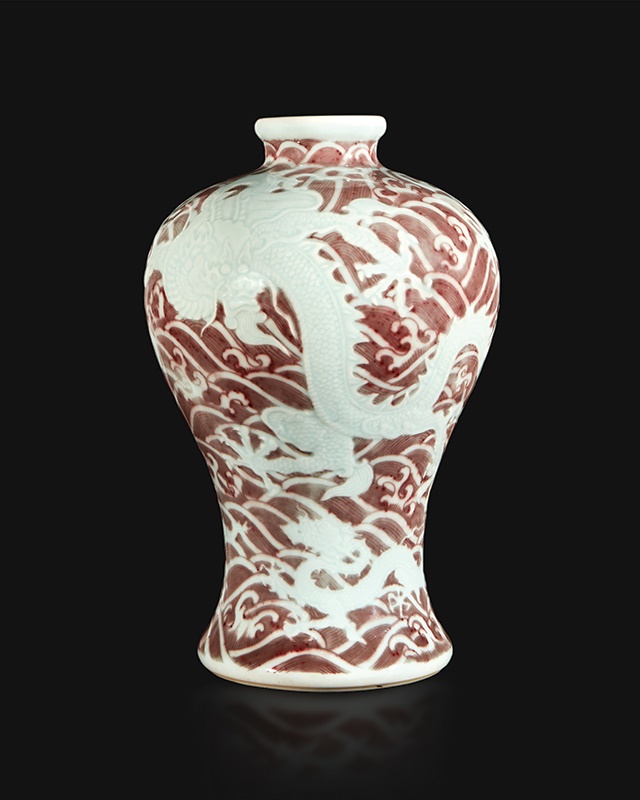 The carved and red-underglazed vase that sold for $2.3 million at Thursday’s auction is a rare example of a small group of wares made for the Yongzheng court. The vase received a high opening bid of $1.2 million, followed by competitive bidding from multiple phone bidders.

The vase came to auction at Freeman’s from the Collection of Sheelah M. Langan (1910-1993). Learn more about the vase here.

The auction kicked off with a bidding war over a Ming dynasty blue and white porcelain large bowl (Lot 1), which sold for $30,240, far surpassing its $5,000 high estimate. This set the stage for several other impressive sale prices for works of Chinese porcelain, including a Chinese puce-enameled porcelain cylindrical brush pot (Lot 16, estimate: $3,000-5,000), which realized $63,000, and a Chinese famille verte-decorated lobed porcelain large bowl (Lot 44, estimate: $4,000-6,000), which realized $22,680. These sales—featuring energetic, aggressive bidding and counter-bidding—underscore the relevance of such artifacts to the contemporary collector.