The symbolic power of seasonal blossoms

As spring returns—and with it, bright new growth in our gardens and on our trees—Freeman’s April 13 Asian Arts auction provides plenty of opportunities to admire blossoms in a different sort of medium. Flowers rendered in ink, inlaid on lacquer, or painted in glaze on porcelain not only provide charming visual appeal, but open onto a world of symbolic meaning in Chinese and Japanese art. 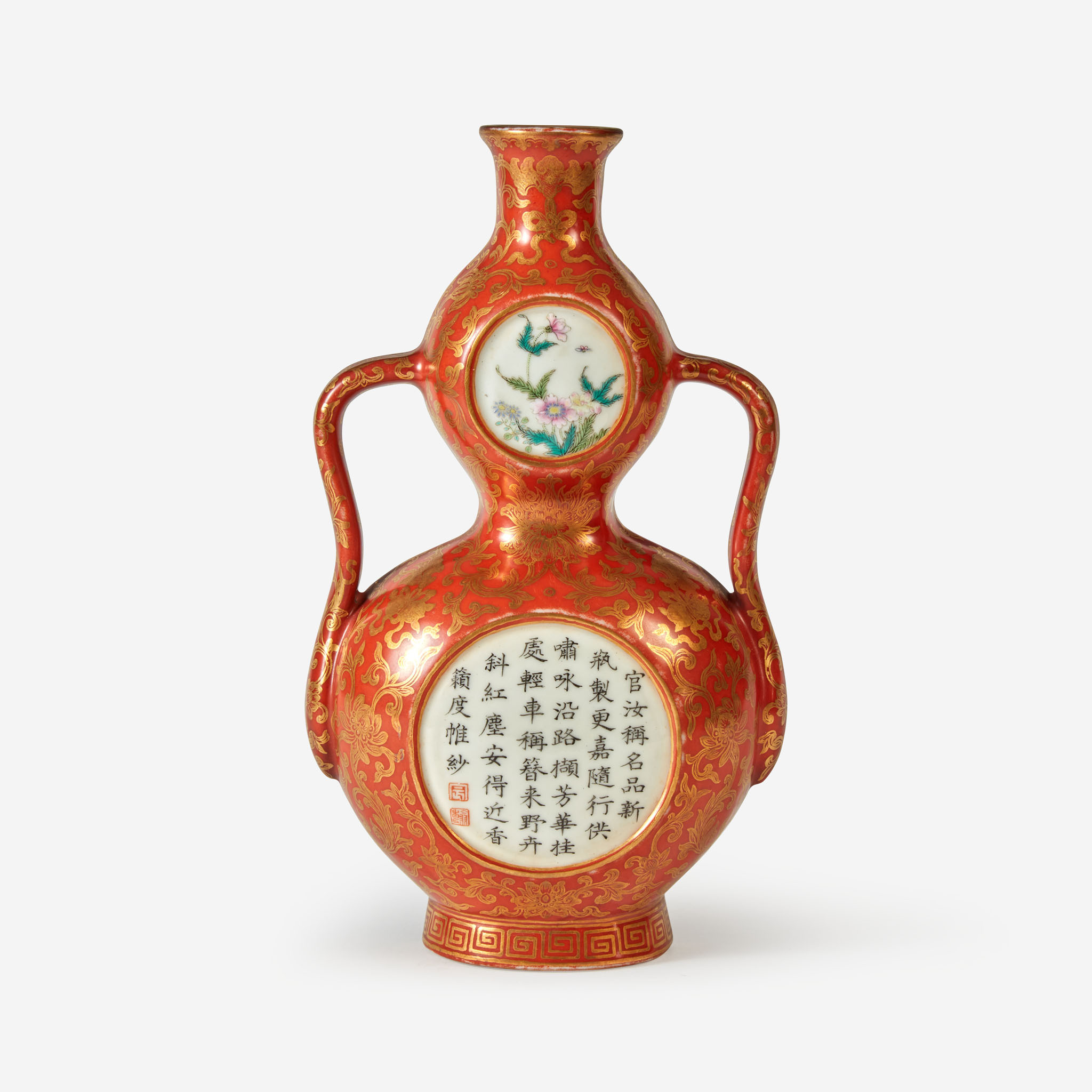 Two vases on offer in Asian Arts highlight a frequent interplay featured over and over in Chinese decoration: that of flowers and birds or insects. A Chinese famille-rose decorated coral-ground wall vase (Lot 177; estimate: $1,500-2,000) captures a garden scene of poppy and aster with a small insect buzzing nearby. This finely decorated illustration is featured in a circular reserve set against the deep orange-colored vase body, almost giving the viewer the impression of seeing the scene through a looking-glass. 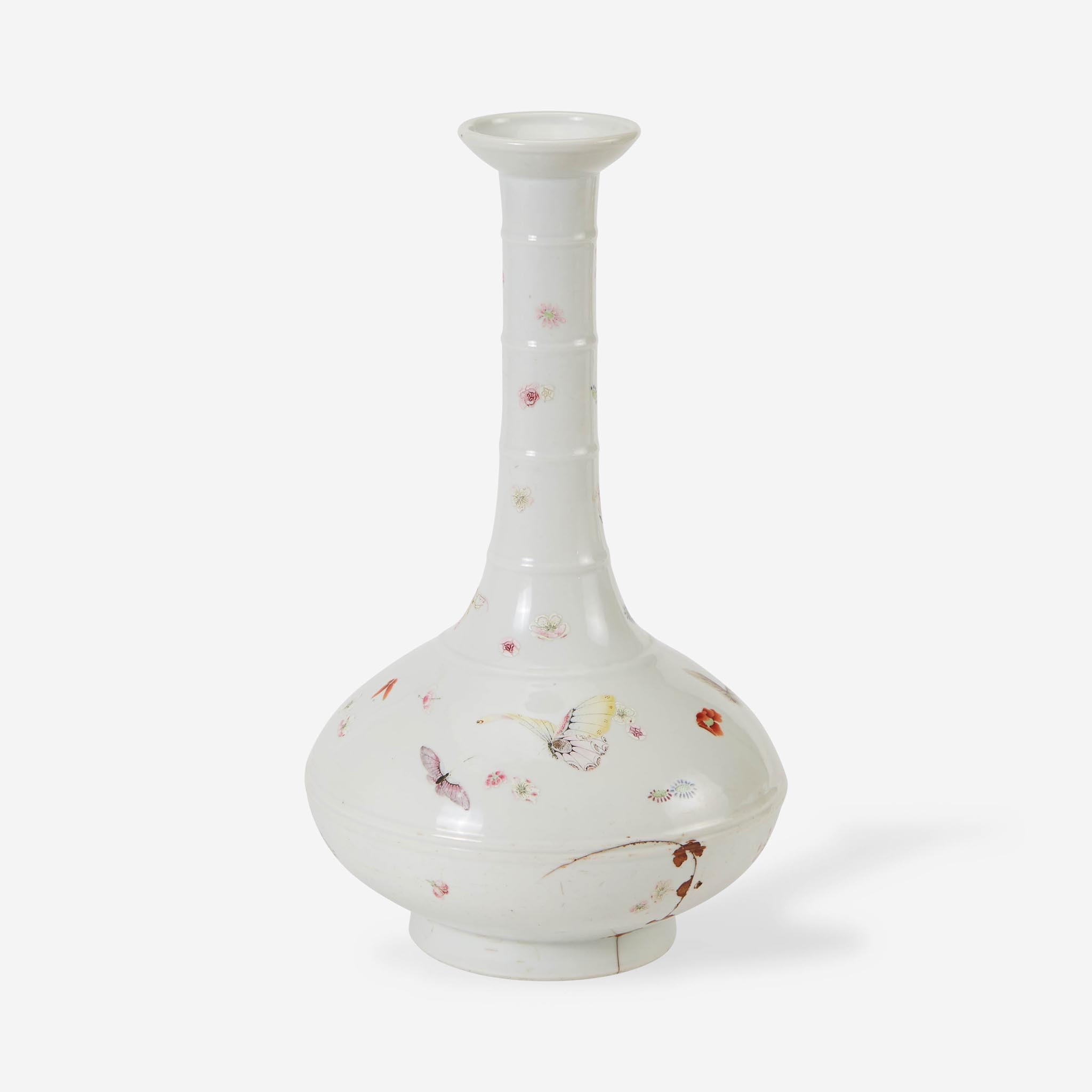 An unusual Chinese famille-rose decorated “Butterflies and Blossoms” bottle vase (Lot 7; estimate: $5,000-7,000), on the other hand, is striking in its sparse elegance; pink, orange, blue, and white blossoms appear to float against the white vase body, while multicolored butterflies dance between them. The pairing of peonies with butterflies often carries such auspicious symbolic meanings as love and marriage, and the pairing appeared frequently in patterns from Qing Dynasty art, objects, and clothing.

Though most of the floral lots on offer in Asian Arts feature flowers that remind us of spring and summertime, Chen Zun’s Chrysanthemum (Lot 32; estimate: $1,000-1,500) is a striking exception. The titular flower, which blooms in late fall, is a symbol of autumn in Chinese culture and is one of the “Four Gentlemen”—alongside plum blossoms, orchids, and bamboo—that symbolize the unfolding of the four seasons. Mounted as a hanging scroll, Chen Zun’s ink-on-paper painting features a pair of elegant chrysanthemums snaking their way upward alongside Chinese script. 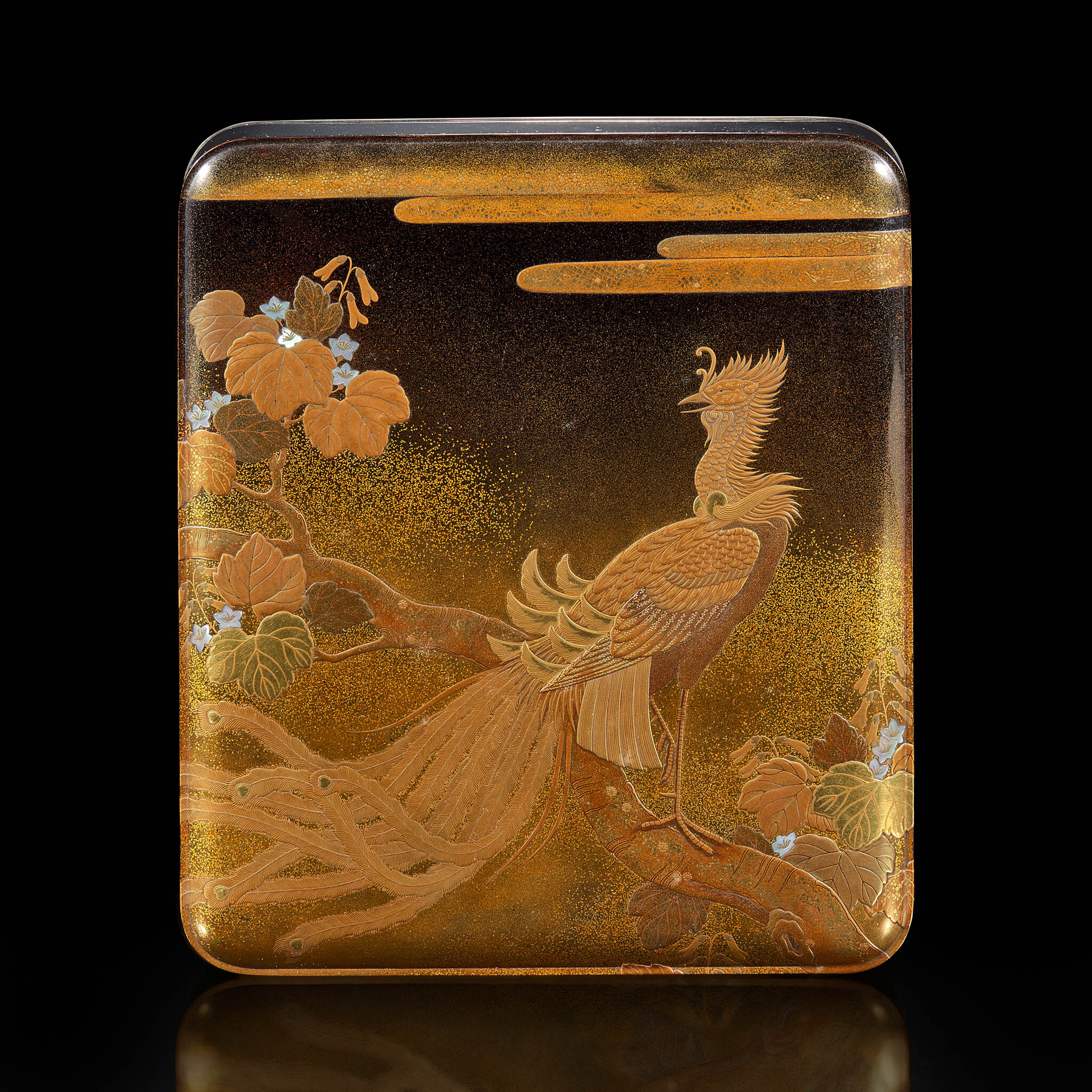 A Japanese mother-of-pearl inlaid lacquer and “Ho-o and Kiri” writing box (Lot 189; estimate: $3,000-5,000) is notable both for its intricately detailed golden design as well as its powerful symbolism. The phoenix (“ho-o”) is a well-known cross-cultural symbol of change and rebirth, but in Japanese culture it particularly denotes peace and prosperity. But it’s the tree on which the phoenix perches here—the paulownia—that Philadelphians may also recognize. Also called “princess tree” or “empress tree,” the paulownia arrived by way of Asia in the nineteenth century after its seeds were used as packing peanuts. After the cherry blossoms bloom and fall, this fast-growing tree puts on its own display of pinkish-purple flowers—elegant enough to suit this phoenix. 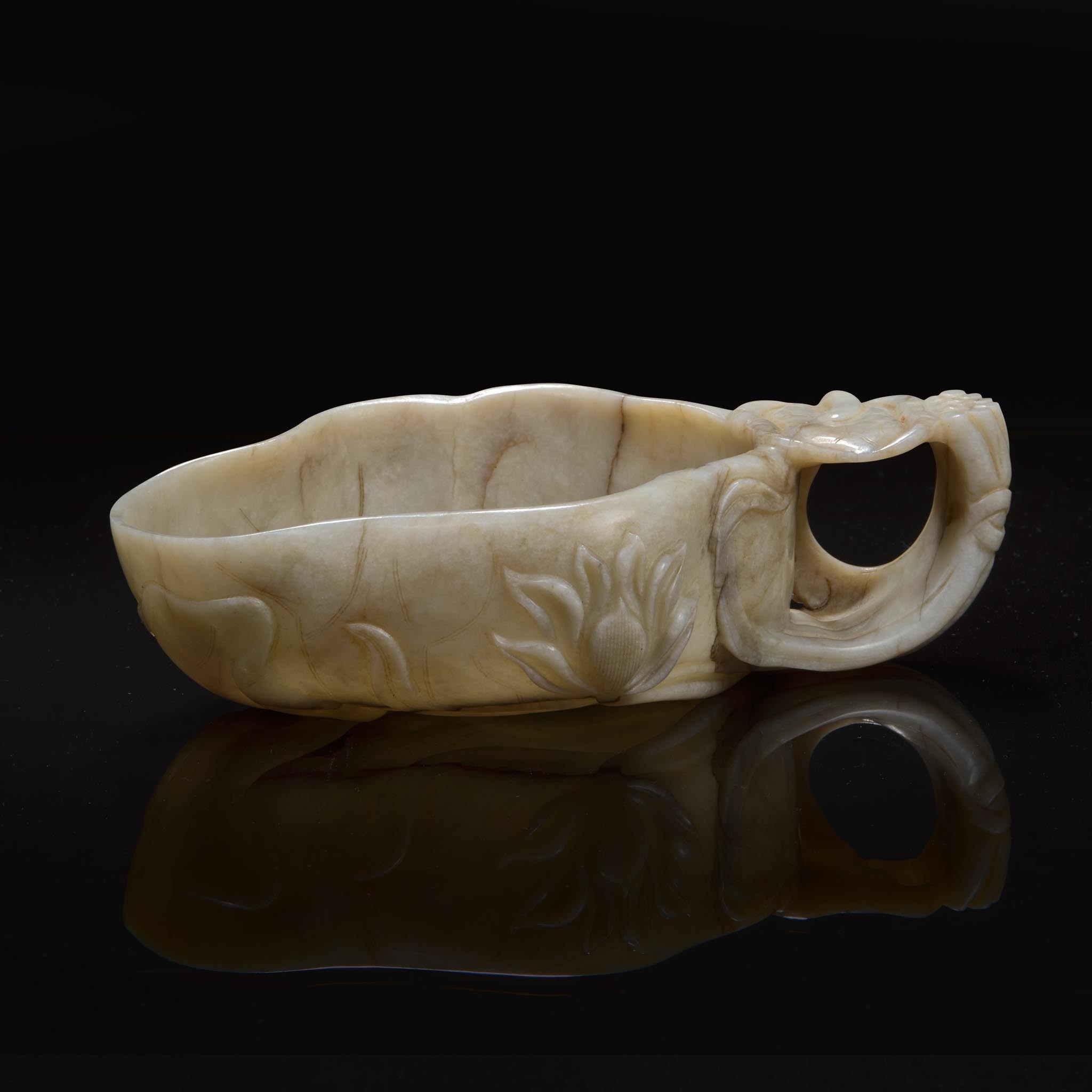 Lotus flowers are a ubiquitous fixture in Chinese art and culture, but what does their presence symbolize? Examples like a Chinese creamy-white jade “Lotus Leaf” coupe (Lot 40; estimate: $1,500-2,000) help us understand their powerful symbolic meaning as bearers of purity: rising from the mud, they float along the surface of the water, untouched by the depths below. The crisp carving of the present jade, as well as its coloring, underscore this meaning. 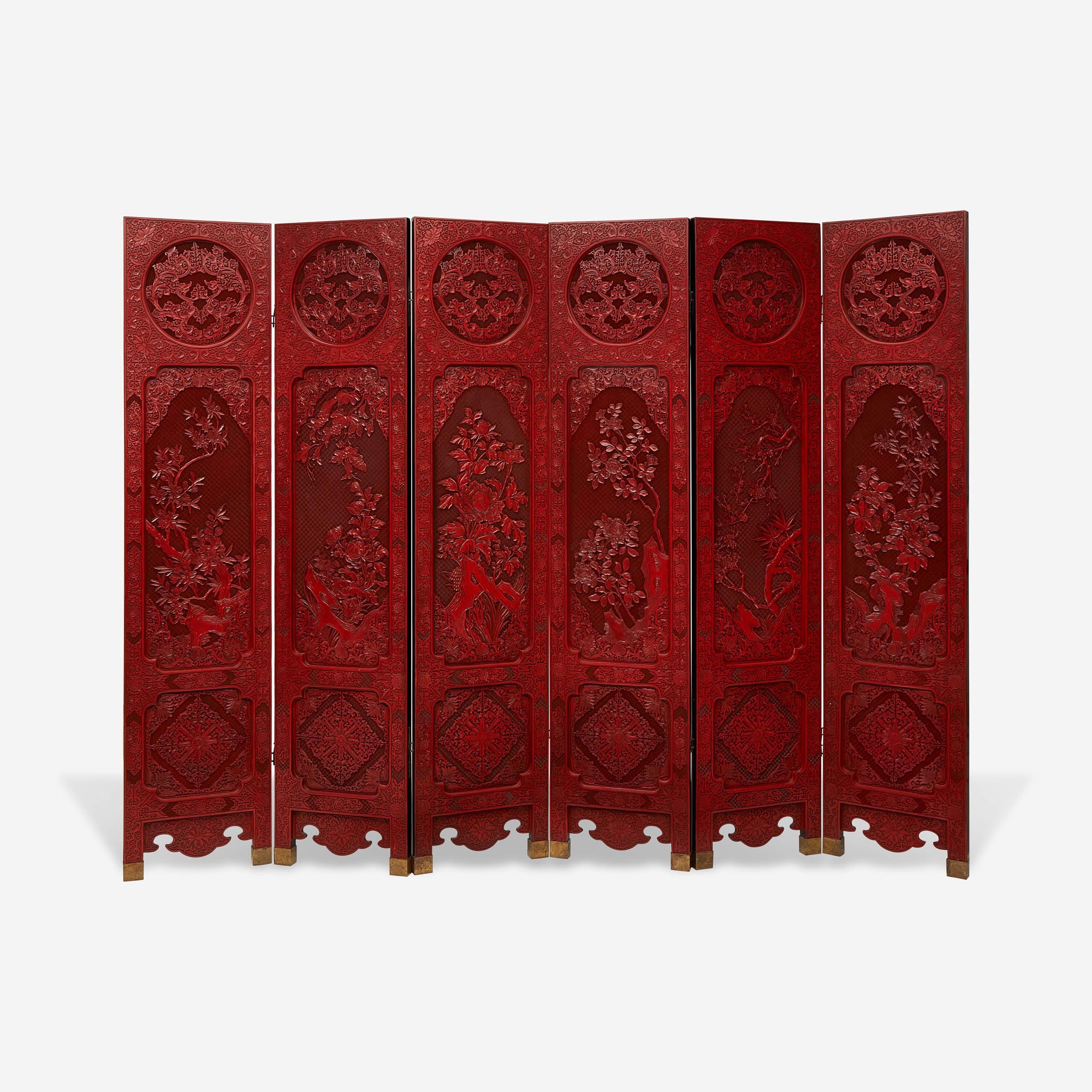 Lotuses can be spotted throughout Asian Arts, but are particularly striking in Lot 156, a finely-carved Chinese six-panel cinnabar lacquer wood screen (estimate: $3,000-5,000), an incredibly intricate and elegant work featuring allover floral motifs. Such screens had multiple uses, both decorative and functional: they divided rooms, protected from draftiness, and offered privacy as dressing screens. The imagery on this screen is particularly auspicious, featuring a lush landscape of not only lotus blossoms, but additional flowers, trees, and even dragons—a notable symbol of good fortune.

View the rest of our April 13 Asian Arts auction.