The Furniture of Frank Lloyd Wright

Designed alongside his buildings, Wright's furniture offers a window into his process.

Frank Lloyd Wright may be most closely associated with his towering architectural feats, from the iconic Solomon R. Guggenheim Museum to the many buildings throughout Philadelphia and Pennsylvania instantly recognizable as Wrights, the Beth Sholom Synagogue in Elkins Park and Fallingwater in Mill Run among them.

Though smaller in scale, the furniture and design objects Wright produced throughout his decades-long architectural career are no less spectacular and carefully constructed than the buildings themselves. Rooted in the belief that a home’s interior aesthetic is just as important as its exterior and the quality of its construction—and with an eye toward functionality and clean, beautiful lines—Wright’s furniture was designed to be fully integrated into his structures.

Admirers of Wright’s architectural vision will be pleased to find three of his furniture works in Freeman’s May 12 Design auction—an excellent opportunity to bring home smaller pieces of Wright’s aesthetic sensibility. The first is a selection of two chairs for the Charles L. and Dorothy Manson House in Wausau, Wisconsin (Lots 27 and 28; estimate: $7,000-9,000 each), cypress plywood works with cream-colored upholstered cushions. 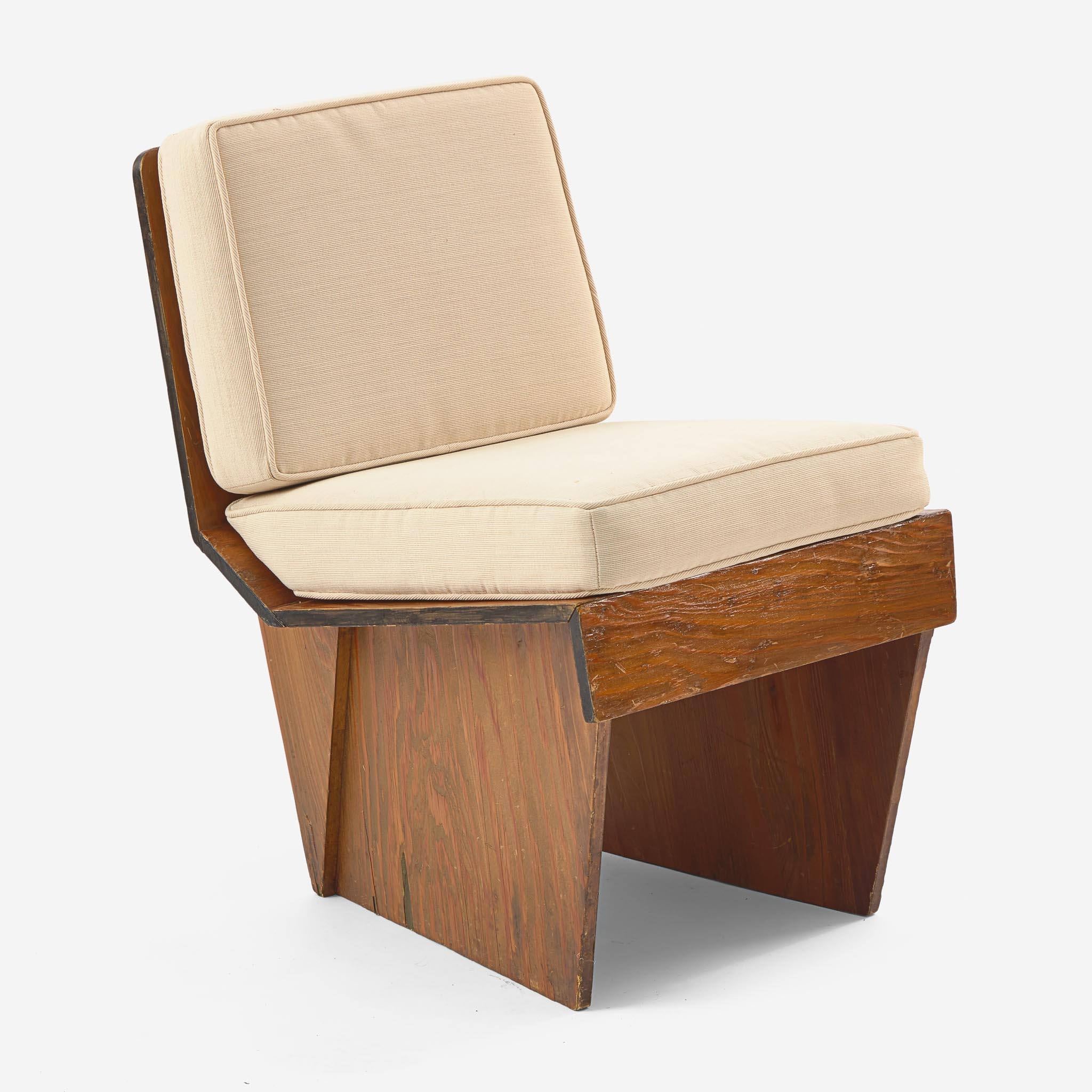 The material of these chairs echoes the red cypress and brickwork used to create the exterior of the Manson House, which was one of Wright’s early “Usonian” designs. The homes Wright described as Usonian (his preferred alternative term for “American”), many of which were constructed in the Midwest, used native materials, efficient construction methods at relatively low cost, and followed a more open floorplan than previous designs. Conceived as part of the house itself, the present chairs—matching the Manson House’s dark wood/light upholstery interior—are living artifacts of a critical moment in Wright’s development as an architect and designer.

The third piece of Wright furniture on offer in Freeman’s Design sale transports us from Wisconsin to Japan, where Wright traveled frequently. He made his first visit to the country in 1905, and, following a love and admiration for Japanese prints, architecture, and art, returned as the architect of Tokyo’s Imperial Hotel between 1917 and 1922. A hexagon-back “Peacock” chair from the hotel—examples of which are held in the permanent collections of the Metropolitan Museum of Art, the Cooper Hewitt, and the Yale University Art Gallery, among others—is offered May 12 at an estimate of $15,000-25,000 (Lot 26). 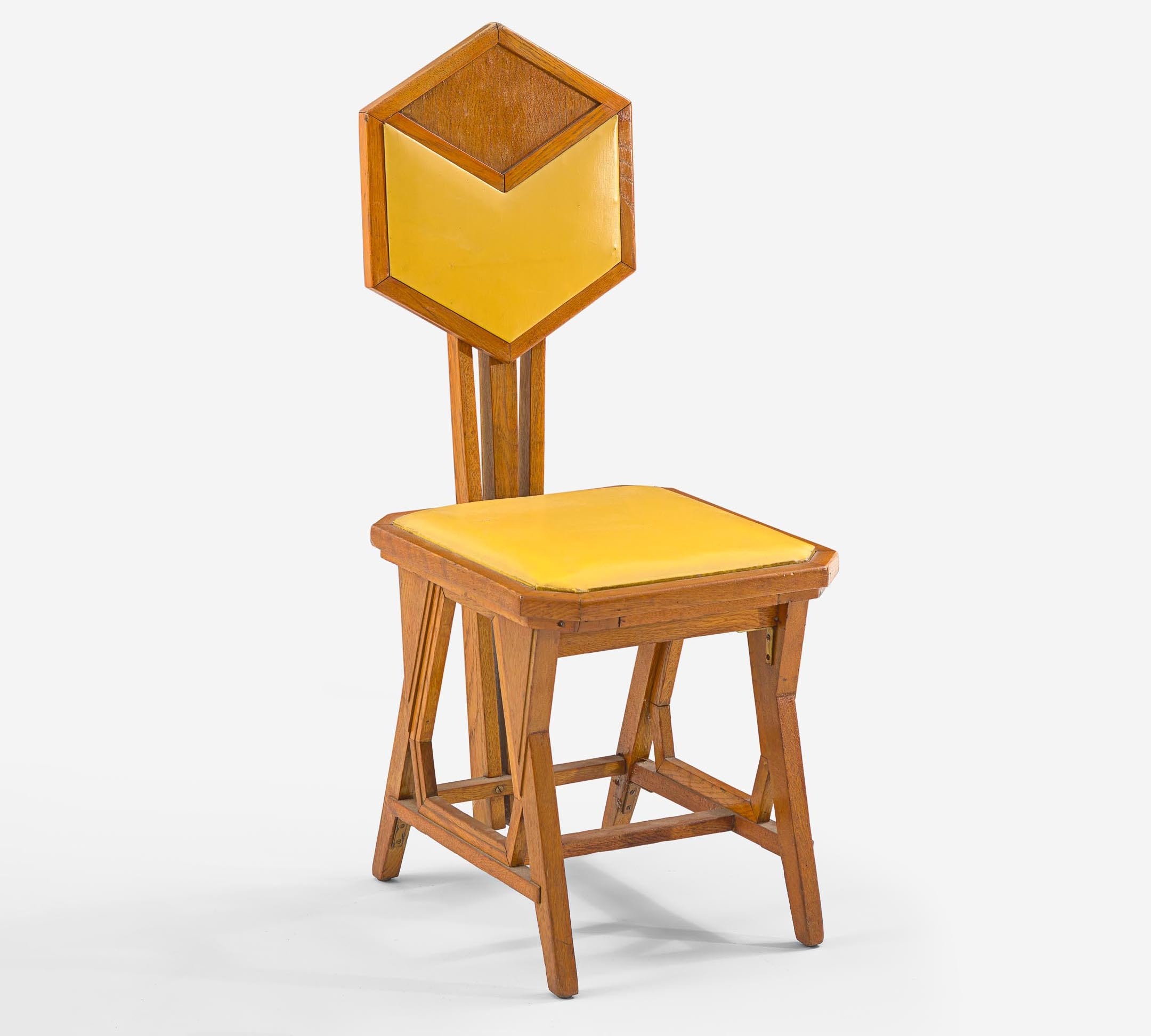 Designed for the Imperial Hotel’s Peacock banquet room, the present example features an eye-catching angular design constructed in oak and punctuated by a bright yellow painted oil cloth seat and back. Combining 1920s Art Deco geometric motifs with the signature clean angularity of both Japanese architecture and Wright’s own design sensibility, the Peacock chair is a testament both to Wright’s vision and to the quality of his work. When the devastating Great Kanto Earthquake struck Japan in 1923, just a year after the construction of the Imperial Hotel was finished, the hotel was essentially undamaged, even serving as an area of refuge during the disaster. The Wright-designed building was eventually demolished in 1967, but the present chair design is a lasting monument to Wright’s influential years in Tokyo.

View the rest of our May 12 Design auction.