How Italian modernism came to America

Learn how one Italian designer helped Americans "fall in love with Italian things."

In the decade after World War II, contemporary Italian design was everywhere in America. Alongside domestic creators like the Eameses and the International Style practitioners who had emigrated from Germany before the war, Italian architects and designers experienced an extended moment in the late 1940s and early 1950s. Their style had a distinct vocabulary – a merging of irreverent motifs and fine craftsmanship – and was undergirded by a unique philosophy of artistic production. At the center of it all was Gio Ponti, playing the roles of both an enterprising designer and an unofficial cultural and economic ambassador.

The Unity of the Arts

Ponti was born in Milan in 1891 and wore many hats throughout his life: architect, artist, designer, author, and publisher. A man of the twentieth century, he was principally occupied with how to modernize the visual and industrial culture around him while preserving those elements which made Italy a respected exporter of fine goods. In 1923, he was appointed artistic manager of the Richard-Ginori, a large porcelain manufactory with roots dating to the eighteenth century. Ponti immediately set out to update the firm’s aesthetics and its manufacturing processes. The goal was to create a product of unquestionably high quality that also reflected the spirit of the current age, and Ponti succeeded on both points. Just two years into his position at the Richard-Ginori, his classically-inspired porcelain had won the Grand Prize at 1925 Paris Exhibition.

For Ponti, this was a triumphant “merging of industry and craftsmanship,” proof that artistry could exist within the factory system of production rather than in alienation to it. “Industry is the style of the 20th century, its mode of creation,” he wrote in 1925, and what he envisioned was an alliance between artisans and industry, where quality of both design and of production were interdependent.

A Vision for the Future

Americans were no strangers to Italian craftsmanship, of course; the American export market had long been critically important for Italian producers. For the most part, however, the sentimental goods they were familiar with were anathema to Ponti and his contemporaries. Ponti detested “the fake antique” and lamented the persistence of nostalgic cathedrals-and-gondolas in American conceptions of Italy.

He was not ashamed of his country’s cultural heritage; though. Since his time at the Richard-Ginori, Ponti (like Piero Fornasetti among other midcentury Italian designers) had a fondness for the elements of classicism, and classical motifs can be found throughout his work. The urn pictured here (to be offered in Freeman’s May Design sale) is a perfect example of Ponti’s remixing of historicist imagery and its modern application on a classic form. 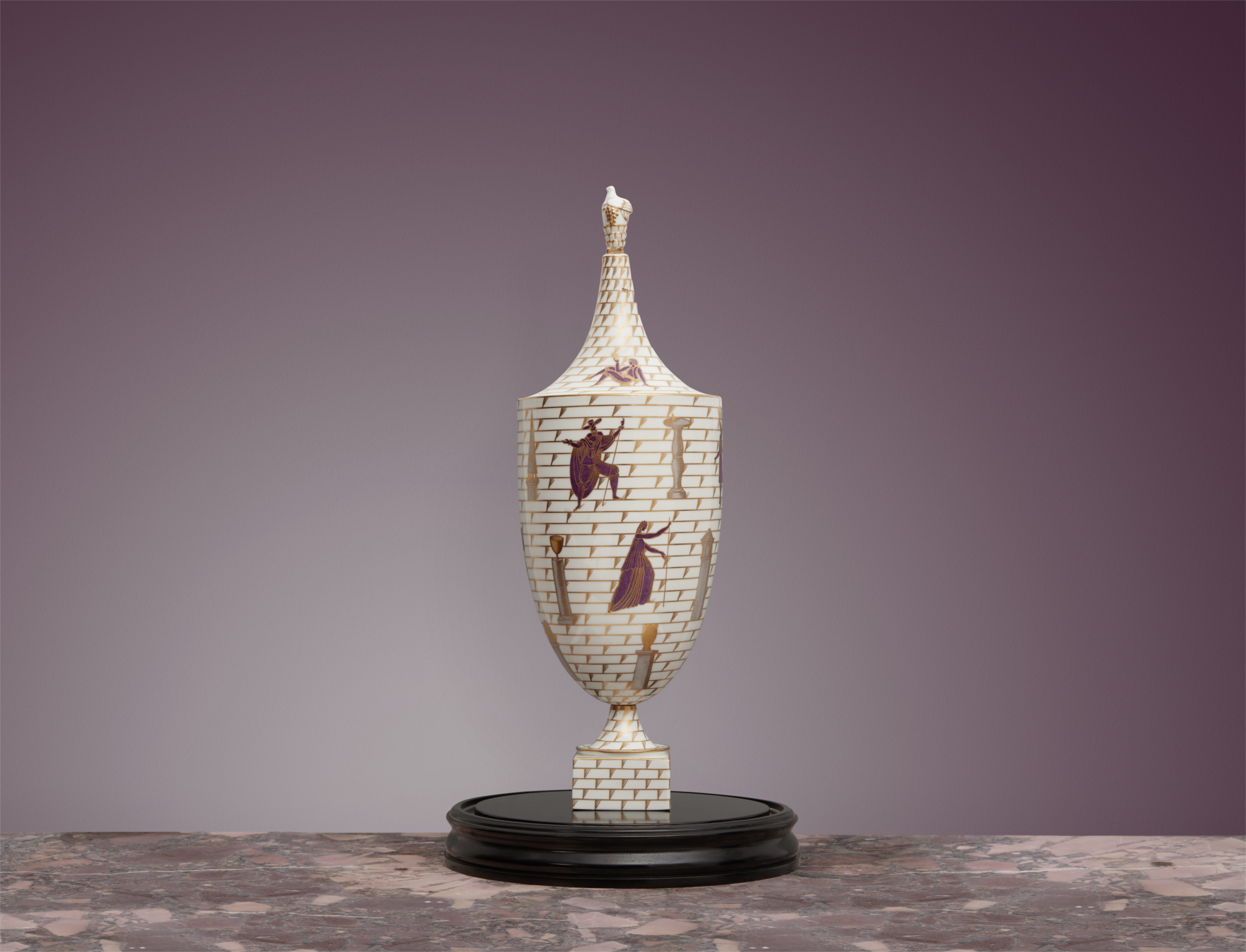 Gio Ponti urn on offer in Freeman's May 12 Design auction.

A Reintroduction to America

After World War II, Ponti was not alone in wanting to promote postwar Italy in America. Via the Marshall plan, both the Italian and American governments were eager to showcase a new vision of democratic, post-fascist Italy, and the nation’s artisans, architects, and manufacturers were similarly keen to participate. A series of prominent exhibitions in the late 1940s and early 1950s (most notably the Italy at Work exhibition, which toured from 1950 to 1953) introduced Americans to a rejuvenated contemporary Italy and its offerings for the home. Ponti hoped that Americans would adapt to the new aesthetics of Italian makers: designers exhibiting in the United States “do not intend that Italian production must adapt to American tastes,” he wrote in 1950, “but rather than the American people will fall in love with Italian things.”

This cultural campaign had extensive commercial involvement. High-end furniture showrooms such as Singer & Sons and Altamira were filled with modern Italian designs from Ponti and others; department stores staged exhibitions and model home interiors for their customers (indeed, the Ponti urn in Freeman’s May Design sale retains its B. Altman label, indicating that it was originally exported to the American market); and prominent academics and journalists celebrated this rebirth of Italian culture for a new era.

A Culture of Collaboration

Ponti’s relationships throughout the middle of the twentieth century speak not just to the ideological commitment of artistic unity, but the integral role architects had in Italian design and decorative arts. At the time of Ponti’s death in 1979, Alessandro Mendini (the editor of Domus, the design magazine Ponti founded in 1928) wrote that “whether Italian architects wish it or not, Ponti was the father of them all and the most unselfish propagator of their culture.”

Ponti personally collaborated with some of the most important names in European craftsmanship. His relationship with Venini and Christofle began in the late 1920s, and he continued to design for Venini through the postwar period and into the late 1960s. Ponti’s elegant furniture was produced over the years through partnerships with various manufacturers, from high-end work for Cassina and Altamira to middle-class offerings for the La Rinascente department store. Ponti believed that everyone deserved access to a modern lifestyle, and that the people making these goods deserved to be proud of their work. Promoting postwar Italian design in the United States was a critical part of realizing these goals, and we are left today with an extraordinary design legacy due to his creativity and efforts.