Three artists who found their muse in musicians at work

On offer in Freeman's June 29 Art and Design auction: works that capture the vibrant energy of live music.

Jean-Michel Basquiat once said that “art is how we decorate space; music is how we decorate time.” The dynamic interplay between art and music forms a history likely as old as humans themselves; artistic talent and creative practice don’t always flow in a single direction.

From Felix Mendelssohn to Joni Mitchell, musicians who have ventured into art have captivated the imaginations of multiple audiences. But what about artists who took musicians as their subjects? Freeman’s June 29 Art and Design auction features several works on paper and prints that draw inspiration from the realm of music. 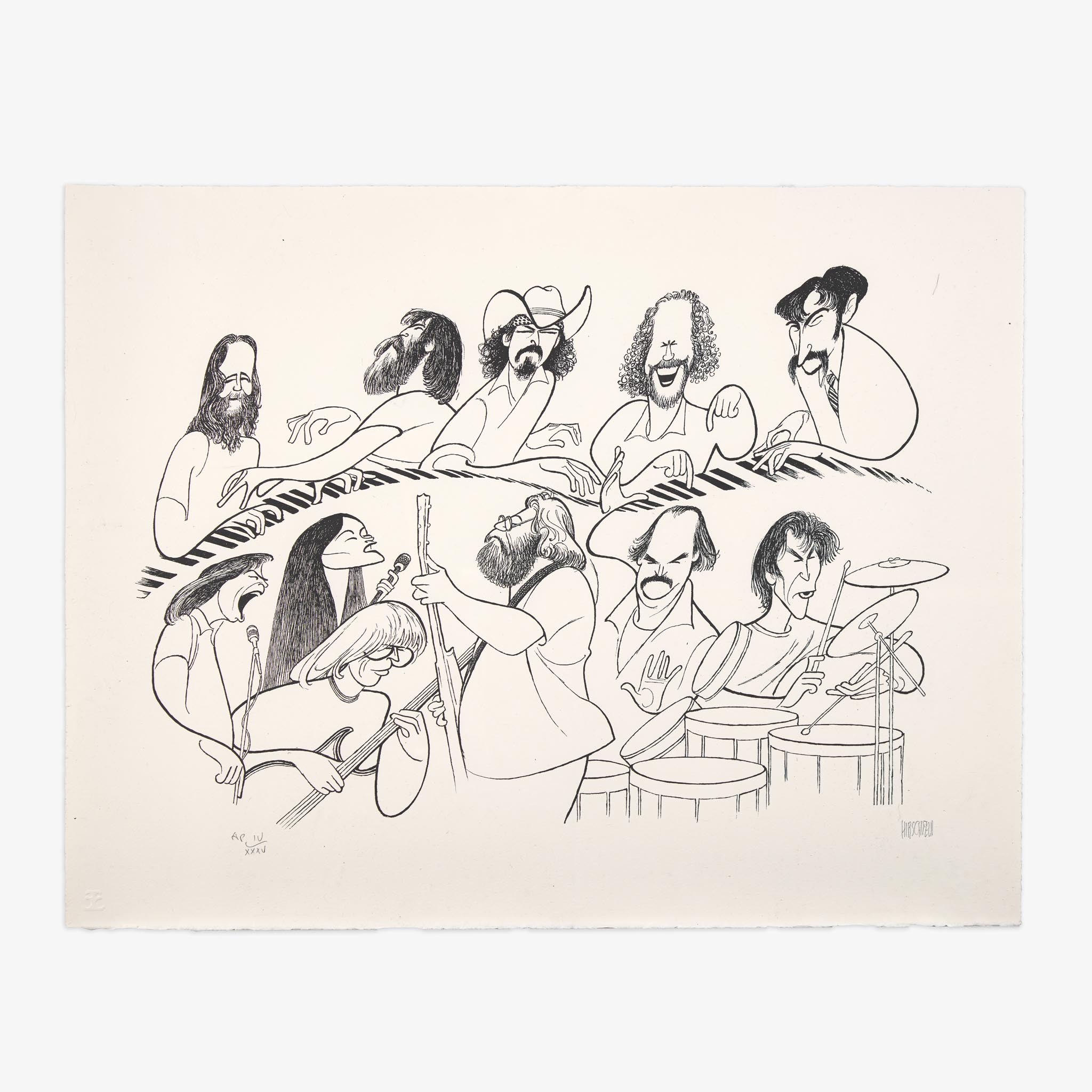 A master of the simplicity and power of the line, American caricaturist Al Hirschfeld often depicted musicians at work; in his charismatic portraits of such musical legends as George Gershwin, Frank Sinatra, and Stephen Sondheim at work, the sound of music nearly spills off the page. The same is true of Hirschfeld’s 1995 The Grateful Dead (Lot 150; estimate: $1,200-1,800), in which the band’s iconic tricolor logo and tie-dyed aesthetic is traded in for clean, dynamic lines. The result captures the ensemble’s musical synchronicity in Hirschfeld’s unmistakable style. 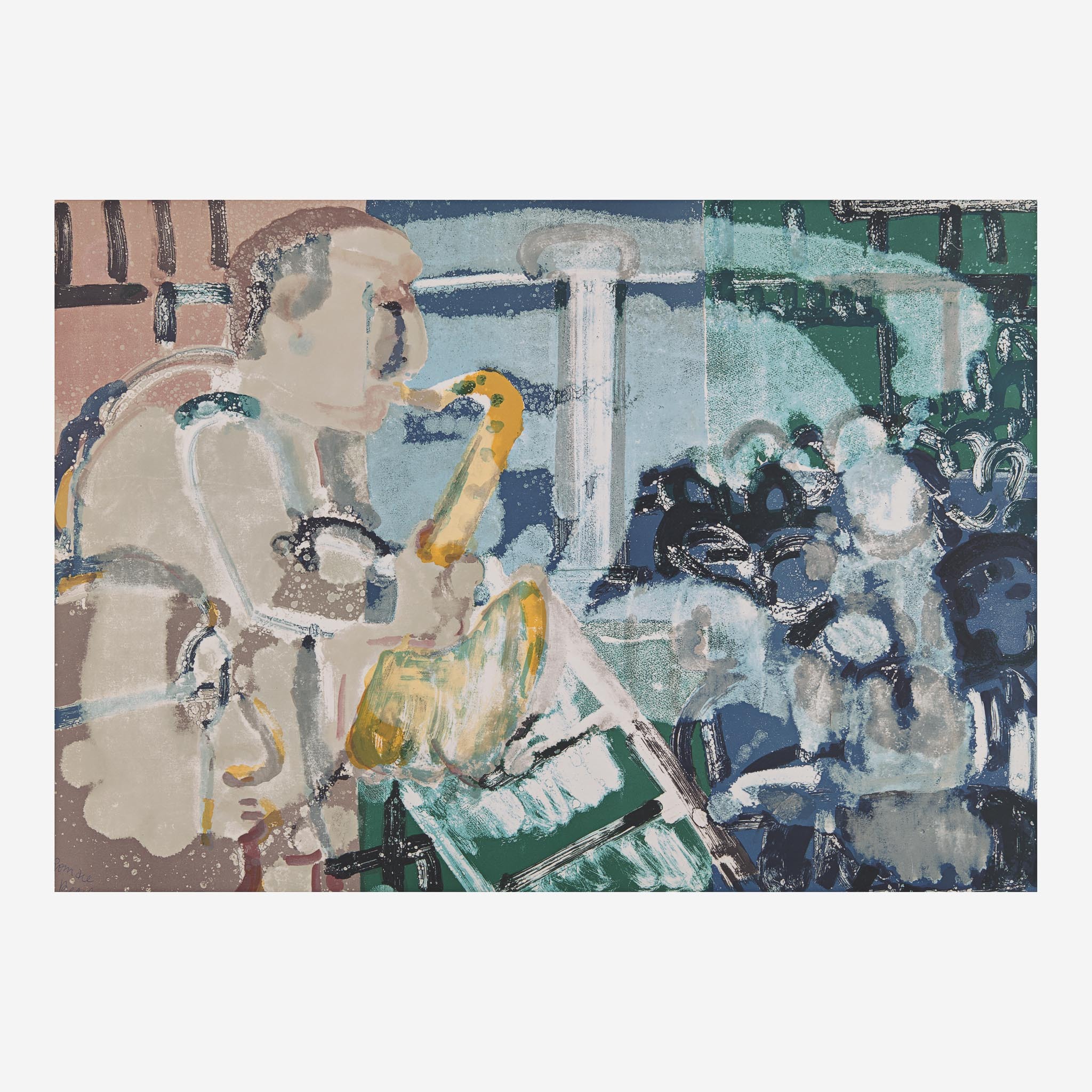 Having come of age in Harlem during America’s Jazz Age and the Harlem Renaissance, it’s perhaps no surprise that Romare Bearden applied his love of jazz to his artistic practice. His evocative ink-on-paper depictions of jazz ensembles featured in Art and Design—Stomp Time (Solo Player) and Tenor Sermon (Lots 56 and 58; estimate: $1,000-1,500 each)—are part of the artist’s Jazz Series, in which the saxophonists and drummers seem to almost blend into the clubs in which they’re playing, lending the work an atmospheric and improvisational quality, much like the musical style it depicts.

Though best known for his evocative paintings, drawings, and collages that dealt with Black life in the American South, Bearden made an impact on jazz history in his own right as a songwriter of “Sea Breeze,” a jazz classic performed by Dizzy Gillespie. Bearden’s work bridged the worlds of work made in what he called the “African idiom” and Abstract Expressionism, which he felt lacked an underlying philosophy. The path he forged instead was truly his own, bursting with life, sound, and color.

Edouard Léon Louis Edy-Legrand, a French painter born just before the turn of the 20th century, knew a thing or two about the interplay of different artistic forms: before his career turned to painting, he made a living illustrating books and advertisements. His pastel-on-paper Three Musicians (Lot 10; estimate: $1,200-1,500) captures a moment of vibrant synchronicity between three figures suspended in a state of collaboration in front of a swirling, mesmerizing background.

Apart from their depictions of musical ensembles, what ties together the artistic lives of Hirschfeld, Bearden, and Edy-Legrand is Paris, where all three lived, worked, or studied in the first half of the 20th century. The time the three artists spent in the City of Lights and their renderings of musicians seems no coincidence: surely all three found inspiration in the city’s cafes, bars, and lively cross-pollination between artists, musicians, poets, and dancers.