Theatrical, high style pieces from the 18th and 19th centuries among much more

Freeman's October 16 sale of British & European Furniture & Decorative Arts including Silver & Russian Works of Art offers a wealth of theatrical, high style pieces from the 18th and 19th centuries. The auction is anchored by several large private collections, including nearly 100 lots from the connoisseur R.M. Barokh, as well as a dramatic assemblage of 19th century objects and furniture from a Virginia Gentleman. There are fine examples of Georgian silver and works by Tiffany & Co., and the Russian section is highlighted with Russian Imperial Ephemera, works by Fabergé, and an important selection of Russian and Soviet porcelain from the private "Ode to Joy" Collection.

For more than 40 years, Ronnie Barokh has been known as one of the great "eyes" of the decorative arts trade. Lots 169-262 reflect his special interest in early furniture, the decorative arts of Italy, and in particular the furniture and decorative arts of the Kingdom of Naples. Notable is Lot 228, a Charles II Chinese lacquered cabinet on Stand from the 17th century (estimate: $12,000-18,000). The piece was formerly in the collection of Jim Williams and stood at "Mercer House" -- his legendary home in Savannah made famous by John Berendt's book and Clint Eastwood's later film, Midnight in the Garden of Good and Evil. 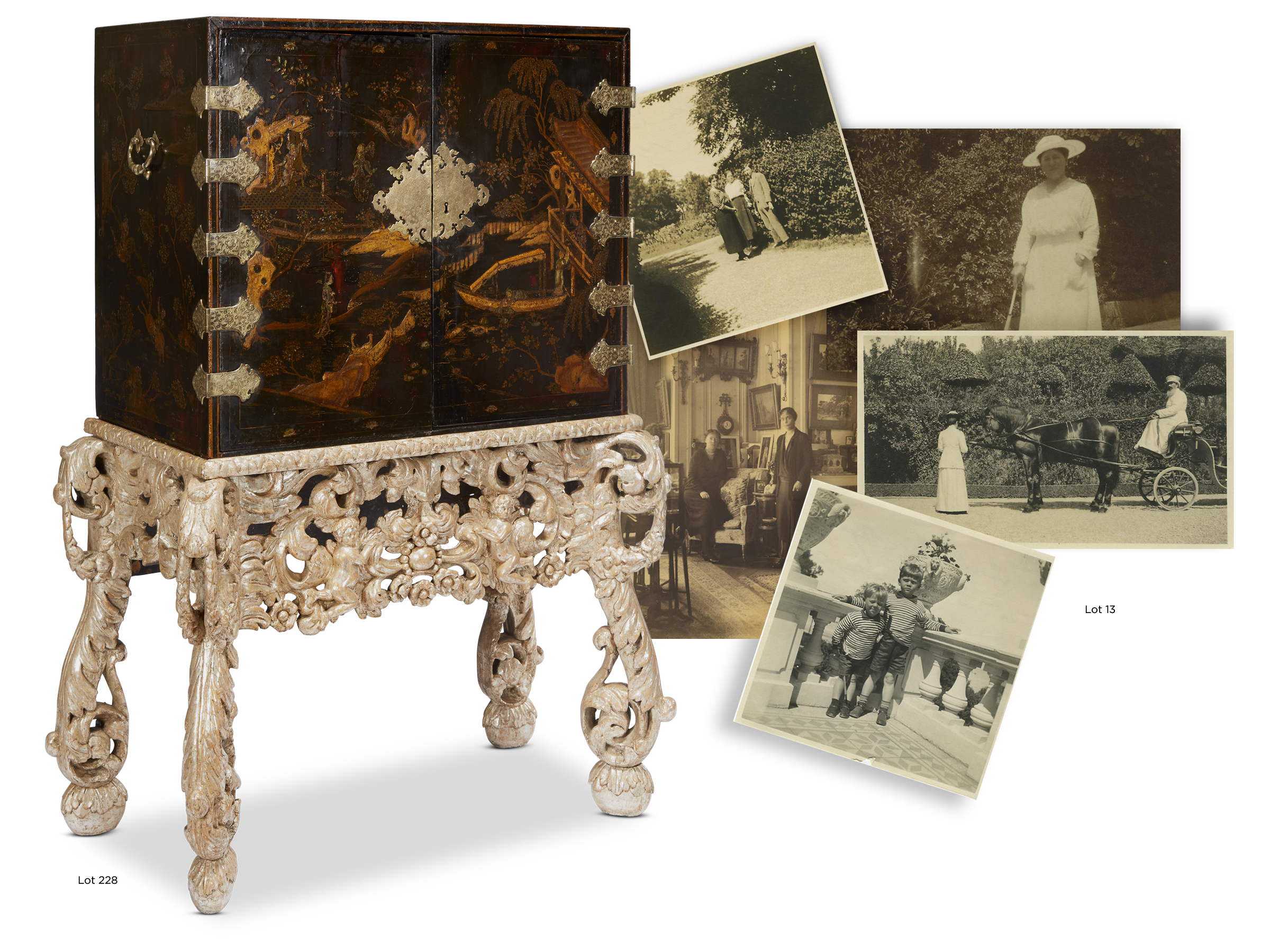 Freeman's is also pleased to offer the Property of a Virginia Gentleman as Lots 420-551, comprising an unusual and comprehensive group of 19th century decorative arts quietly assembled over several decades by a private collector with an eye for opulence. Of particular interest are the many polychromed Venetian figures, the origins of which are to be found in the carvings of Andrea Brustolon (1662-1732).

His elegant boxwood figures depicting North African Moors were emulated throughout the 19th century, and one exceptional pair to be offered is Lot 539, a pair of large Venetian polychromed figural torchères, each finely decorated and with sharply modeled classical features (estimate: $5,000-7,000).

Other highlights include an assortment of silver from the Collection of Samuel Marcus (1908-1989). Marcus had a fondness for English silver, and in the 1960s began assembling a collection of some of the most accomplished silversmiths of 18th century London-Charles Wright, Robert Hennell, Thomas Hannam, and more-alongside early- to mid-20th century pieces by H. Meyen & Co., Georg Jensen, and Gorham. A standout is a fine George II sterling silver swing-handled cake basket by William Cripps, London, 1749 (Lot 144, estimate: $6,000-8,000), with a highly dynamic and heavily modeled Rococo border with large pierced rocailles, flowers, and wheat chaffs. 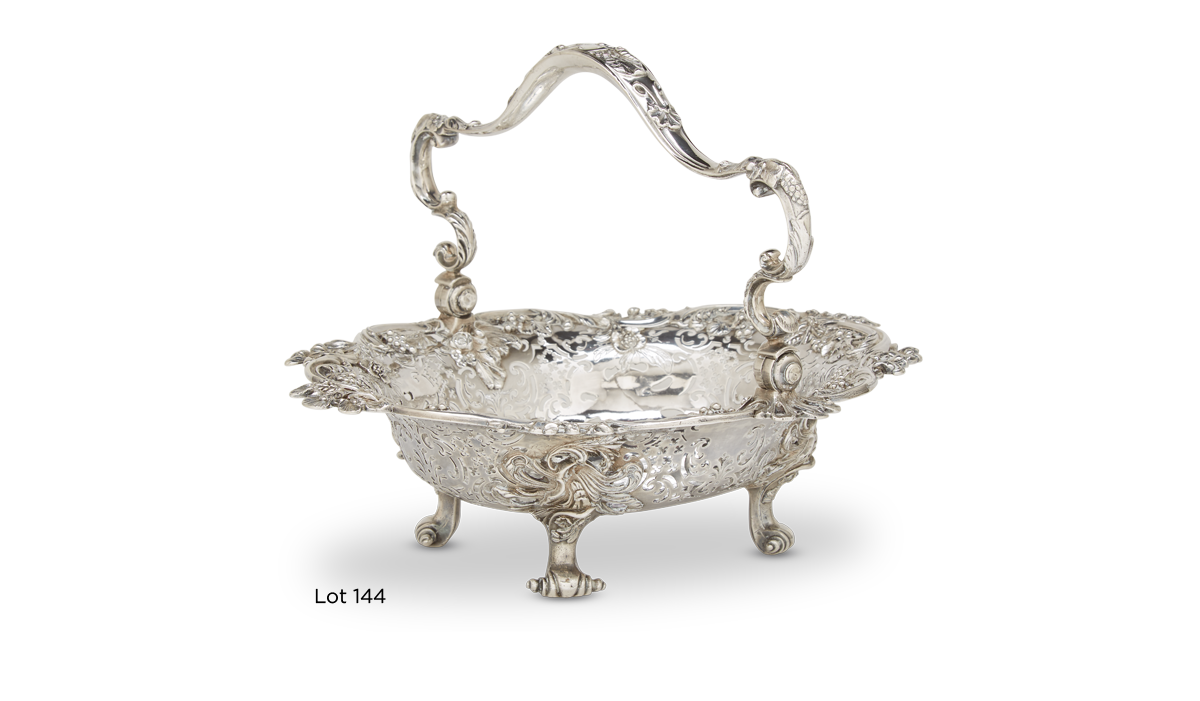 A Louis XV ormolu and varnished-gilt bronze pendule à l'éléphant, after the model by Saint-Germain, comes from the collection of Barry and Rochelle Magarick of Philadelphia (Lot 360, estimate: $8,000-12,000). With a shared passion for the grace and timelessness of early 19th century classicism, the Magaricks filled their elegant Federal Philadelphia townhome with antiques and paintings from Empire France, Regency England, and early America. Shrewd buyers with a discerning eye, the Magaricks bought from Paris, London, and New York dealers, as well as from small and large auction houses worldwide, and now present a selection of their beloved pieces as lots 349-374.

The private, Connecticut-based collection of works from the "Ode to Joy" (??? ? ???????) Collection of Russian and Soviet Porcelain is well-known as arguably the finest assemblage of Soviet porcelain outside of Russia. Many of the lots have been exhibited at the State Pushkin Museum of Fine Arts, Moscow, the Tretyakov Gallery, Moscow, and the Hillwood Museum of Washington DC. Lots 21- 68 demonstrate the development of Russian porcelain, featuring works by Natalia Danko, Asta Brezhitskaya, Kazimir Ryzhov, and Dmitri Goch. The work of the Lomonosov State Porcelain Factory of Leningrad is well represented, and several rare works from other factories are included. Of exceptional interest are Lots 43, a Soviet porcelain group "On Guard: Boy Directing Border Guards to Spies," (estimate: $3,000-6,000) and Lot 47, an important Soviet porcelain group "Monumental Composition In Honour of Stalin's 70th Birthday" (estimate: $5,000-7,000).

Also of note in the Russian section is Lot 13, "The Dowager Empress' Archive" (estimate: $15,000-20,000). This important group of photographs from Dowager Empress Maria Feodorovna (1847-1928) were preserved by her maid, Mlle Caecilia Grunwald. The exceptionally rare group contains never-before published images of private family photographs of the Dowager Empress, and several detailed large format images of the interiors of "Hvidøre," the Danish house shared with her sister, Queen Alexandra of Great Britain, in which important individual works of fine and decorative art, including works by Fabergé, are visible and identifiable under magnification.