Freeman's September 7 Asian Arts auction will offer buyers a selection of nearly 650 lots of fine Chinese, Japanese, Burmese, Tibetan, and Korean decorative objects and works of art. Ranging from as early as the Neolithic period to present day, the breadth of material represented in the sale is sure to appeal to novice and experienced collectors of Asian art, decorators, and dealers.

An impressive highlight of the sale is a large Chinese carved wood figure of Samantabhadra, seated on an elephant, from the Ming Dynasty or earlier (Lot 196, estimate: $25,000-35,000). Composed primarily of three large joined and carved timbers, the deity is seated at royal ease on a large elephant, dressed in draped scarves and bodhisattva jewelry. The present lot is unusual, not only for its large size, but also for the fact that the bodhisattva wears a crown incorporating a seated Buddha, which usually identifies a bodhisattva as Guanyin, as well as assuming a pose akin to "Water-Moon" Guanyin. The figure comes from a private collection in Pennsylvania.

Earlier in the sale-though produced more than four hundred years later-is a photograph by Korean artist Bae Joon-Sung titled "The Costume of Painter – Whistler" (Lot 149, estimate: $20,000-30,000). The photograph of the female nude is accompanied by a painted with the model's dress, based on the painting "Symphony in Flesh Color and Pink, Portrait of Mrs. Frances Leyland" by James Abbott McNeill Whistler. The present lot is part of the extensive series of works by Joon-Sung exploring the contrast between well-known European paintings of the Belle époque, and their re-imagination with Asian female nudes, presented in such a way that the subject's nudity is revealed only through the movement or actions of the audience. 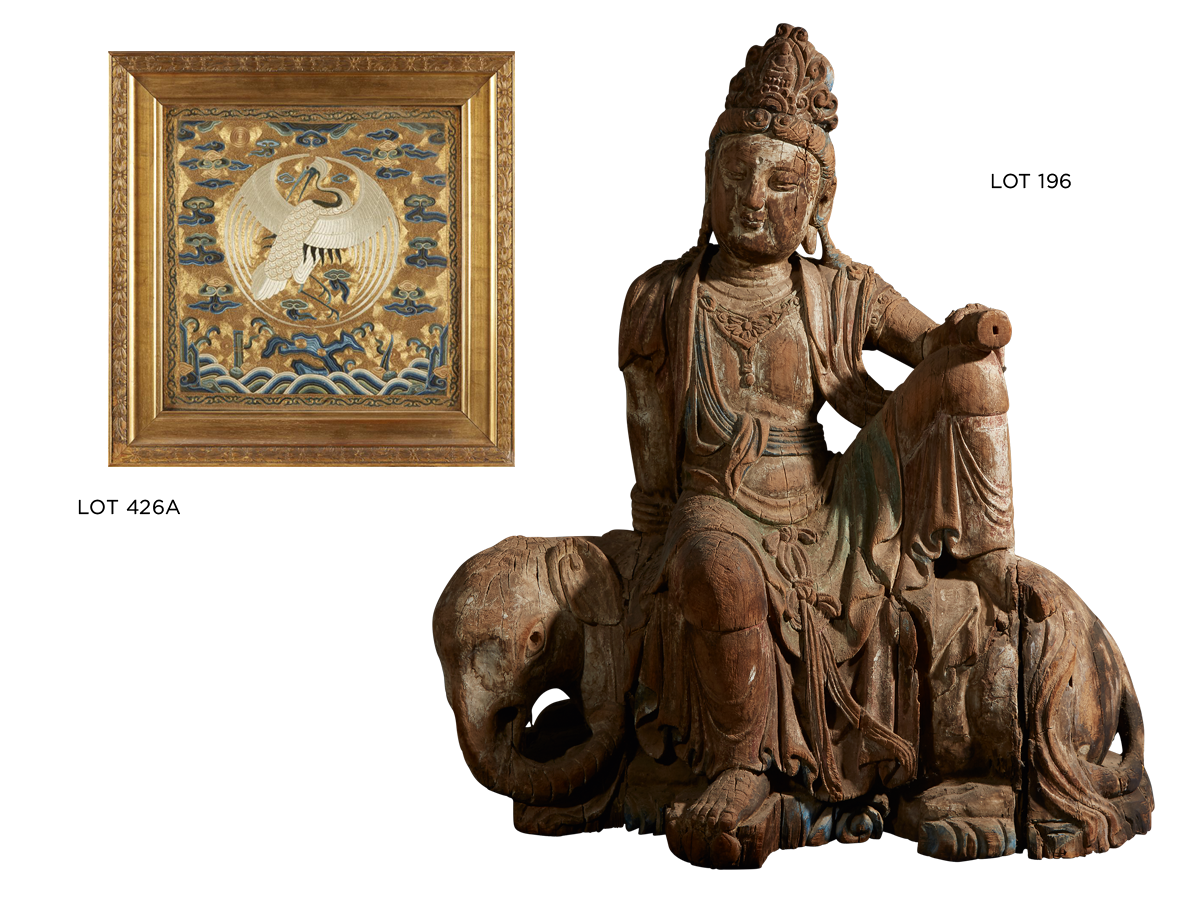 The sale opens with a fine selection of Japanese prints and lacquer objects, including a Rimpa style pewter and mother-of-pearl-inlaid lacquer box and cover (Lot 35, estimate: $2,000-3,000).

There are also more than 50 items from the Philadelphia Collection of Ann and Don McPhail, including Lot 199, a Chinese carved and painted figure of Guanyin seated in royal ease (estimate: $3,000-5,000), and an Indian carved and painted wood figure of a Brahma bull, on a wood base with silk tassels (Lot 156, estimate: $1,500-2,500).

The sale also offers an assortment of Chinese ruyi scepters, including Lot 328, an elaborately carved example from the Qing Dynasty (estimate: $10,000-15,000), and Lot 213, of parcel-gilt cloisonné from the Qianlong period (estimate: $5,000-7,000). In Chinese culture, the ruyi scepter has a long history not only as a congratulatory gift, but also as a symbol of authority. In China, the term "ruyi" is a homophone for "As you wish" or "As you desire," making the gift of a ruyi scepter a way to convey wishes for good luck or congratulations, often for auspicious birthdays or significant promotions.

Additional highlights include Lots 115 and 116, an unusual and impressive Japanese "Floral" shibayama spherical koro ($6,000-8,000), and an impressive Japanese parcel gilt and mixed metal patinated bronze koro and cover, ($8,000-12,000), respectively. Both lots are from the Meiji period (1868-1912). Also of note are a Korean calligraphy-inlaid and iron mounted stained wood chest from the Joseon Dynasty, constructed of heavy timbers with substantial pierced iron hardware (Lot 139, estimate $800-1,200), and a Daoist devotional painting from the Ming Dynasty, ink and color on silk, mounted as a hanging scroll (Lot 592, estimate $8,000-12,000). The Chinese painting would have been one of three hanging scrolls, each depicting one of the three highest deities in the later Daoist pantheon. 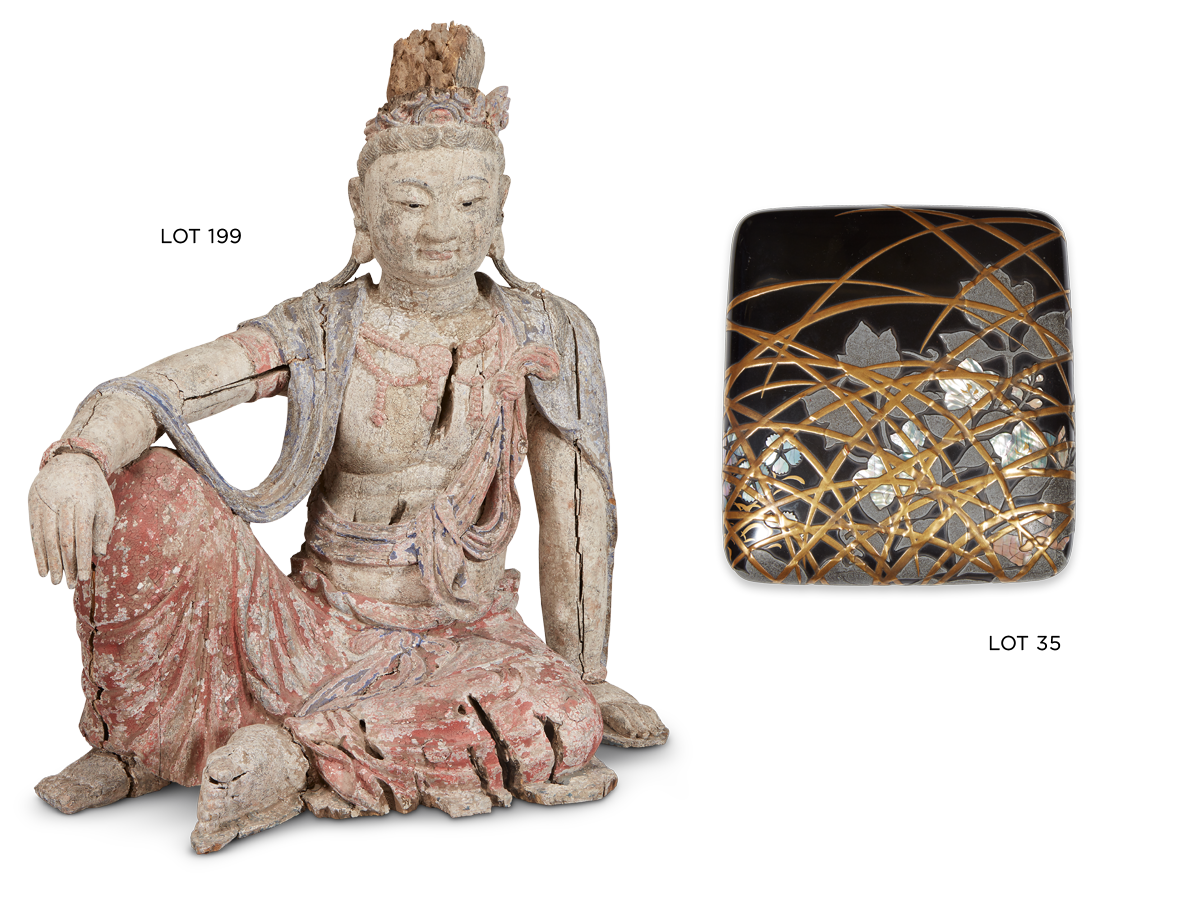 "The sale is noteworthy not only for the broad range of works offered," said Ben Farina, Head of Asian Arts, "but also for the number of unusual works from a variety of cultures and media."