A History of Tea in China and Japan

Consumed mostly for its perceived medicinal purposes, tea was even considered “the froth of the liquid jade” by Chinese philosopher Laozi, who deemed it an integral part of the elixir of life.

Tea is the most widely consumed beverage in the world, second only to water. Tea traces its origins to Ancient China, when, in 2732 B.C. the Emperor Shen Nung is said to have discovered it by accident: leaves from a nearby tree, carried on a gust of wind, landed in a pot of boiling water. The Emperor was so taken with its alluring scent, that he drank the resultant brew. Legends aside, the earliest concrete evidence that tea was a part of Chinese culture as far back as the Han Dynasty (2nd century B.C.) came when Camellia tea was found in the mausoleum of Emperor Jing of Han in Xi'an. Tea appeared in several significant ancient texts, and its cultivation in Chengdu dates back to the Ganlu era (75 B.C.). Consumed mostly for its perceived medicinal purposes, tea was even considered "the froth of the liquid jade" by Chinese philosopher Laozi, who deemed it an integral part of the elixir of life.

It was in the Sui Dynasty (589-618 AD) that Buddhist monk Eichu, returning from China, introduced tea to Japan. The monk is said to have personally prepared unground green tea (called sencha) for Emperor Saga in 815. Not long after, tea was planted and cultivated in southern mainland Japan. In the 12th century, another monk returning from China, Eisai, brought tea seeds with him and introduced the tencha style of tea-powdered match whisked with hot water-to his homeland.

“Quickly, the act of drinking tea developed into a ceremony and spiritual practice, born and adapted from the religious rituals of the Buddhist monasteries.”

Quickly, the act of drinking tea developed into a ceremony and spiritual practice, born and adapted from the religious rituals of the Buddhist monasteries. The aesthetics surrounding the art of making and drinking tea are defined by the principle wabi-sabi, which represents a spiritual serenity and quiet focusing on simple, unadorned spaces, and appreciating the beauty in the imperfect and impermanent. 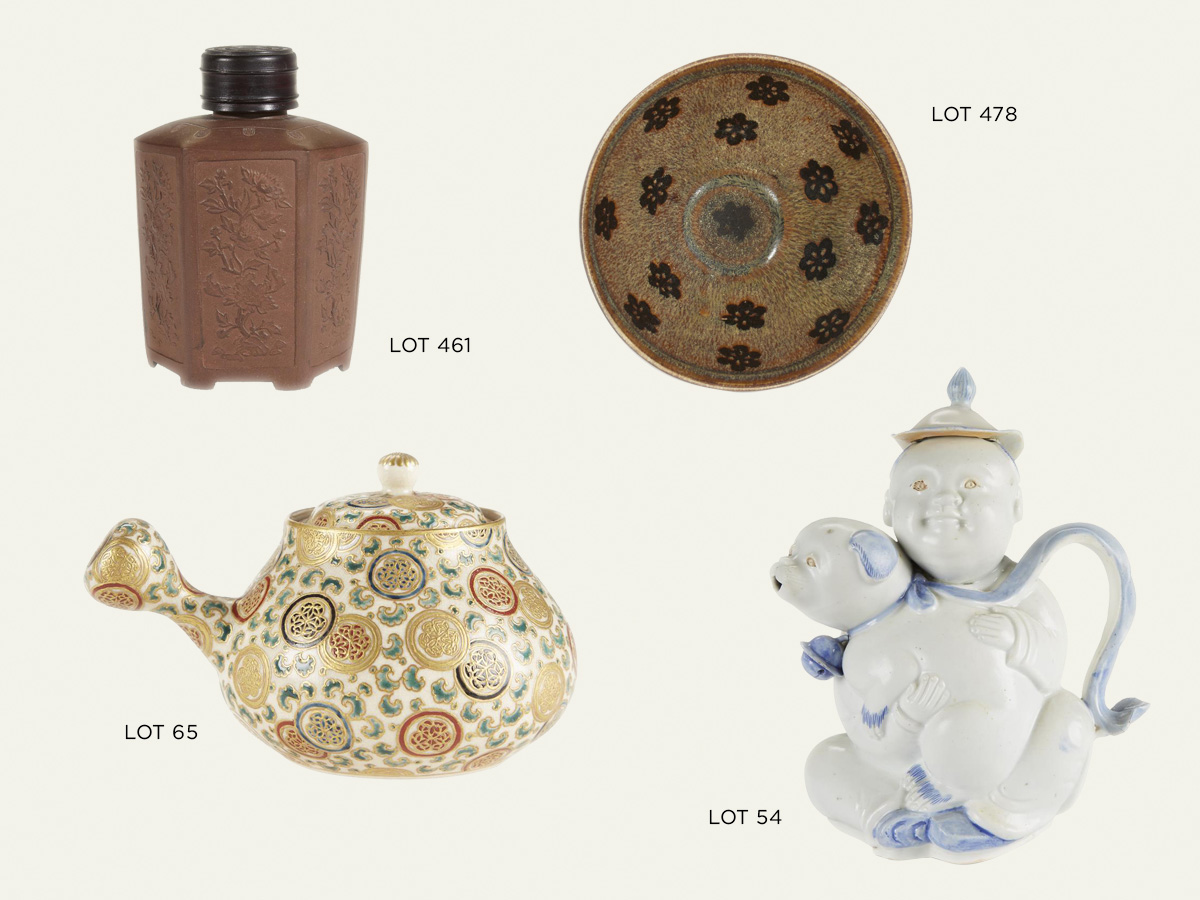 Performed in a chashitsu (a room specifically built for the tea ceremony) with tatami floors (rice straw mats) the Japanese tea ceremony involves several essential pieces of equipment and utensils, including a tea whisk and scoop, both made of bamboo. There are predefined, ritual steps at all stages of preparation, presentation, pouring, and consumption, and while these can differ according to the time of year the chanoyu (ceremony) is performed, the movements and gestures of the host are always considered with the guest in mind.

On September 7, Freeman's Asian Arts auction will offer buyers a selection of nearly 650 lots of fine Chinese, Japanese, Burmese, Tibetan, and Korean decorative objects and works of art. Notable among these are more than a dozen lots of Japanese and Chinese tea wares, including Lot 478, a Chinese Jizhou cut paper-resist "Blossoms" tea bowl, from the southern Song Dynasty (estimate: $3,000-5,000). Called chawan, these were used for preparing and drinking tea, and come in many variations of size and design. Lot 65, an enameled Satsuma-type teapot and cover from the Meiji period, decorated with medallions (estimate: $1,000-1,500), and Lot 54, a Hirado blue and white porcelain "Boy and Puppy" teapot and cover (estimate: $700-900), both hail from 19th century Japan. An unusual famille rose-decorated porcelain "Double Budai" teapot (Lot 433 , estimate $2,000-3,000) will also be offered.

In addition, there are several Chinese Yixing teapots and caddies, including and a collection of six small teapots and a stoneware tea caddy (Lot 452, estimate $1,200-1,500); Lot 456, an enameled stoneware pewter-mounted teapot (estimate: $500-800); Lot 461, a molded hexagonal tea caddy with later turned wood cover, from the Qing dynasty (estimate: $400-600); and a collection of eight teapots (Lot 460, estimate $600-800), comprising one inscribed with poem and a ding and seven various "gongfucha" teapots.