Munnings ' numerous horse scenes gained the reputation of being amongst the greatest of the twentieth century. But the artist also painted very personal interpretations of the English landscape, as well as memorable portraits of the people close to him – a trend illustrated by two paintings offered in Freeman 's February 27 auction of European Art & Old Masters: 500 years.

The son of a mill worker, Sir Alfred Munnings spent most of his life in the village of Dedham, on the Suffolk-Essex border, where he was influenced by Impressionism and started painting outdoors. Munnings favored naturalistic colors to depict the surrounding countryside and adopted quick brushstrokes in order to capture the ever-changing light of his surroundings. After serving as a War Artist for the Canadian Cavalry Brigade, Munnings' formidable talent soon became apparent, and from 1899 onwards he would exhibit at the Royal Academy, before eventually becoming its President in 1944. 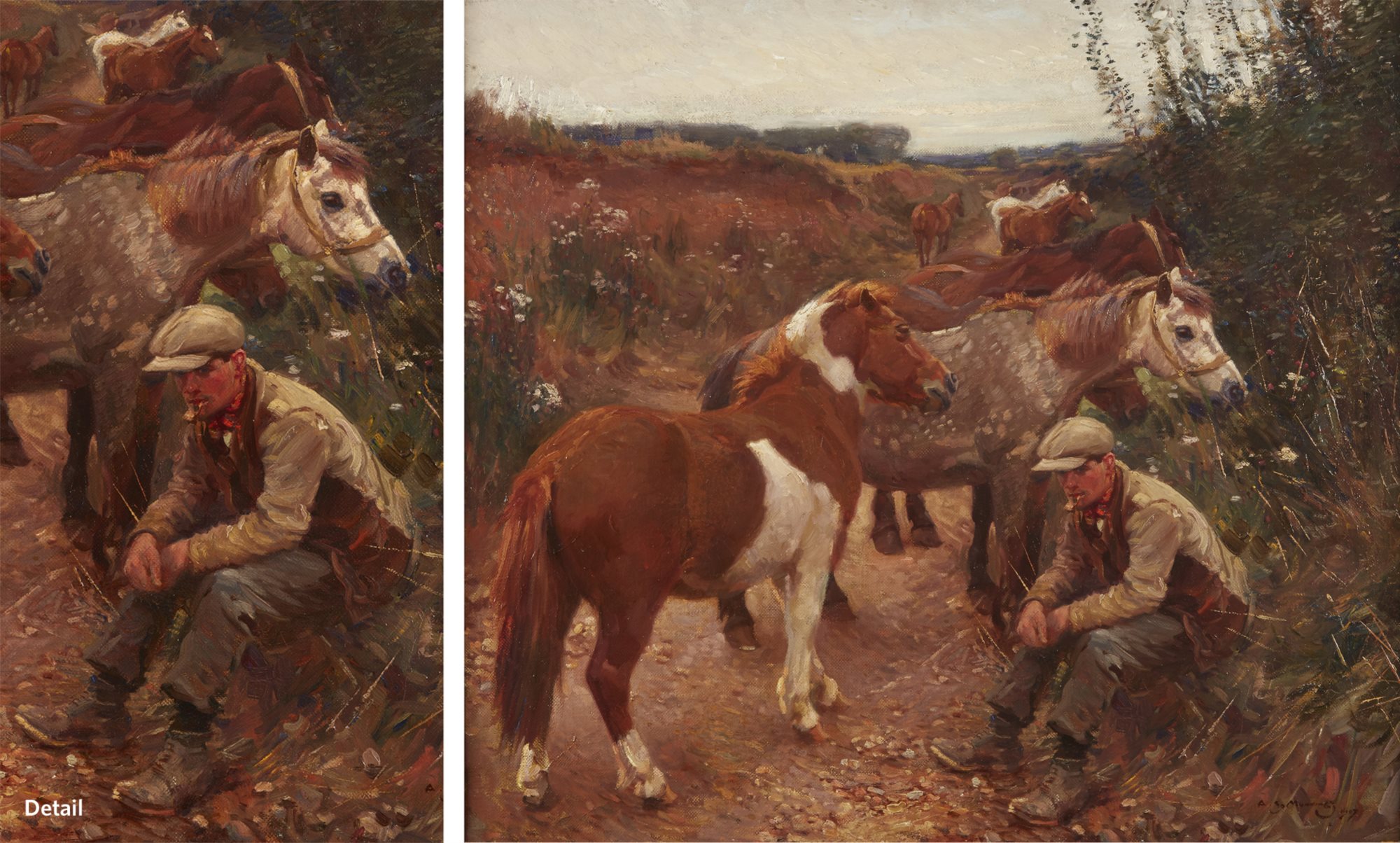 THE CALL FOR ADVENTURE

Starting in 1907, Munnings went on extended painting expeditions with several of his stable boys to the Ringland Hills, in the Norfolk region. With their untouched lands and serene views towards the distant wooded parklands, the Ringland Hills had everything to please Munnings. There, in complete harmony with nature, he confessed: "Nobody cared and I was at peace." Dated 1907, Irish Ponies in a Grassy Lane is one of the earliest compositions of this series, which Munnings continued to explore until 1911. It depicts George Curzon, the artist's faithful and enduring groom, who sat for many other oils by Munnings. With its sense of care and attention to detail, the painting stands as one of the most achieved compositions of the artist's early career.

Like many Victorian artists before him, Munnings was fascinated by the unconventional lifestyle of the gypsies he would meet while exploring the English countryside on horseback. Their colorful wagons and elaborate costumes fascinated the artist, who enjoyed painting the same members of gypsy families more than once, as exemplified by the two boys in "Two of Them," whom the artist had already captured with their greyhounds. Contrary to his Victorian ancestors who saw the gypsies as a subject of fear and superstition, Munnings considered them a poignant symbol of England's rural life, who resisted industrialization and urbanization. He celebrated their roles as perpetuators of an authentic and simple life.