How to Collect 20th Century and Contemporary Design: Your Guide to Upcoming Highlights

Learn about some of the upcoming highlights in our June 8 Select Design Auction.

Whether you’re a new collector seeking an affordable entry point or a seasoned expert looking for a fresh addition to your collection, Freeman’s auctions offer a range of options. With focused insight from our specialists, our Collector’s Guides help you navigate the market to find the perfect piece. Here, Freeman’s 20th Century and Contemporary Design department weighs in on highlights from its upcoming auction. 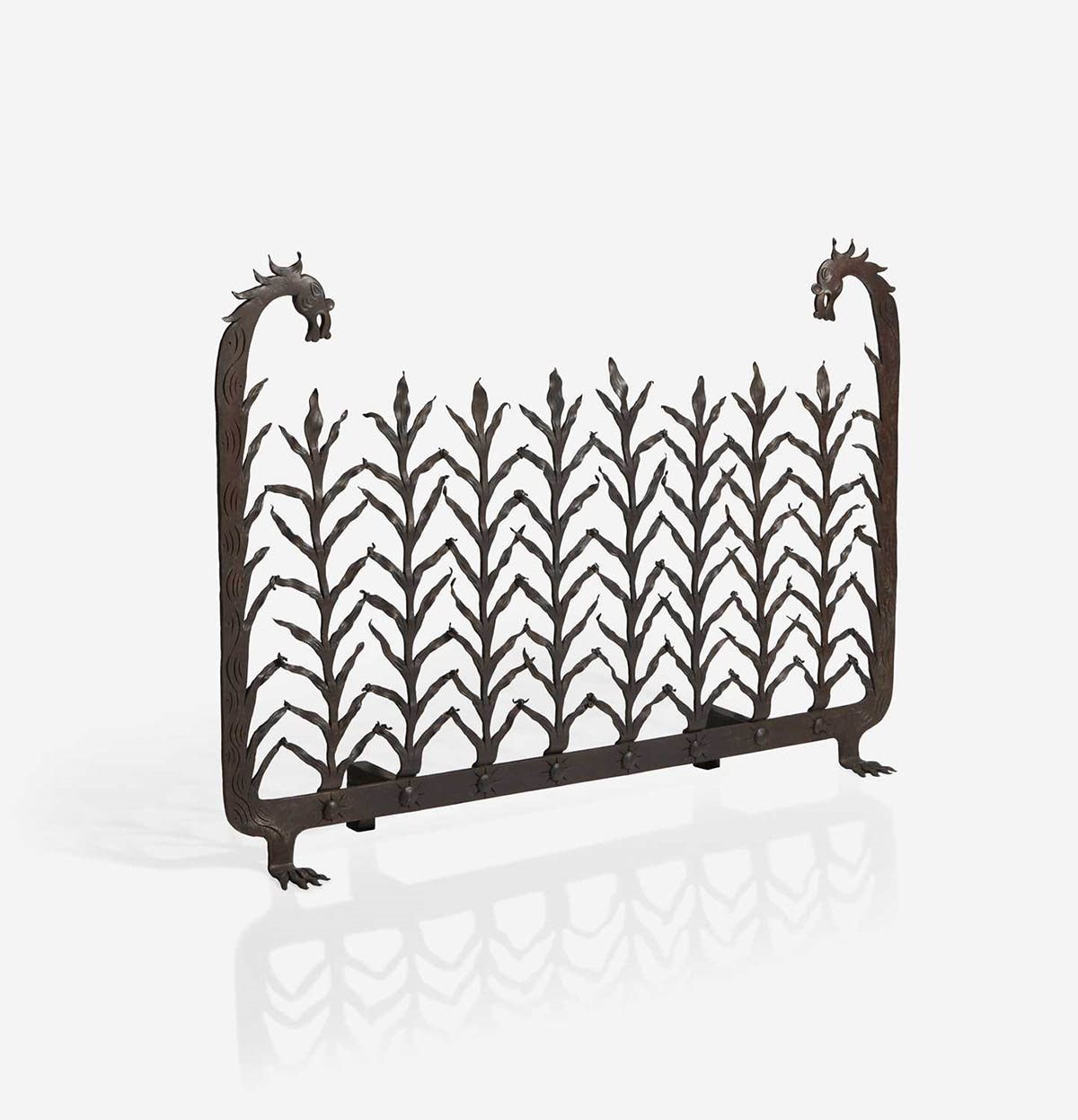 Based in Philadelphia, Samuel Yellin was one of America’s most prodigious and important artistic metalworkers of the 20th century, a man who spoke of the “poetry and rhythm of iron.” It’s clear to see what Yellin was referring to in his exquisite wrought iron firescreen offered in Freeman’s June 8 Select Design auction (Sold for $40,950). The screen’s construction and design stands apart from other known Yellin examples, notably the fairly delicate gauge of iron (not greater than ¼ inch throughout) and a striking silhouetting of the design in two dimensions. The U-shaped structure frames a zoomorphic design of twin dragon head terminals with flared nostrils, raised above a pair of four-claw feet.

The firm of Samuel Yellin Metalworker created all manner of metalwork—largely in iron—for public commissions and private residences, and nowhere is its influence more apparent than in Yellin’s adopted city of Philadelphia, where buildings such as the Packard Building, Curtis Institute, Federal Reserve Bank, and Sketch Club all bear Yellin’s signature ironwork. This firescreen marks even further evidence of the firm’s spectacular range of designs—all of which took shape in Philadelphia.

A Postmodern Cup of Tea 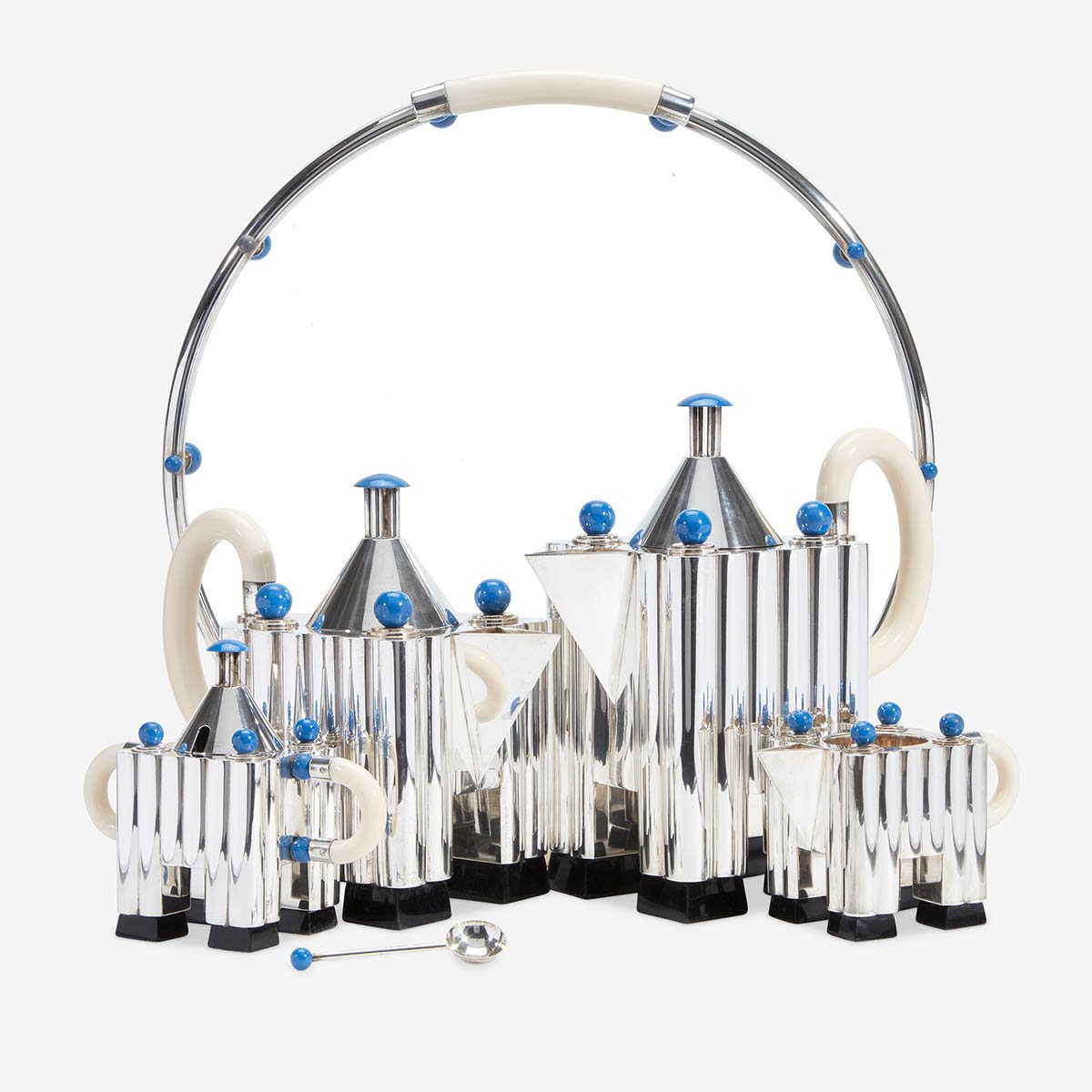 If Samuel Yellin wove his studio’s metalwork into the fabric of the city, Michael Graves brought the architecture of the city indoors. Graves’s playful five-piece “Tea and Coffee Piazza” set, produced by the Italian design firm Alessi in 1983, more closely resembles a city center than the silver tea sets of a bygone era (Sold for $20,160). The product of an invitation from Alessi to eleven leading architects and designers to create a tea and coffee service, the set—wrought in silver with faux ivory handles, bakelite feet, and blue-lacquered aluminum spheres—is a unique Postmodern gem.

The set also marked a turning point in Graves’s career, after which he was known not just for his architectural innovations but for the production of beautifully designed, high-end housewares. After Graves designed the “Tea and Coffee Piazza,” Alessi again commissioned a design from him, this time for a kettle, the iconic design of which has stood the test of time and has become synonymous with Alessi to many consumers. Select Design offered the opportunity to collect this rare set—one in an edition of 99, sets of which have been featured in the collections of the Indianapolis Museum of Art, the Detroit Institute of Arts, and the Henry Ford Museum. 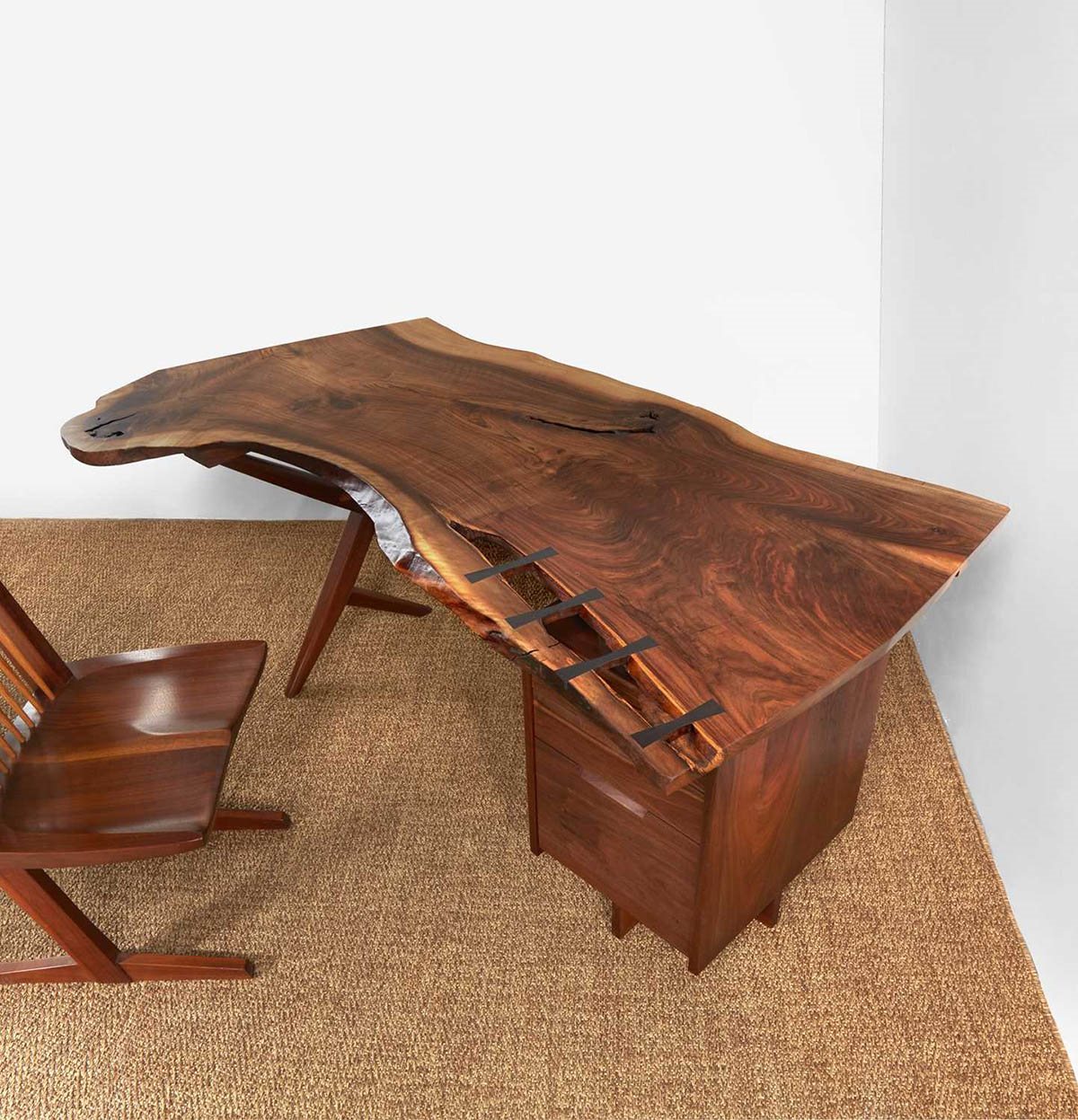 Freeman’s is well-known for our presentation and sale of works by George Nakashima; in 2020 alone, we sold 67 works by the renowned New Hope furnituremaker. Select Design underscored this reputation for our careful stewardship of Nakashima furniture—in fact, over half the lots in the auction were works by Nakashima. An undoubted highlight was an exceptional 1961 “conoid” desk, in which a striking asymmetrical design is rendered in English walnut, American black walnut, rosewood, and hickory (Sold for $75,600).

The work of Nakashima, who began his career by studying forestry, is a paean to the natural landscape of the Bucks County environs where he lived and worked. In his 1987 book The Soul of a Tree, Nakashima wrote, “When trees mature, it is fair and moral that they are cut for man’s use, as they would soon decay and return to the earth. Trees have a yearning to live again, perhaps to provide the beauty, strength and utility to serve man, even to become an object of great artistic worth.” This “conoid” desk—as well as the other ten Nakashima lots offered in Select Design—characterize this marriage of utility and beauty, serving both as exquisite sculptures and as monuments to the work and play of everyday life.

View the results of our July 8 auction.