How a Russian Imperial Tankard Became Part of Philadelphia History

A token of gratitude for American aid efforts

This ornate tankard made its way from Imperial Russia to a prominent Philadelphia family at the turn of the 20th century.

Freeman’s February 24 auction, The Gilded Age, featured an impressive silver-gilt plique-à-jour and cloisonné tankard, crafted in 1892 by the firm of Pavel Ovchinnikov. One of the most famous jewelers and silversmiths working in nineteenth century Imperial Russia, Ovchinnikov was commissioned regularly to create diplomatic gifts on behalf of the Tsar. That heritage alone would make this tankard an object of historic importance in addition to its beauty. As the letter accompanying the tankard makes clear, it is also an important piece of Philadelphia history, tied to our city’s professed values and the internationalist worldview of its leading citizens. 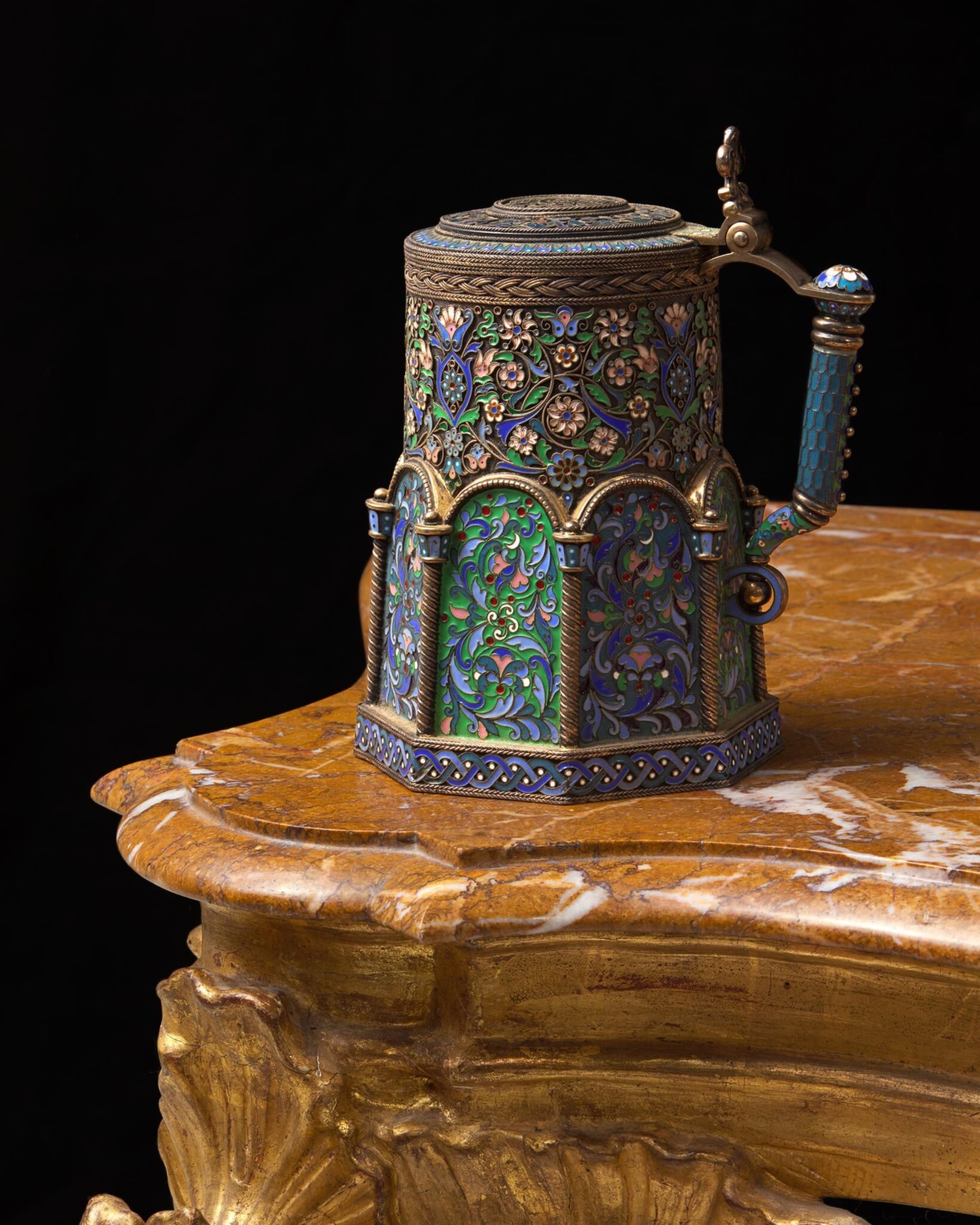 The presentation of this tankard to Dr. Alexander W. Biddle (1856-1916) was in gratitude for services provided to Russia during the famine of 1891-92. Poor harvests throughout the 1880s had taken a deep toll on the agrarian peasantry of Imperial Russia, and when drought arrived in the middle of 1891, it was devastating. Nationwide relief efforts began across America, including representatives of Philadelphia’s business and social elite. A Russian Famine Relief Committee of Philadelphia was organized on January 31, 1892, and it included such prominent individuals as future mayor Rudolf Blankenburg and banking scion A.J. Drexel Jr. 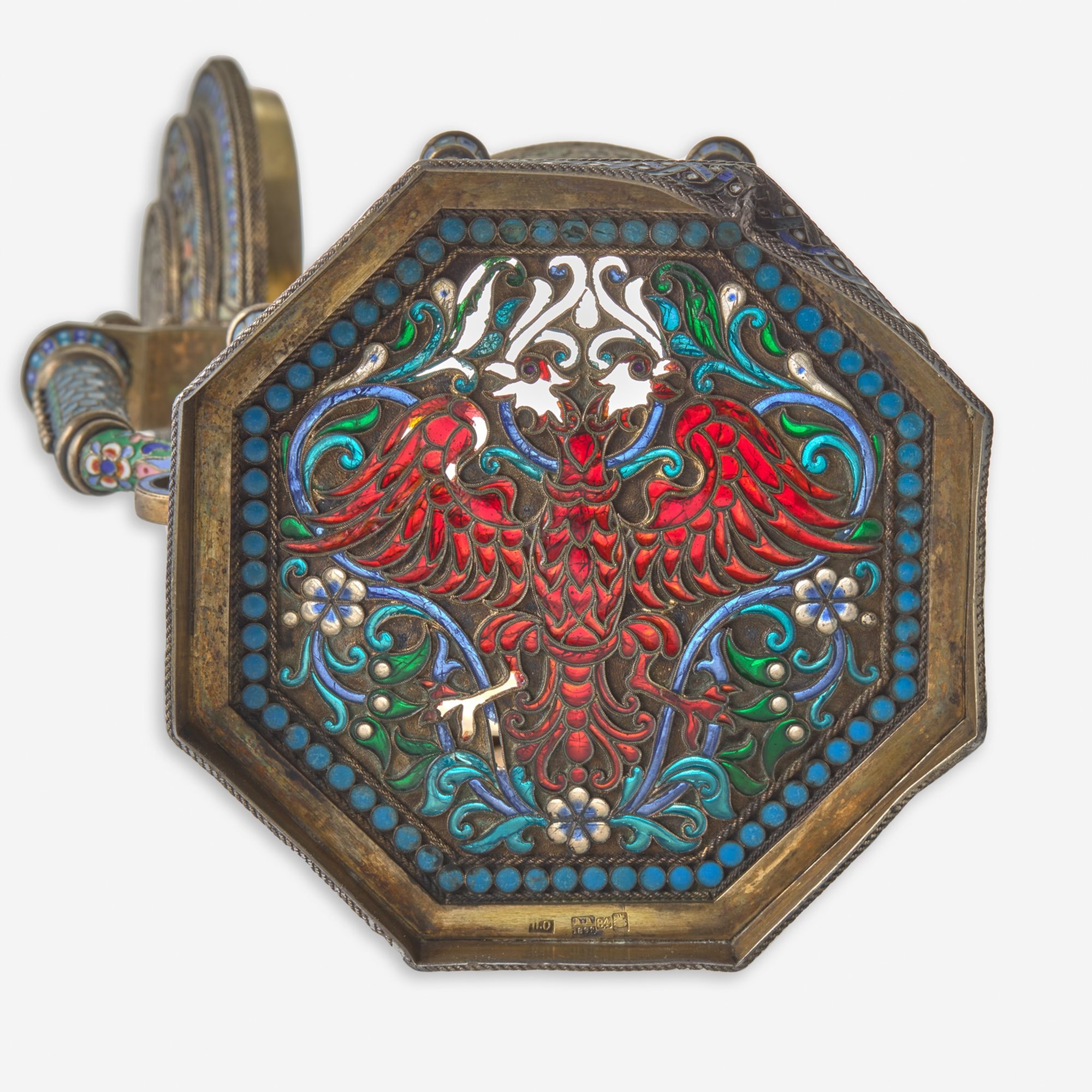 Philadelphia was the first city to fund, organize, and dispatch a ship (the Indiana) filled with flour and other provisions, doing so in less than a month. The Indiana left Philadelphia on February 22, 1892, and arrived in Libau (the Russian Imperial name for Liepāja, Latvia) on March 16. It would not be arriving without an escort. A March 23, 1892 letter from Charles Emory Smith, the American Minister in St. Petersburg, to Secretary of State James G. Blaine notes that “the members of the Philadelphia committee, Messrs. Blankenburg, Drexel, and Biddle, reached Russia in advance of the steamer, and, after examining and approving the arrangements made here, two of them proceeded to Libau.”

While Blankenburg went to one of the famine districts, Biddle and Drexel went to Libau to meet the Indiana. Having “sailed from the Washington Avenue wharves on Washington’s birthday,” the grain-laden ship represented Philadelphia’s highest and noblest vision of itself. For “when did any other ship ever sail across the broad Atlantic in which so many hearts were interested? The rich and the poor united in the Indiana’s argosy of love.” The sentiment was apparently mutual: a great crowd greeted the Indiana at the Libau docks. “Crowds cheered, steam whistled screamed, bands of music played, small cannon boomed, while earnest prayers ascended silently from many hearts.”

The American aid efforts left a mark not just on the Russian populace and state apparatus, but the Imperial Family as well. At the close of his tenure as the American ambassador that April, Minister Smith had an audience with the Tsar, Alexander III. “Speaking with great deliberation, gravity, and emphasis, His Majesty said: 'I am very much touched by the interest and kindness which the people of the United States are showing in sending ships of flour to my suffering people,'” Minister Smith recalled. 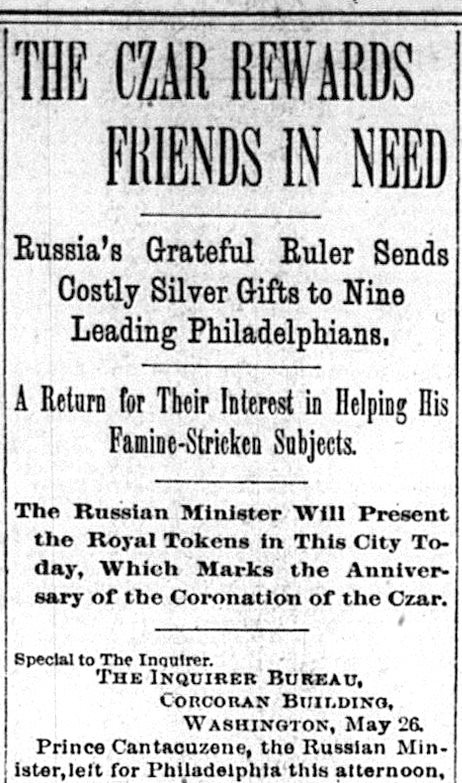 This would not be the last of the Tsar’s signs of appreciation. “The Czar Rewards Friends In Need: Russia’s Grateful Ruler Sends Costly Silver Gifts to Nine Leading Philadelphians” read the front page of The Philadelphia Inquirer on May 27, 1893. To mark the ten-year anniversary of the Alexander III’s coronation, a great Coronation Day program of events was planned for Philadelphia; the flagship Dimitri Donskoi and a second Russian ship, the Rynda, anchored in the Delaware River overlooking the city.

The Russian Minister to the United States, Prince Cantacuzène, held a press preview the day prior to display the Tsar’s gifts, at the Russian Legation in Washington, D.C., before traveling to Philadelphia. He also provided to the media the text of his letter to the gift recipients. This letter of appreciation was reprinted in full on the front page of the May 27th edition of the Inquirer; it is identical to the original letter from Prince Cantacuzène to Dr. Biddle, which accompanies the tankard in this sale.

The May 28, 1893 edition of the Inquirer devoted nearly a full page to the previous day’s ceremonies and celebrations. Both Biddle and Drexel attended the events aboard the Dimitri Donskoi, and were recipients of gifts from the Tsar. The Inquirer memorialized the events: “Prince Cantacuzène made the formal presentation, and he was followed by Admiral Kaznakoff, who spoke of the good feeling the Russians have for the people of the United States. While the band rendered a few bars of “Columbia” the sailors, with hearty good-will, gave three cheers for Philadelphia.” 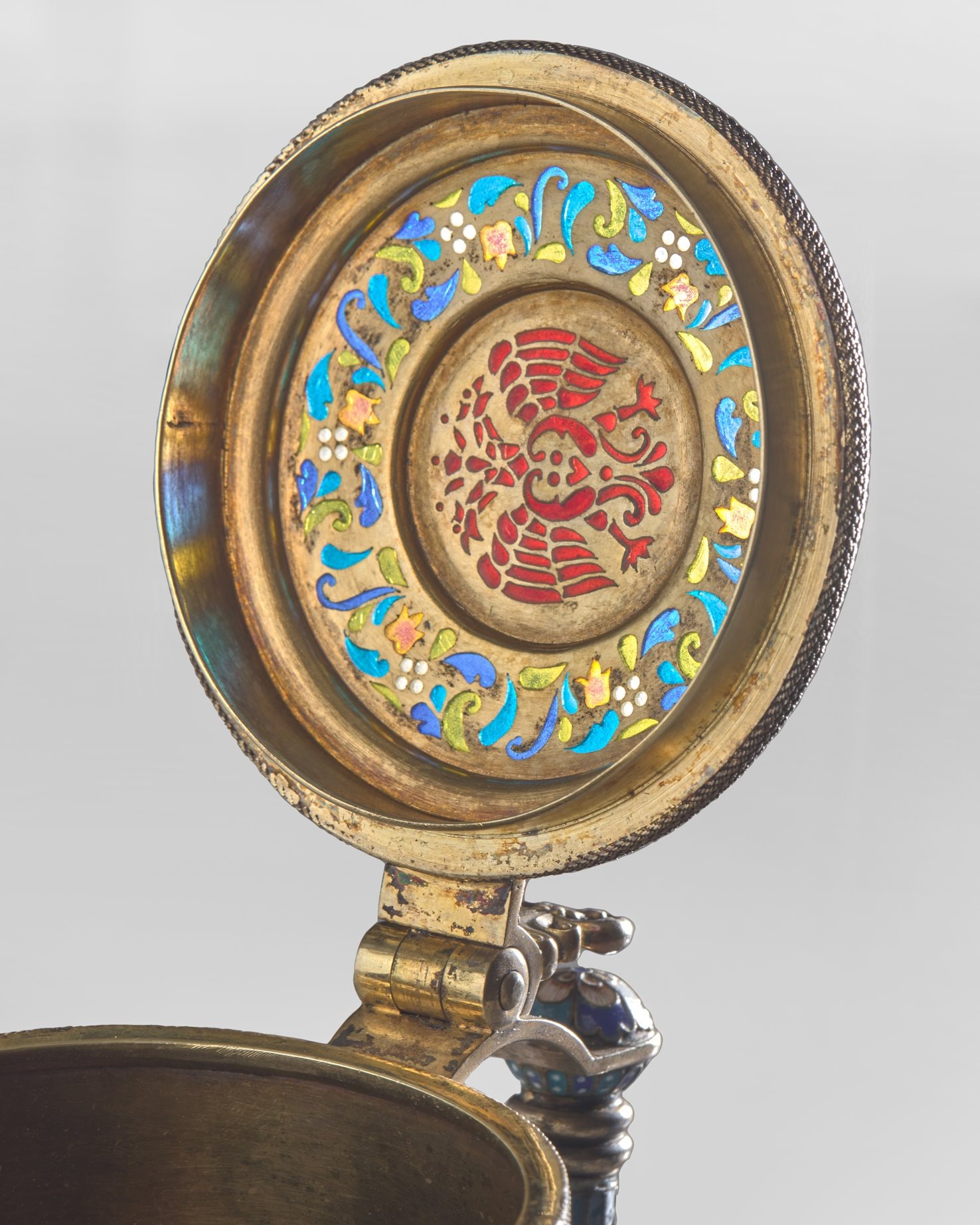 “Each present possesses a distinct individuality and is conceded to be a chef-d’œuvre of the silversmith’s art,” the Inquirer observed, as well as noting that all were made in St. Petersburg — two by Grachev and eight by Ovchinnikov. Dr. Biddle’s tankard is not individually described, but it is noted as “a silver gilt enameled cup, similar to that prepared for Mr. C.M. Reeve” (Charles M. Reeve was a Minneapolis businessman who had been involved in the Midwestern group of relief efforts). Mr. Reeve’s similar gift is described as such: “a tankard, gilt and enamel. The enameling of this tankard, or covered cup, is exquisite. The bottom, perforated, had a bold design of leaves and vine tendrils wrought into the perforations in translucent enamel, with an extremely rich affect.” With the exception of the unique design used on the tankard underside and lid, this description matches Dr. Biddle’s tankard precisely. 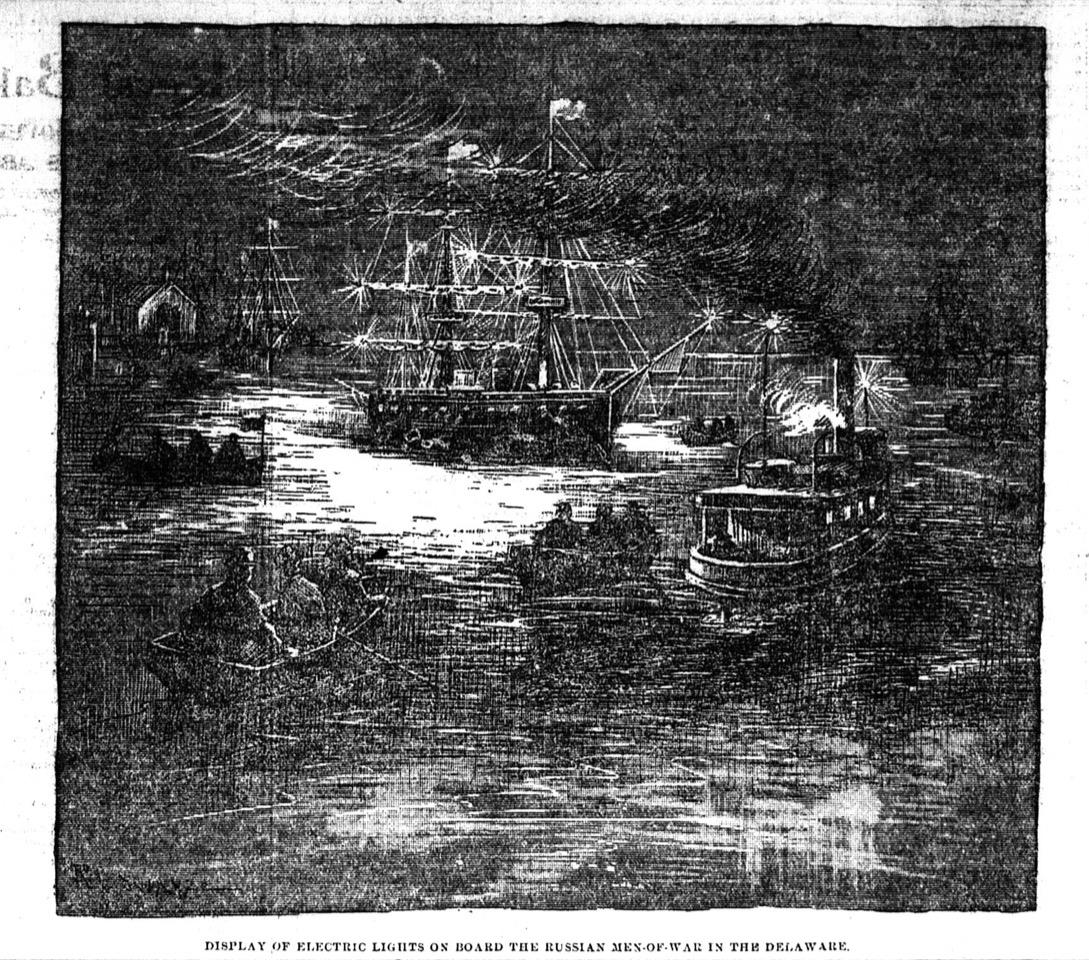 The evening ended with a stunning display on the Delaware River. “Like glittering gems set upon a background of soft black velvet were the two Russian war vessels out upon the bosom of the Delaware last night. Both were brilliantly illuminated from stern to stern with vari-colored electric lamps and fanciful forms of fire and golden showers of fireworks were shot out from time to time.” For Philadelphians, it must have felt like a faint reminder of the Centennial Exposition seventeen years prior, when the whole world descended on the city. Dr. Biddle’s finely crafted tankard, and its accompanying letter from Prince Cantacuzène, are two of the few known artifacts of that glorious day in Philadelphia.

View the rest of our February 24 Gilded Age auction.