Jackson Pollock: Lost and Found | An Article by Helen Harrison, Director of the Pollock-Krasner H...

Freeman's is proud to present Jackson Pollock 's Pennsylvania Landscape, an important example of the artist 's early work. Previously thought to be lost, the painting comes from the distinguished Philadelphia collection of Dr. Henry and Mrs. Fannie Levine, where it has been since 1974.  It is our privilege to bring this exciting discovery to the market for the first time in nearly fifty years this coming May.

This early Pollock gem, a lyrical study of isolated farm buildings set in undulating terrain, depicts an autumn scene near Erwinna, Pennsylvania, where Pollock shared a rented farmhouse with friends in the summer and fall of 1936. The sky's subtle, muted tonality, the cool profile of the Pocono hills, the neat stacks of harvested hay and the browning fields indicate a late-season date; Pollock reportedly stayed at the farmhouse through October. Driving a Model A Ford given to him by his brother, Charles, he roamed the Delaware River valley in search of picturesque subject matter, which he interpreted with free-flowing subjectivity. He was still strongly under the influence of his former teacher and mentor, the Regionalist painter Thomas Hart Benton (1889-1975), with whom he had studied in 1930-1933.

The present work is one of a group of landscapes from the mid to late nineteen thirties, when Pollock was employed by the New York City WPA Federal Art Project, for which he was required to turn in a painting every six to eight weeks. This one, however, was apparently painted for himself, not for the project. The handful of his known WPA landscape oils measure roughly 24 by 30 inches, the standard government-issue canvas-for example, a stylistically-related 1936 painting, descriptively titled Landscape with Tree to Right (JPCR 22, private collection), of a farm near Milford, New Jersey, six miles north of Erwinna. 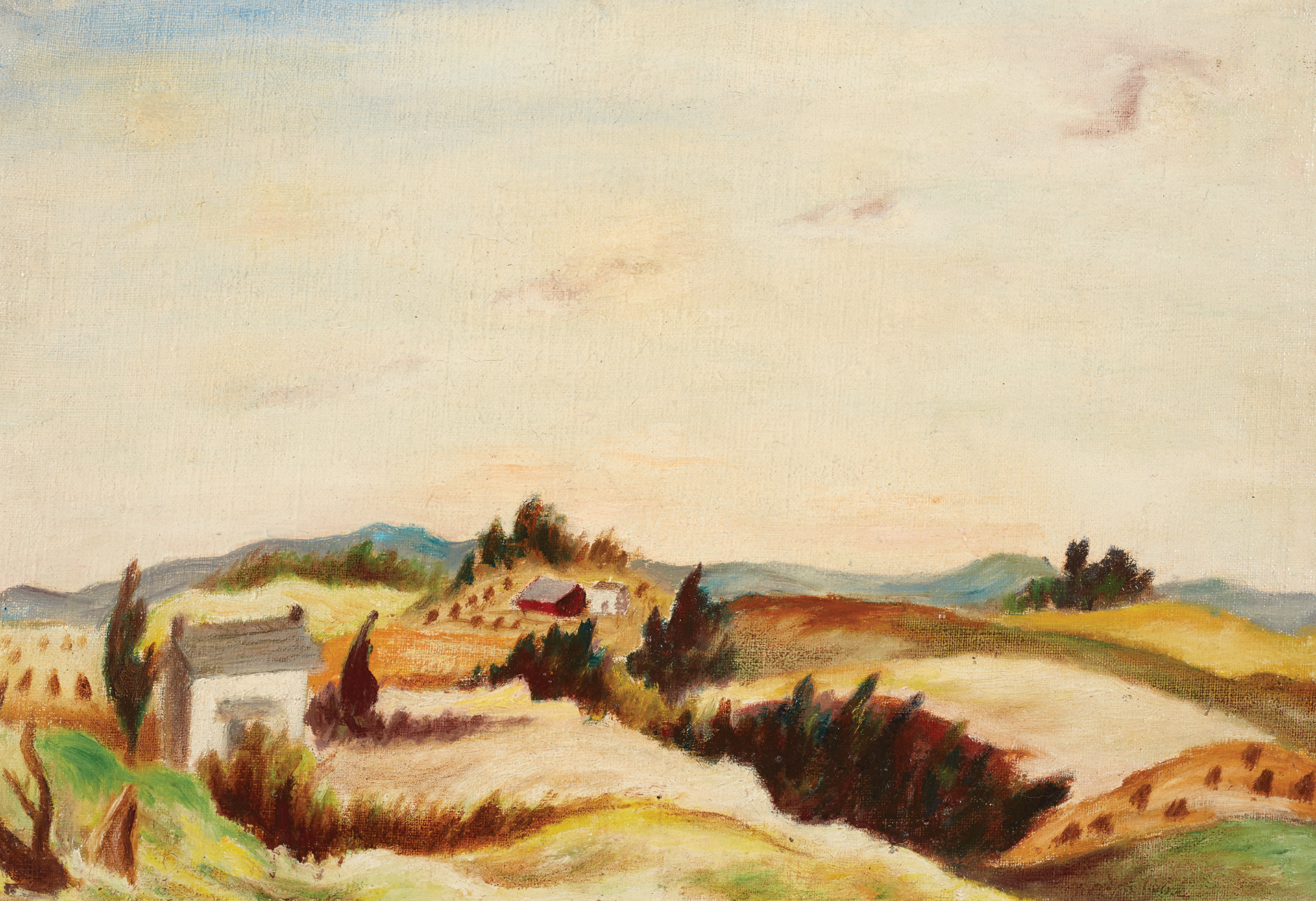 Although the Pollock catalogue raisonné suggests that the present canvas and two others of a similar size were painted in Benton's Kansas City studio while Pollock was visiting at Christmas 1937, Benton's recollections of the visit don't support that conjecture. More likely, Pollock took them with him when he traveled to Kansas City via Greyhound Bus in December for a two-week stay, in the hope that Benton's wife, Rita, could sell them. Rita was a keen promoter of his work, and she and her husband acquired two of the paintings-Red Barn (JPCR 18) and Rolling Hills (JPCR 20)-for themselves. The third canvas was bought by Frank Paxton, the Bentons' next-door neighbor, and eventually made its way to Sotheby Parke Bernet, New York, where it was last sold in May 1974.

A year and a half after the sale, while researching the Pollock catalogue raisonné, Francis V. O'Connor, the co-editor, tried and failed to contact the buyer, whom the auction house could not locate. Therefore, though well documented, including a chain of ownership and a 1961 authentication letter from Benton (mistakenly dated 1966 in the catalogue raisonné entry, a typographical error), the painting was listed as "lost." In fact, like other known works that could not be located, it was merely in an unidentified collection. Now that the painting has been "found," the anomalies are resolved and it regains its rightful place in the Pollock oeuvre.