The Julia Child of Needlework

Dive Into the Life and Work of Erica Wilson

Even if you don’t know her name, you’re likely to know her legacy. Meet Erica Wilson, who introduced cross-stitch, needlework, and crewel techniques to thousands in the latter half of the 20th century.

Freeman’s January 25 auction, The Personal Collection of Vladimir Kagan, features more than 100 lots highlighting the life and work of one of America’s foremost designers—as well as the work of his wife, Erica Wilson, an esteemed needlepoint designer and lifestyle entrepreneur in her own right.

Wilson made a name for herself as a leading authority on needlepoint and embroidery techniques during her lifetime. A shrewd businesswoman with a deep understanding of her clients, she promoted her national and international presence on her public-television program “Erica,” as well as through lectures, books, columns, and retail stores — a multimedia strategy that led The New York Times to dub Wilson the "Julia Child of needlework.” 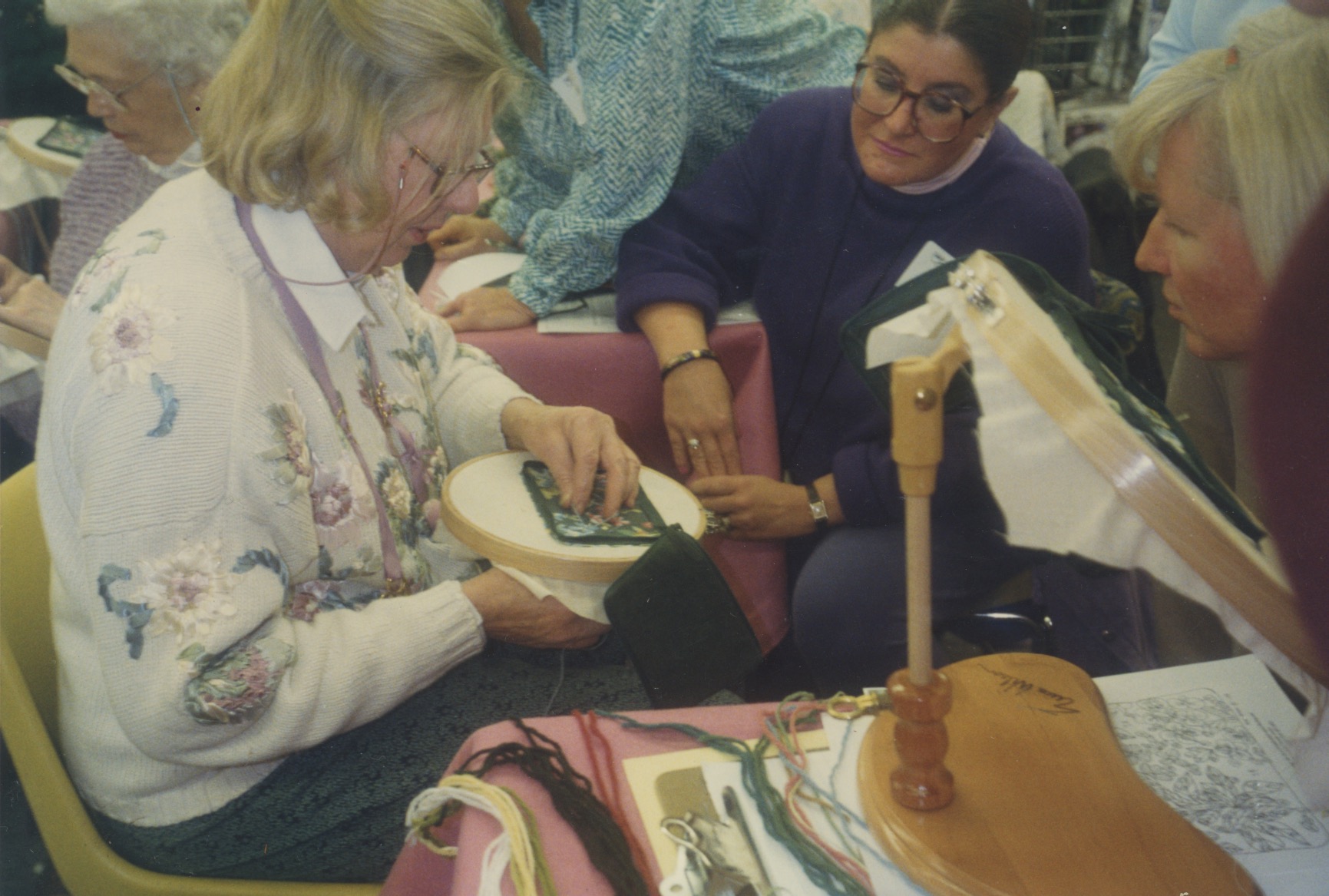 Erica Wilson Demonstrating Needlework Techniques at One of Her Seminars

Born in England in 1928, Wilson moved to New York in 1954 following her training at London’s Royal School of Needlework, and quickly established herself as the country’s most visible and accessible needlework figure. While her bestselling books and television presence found a large and eager audience of mostly women worldwide, her lectures and tours—which combined workshops and sightseeing in Nantucket, Bermuda, Romania, and China, among other destinations — offered well-to-do women in the postwar period curated experiences and thoughtful instruction.

The Personal Collection of Vladimir Kagan not only brings to market the works that populated Wilson and Kagan’s Park Avenue apartment, where they lived for nearly fifty years, it also highlights their complementary careers. A group of original upholstery fabric —cotton, wool, velvet, and linen — underscores the collaborative nature of the couple’s work, with many of the fabrics created by Wilson (Lot 56). 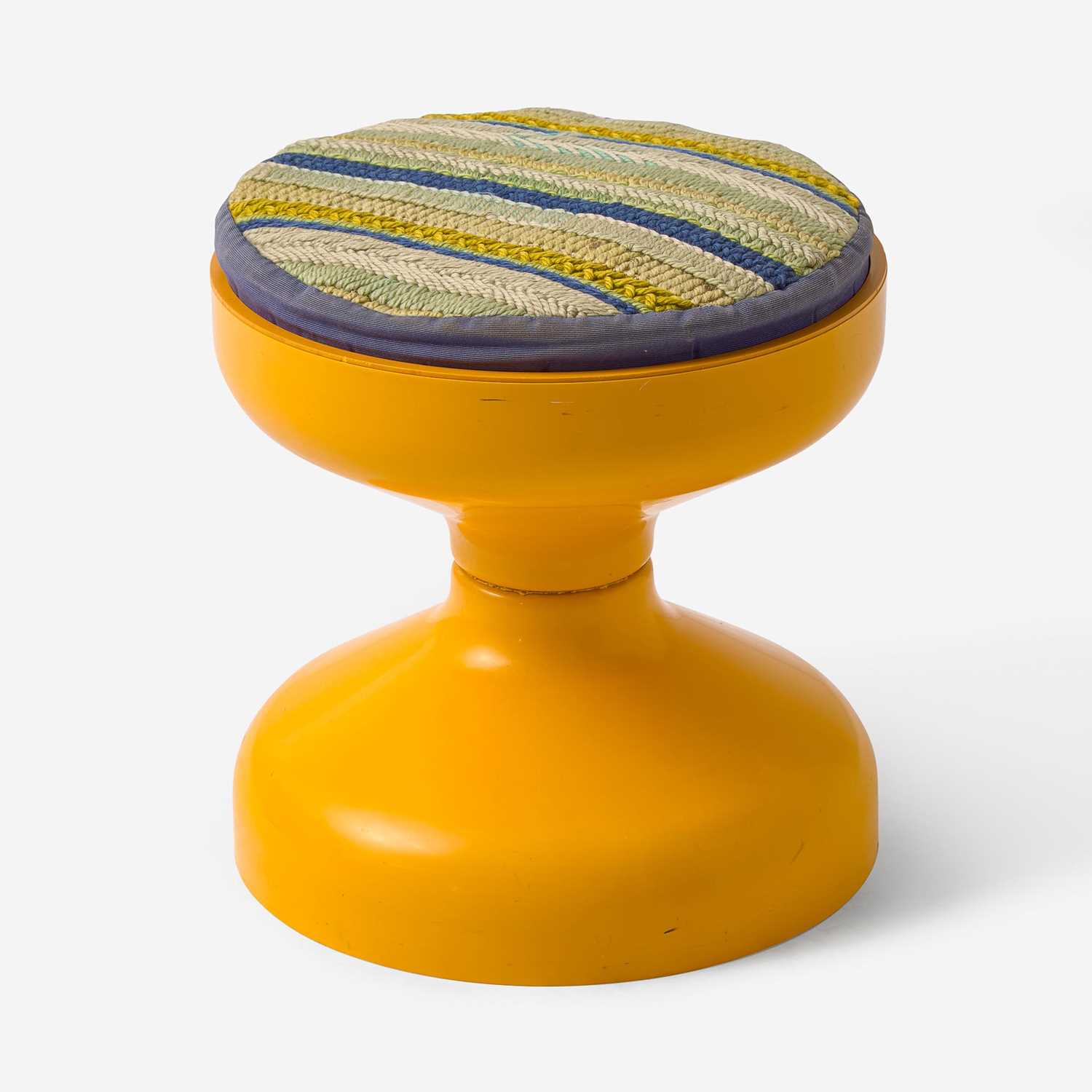 The five other works by Wilson on offer in The Personal Collection of Vladimir Kagan likewise show how Wilson used her masterful embroidery skills to embellish, remix, or otherwise update existing designs. Her patterns both offset and complement the designs they adorn, as in a Wilson embroidered cushion atop a “Rocchetto” Kartell stool (Lot 34). Here, Wilson’s carefully chosen palette rhymes with the bright yellow of the stool, and the intricate embroidery brings a handmade depth to the Castiglioni brothers’ iconic midcentury stool. 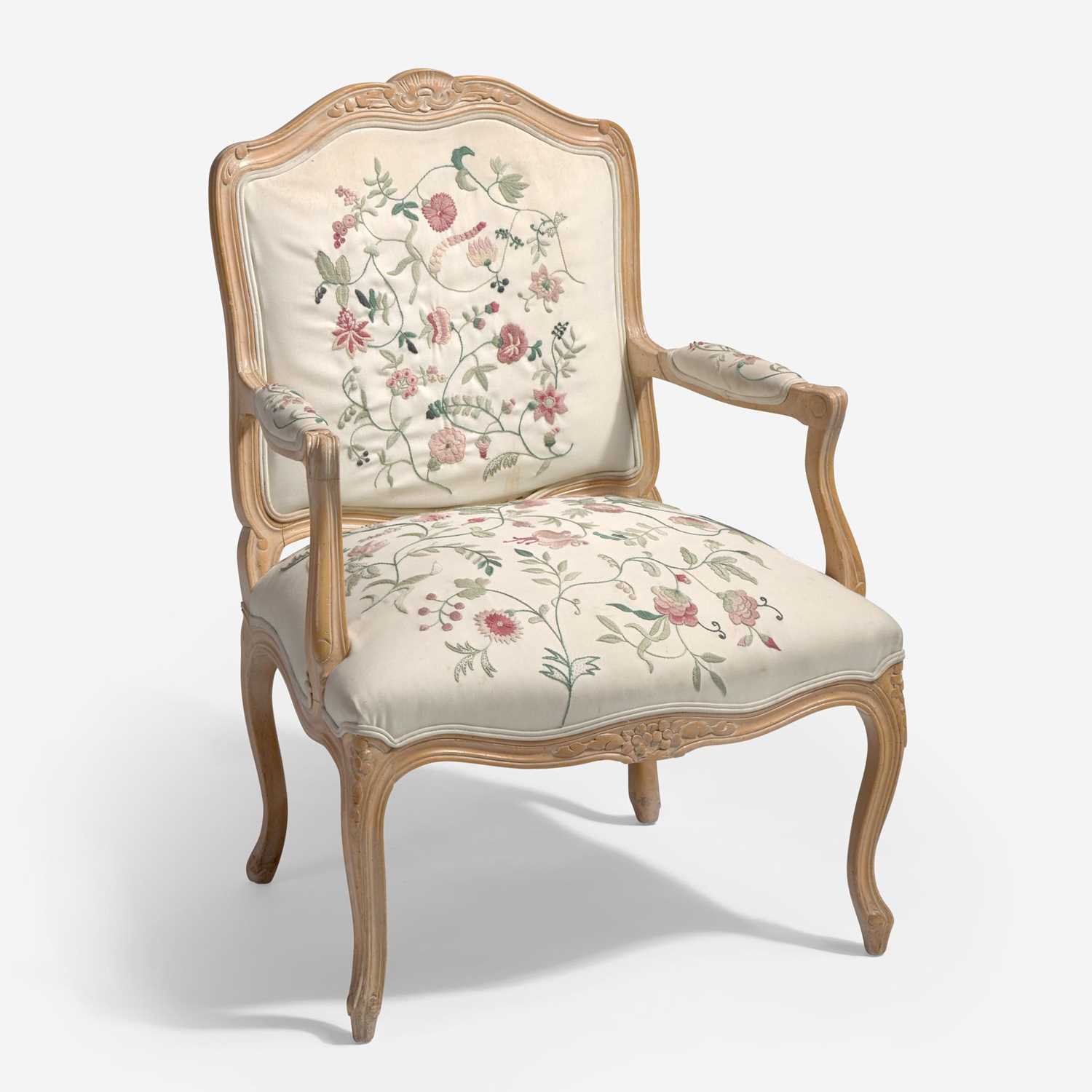 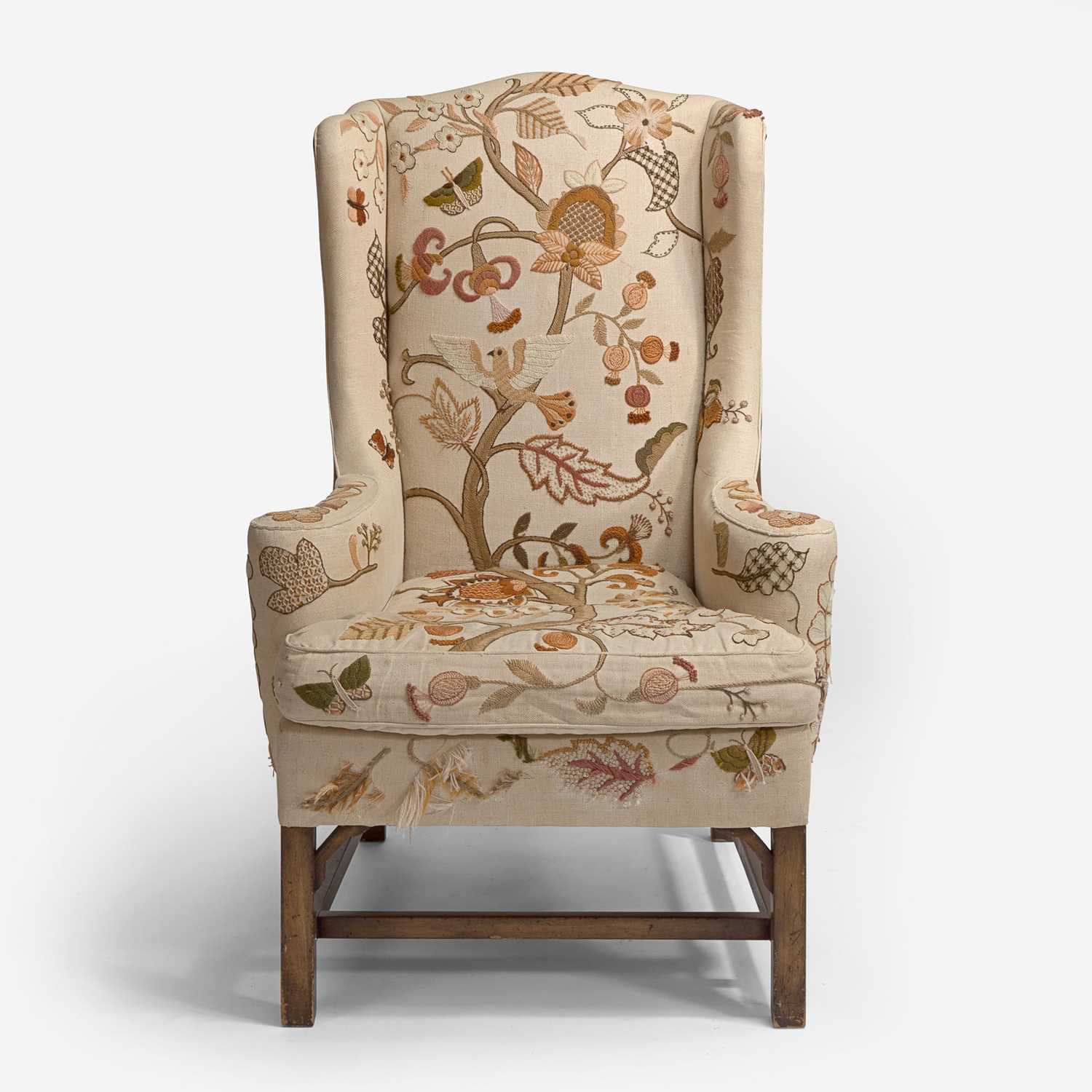 Wilson left behind an archive of more than 3,000 works upon her death in 2011— everything from furniture upholstery to jewelry, clothing, and crewelwork designs that featured all manner of woodland creatures, particularly owls, a favorite of the artist. However, Wilson’s enduring footprint lay not only in the works she herself created, but the ways in which her techniques entered the American home. Her widely distributed and well-loved embroidery kits meant that Wilson’s designs found their way into the domestic spaces of countless households, making her legacy a living one.

Wilson’s daughter, Vanessa Diserio, today oversees Erica Wilson Inc. and remembers her mother’s passion for needlework as an integral part of her own childhood. Says Diserio,

“Not a day goes by that I don’t miss having my mother around, but it fills my heart knowing how happy she was to have me by her side as we worked on her brand together. I started helping her right out of college, and never stopped! Being the owner and operator of Erica Wilson Inc. has given me so many opportunities to meet her fans from far and wide, and nothing is better than listening to customers tell me about their memories of my mother—how they were inspired by her to start their own needlework business, or how they cherish a canvas she designed and have it hung in a place of honor. Some of my earliest childhood memories of Mummy are of her stitching and the sound of her pulling a needle and thread through a taut canvas as she sat surrounded by piles of brightly colored yarn. Even as a little girl, I was always eager to add some stitches of my own to her work, and would take charge of the needle as soon as she put it down for a minute. Nothing gives me more joy than knowing I am carrying on her legacy.” 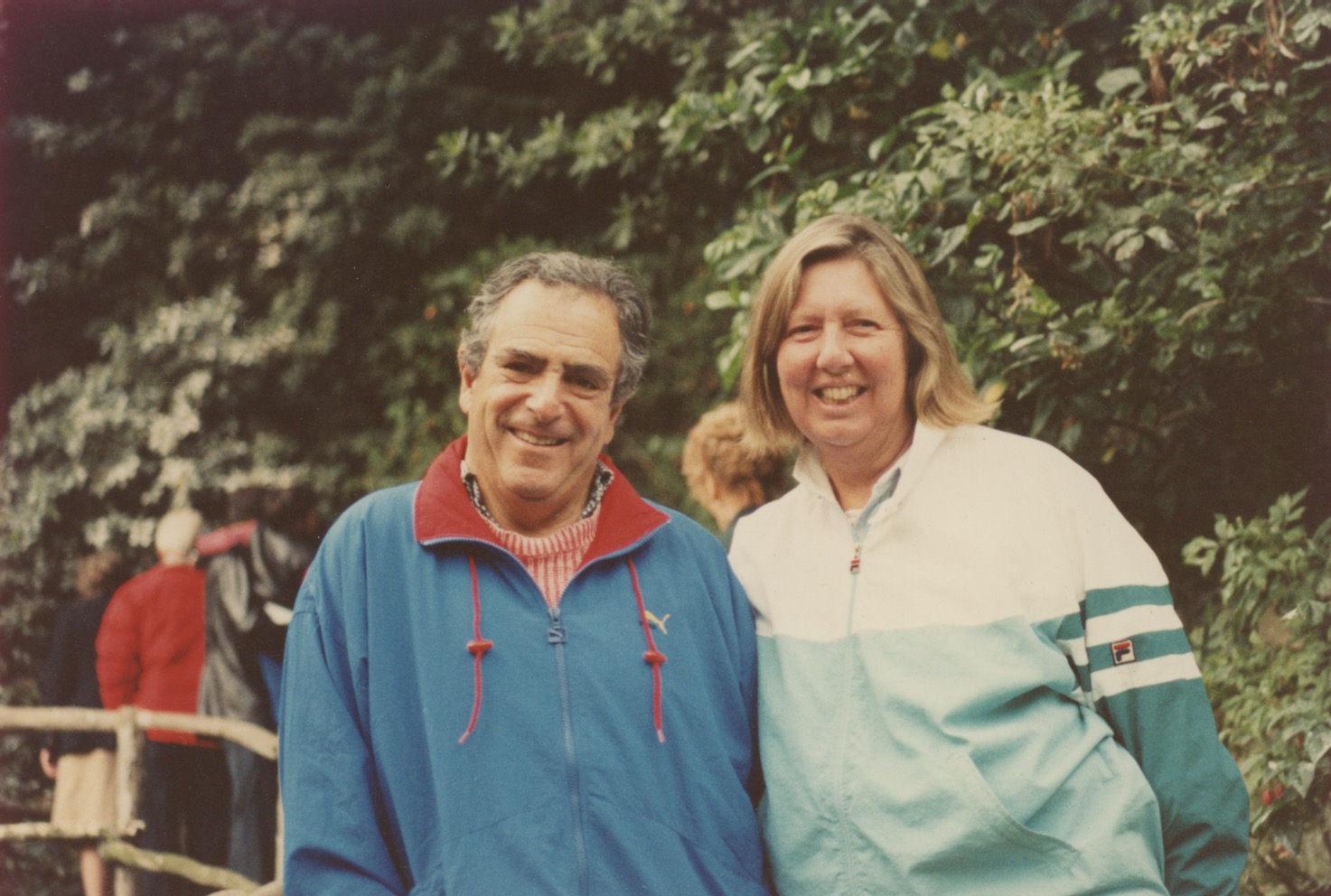