Around the turn of the twentieth century, Engelbert Kayser, the son of a metal merchant, reimagined the expressive potential of an age old and quintessentially vernacular German metal: pewter. The beginning of Kayserzinn 's Jugendstil work shows it to be primarily ornamental, but as the brand developed this style further, it began not only to dictate ornamentation, but form as well, so that the natural world would become the limitations of Kayserzinn 's man made designs

Collaborations with artists such as Carl Geyer, Hugo Leven, and Hermann Fauser would define the development of Kayserzinn's style. The definition of the brand's style would not end with these artists, but permeated their wide and eclectic range of influences. Leven and Fauser's experimental work proves to be an interesting study in form and function, challenging and expanding Art Nouveau's limitations. 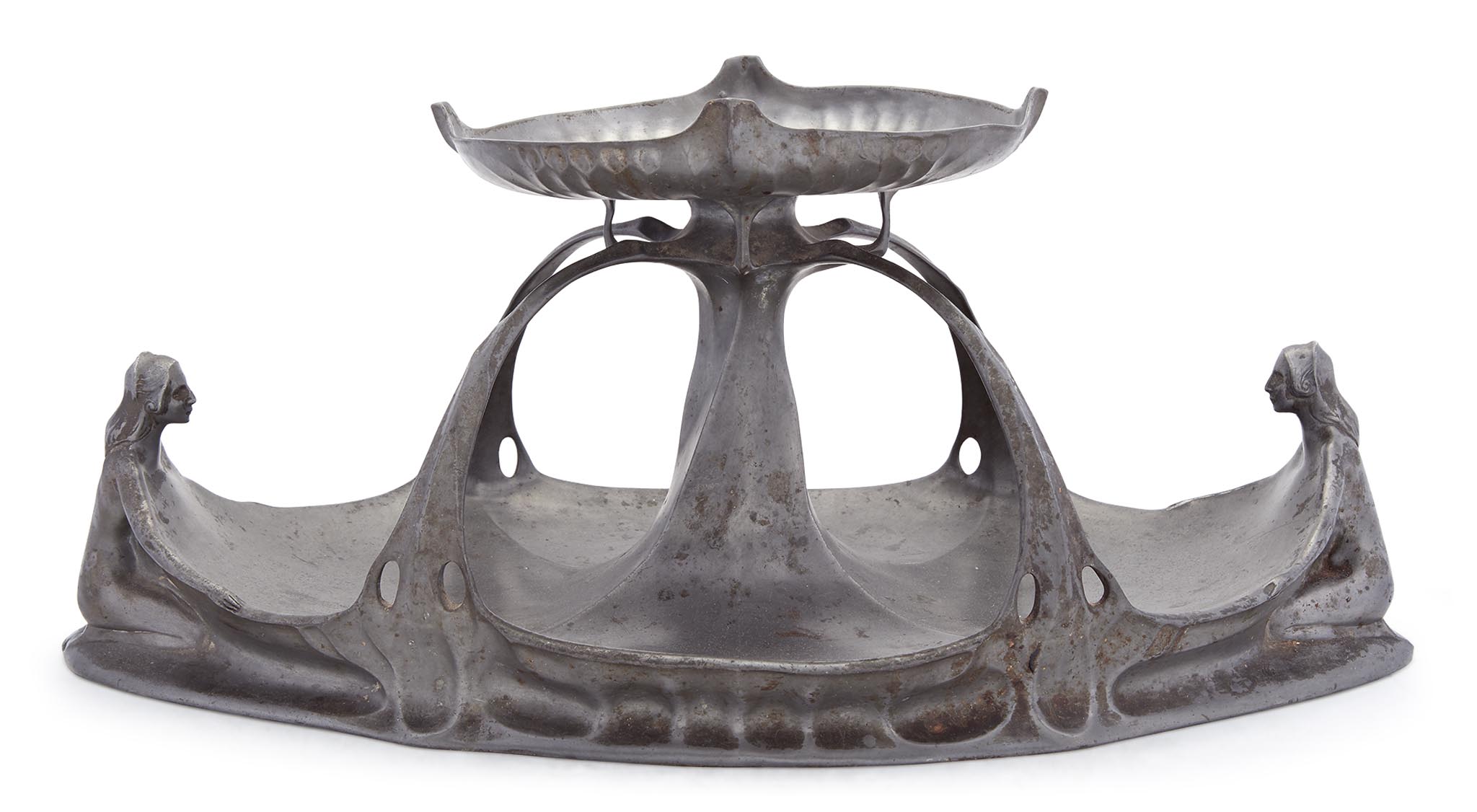 Hugo Leven was, at the age of twenty-one, an early collaborator of Kayserzinn. Beginning from as early as 1895, Leven was instrumental in Kasyerzinn achieving its potential. The artists of Leven's surroundings, such as Tiffany, Daum, and Gallé, influenced his work and can be seen in his designs for Kayserzinn. The opening of Japan in the second half of the nineteenth century, which helped define the Art Nouveau movement, was also a critical influence on Leven's work; aesthetically Japanese florals ornament Kayserzinn's pewter around the turn of the twentieth century. A tray from 1898, overlaid with lily pads and swirls is made to look like a Japanese inspired pond.

With the birth of Kayserzinn pewter, the "Arts and Crafts movement began to bear fruit," as Eckard Wagner and Gerhard Dietrich have asserted in their all-encompassing historicization of the artistic firm. Kayserzinn pewter found a catalyst in the Arts and Crafts movement, marrying the arts with mass production. Kayserzinn's advertisements focused on the functionality, aesthetic superiority, affordability, and quality craftsmanship. An international audience took notice. Kayserzinn was awarded at international fairs and expositions in Paris, Turin, D?sseldorf, and St. Louis.

The Cologne of Kayser's time was undergoing vast changes that came along with the twentieth century's new modernity; these changes are reflected in some of Kayserzinn's motifs, although these representational embraces of modernity are few and far between in the Kayserzinn canon. Developing technologies such as the railway, funicular, and construction crane can be found in relief on a wine cooler from around 1902, reflecting the modernization of Cologne.

The Collection of Rudolf (Rudi) Ammann (1937-2019) represents one of the largest collections of Kayserzinn pewter ever assembled. As a young man, after schooling and military service, Rudi Ammann left his large and long established family in Gstaad Switzerland for travel, eventually settling in Brooklyn, New York. Early on he became lifelong friends with Don Magner, an abstract expressionist painter, then filmmaker who worked in England with Tony Richardson. Beginning in the 1960s, Magner became a seminal dealer and collector of Early Modernist design. Although Rudi and Don were comrades "on the hunt", each collected with a different approach. Don bought widely, from Herter Bros. to Mission Oak and eventually to Memphis, while Rudi collected 'fin de siecle' pewter with focus and scholarly zeal. It was all displayed, throughout his apartment, integrated with a very good collection of minimalist Mission Oak furnishings, a most fitting counterpoint. Rudi's successful career on Wall St. as an export broker of heavy construction equipment, demanded extensive travel; but frequently returning to Brooklyn Heights with a new work to add to the Collection. Rudi also bought regularly from top New York dealers. From October 12, 1989 to January 9, 1990, the Museum of Modern Art staged the first American exhibition recognizing Kayserzinn's contributions to the cannon of Art and Design. Several pieces were lent to that exhibition from Rudi's Collection, and are offered for sale herein.