Learn more about the 20th-century furniture with roots in the assembly line.

Just over a century ago, Henry Ford designed and implemented a moving assembly line for the production of his Ford Model T, an innovation that enabled the mass production of automobiles in the United States. Nowadays, the reach of Ford’s innovation goes far beyond the construction of cars—into the realm of everything from electronics to appliances—to help producers scale up to meet demand.

In Freeman’s December 8 Art and Design auction, the aesthetic of the assembly line and the ethos of mass production are on full display in a number of lots from leading 20th-century furniture makers. The sensibilities of Warren Platner and Charles and Ray Eames brought furniture design into a truly modern moment, marrying the specificity of the artisan with Fordist reproducibility. Mass production as a technological advancement meant that more and more people were able to collect works by these designers without the need to compromise on quality. 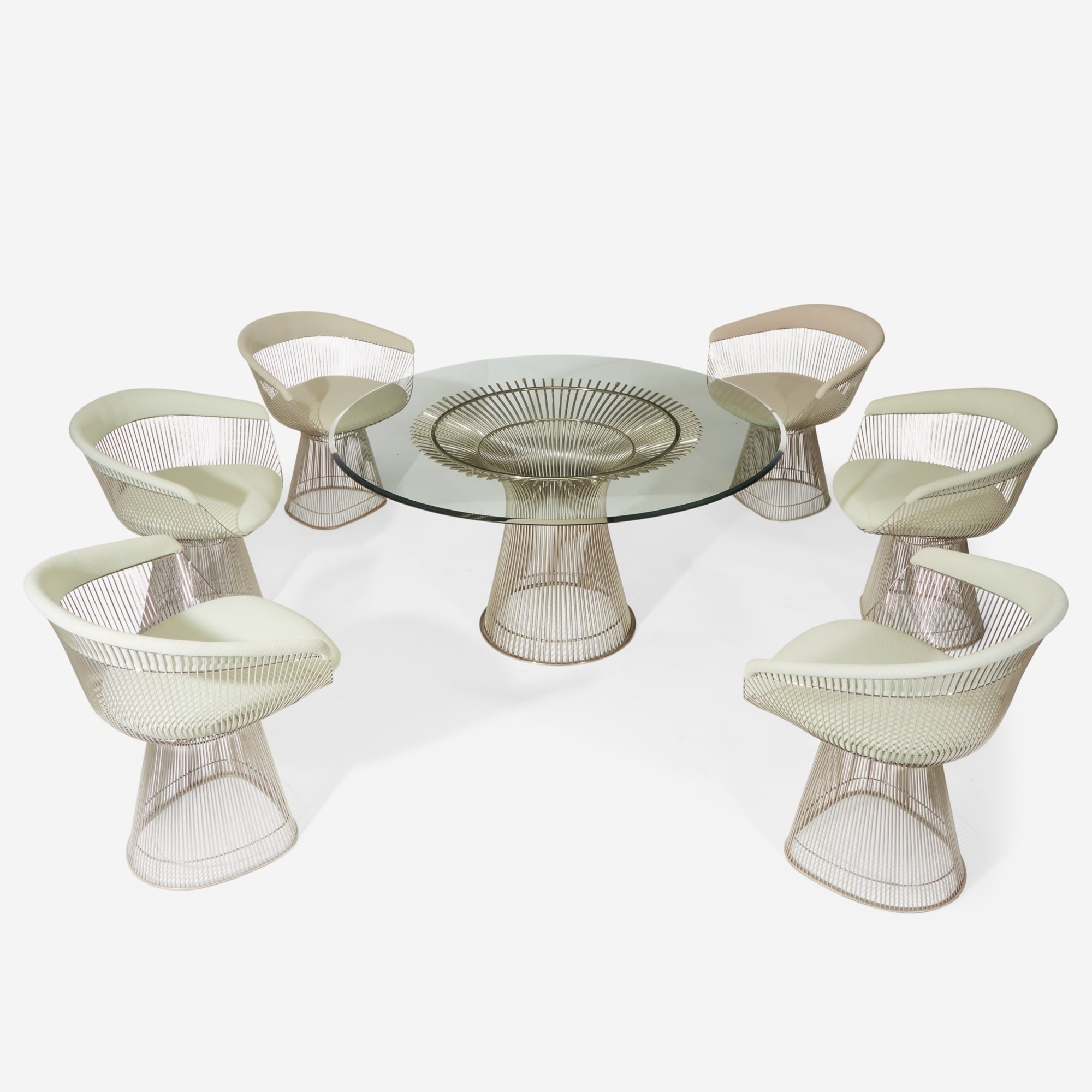 A highlight of Freeman’s upcoming sale, Platner’s dining table and set of six dining chairs, designed in 1966 for Knoll International (Lot 71; estimate: $6,000-8,000) is emblematic of this turning point in furniture design. Platner’s aesthetic was once described by a New York Times critic as “sensuous modernism,” made clear in this set through both the use of material—cold elements like glass, steel, and crisp white upholstery—as well as the undulating curves and round, inviting shapes of both table and chairs. Described by Platner himself as an attempt to join a modernist aesthetic with “the kind of decorative, gentle, graceful kind of design that appeared in period style like Louis XV,” this collection has been in continuous production by Knoll since it debuted in 1966, speaking to the set’s enduring market appeal. 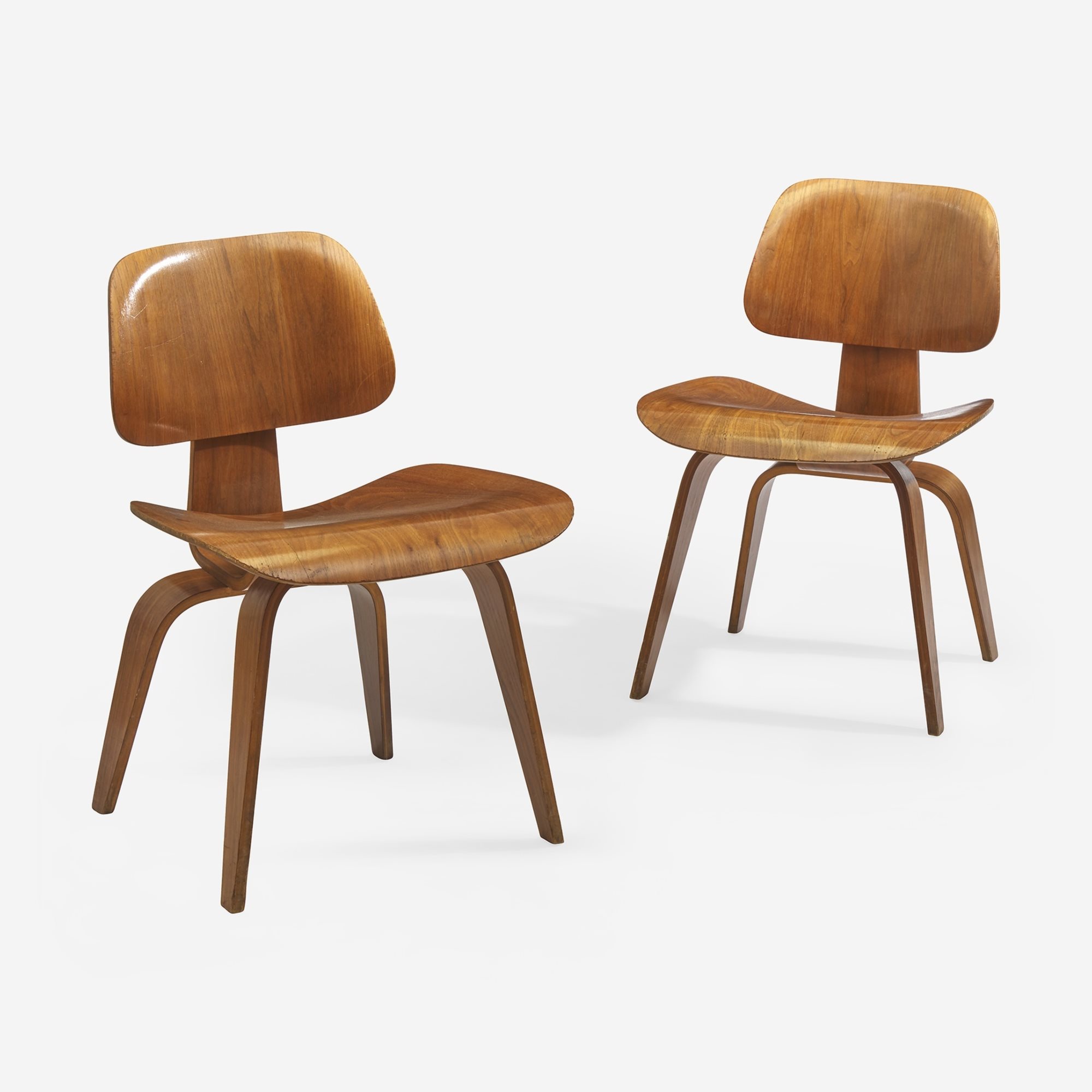 In the course of 20th-century innovations in furniture making and mass production, the husband-and-wife collaborative pair Charles and Ray Eames hold monumental pride of place. The adventurous pair dabbled in everything from art to architecture, but it’s their furniture—including the iconic, timeless Eames lounge chair, in the permanent collection of the Museum of Modern Art and still produced by Herman Miller today—that most influenced the everyday lives of collectors. Art and Design features several works by the Eameses, including a pair of “DCW” laminated walnut lounge chairs designed in 1946 and produced in the 1950s (Lot 73; estimate: $1,000-1,500). Featuring both everyday functionality and an unexpected, curved design, the set is classically Eames. 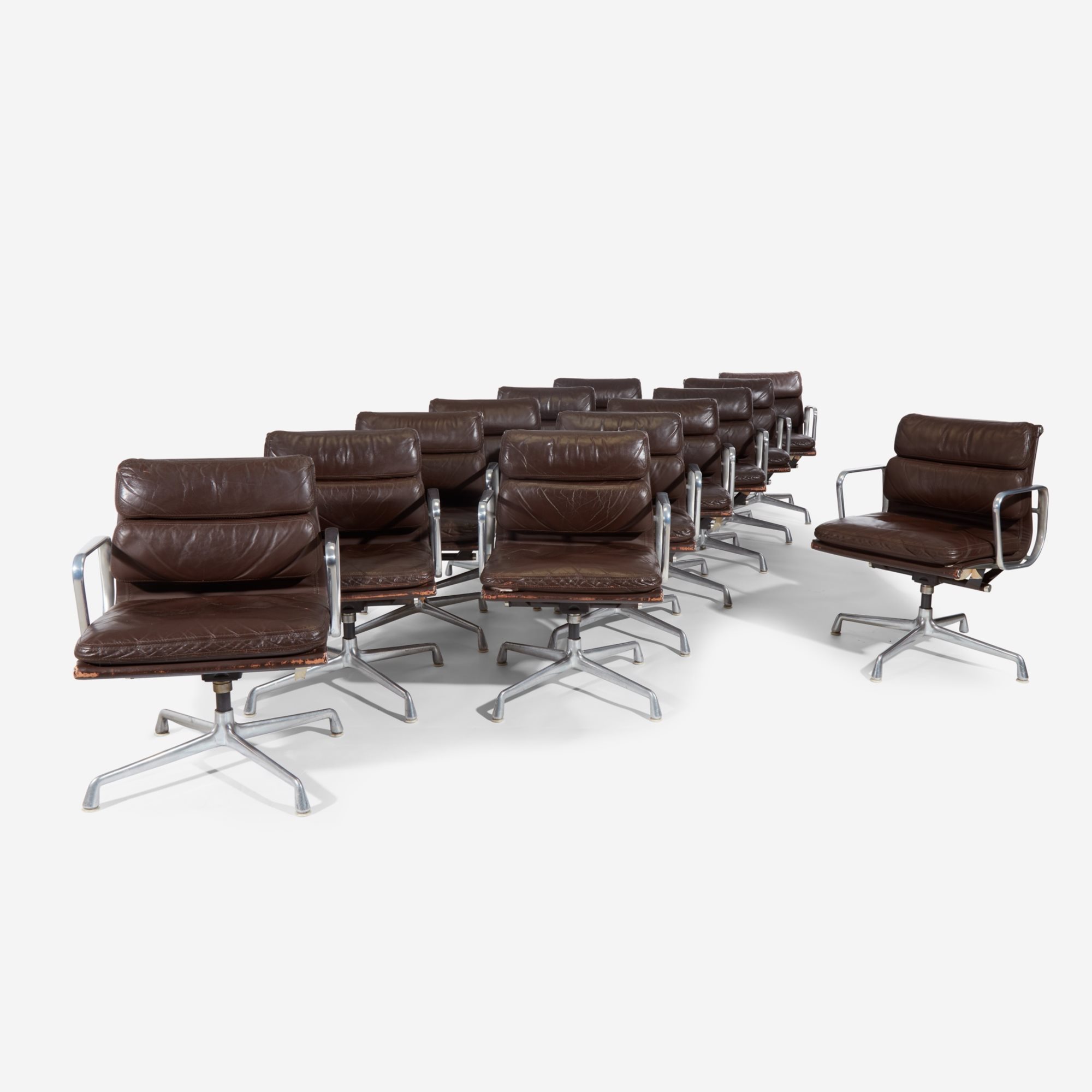 A set of thirteen “Soft Pad Group” swivel armchairs—designed in 1969 and produced in 1984—were acquired directly from Herman Miller by a Washington, D.C. corporate collection (Lot 75; estimate: $3,000-5,000). The set, which combines the hard and soft elements of cast aluminum and soft, worn leather, practically tells the story of 20th-century American corporate culture and office aesthetics. The grouping underscores the principles of mass production, from the chair’s sleek, dynamic silhouette to the set’s utter consistency and reproducibility, befitting an office environment. The Eameses’ “Soft Pad Group” chairs also marked an innovative turn in the design of office chairs; up until their creation in 1969, available models featured hard pads. This timeless model reveals the designers’ commitment not only to functionality and appearance, but to comfort as well.