Our April 3 online Design auction features important and influential works from an international group of 20th century designers working in various media. Learn more about the highlights of our forthcoming auction and why these pieces demonstrate their artist 's mastery of their chosen craft. 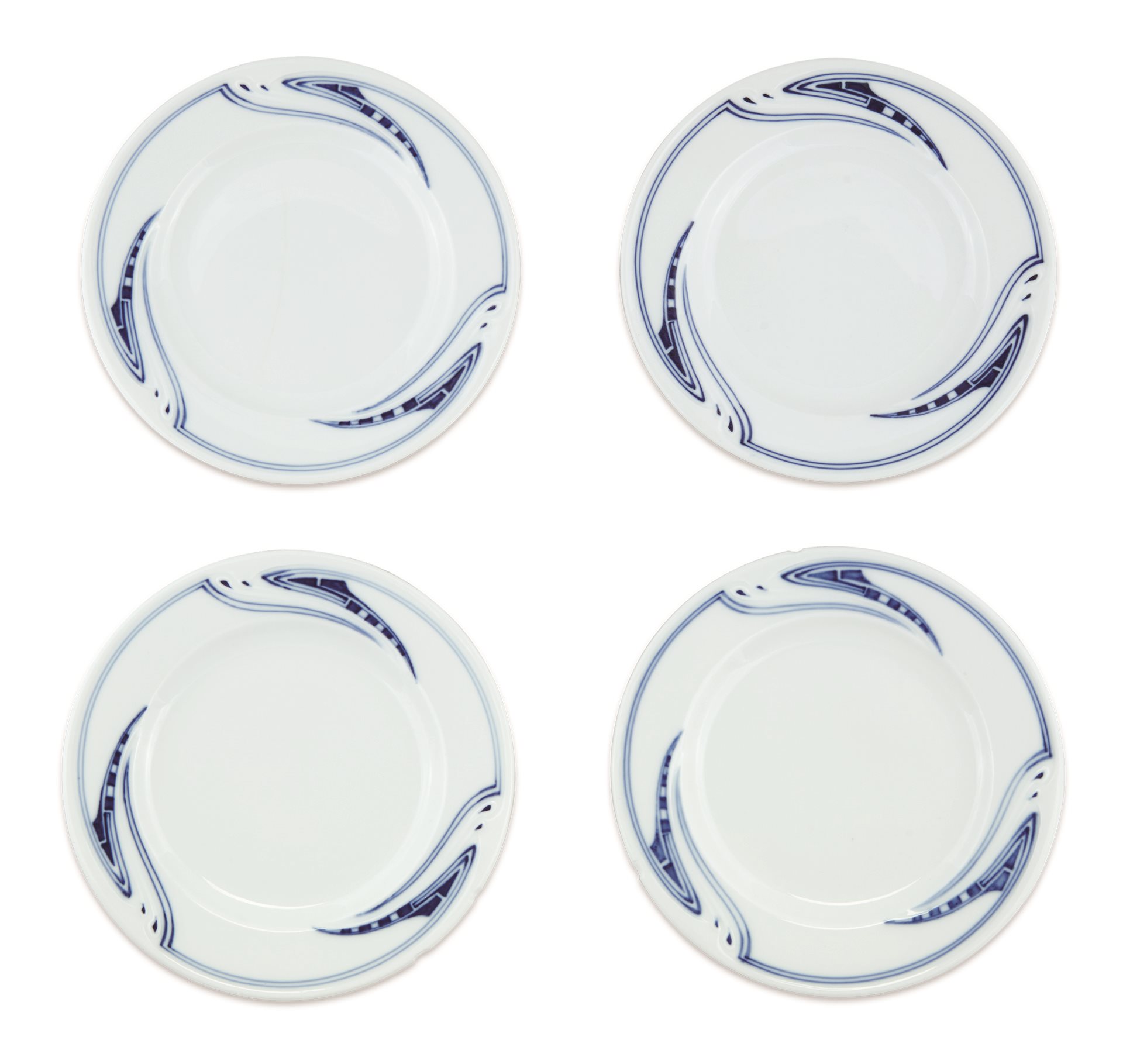 Belgian-born Henry van de Velde (1863-1957) was among the most influential artists, designers and architects who defined the Art Nouveau style in the early years of the 20th century. Van de Velde called for a unification of the Applied and Fine Arts, marked by a new style that eschewed Historicism and embraced innovative and thoughtful design. He worked with industry to create original designs that held true to these principles. A superb porcelain service for the celebrated Meissen manufactory, designed circa 1903-1904, was among his most successful. Known as Peitschenhieb or "Whiplash", the service took two years for the Meissen firm to complete. While the design was not widely heralded at its time of production, it has since been reappraised as a masterwork of Art Nouveau and works from the service can be found in public collections including the British Museum, The Minneapolis Institute of Art, The Philadelphia Museum of Art, The Carnegie Museum of Art, The Detroit Institute of Arts, and numerous European collections. 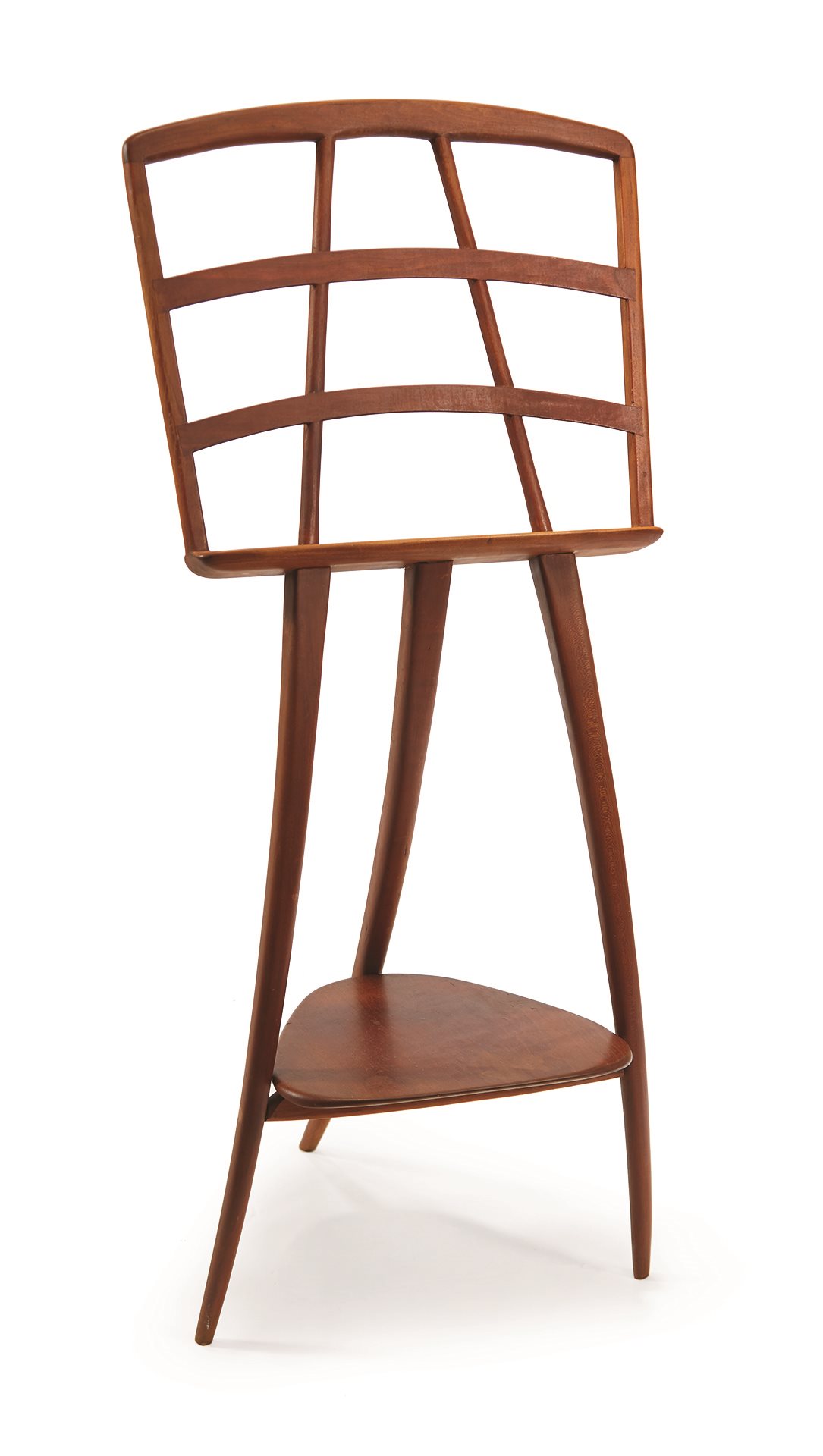 Wharton Esherick (1887-1970), heralded as the "Dean of American Craftsmen" and a vanguard of America's Studio Furniture Movement, began working in wood at the close of the Arts & Crafts Movement. Although embracing the ideology that valued the hand-made over the industrially produced, he broke with the movement's more traditional edicts and aesthetics, creating sculptural, cutting-edge furniture forms. Although the craftsman rarely made multiples of the same design, this iconic music stand is one of an edition of 24, based on an original model Esherick made in 1960. Another example is in the collection of the Metropolitan Museum of Art. 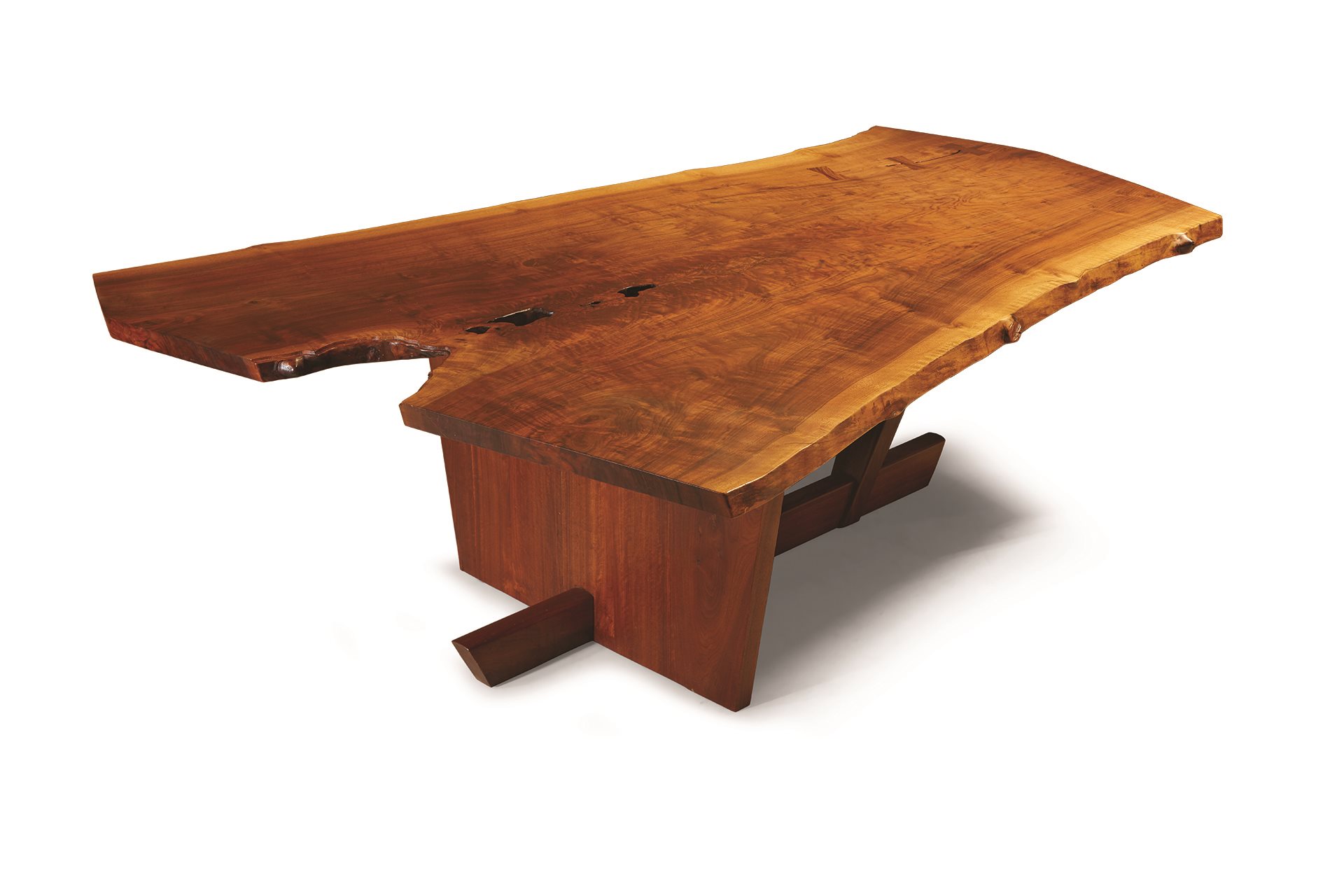 In 1984, renowned Pennsylvania woodworker George Nakashima (1905-1990) was approached by D.C. architect, David A. Holtz, to create a dining table to serve as a truly spectacular piece of art in Mr. Holtz's Potomac, Maryland home. For the project, Nakashima selected a "very fine slab of Claro walnut," thick and heavily figured. To support the large, triangular piece of Claro walnut, Nakashima turned to his "Minguren"-type base, named after the association of designer-craftsmen in Japan. Correspondence with David Holtz and a series of sketches completed through the winter of 1985, reveal modifications in the design of the table top, most notably three prominent rosewood butterfly keys, opened knots, bark pockets and a unique, fitted and removable Claro walnut panel to fit within the natural recess of the tree's major dividing branches, thus expanding the table's seating area. This extraordinary table was unlike any Nakashima had completed up to that date, save his Peace Altar completed that same year. As a result, Nakashima named all future tables of the same design "Holtz" for the original table's owner. George Nakashima Woodworker estimates no more than six such tables have ever been created. The present lot was the first. 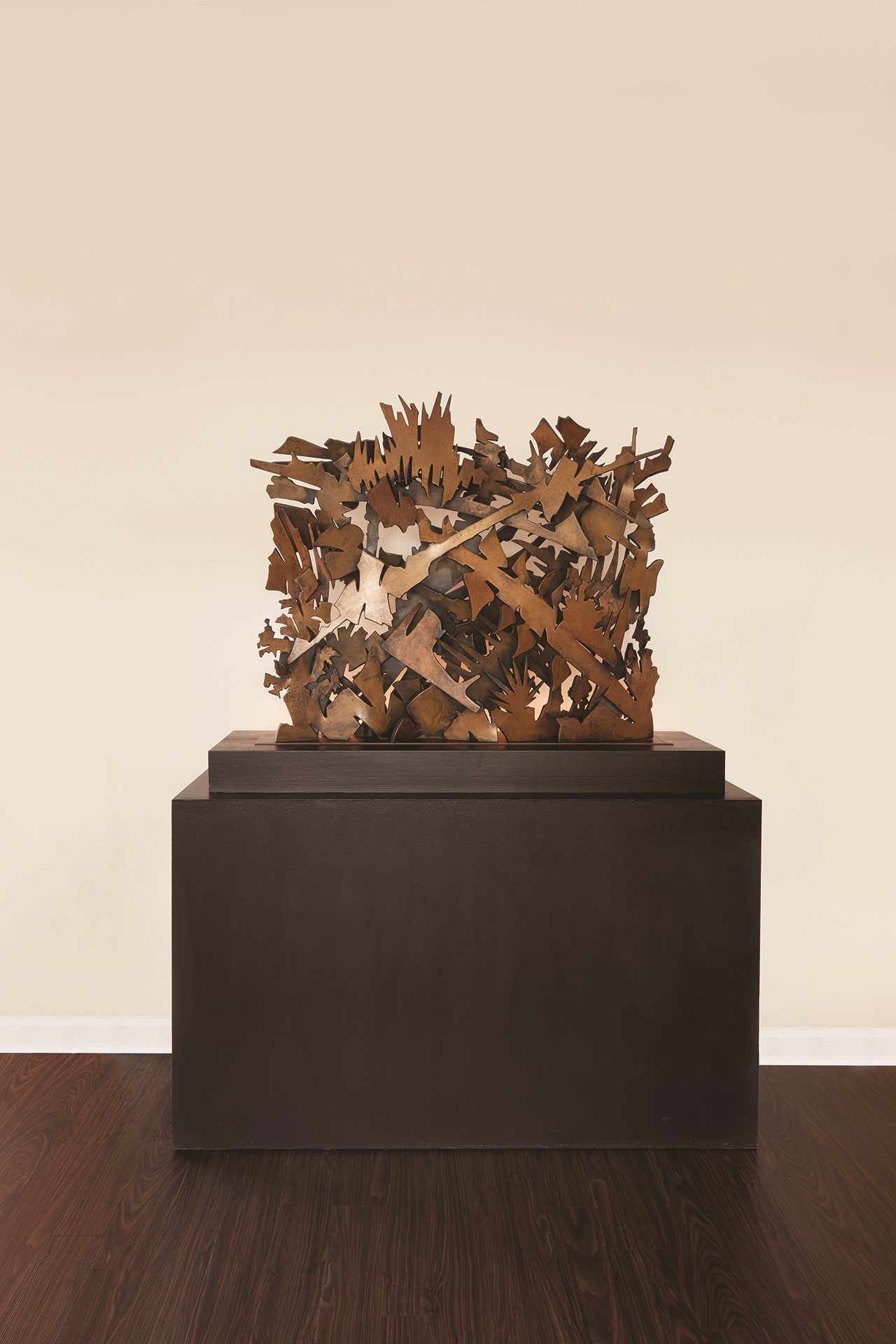 American sculptor Albert Paley (b. 1944) is one of the world's foremost metal sculptors. Paley is an expert at taking metal and making it feel like flowing drapery, bending and manipulating it like fabric, or pulled taffy. This large sculpture exemplifies how his combination of art, craft, technique, and design all meld together to create pieces that are unique and powerful. It is inviting and yet curious, visually striking and yet approachable. 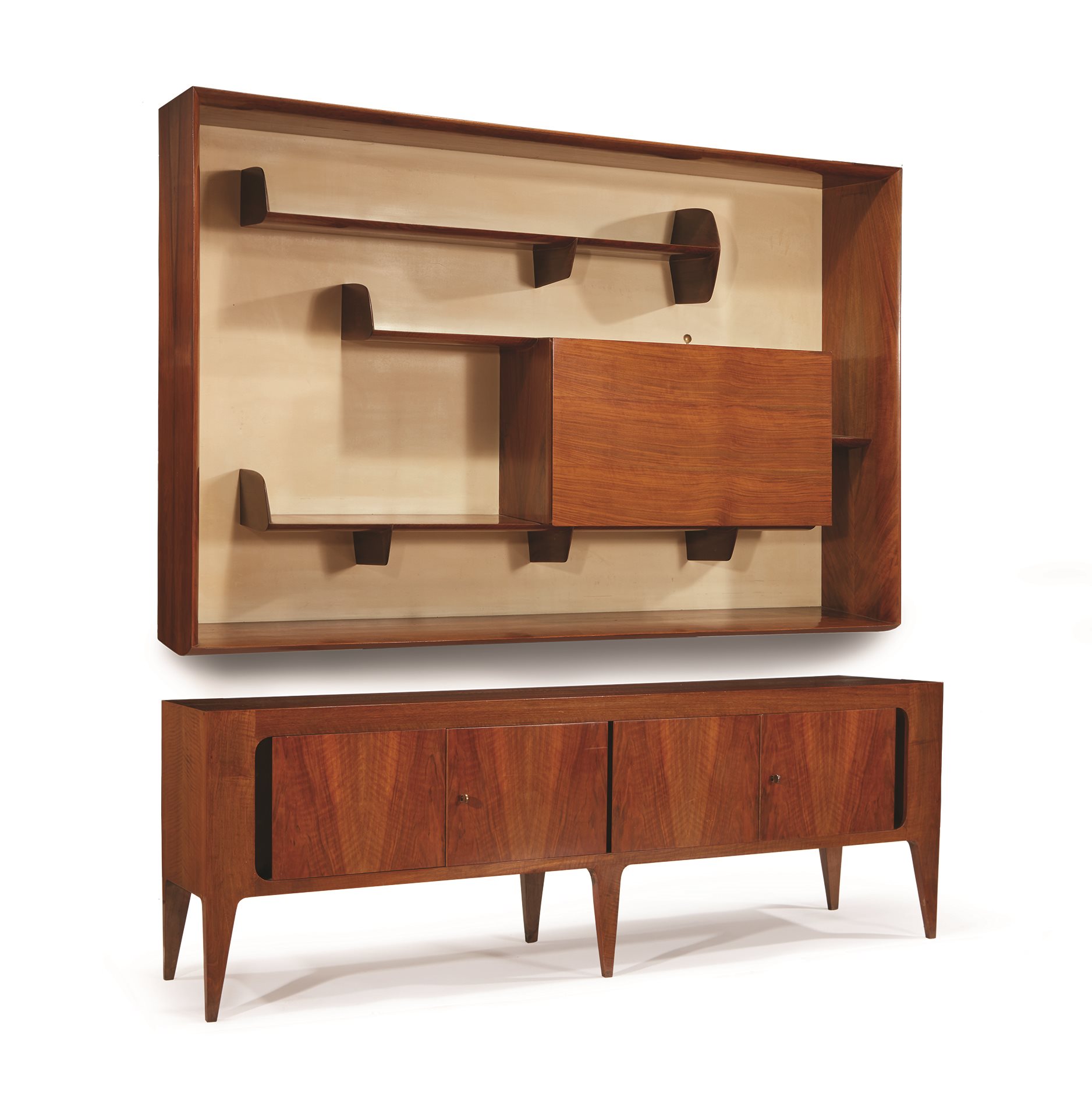 Gio Ponti (1891-1979) was among the most prolific and influential architect-designers of the interwar period, helping to define the Novecento movement in Italy which championed a return to classical art, design and architecture. In 1928 Ponti founded Domus, an authoritative and sweeping review of developments in architecture and design around the globe. In addition to architecture, Gio Ponti, designed decorative objects with industry-leading firms like Richard Ginori (porcelain), Christofle (silverware), Venini (glass), and furniture with the firms of Cassina, Altamira, and Singer & Sons. Designed circa 1951, this wall-mounted bookcase and sideboard cabinet were among his modern designs for Singer & Sons.