This MLK Comic Book Galvanized a Generation of Activists

Dive into the work that inspired John Lewis and many others

Published in 1957, Martin Luther King and the Montgomery Story made an undeniable impact. Now, a scarce copy of the comic is on offer at Freeman's September 21.

From the Marvel Comics Captain America series to Alan Moore and David Lloyd’s V for Vendetta—the graphic novel that was later adapted into the popular 2005 film—comic books have a rich history as not just entertainment or art, but political texts. How often, though, can a graphic novel claim to be the inspiration for one of the greatest civil rights activists of our time? Such is true of Martin Luther King and the Montgomery Story, which lit a political flame for the late Georgia Congressman John Lewis.

In 1957, when Martin Luther King and the Montgomery Story was first published, Lewis was a teenager in Alabama who was already keenly aware of the Jim Crow racism and segregationist policies of the time. It was the same year Lewis first met Rosa Parks, and a year before he would meet Dr. Martin Luther King, Jr. himself. The 10-cent comic—published by the Fellowship of Reconciliation, a nonviolent interfaith organization—found its way into the hands of young activists, Lewis among them. 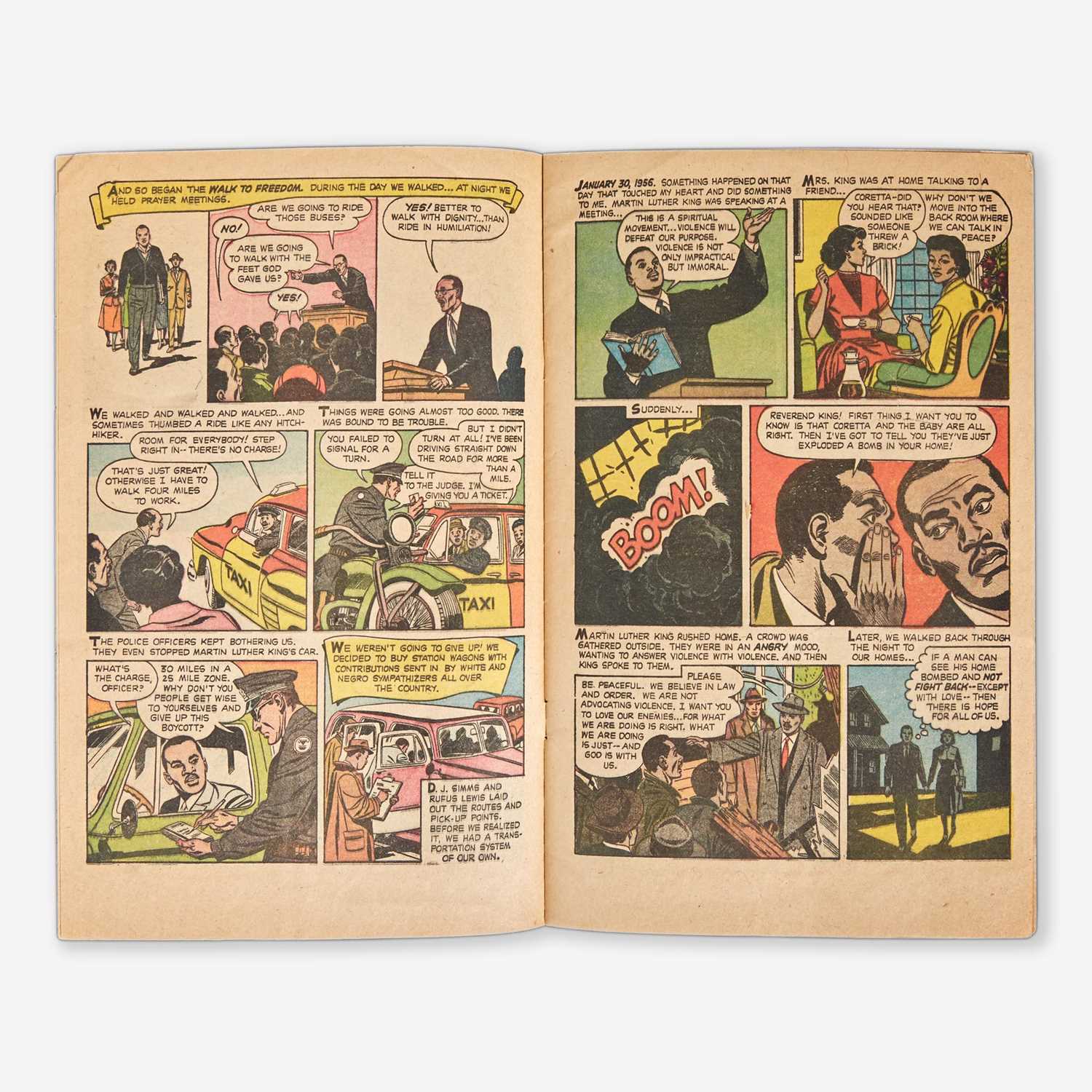 Lewis later credited the book with “setting me on the path I’m on today”—no inconsequential feat for a figure whose legacy includes being one of the 13 original Freedom Riders in 1961, a speaker at the 1963 March on Washington, and a champion of civil rights and racial justice during his more than three decades in Congress. Martin Luther King and the Montgomery Story clearly made a significant impact—but what story, exactly, did the comic tell?

The comic—co-written by Alfred Hassler and Benton Resnik, and illustrated by Sy Barry—first maps the trajectory of the 1950s Montgomery bus boycott, in which activists refused to use the city’s public transportation until it was desegregated. The story is narrated by a man named Jones; “My name doesn’t matter,” says the narrator, “but my story’s important for you as well as me. We’re all caught up in it in one way or another!” This call-to-action tone reflected the ethos of the Civil Rights Movement generally, in which solidarity cut across lines of race, class, and gender. 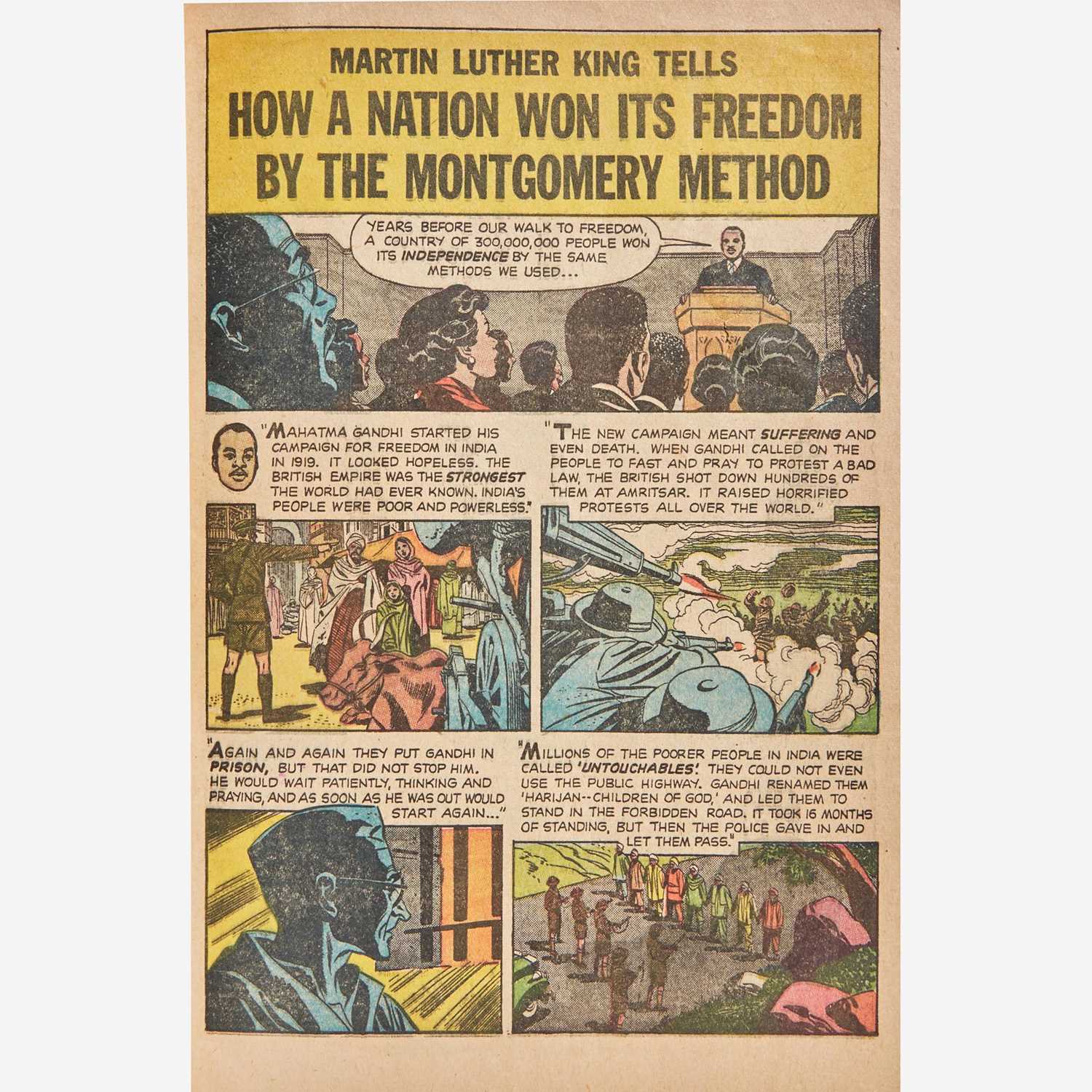 After describing the successful bus boycott, the book describes the “Montgomery Method” and how it might be applied to other struggles for justice beyond its original context. “In Montgomery we used this nonviolent Christian action to get Jim Crow off the buses,” we read. “It can be used anywhere, though, against any kind of evil.” Underscoring nonviolence above all else, and the Christian principle of loving one’s enemy that Dr. King preached, Martin Luther King and the Montgomery Story implores its reader to take action against evil; as a result, “sometimes you’ll be surprised to find friends among those you thought were enemies.”

Martin Luther King and the Montgomery Story, as it turns out, inspired not only John Lewis’s activist and political career, but his publishing path as well. When Lewis went to pen an autobiography chronicling his involvement in the Civil Rights Movement, he recalled the early influence the 1957 comic had on his development, and opted to make his autobiography a graphic novel. The resulting trilogy, March, was published between 2013 and 2016 to critical acclaim.

Freeman’s September 21 Books and Manuscripts auction features a scarce copy of Martin Luther King and the Montgomery Story signed by both Dr. King and Coretta Scott King, who features prominently in the comic itself (Lot 2). Presented at an estimate of $7,000-10,000, the comic’s message of nonviolent resistance in the fight for racial justice is as applicable today as it was in the 1950s. The book presents a rare opportunity to collect a work of political art that inspired an entire generation of activists and continues to resonate in the present moment.

View the rest of our September 21 Books and Manuscripts auction.