An offering of 151 paintings, works on paper, and sculpture from some of the market 's biggest names.

On Tuesday November 13, Freeman's held its autumn Modern & Contemporary Art auction, which offered collectors 151 paintings, works on paper, and sculpture from some of the market's biggest names. The sale totaled $1.9 million and enjoyed a 106% sold by value.

A surprise highlight of the sale were four paintings by French/Vietnamese artist Le Pho (1907-2001). Best known for his poetic depictions of domestic scenes, elegant women and lusciously painted flora, Le Pho shares with his viewers glimpses from his memories of his upbringing in Hanoi in the early 1900s. Lot 61, "Sur la Terrasse," an oil on canvas executed in 1964, soared past its presale estimate of $30,000-50,000, eventually selling for $175,000 after an extended round of bidding with participants on the phone, online, and in the room. The next lot, "Les Pavots et Les Tokyos," another oil on canvas, sold for $106,250, more than three times its high presale estimate of $20,000-30,000. All four works by the artist sold above their estimates in rapid succession.

Works by Pop Artist Andy Warhol also performed well at the auction. A book of 18 hand-colored offset lithrographs by Warhol, Lot 69, entitled "25 Cats Name[d] Sam and One Blue Pussy," sold for $81,250. Lot 80, a screenprint of the actress-turned-princess Grace Kelly, created for the Institute of Contemporary Art, sold for $112,500, surpassing its high estimate. A Philadelphia native, Kelly became part of the Monegasque monarchy in 1956, with her marriage to Prince Rainier III. She died in 1982, and Warhol created the image just two years later, as part of a fundraiser for the museum at the University of Pennsylvania. Lot 79, "$ (9)," a unique variation from the edition of 35 featuring nine of the brightly colored currency symbols, sold for $106,250.

An assortment of sculptures by Harry Bertoia, the visionary sculptor and creative mind behind some of the most iconic and sought-after sculptures in today's market, also featured prominently in the sale. Bush forms and Sonambient sculptures represent two enduring and important themes in Bertoia's sculptural works. He was heavily influenced by nature and organic patterns and created many "bush-like" pieces throughout his career. Lot 52, for example, sold for $68,750. Bertoia's Sonambient sculptures are comprised of multiple metal rods that, when swayed, collide with one another to emanate ringing notes. Lot 51, an excellent example of the form, comprised of Beryllium copper rods with bronze cattails silvered to brass base and executed in 1968, sold for $40,625. 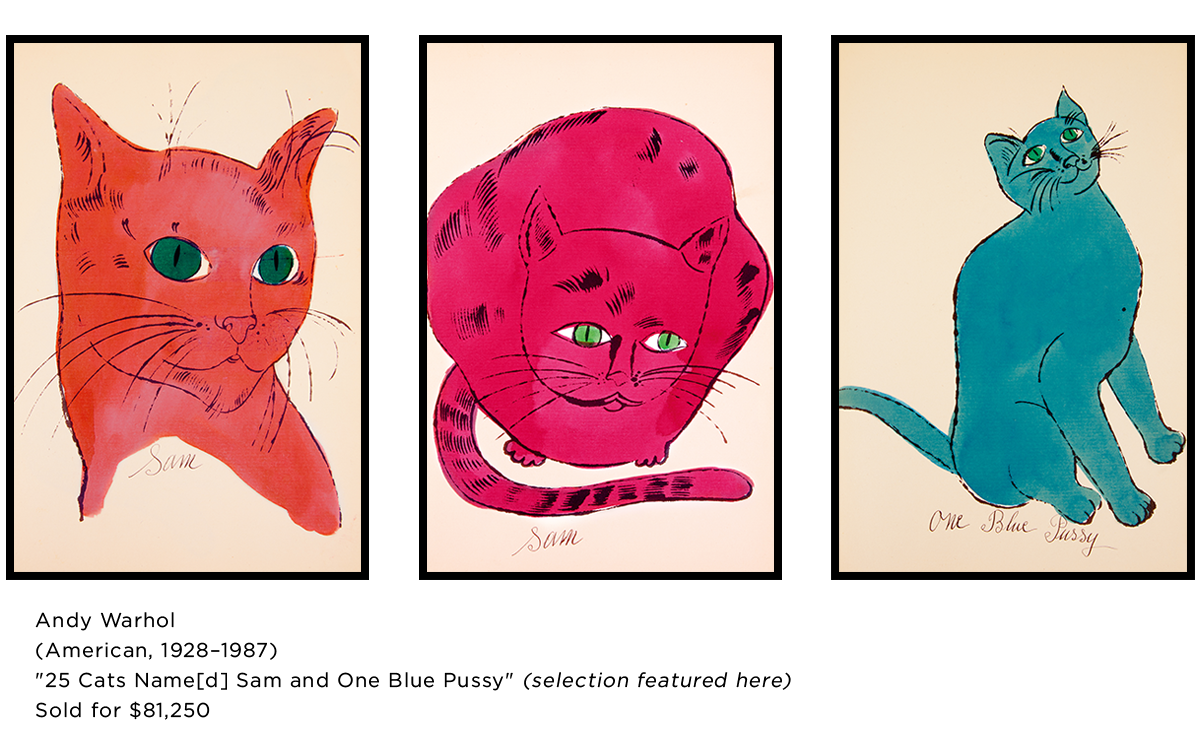 Freeman's Modern & Contemporary Art Department holds two sales each year. They are currently inviting consignments for their next auction, to be held May 2019.