N.C. Wyeth: "Angelica and the Sea-Serpent"

Considered one of America's greatest illustrators of the 20th century, Newell Convers Wyeth pursued his creative calling at an early age before ultimately starting a career as a commercial painter and gaining acclaim for his work with publishing company Charles Scribner's Sons. 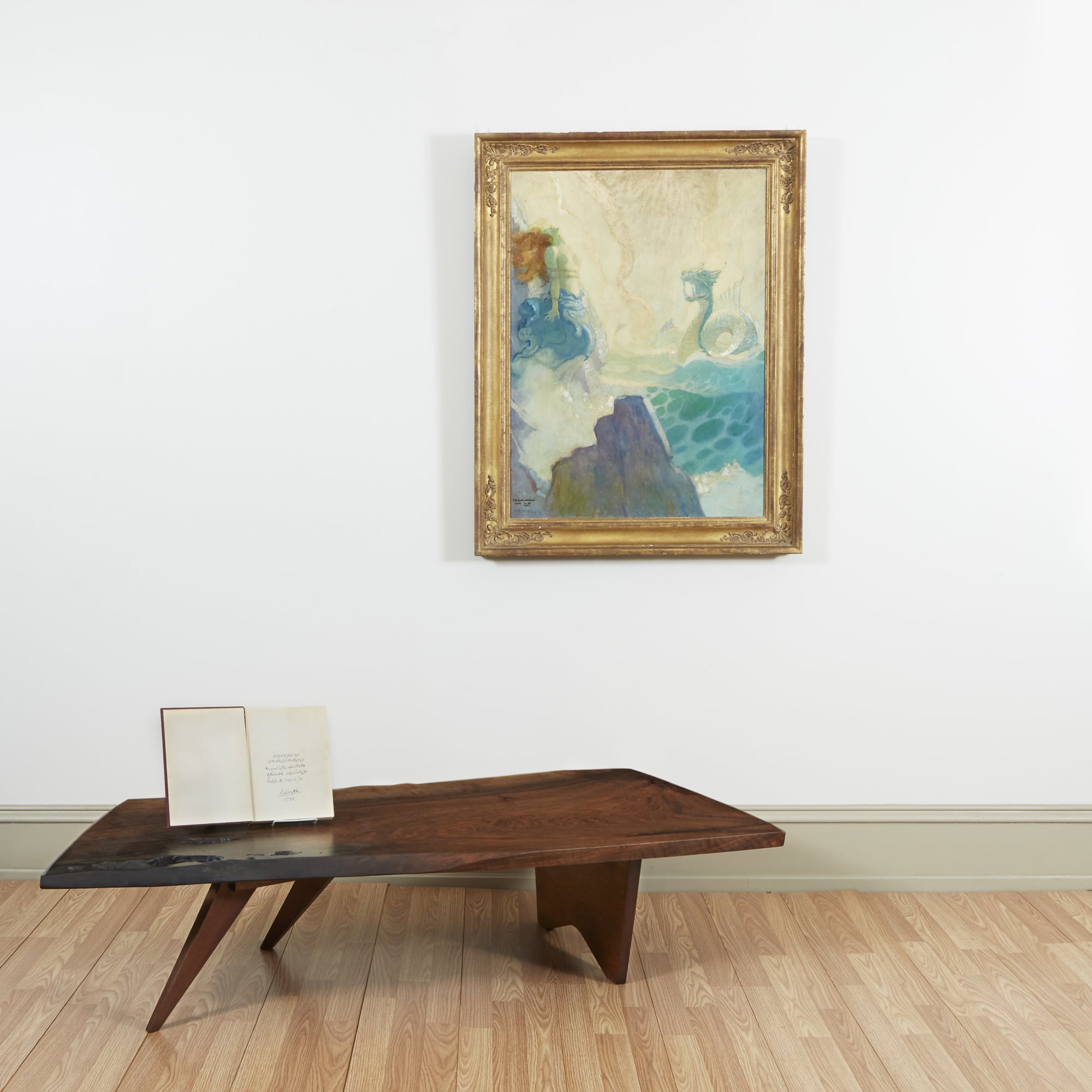 Considered one of America's greatest illustrators of the 20th century, Newell Convers Wyeth pursued his creative calling at an early age, leaving his native Massachusetts in 1902 to enroll at the Howard Pyle School of Art in Wilmington, Delaware. There, he studied along other eager young artists under the tutelage of the "Father of American Illustration," far surpassing his expectations. After graduating, Wyeth started his career as a commercial painter, working on several advertisement campaigns before finally receiving his first commissions for popular magazines of the time, such as Century and Harper's Monthly.

N.C. Wyeth garnered considerable acclaim for his work with the publishing company Charles Scribner's Sons, particularly for his compelling illustrations of Robert Louis Stevenson's Treasure Island in 1911 - his first commission for Scribner's popular series of classical stories. Dated 1924, Angelica and the Sea-Serpent follows this important milestone. It is one of nearly a dozen illustrations which Wyeth designed for Thomas Bulfinch's The Legends of Charlemagne, an iconic collection of European fables and legends from the Middle Ages, all compiled under the reign of Charlemagne, also known as Charles the Great, who ruled over Europe during the eighth century. Published in 1863 by the Cosmopolitan Book Corporation in New York, The Legends of Charlemagne follows the author's popular Stories of Gods and Heroes and his chronicles of King Arthur and His Knights, respectively published in 1855 and 1858. The book is divided into twenty-six chapters, all of which follow the adventures of a heroic character involved in a fight of good versus evil. Accordingly, Wyeth's illustrations for The Legends of Charlemagne always show the stories' protagonists battling against a powerful human force or a mythological creature, such as dragons, giants or, as shown here, a sea-serpent. 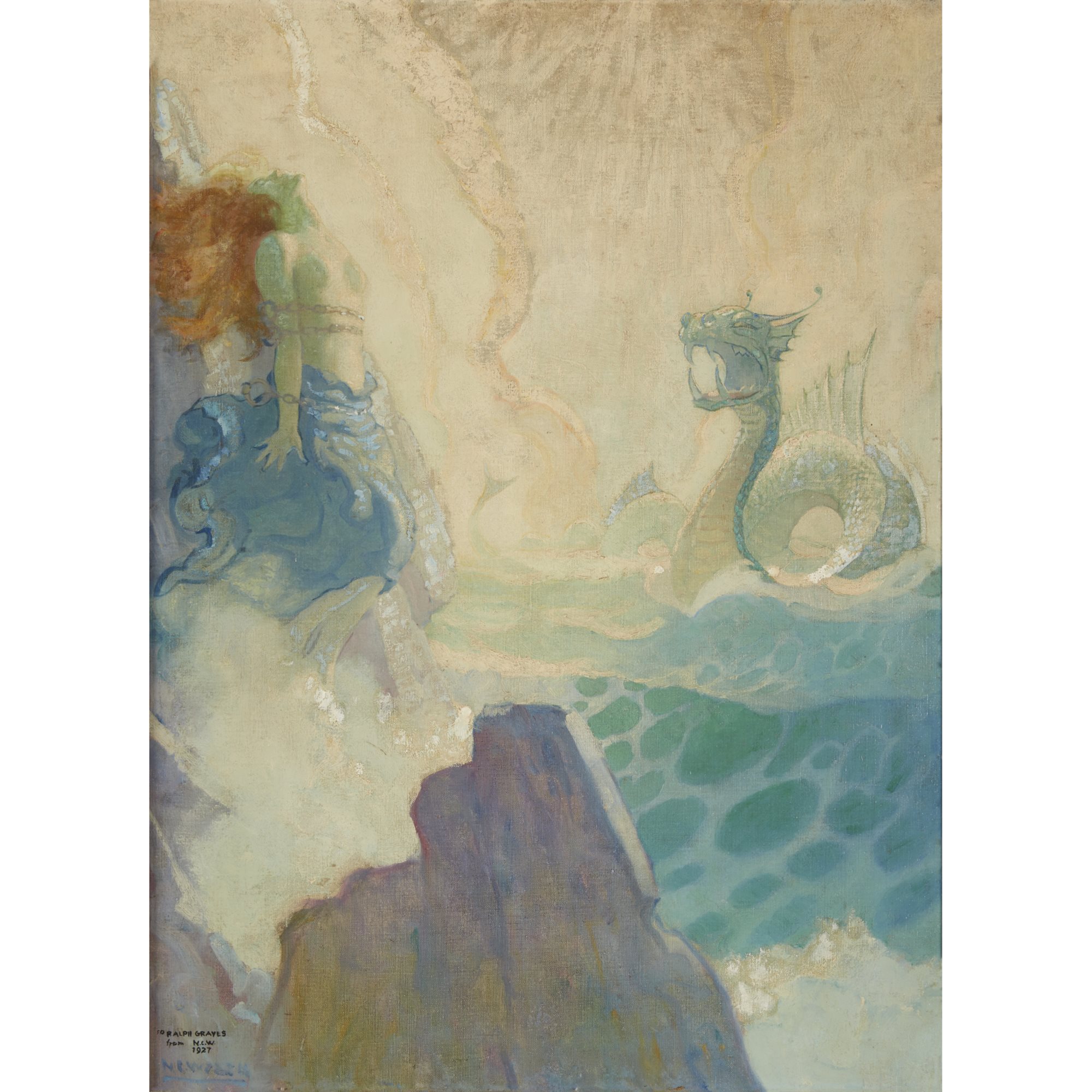 The story of Angelica and the sea-serpent, although loosely based on the Greek myth of Andromeda and Perseus, comes directly from Orlando Furioso, a sixteenth century Italian epic poem written by Ludovico Ariosto. It tells the story of Angelica, Queen of Cathay, who is abducted by local inhabitants while running away from a jilted lover, to be left alone on a deserted rock washed by the sea as a human sacrifice to a serpent known as the Orc. Although in the tale, Angelica happens to be saved by King Roger, who miraculously emerges from the sky on a hippogriff to defeat the monster, N.C. Wyeth choses to depict the moment prior to the rescue of the Queen, right when the sea-serpent emerges from the ocean and charges full speed toward his prey. The drama of the scene is brilliantly captured through the vivid palette that Wyeth employs. The striking turquoises, oranges and purples applied in the artist's characteristically stylized, yet painterly brushstroke, suggest the movement in both the intense swelling of the oily green waves, and the sea-serpent himself. The clouds in the background add a theatrical layer to the scene, parting to reveal the monster, just like theater drapes opening to reveal the main character on the stage. The composition in fact closely follows Pyle's ingenious, methodic, teachings. Angelica, naked to the waist, is positioned in the foreground. Frozen with fear and bound to a rock by three heavy chains, she acts as a strong visual anchor of the scene. Her full mane of red hair, flung far back in the sky, and her clasped hand suggest the terror of the moment. Opposite from her is the monster, whose enormous size is suggested by his tail, which stretches infinitely into the distance. "His jaws, filled with long fierce teeth, are wide open, ready to rip and consume this tender morsel. She has only a few seconds left to live." The result is a powerful image that brings to life the tragic demise of one of literature's most iconic princesses. 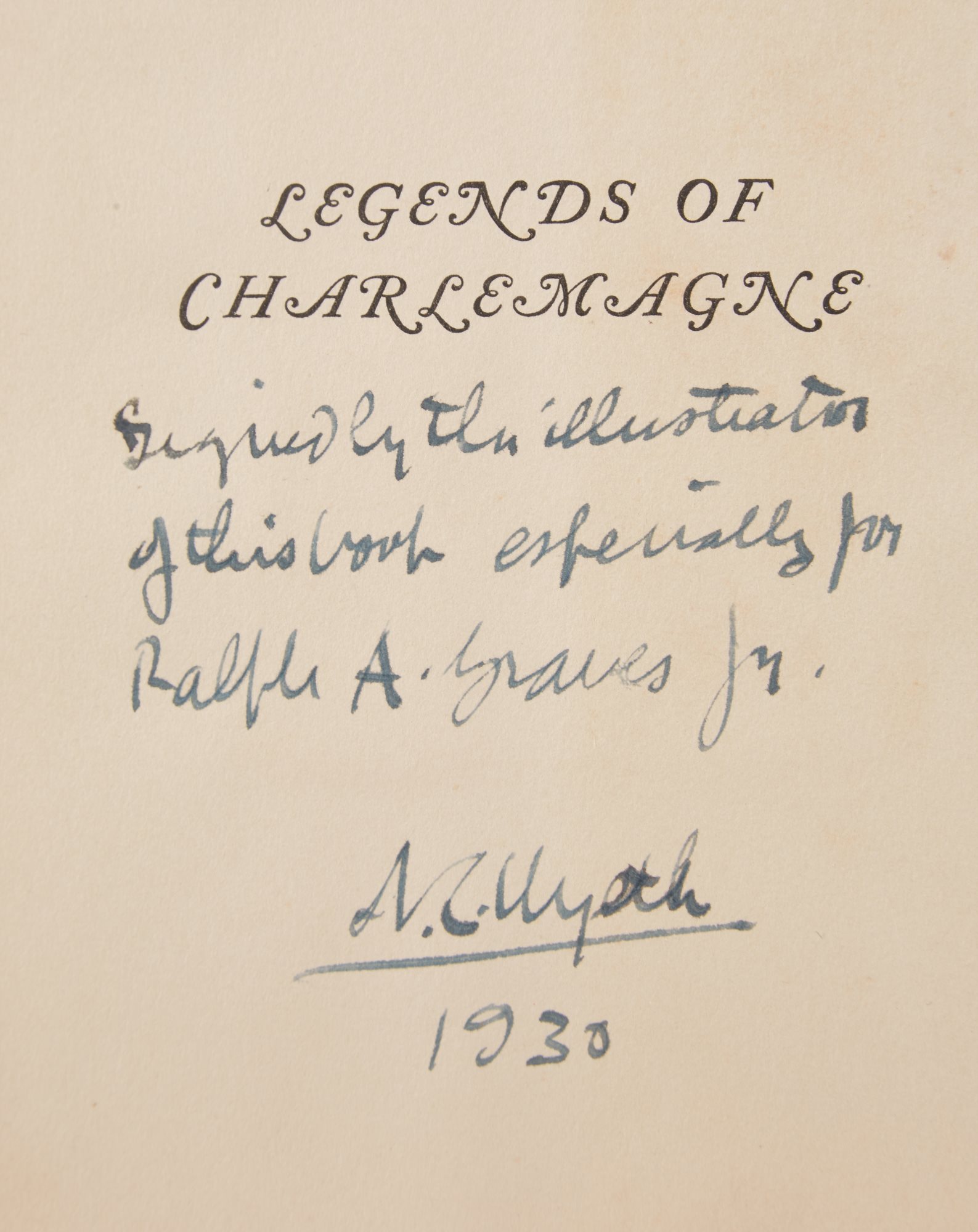 Wyeth's dedication in a first edition copy of the "The Legends of Charlemagne", gifted by the artist to Ralph Graves, Jr.

The present work was gifted by N.C. Wyeth to the son of Ralph Graves, then high-ranking editor at the National Geographic. The two met while the artist was working on a series of murals set to adorn the walls of the new main building of the company in Washington D.C. His son, Ralph Graves Jr., recalls: "Over the course of the project, my father and Wyeth became good friends. When the murals were completed, my father asked Wyeth if he would paint my portrait". Although N.C. politely declined blaming a heavy schedule, he suggested his daughter Henrietta, well-versed in portraits of young children, to take on the project. The artist's daughter successfully completed the portrait. The story could have ended there, but after a while "N.C. Wyeth returned to the stage." Ralph Graves Jr. explains: "I can only speculate about his motive. Did he feel guilty because he himself hadn't painted my portrait, as requested by his friend? (...) Or was he just overwhelmed with relief that Henrietta had brought off the portrait to my parents' complete satisfaction? (...) For whatever reason, N.C. Wyeth gave me his painting of The Sea-Serpent and Angelica[sic] (...) He also gave me the book, Legends of Charlemagne in which the painting appears, with the modest inscription "Signed by the illustrator of this book especially for Ralph A. Graves Jr."

The present painting will be offered with the aforementioned signed copy of The Legends of Charlemagne's first edition, gifted by the artist to Ralph Graves, Jr.