An impressive collection of works on paper depicting a hub of the American Art World, New York City.

For over a century, New York has been the hub of the American Art world, inspiring countless musicians, writers, architects and especially fine artists. Freeman's December 9 American Art & Pennsylvania Impressionist auction boasts an impressive collection of works on paper, many of which were made by artists deeply impacted by an affinity for New York City and its myriad attractive qualities.

Martin Lewis, an Australian born artist, moved to the United States in 1900, settling first in San Francisco and later in New York. His oeuvre, and certainly his most quintessential work, is based almost entirely on New York, its inhabitants, and their daily lives. A true master of intaglio, Lewis's prints are defined by his adept use of light and dark and the distinct contrast of brightness and shadow. Although Australian born, Martin Lewis became a symbol of America's printmaking through his compelling depictions of New York City in the 1920s and 1930s. His renderings of the modern cityscape were part of an aesthetic, which came to be known as "The American Scene." His style seems to evoke a film noir, and emits the unique synergy of New York and its residents. Lot 2, "Stoops in Snow" (estimate: $15,000-20,000) shows strong contrasts of black and white, demonstrating the artist's command of tonal range, while Lot 1 "Yorkville Night" (estimate: $20,000-30,000) is a perfect example of a vignette that could be seen almost as a film still or a cinematic scene, replete with intriguing character groupings.

During his time spent in New York, Howard Cook was captivated by the many tall buildings and structures throughout the city. Using the printmaking skills he learned under Joseph Pennell at the Arts Students League, Cook depicted the construction around him in his etchings and woodcuts. Focusing on the jagged lines, blocky shapes, and the light and shadow interplay between facades, edifices, and streets, Cook dramatically portrayed New York's urban landscape. Exemplifying this practice, "East River" (Lot 4, estimate: $3,000-5,000) shows a wide-angled view of the city from the river, as boats and buildings jut up from the water and concrete. 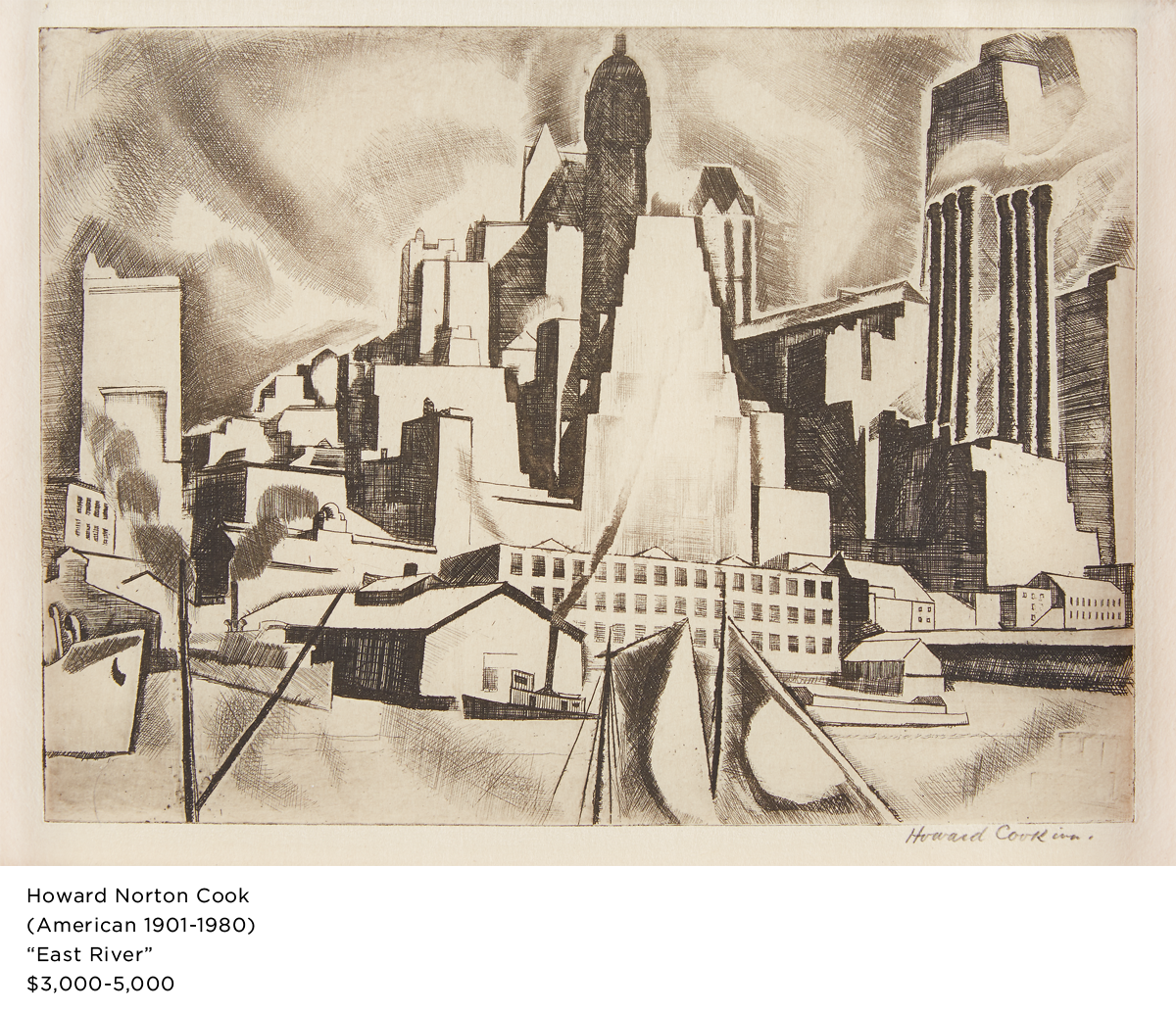 It has been said that Reginald Marsh was to New York what Daumier was to Paris and Hogarth was to London. Marsh was born in Paris to American parents, both of whom were artists. He exhibited an innate gift for the arts early in his life. His paintings, drawings, and prints capture the aura and pace of the ever-changing city at a particularly exhilarating time in its history. Marsh is one of the best-known recorders of the 1930s and 1940s in New York, and he favored depicting primarily the lower classes, laborers, and those on the fringes of society. He concentrated on the characters he observed in places like subways, burlesque halls, and in the streets. His fascination with the city's industry and labor is prominent in the lots featured in the auction; railroads, trains, and the men who worked on them are shown in various views. The bustling environment, particularly in "Erie R.R. Locos Watering" (Lot 14, estimate: $1,000-1,500), is brought to life with steam billowing from the trains and the busy railroad employees. 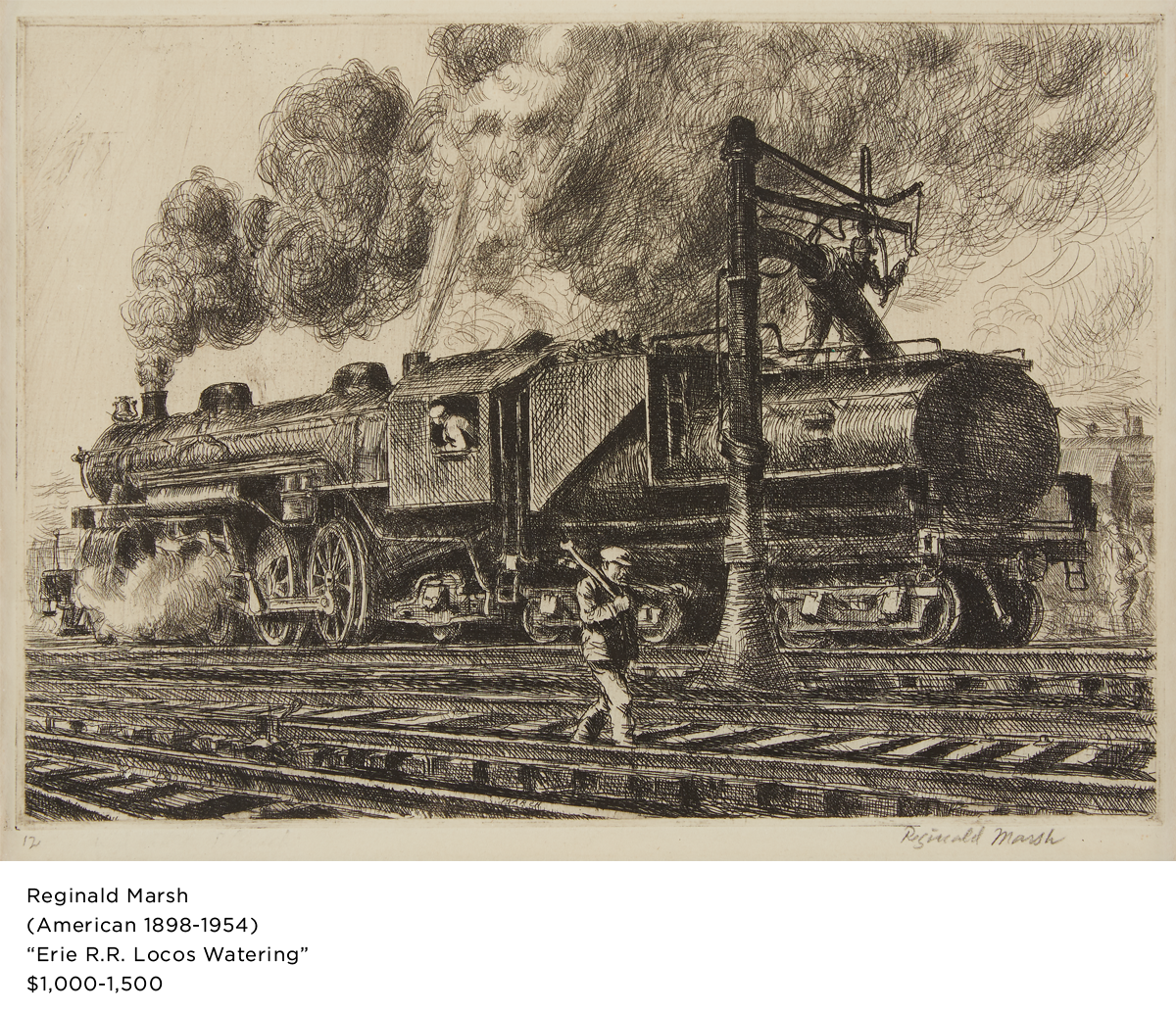 New York City was a fertile ground for innovation and creation, for these three artists and so many others. Guy Carleton Wiggins, whose wintry depictions of New York in the snow are among the most iconic in his body of work. The December 9 auction features five such New York winter scenes by Wiggins, which complement the more monochrome lots that open the sale.