One of the artist's early advertisements

One of the artist's early advertisements comes to auction...

Norman Rockwell is arguably the most iconic painter associated with the Golden Age of Illustration, and will forever be celebrated for his uncanny and heartwarming depictions of a simpler, bygone America. As the artist states himself: "I was showing the America I knew and observed to others who might not have noticed. And perhaps, therefore, this is one function of the illustrator. He can show what has become so familiar that it is no longer noticed. The illustrator thus becomes a chronicler of his time."

Rockwell is perhaps best remembered for his historic involvement with The Saturday Evening Post, a famous Philadelphia-based magazine, for which he painted an impressive 321 cover illustrations. Aside from this, Rockwell also illustrated calendars, and was commissioned to paint a significant number of advertisements for major American companies including Coca-Cola, Jell-O, Sun-Maid Raisins, and Western Union.

Although commercial art was not particularly esteemed at the time, it provided the artist with a reliable source of income. As Rockwell would become more successful and gain popularity, he followed the suggestion of his editors at the Post and went on to charge double his regular cover fee for any commercial venture.

The Melody Stilled by Cold 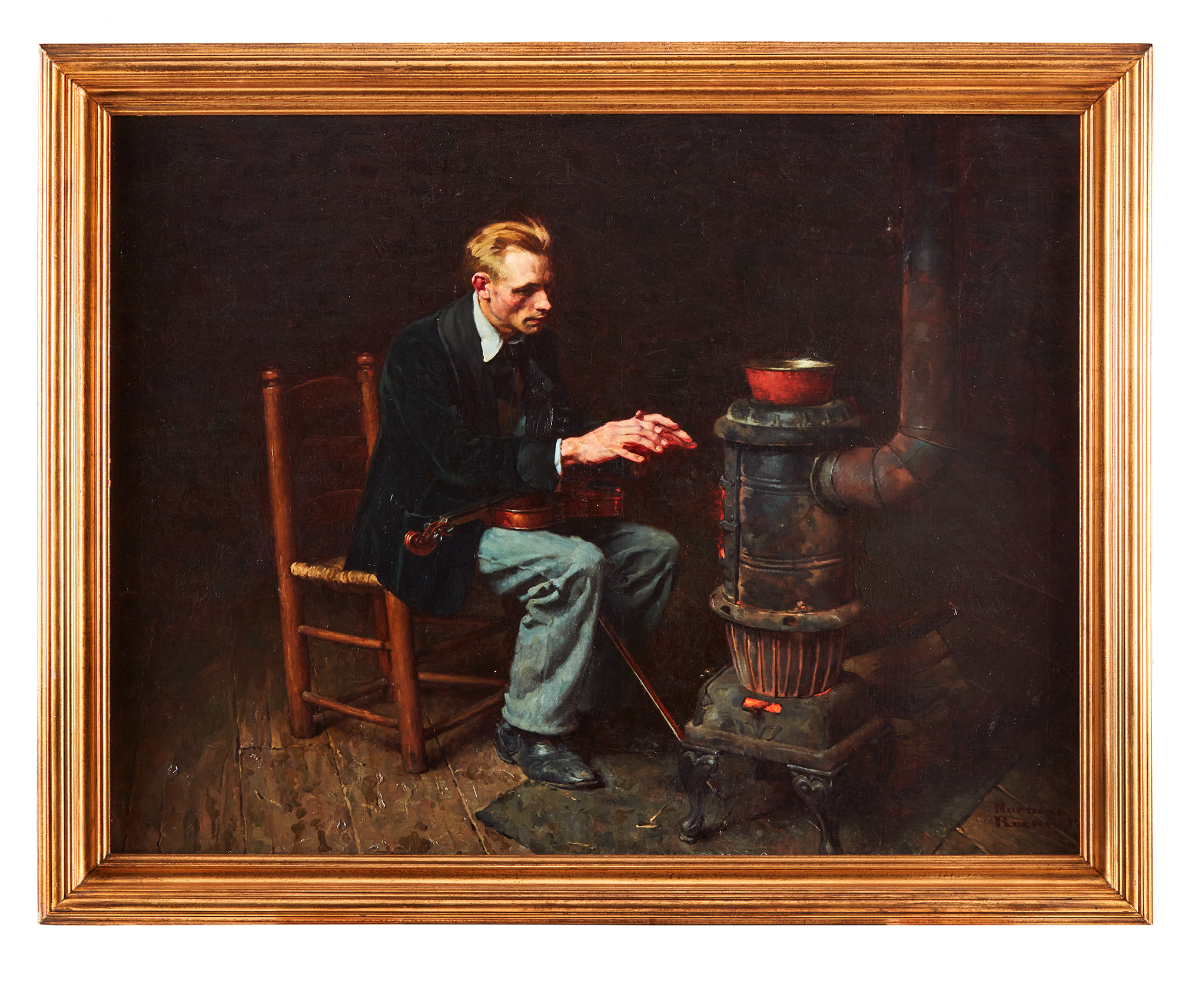 The Melody Stilled by Cold is one of the artist's early advertisements, directly commissioned by Capitol Boilers & Radiators in 1929 along with Judge vs. Widow Anderson. The work was eventually published in The Saturday Evening Post on March 2, 1909 as well as in Better Homes & Gardens a month later.

Affiliated with the United States Radiator Company (now called Corporation) – then the leading American radiator and boiler manufacturer, Capitol Boilers & Radiators was based in Detroit, Michigan. Over the years, the company commissioned numerous advertisement campaigns, and many artists before Rockwell were approached to illustrate the release of a new model, each year.

Like many of these 1920s commercial ads, the present painting adopts an easy narrative, and is executed in Rockwell's signature early style of clear realism with an abundance of fascinating details, and an amazing painterly touch. This style diverges from his later compositions in the 1950s, which tend to be quicker and more sketch-like.

The scene depicts a lonesome violinist in his deserted studio, who puts aside his instrument for a moment, in order to warm himself by the stove, above which one can spot a boiling cup of water. The painting is very restrained, carefully composed with subtle notes of warm color (red and orange) arranged in strategic places.

As the advertisement itself explains: "By the fire he sits, symbol of the sentimental tradition that genius thrives in a garret. Yet the melody he has written, his cold-stiffened fingers can not [sic] translate into the singing beauty which he intended."

To depict the violinist, Norman Rockwell used one of his favorite models, Fred Hildebrandt. An aspiring artist himself, Hildebrandt was a close friend of Norman Rockwell during the 1930s. He earned his living modeling for other illustrators in the region, and posed for several famous works by Rockwell such as Sport and Freedom of the Press: Poor Richard's Almanac.

Here he is depicted as a dapper young man, tall and slim with his luxuriant blond hair combed straight back. As Susan Meyer writes, "Hildebrandt was a model in great demand by the New Rochelle illustrators - a fine bone structure and figure that made him an ideal pirate, hero, romantic figure, or a Yankee Doodle. Fred Hildebrandt had become so valuable to Rockwell, in fact, that the illustrator had hired him as a handyman and used him to track down props and costumes as well."