On November 24, Freeman's will present A Grand Old Flag: The Stars & Stripes Collection of Dr. Peter J. Keim, one of the most comprehensive collections of Historic American Flags ever offered at auction.

Flags are significant emblems of a specific time and often place. The history represented with every additional star of statehood in the evolving design of these Flags can illuminate the complex geographical negotiations, political machinations and occasional military action behind the growth of the United States. Indeed, Flags are often treasured for the personal experience associated with specific events within this country's history. A number of Flags in the collection with period inscriptions on the hoist or attached notes of provenance offer insight into the lives of the individuals who owned them. 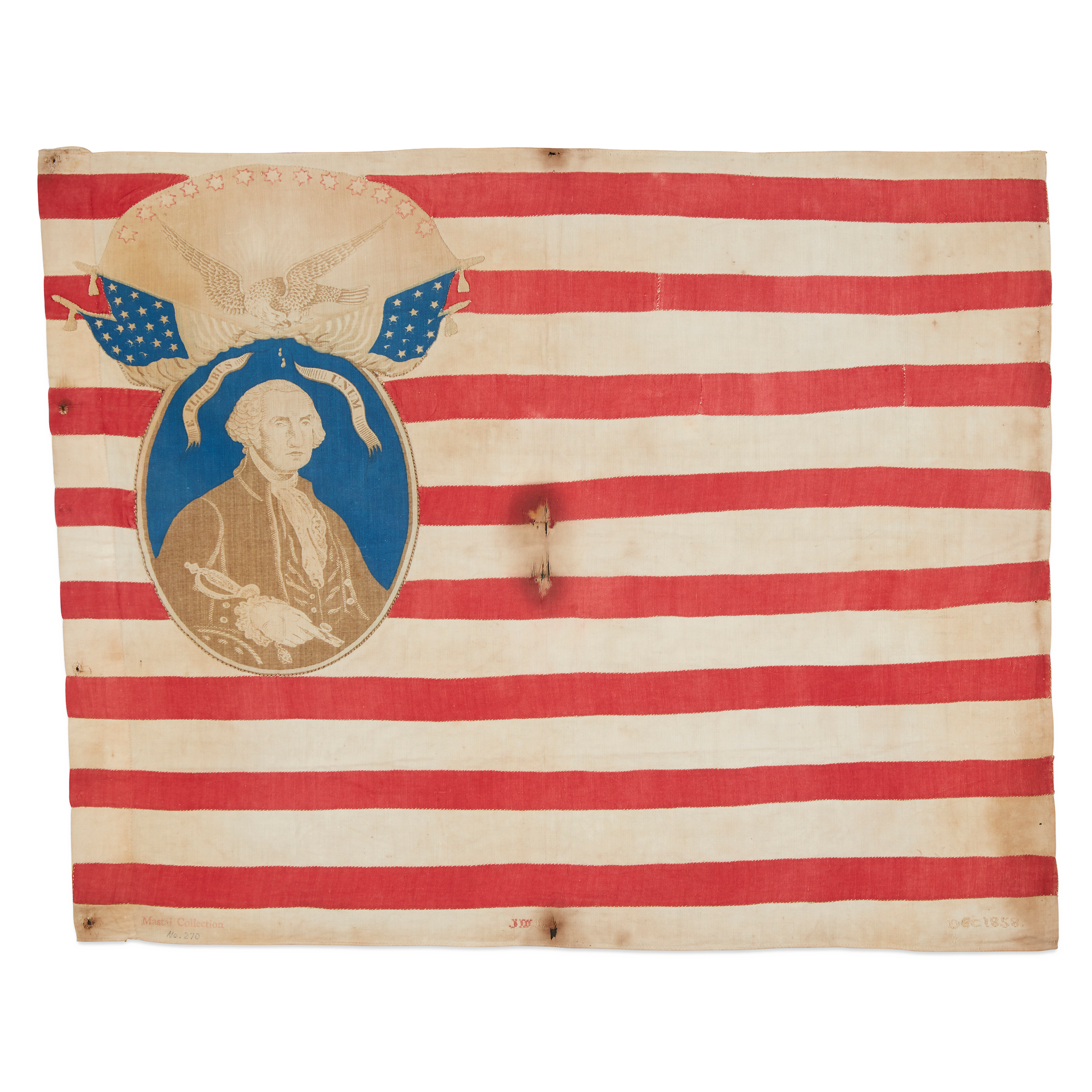 The natavist American Party or 'Know Nothings' flourished in the United States in the 1850s. The party was founded in 1849, growing out of a reactionary, secret fraternal organization- the Order of the Star Spangled Banner. Its members were directed to respond that they knew nothing when questioned about their organization. The party was anti-immigration and anti-Roman Catholic and popular enough to claim 43 seats in the Congress of 1855. The Know-Nothings honored George Washington above all else, as demonstrated in the present lot where the canton and stars are replaced with a portrait of the first President. 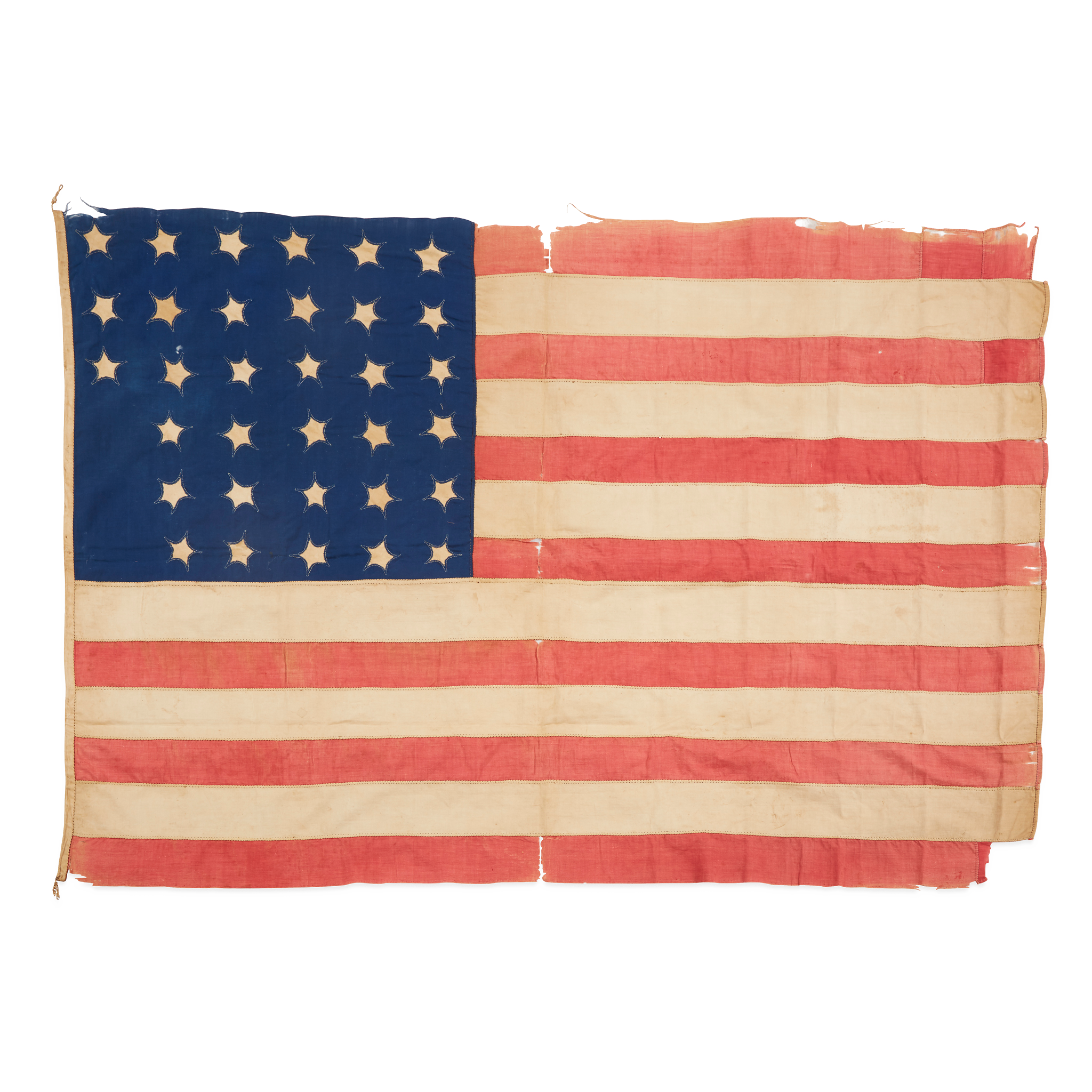 James Marshall enlisted at Providence, April 17, 1861, with the 1st Rhode Island Detached Militia, later renamed the First Rhode Island Volunteer Infantry Regiment. The Regiment was immediately dispatched to Washington, DC for the defense of the Capitol and then attached to Burnside's Brigade, Hunter's Division, McDowell's Army of Northeast Virginia. In July, the regiment advanced on Manassas and on July 21, took part in the First Battle of Bull Run. James Marshall mustered out August 2, 1861. 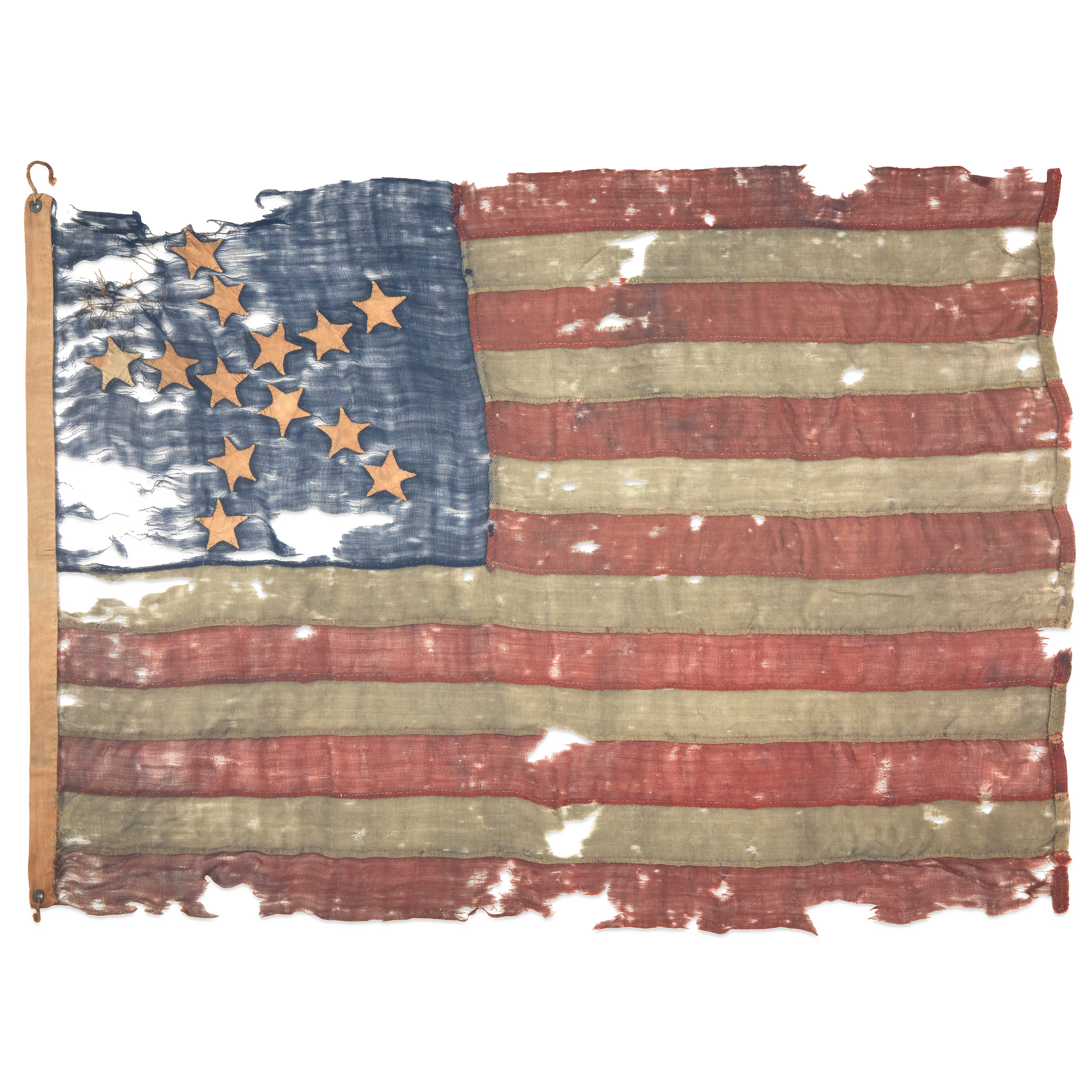 On June 14, 1777, the Continental Congress in Philadelphia passed the First Flag Resolution which stated, "Resolved That the Flag of the united states be 13 stripes alternate red and white, that the Union be 13 stars white in a blue field representing a new constellation." No specific proportions, star-form or configuration of stars were given. 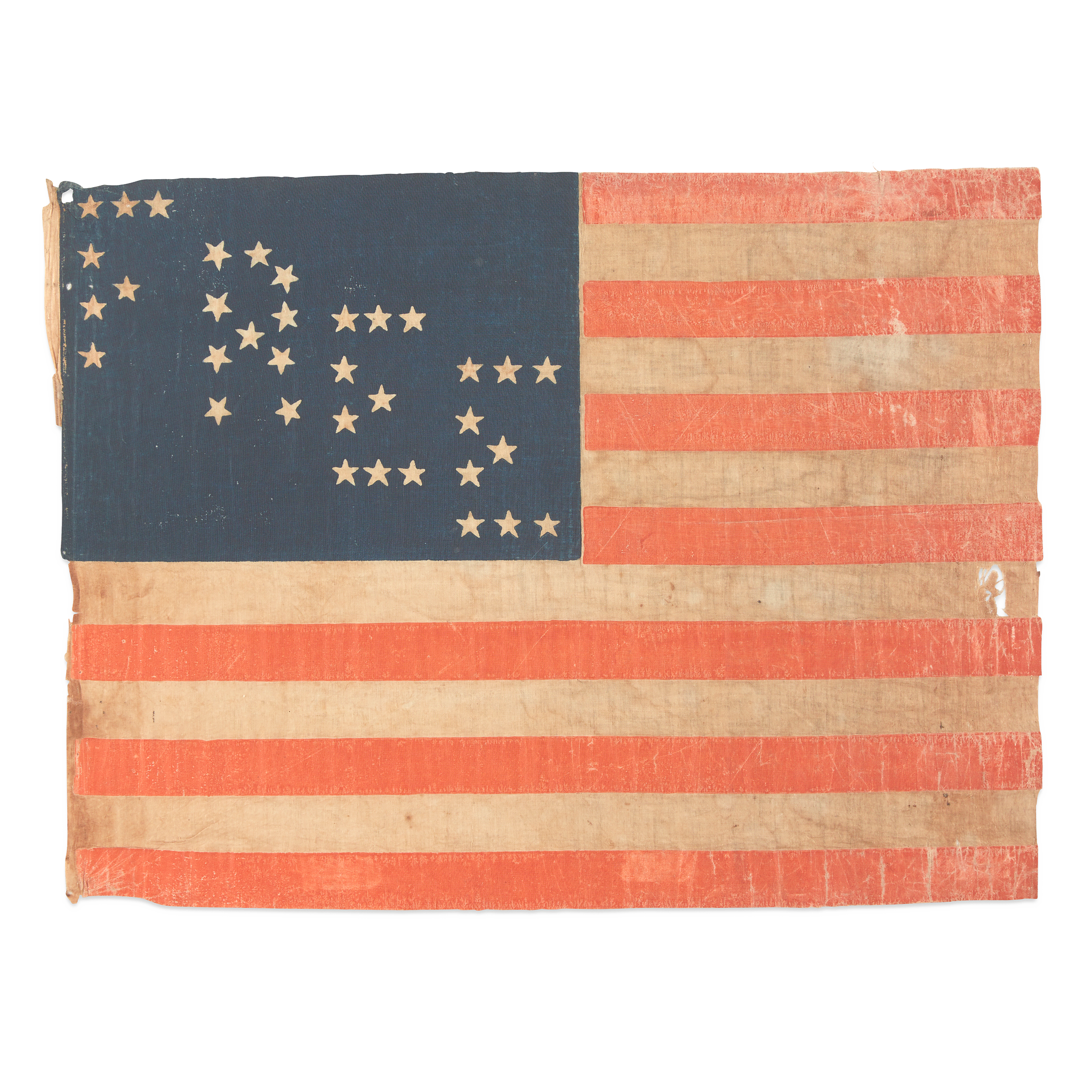 Founded in Buffalo, New York, the Free Soil Party was short lived, 1848 to 1854. The Party opposed the expansion of slavery into new territories, but believed that the government could not abolish slavery where it already existed. "Free Soilers" feared and resented the potential competition of a black labor force in the new territories. Their ironic slogan was "Free soil, Free speech, Free labor and Free men." 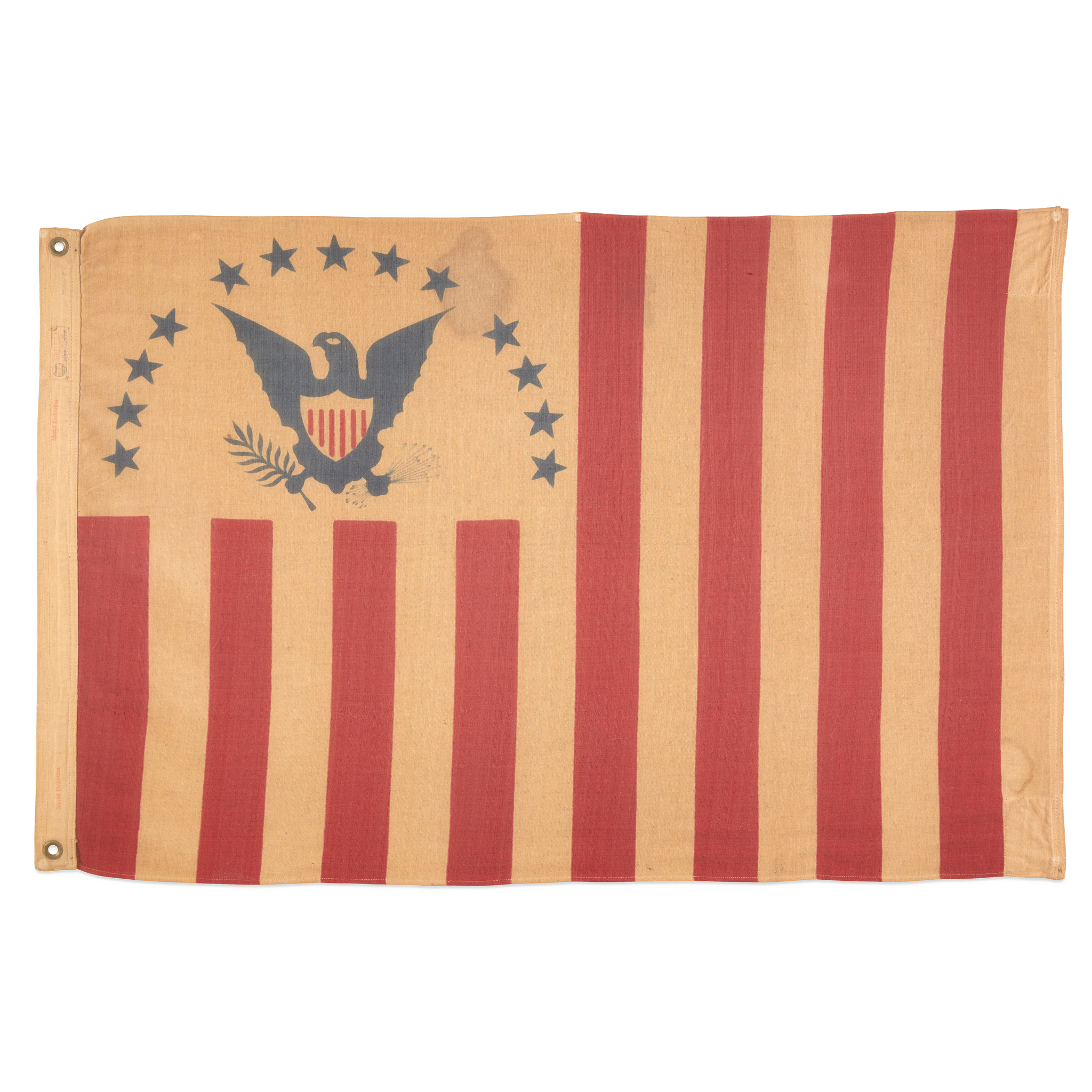 At the conclusion of the Revolutionary War, the Navy was disbanded and its warships sold. Smuggling on the high seas was rampant and the tariffs to be collected on imports largely avoided. In an effort to remedy the situation and raise much needed income, Secretary of the Treasury, Alexander Hamilton urged Congress to pass the U.S. Revenue-Marine in 1790. This act created the only American armed maritime service of the time. The official Ensign of the Revenue-Marine was created in 1799, with an eagle with shield, 13-Stars and 16 stripes representing the sixteen states of the time. The present version of the Revenue Service Ensign was adopted in 1868. 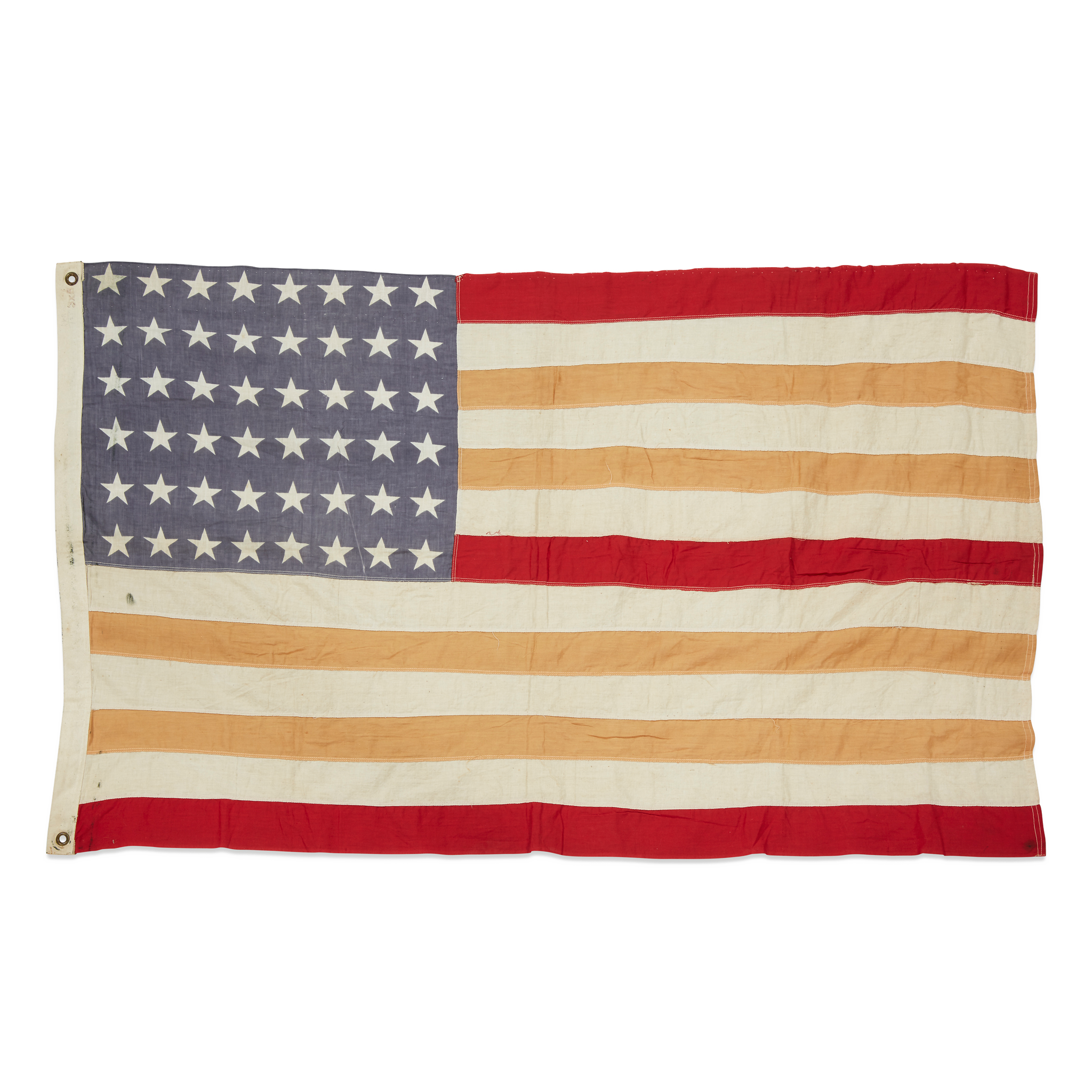