The Origin of the George Nakashima Holtz Table

The extraordinary table was unlike any Nakashima had completed, save his Peace Altar completed the same year.

George Nakashima's storied career as a woodworker and guru was punctuated through the decades following the Second World War with periods of great creation, but perhaps none more poignant than his encounter with a superlative and unusually large slab of walnut in 1984. As the story goes, Nakashima had a revelation as he awoke from the anesthesia that accompanied a surgical procedure. From that slab of wood he would create "The most extraordinary piece of furniture ever made...a symbiosis of nature and man in the deepest spiritual sense."

From this idea, he developed the design and concept for an "Altar for Peace," the first of six such tables he sought to install on every continent. In 1986 his first Altar was indeed completed and brought to St. John the Divine in New York City, where it remains today.

The Peace Altar project begun in 1984 ran concurrently, of course, to Nakashima's domestic furniture commissions. That year, he was approached by a D.C. architect, David A. Holtz, to create a dining table to serve as a truly spectacular piece of art in Mr. Holtz's Potomac, Maryland home. 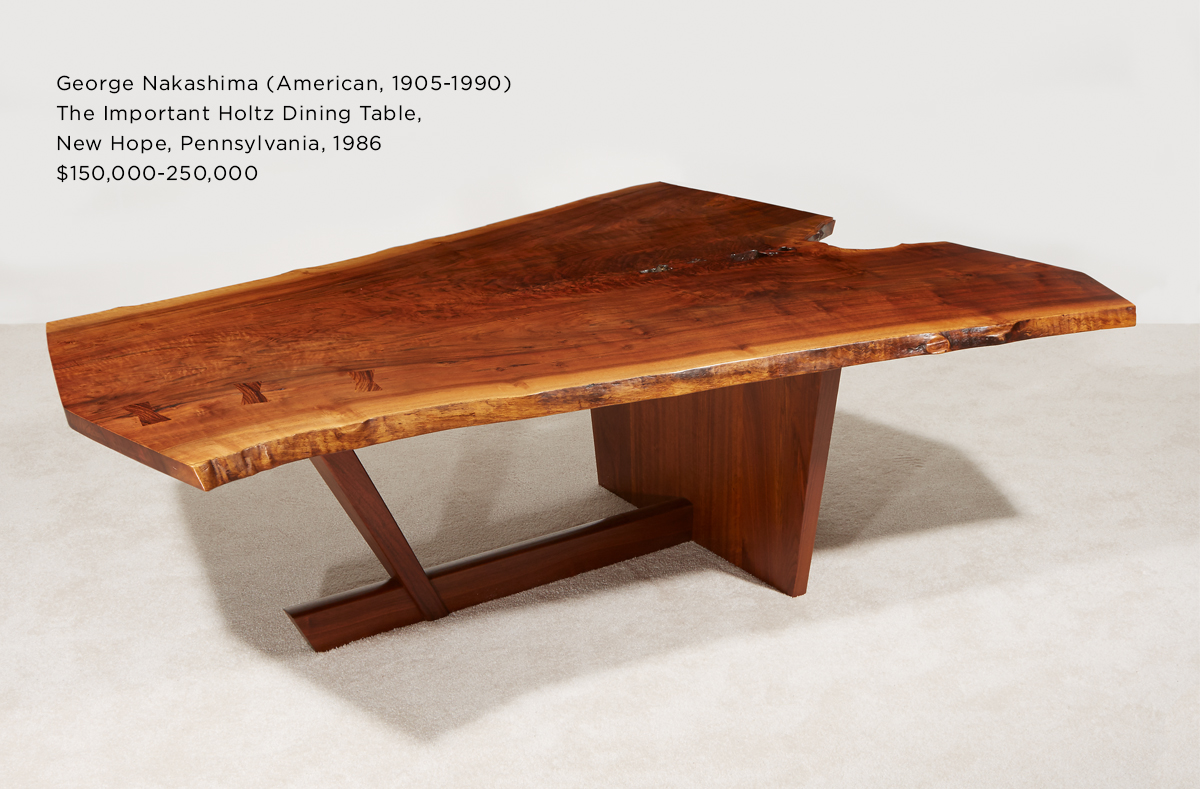 For the project, Nakashima selected a "very fine slab of Claro walnut," thick and heavily figured. To support the large, triangular piece of Claro walnut, Nakashima turned to his "Minguren"-type base, named after the association of designer-craftsmen in Japan. The same base design was then also being modified for use in his Peace Altar, a shaped, single support previously found only on Nakashima's "Minguren" desks.

Correspondence with David Holtz and a series of sketches completed through the winter of1985, reveal modifications in the design of the table top, most notably three prominent rosewood butterfly keys, opened knots, bark pockets and a unique, fitted and removable Claro walnut panel to fit within the natural recess of the tree's major dividing branches, thus expanding the table's seating area.

The extraordinary table was unlike any Nakashima had completed up to that date, save his Peace Altar completed the same year. As a result, the Nakashima catalogue has named all future tables of the same design, "Holtz" for the original table's owner. George Nakashima Woodworker estimates no more than six such tables have ever been created. The present lot was the first.