The story of a painter and a cabinetmaker

What the pairing of Nicolino Calyo and Thomas Affleck's work tells us about early Philadelphia history—on offer at Freeman's May 3. 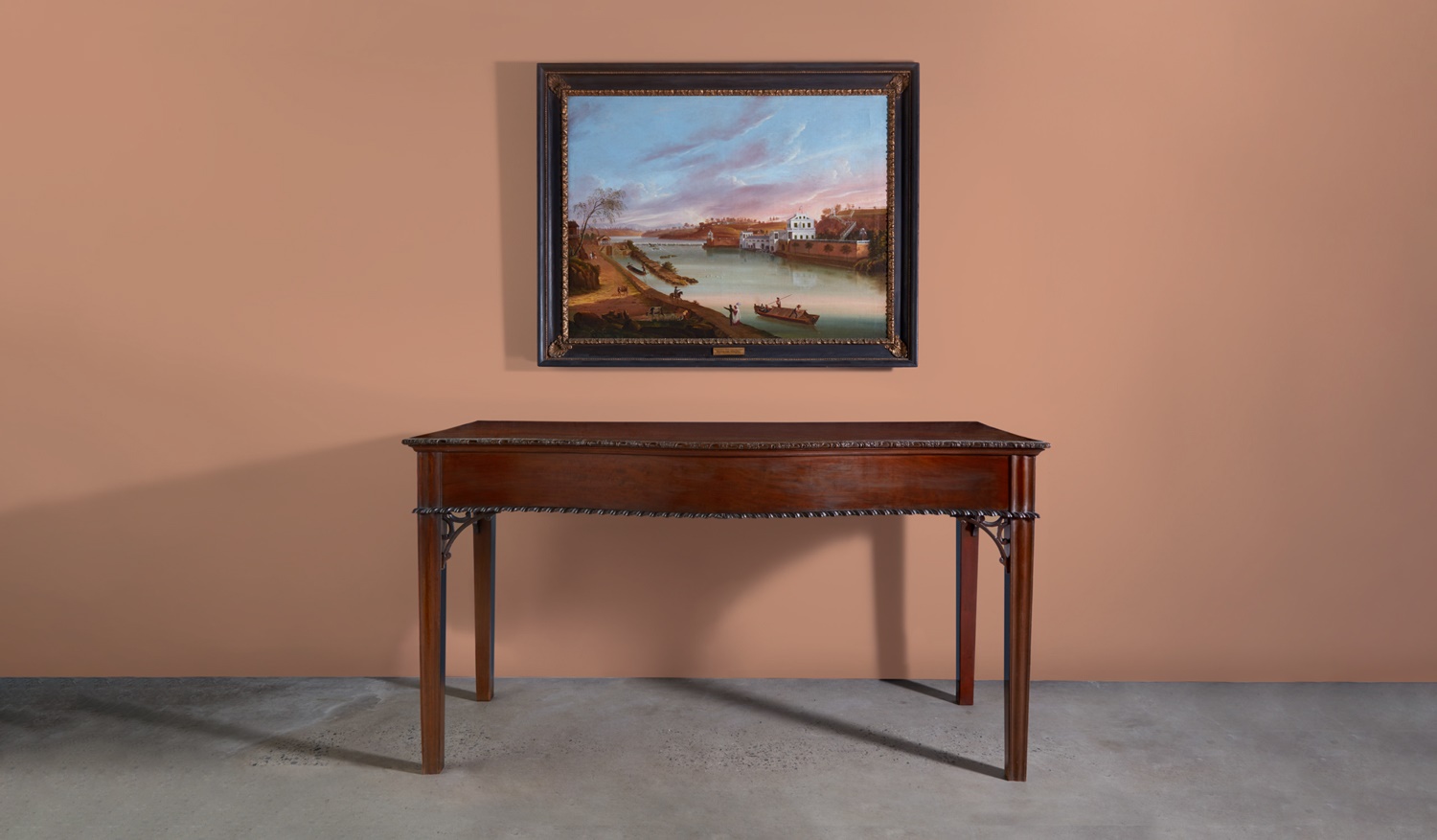 Though created nearly 75 years apart, the dignity and elegance of the View of the Schuylkill River & Fairmount Water Works by Italian-born Nicolino Calyo (1799-1884) and the Chippendale carved figured mahogany sideboard table, attributed to Scottish-born Thomas Affleck (1740-1795), complement one another.

A fascinating artist, Calyo was born in Naples and received classical art training in the Italian figure and landscape tradition and technique at the Naples Academy. Politically active as a young man, Calyo was forced to leave Italy in 1821 during the chaos surrounding attempts to unseat Ferdinand I. For the next eight years, Calyo traveled and sketched throughout Europe and ultimately came to Baltimore, Maryland in 1834 and moved permanently to New York in 1835.

Calyo visited Philadelphia the same year, where he captured numerous versions of the iconic Fairmount Waterworks, which was well admired for its state-of-the-art industrial engineering and Classical Revival beauty. The present work is likely derived from Calyo’s earlier watercolor and gouache sketches of the subject. A number of the artist’s versions of this view—all in gouache on paper—are known to exist, including one, View of the Schuylkill River and Fairmount, that is presently in the collection of the Philadelphia Museum of Art. 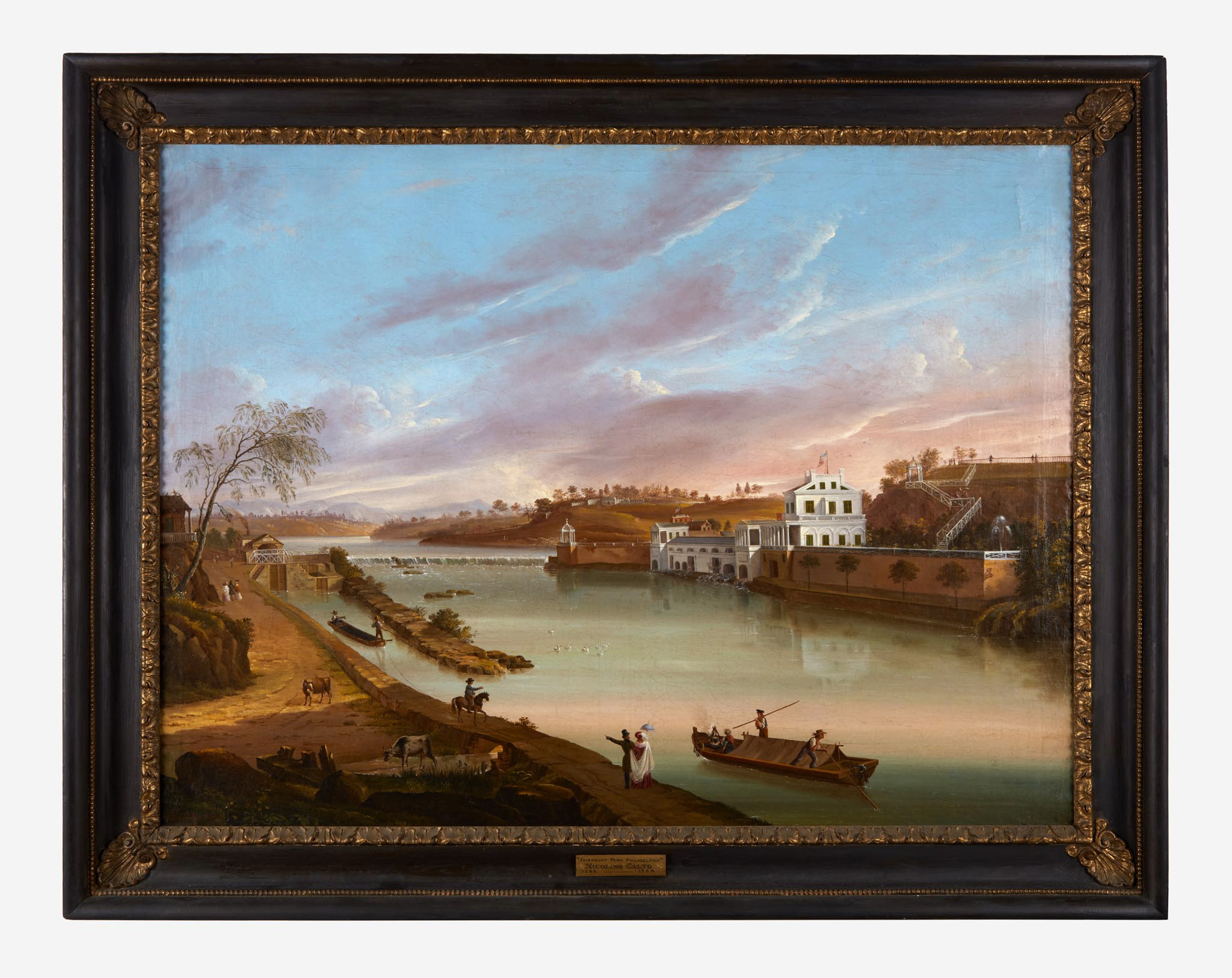 Calyo’s large and enchanting View of the Fairmount Water Works is the artist’s finest and most populated version of the subject, as well as the only oil on canvas of the subject known to exist. Highly, yet delicately, detailed and worked in soft, slightly chalky luminous color, the panoramic view is picturesque, with an almost magical stillness. Calyo’s palette and technique of a European trained painter sets it apart from the many other artists who painted the renowned landmark.

Here, the Calyo hangs above a rare Chippendale carved and figured mahogany sideboard table, circa 1775, long attributed to Thomas Affleck—one of Philadelphia’s most prestigious and successful cabinetmakers. Also an emigrant, Affleck was born in Scotland and apprenticed there before moving to London in 1760 and to Philadelphia in 1763. Bringing the latest Chippendale designs with him from London, Affleck attracted the elite of Philadelphia, earning commissions from prominent families such as the Penns, Cadwaladers, and Hollingsworths. 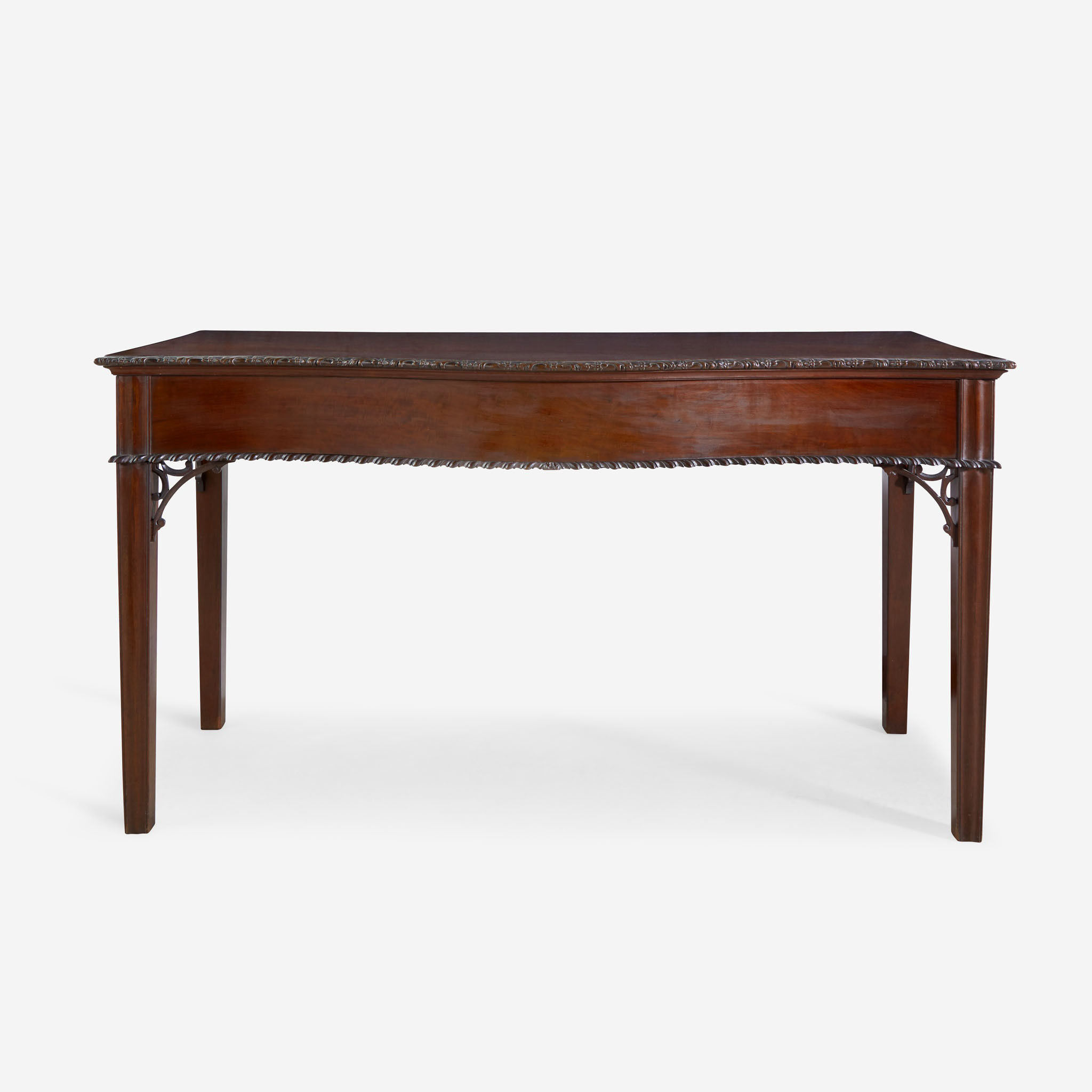 Among the fashionable forms of furniture from London was the sideboard table, which was used for serving and display in the dining room, but was also useful in drawing rooms and hallways for other purposes. Alexandra A. Kirtley, the Montgomery-Garvan Curator of American Decorative Arts at the Philadelphia Museum of Art, has written about this table: “The design of this sideboard table form was derived from a type illustrated in the third edition of Thomas Chippendale’s Gentleman’s and Cabinet-Maker’s Director (1763), a progression from the plainer marble-topped example illustrated in the first addition (1754). The design of later sideboard tables conformed to the new aesthetic for lighter, daintier profiles, with the result that, as Chippendale explained, ‘the Tops will be better works of Wood.’”

The superior execution and design of this sideboard table was first recognized when published in William Macpherson Hornor, Jr.’s Blue Book Philadelphia Furniture (1934) as pl. 264, with the editorial comment, “It is the Acme of Perfection.” Kirtley further describes the table, “This quietly restrained table is deceptively simple. Ornament appears at the right places and with just enough vitality not to overwhelm the strong lines of the form. The result is a design with timeless sophistication, a singular expression of a form that would become a standard in Philadelphia houses by the 1780s…”

The table, which retains its original drawer hardware and height, has been on loan to and exhibited at the Philadelphia Museum of Art for a number of years. It carries an impressive provenance: Likely originally acquired in 1775 by Quaker merchant and abolitionist James Pemberton (1723-1809) on the occasion of his marriage to Phoebe Lewis Morton (1738-1812); thence by descent in the Pemberton/Morris family to the present owner.

View the rest of our May 3 American Furniture, Folk and Decorative Arts auction.