Pierre-Auguste Renoir’s Roses | An important deaccession from the VMFA

A deaccessioned work from the Virginia Museum of Fine Arts by the French Impressionist Master makes its debut at auction...

Update: Roses by Pierre-Auguste Renoir—deaccessioned by the Virginia Museum of Fine Arts, Richmond, Virginia—realized over triple its pre-sale high estimate, selling for $302,400 in the February 23 European Art & Old Masters auction. 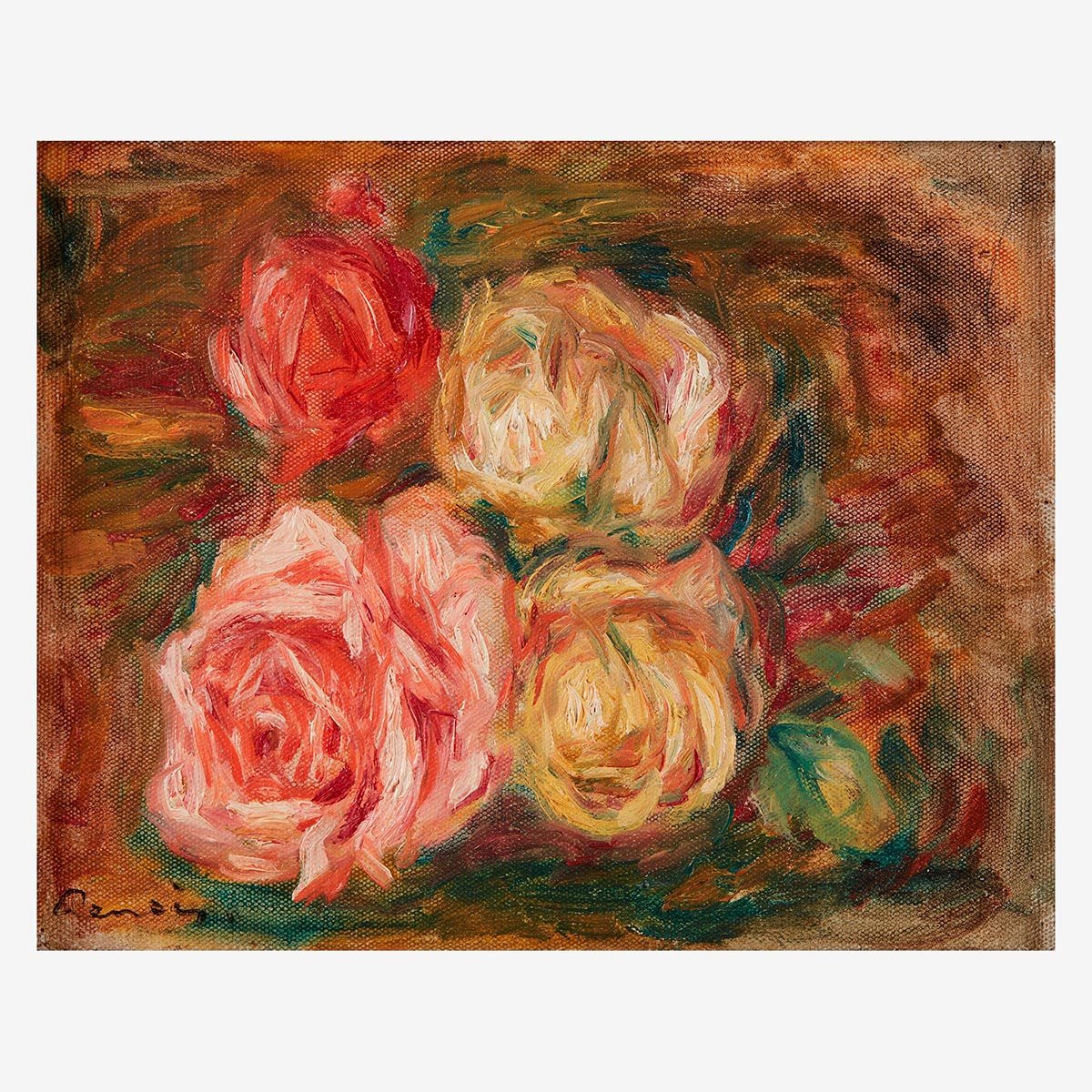 A previously unrecorded work by French Impressionist Master, Pierre-Auguste Renoir, will make its debut at auction as one of the many highlights of Freeman’s February 23 sale of European Art & Old Masters.

In 1907, Renoir purchased the estate of Les Collettes in Cagnes on the French Riviera, where he permanently moved in the fall of 1908. It is there, amidst the picturesque olive groves and in the bright light of the Mediterranean, that he painted a series of still life with roses in the later years of his career. Such is the case of Roses, which the artist executed in 1917, just two years before his death.

According to a letter by Jean Renoir dated March 26, 1917 (which will accompany the painting, alongside six other letters), Roses was offered directly from Renoir to family friend Captain William Boissel and his wife, Élise. It was delivered by the artist's son, filmmaker Jean Renoir who, at the time, served as a WWI war pilot under Captain Boissel's orders in the French Air Force.  The painting then passed into the possession of Mrs. Boissel’s niece, Mrs. Louis Cauvin, née Anne-Henriette-Alice Dorsner (of Bayonne, France) who in turn bequeathed it to her daughter, Nelly C. (Nono) Stone, wife of John E. Stone (of Alexandria, VA), who gifted it to the Virginia Museum of Fine Arts in Richmond, Virginia in 1988 after his wife’s death. 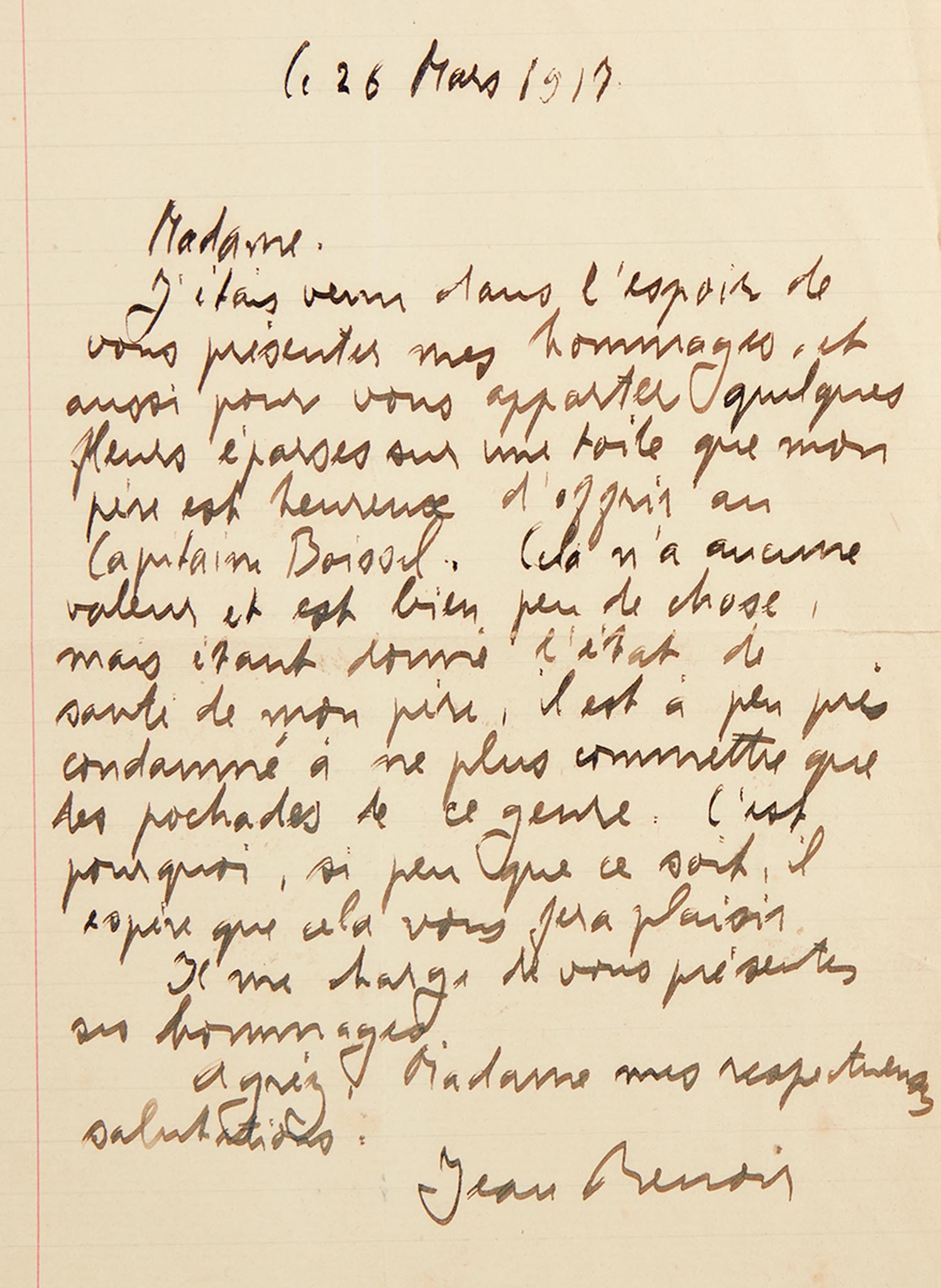 The painting, Jean wrote to Captain Boissel, was a mere token of friendship: "several flowers scattered on a canvas" having "no value" and "of little importance." Rather than belittling his father's work, Jean was more likely referring to his poor health, namely his crippling arthritis, which only allowed him to paint with a paintbrush strapped between his fingers, and "condemned him to produce nothing but such hasty sketches." In his letter, Jean Renoir also echoes his father's general attitude towards his late works, many of which were still lifes, which he considered as visual "notes."

Still life painting was an important subject in the oeuvre of Renoir, who first started to paint flowers on porcelain as an apprentice for the Manufacture de Sèvres. In his later paintings, flowers remained a current motif: if not used as the main subject of the composition, they could be spotted as hat decorations, brooches, hidden in a garden, or even used as a backdrop. 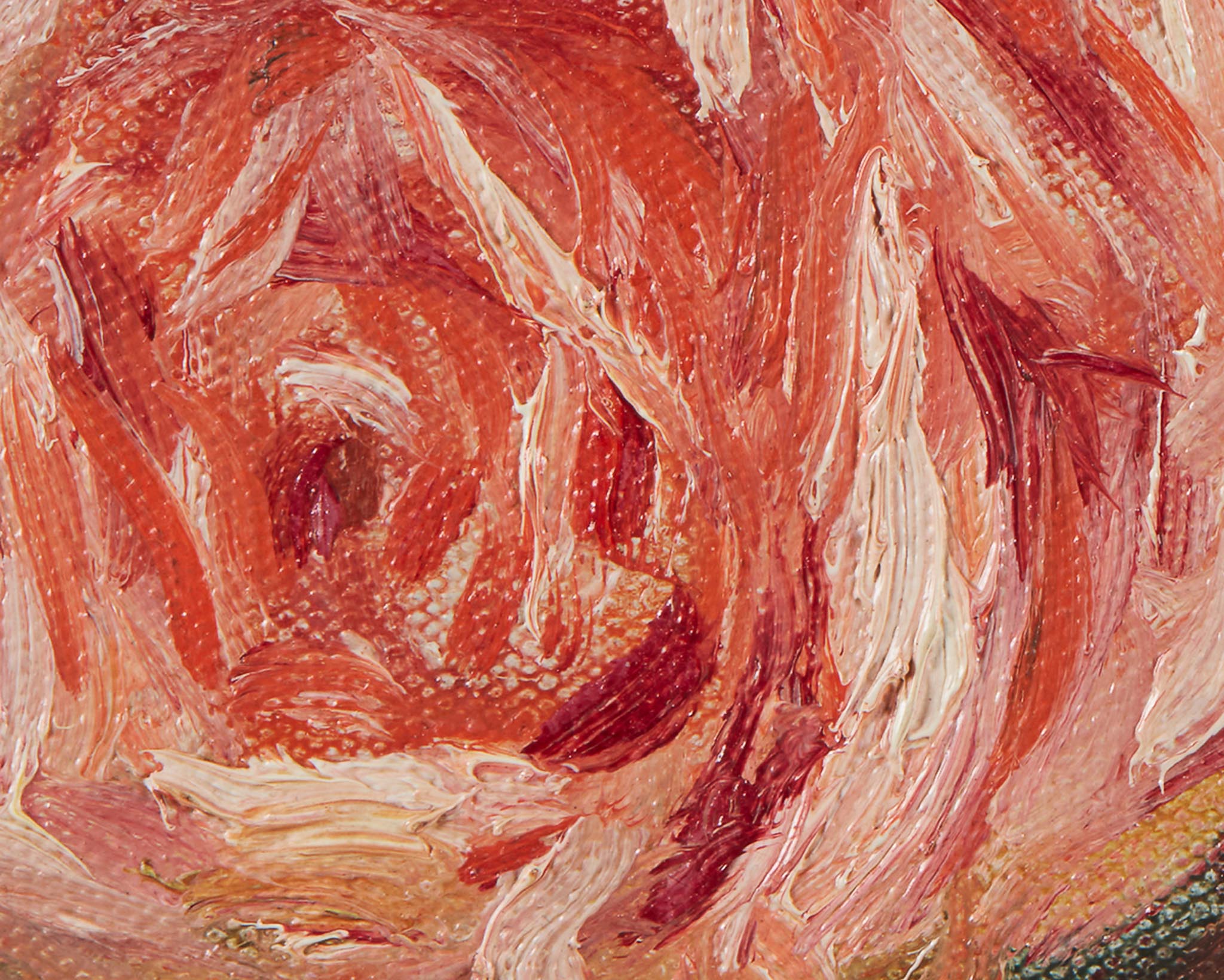 Renoir's still lifes are often characterized by a rich texture, a warm palette and overall informal composition. With the thick, loose brushstrokes used to render the fully bloomed roses, and the thinly painted background revealing the texture of the canvas, Roses shares the overall qualities of improvisation and intuitiveness often associated with watercolor painting. The deep tones, mostly oscillating between reds and browns, give the work a sense of sensuality, often associated with the flower. It also links Renoir's painting to the Old Masters he studied and revered, namely Peter Paul Rubens and François Boucher. In fact, Roses channels many aspects of 18th century French painting especially through its feathery, energetic brushwork - a pochade as stated by Jean Renoir in his letter, meaning a quick sketch which instantly captures the colors and the atmosphere of a scene. Through his lush, creamy touch, Renoir essentially dissolves the contours of the composition into one jubilant, abstract playground, thus giving the impression that the painting is being completed before our own eyes. The result is a wonderful example of spontaneity and color play - a bold, sensual take on still life painting.

To Renoir, and to many other artists of the time, still life painting represented financial security since it was deeply appreciated, and sought-after, by his clientèle, especially abroad. It also enabled Renoir to paint more freely, and experiment with endless technical and colorful combinations, as he confessed to his friend and student Albert André, "I just let my brain rest when I paint flowers (...) When I am painting flowers, I establish the tones, I study the values carefully (...) The experience I gain in these works, I eventually apply to my (figure) pictures."