The Power of the Dragon: Mythical Beasts in Asian Art

From its undulating, serpentine body to its ferocious claws, teeth, and bulging eyes, it’s instantly recognizable: within the expansive field of Asian art, the dragon holds pride of place as a frequent character. Often a symbol of power relating to the realm of water—including floods and rainfall—this mythological creature fittingly dominates Freeman’s upcoming Asian Arts auction, held April 13, the month known for auspicious showers.

From embroidery and needlework to porcelain, jade, and bronze, dragons are pictured in a wide array of mediums throughout Asian Arts. Here, Freeman’s specialists highlight six lots that are a must for collectors of Asian art and historic objects.

1. A powerful creature in a classic form 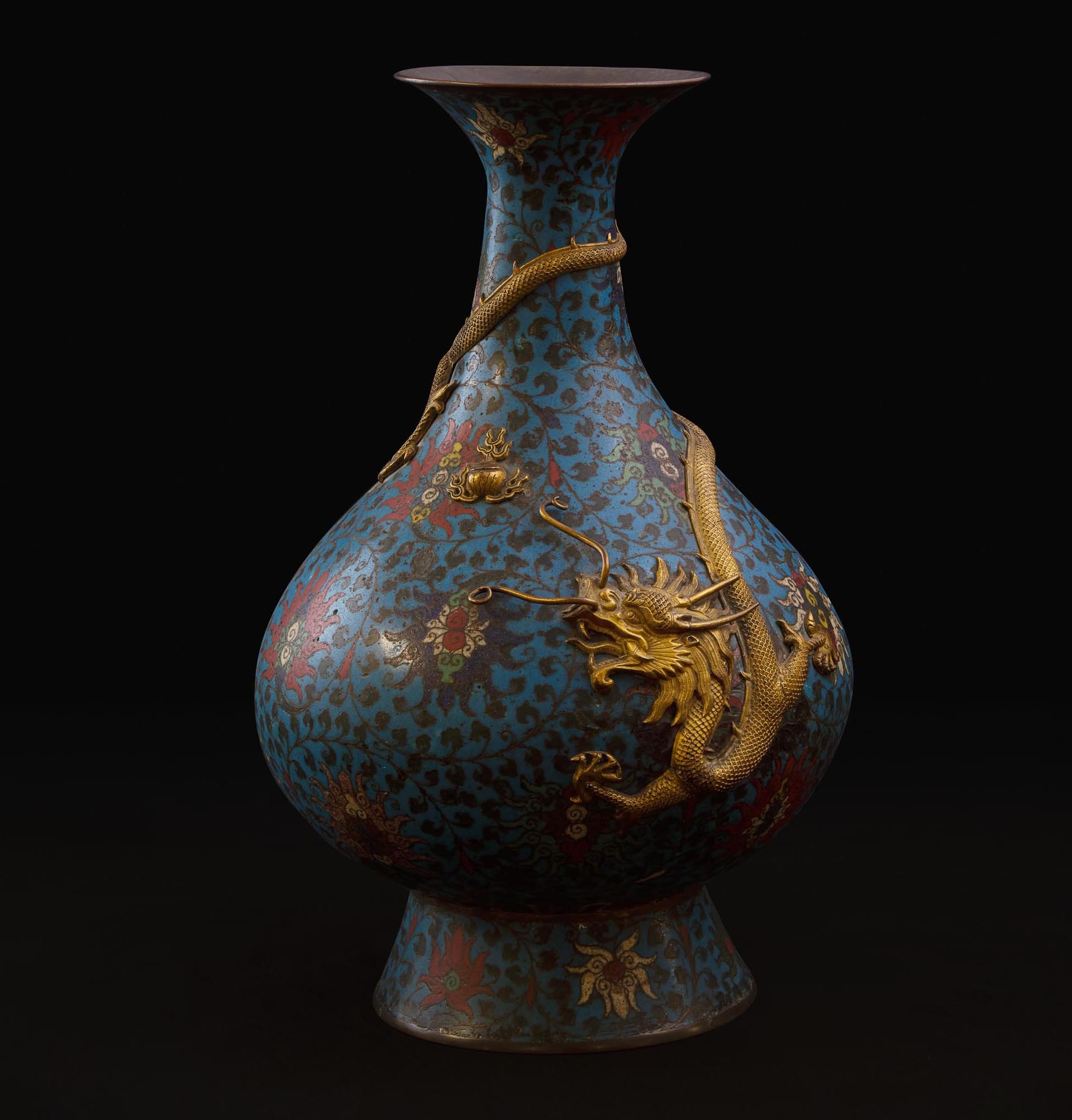 Cloisonné refers to the technique of applying metal wires—or “cloisons” (“partitions,” in French) to a metal body, filling the created spaces with powdered colored glass, and firing to create a colorful, durable surface. This technique flourished in Qing dynasty China, when cloisonné works were created for the court, temples, and wealthy patrons. This rare and impressive “Dragon” vase of “Yuhuchunping” pear-shaped form is encircled with an applied gilt-repoussé sinuous five-clawed dragon who chases a flaming jewel around the vase’s neck and shoulder, lending a sculptural, textural element to the vase’s elegant smoothness. 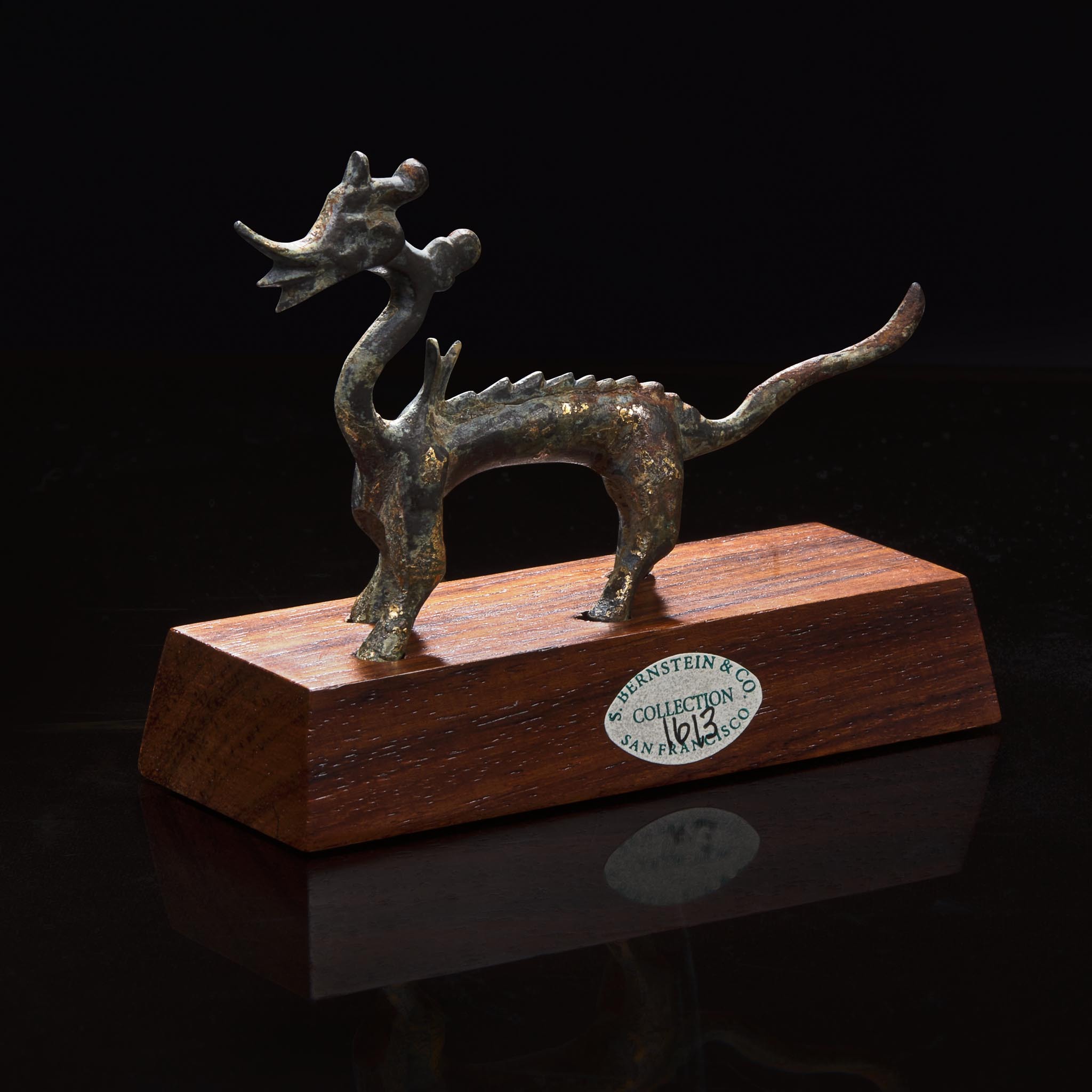 Front and center, this serpentine dragon relates to works dated from the Six dynasties (220–589) to the Tang Dynasty (618–906). The dragon’s long, slender legs and upturned nose reveal its origins from this period in Chinese history, when such small figures may have been used as dedicatory deposits. Steeped in this long history, the dragon’s charming size and sinuous form is sure to delight contemporary collectors too. 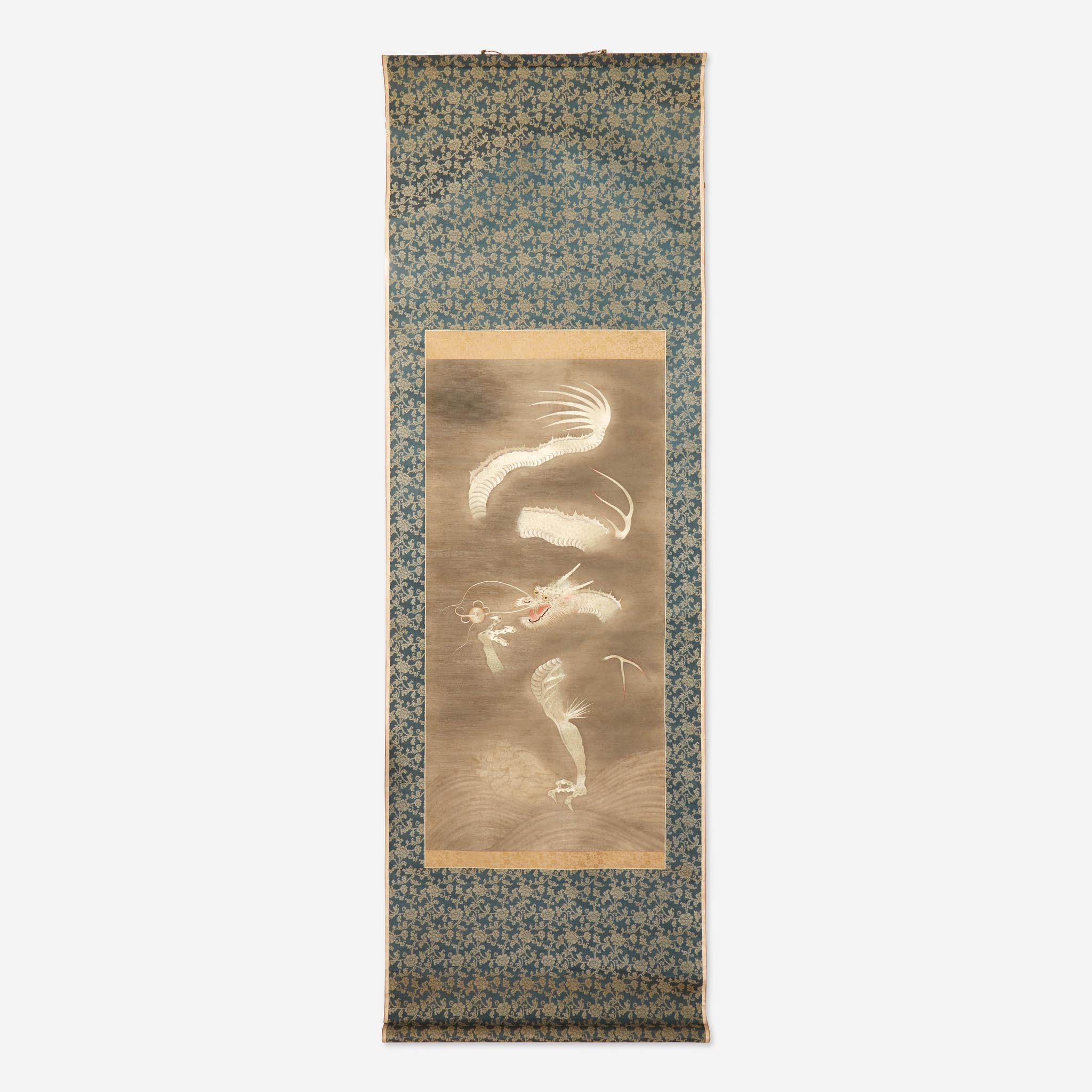 Though most dragon works in Asian Arts are of Chinese origin, this needlework scroll was made by a Japanese or Korean artisan in the 19th or early 20th century. Against a patterned floral scroll mount, this serpentine creature emerges from mist and waves rendered intricately in needlework. Despite its perhaps foreboding appearance, dragons are regarded as bearers of power, even good fortune; the flaming jewel it chases in the present work, a common theme, is also associated with wisdom, energy, and immortality. 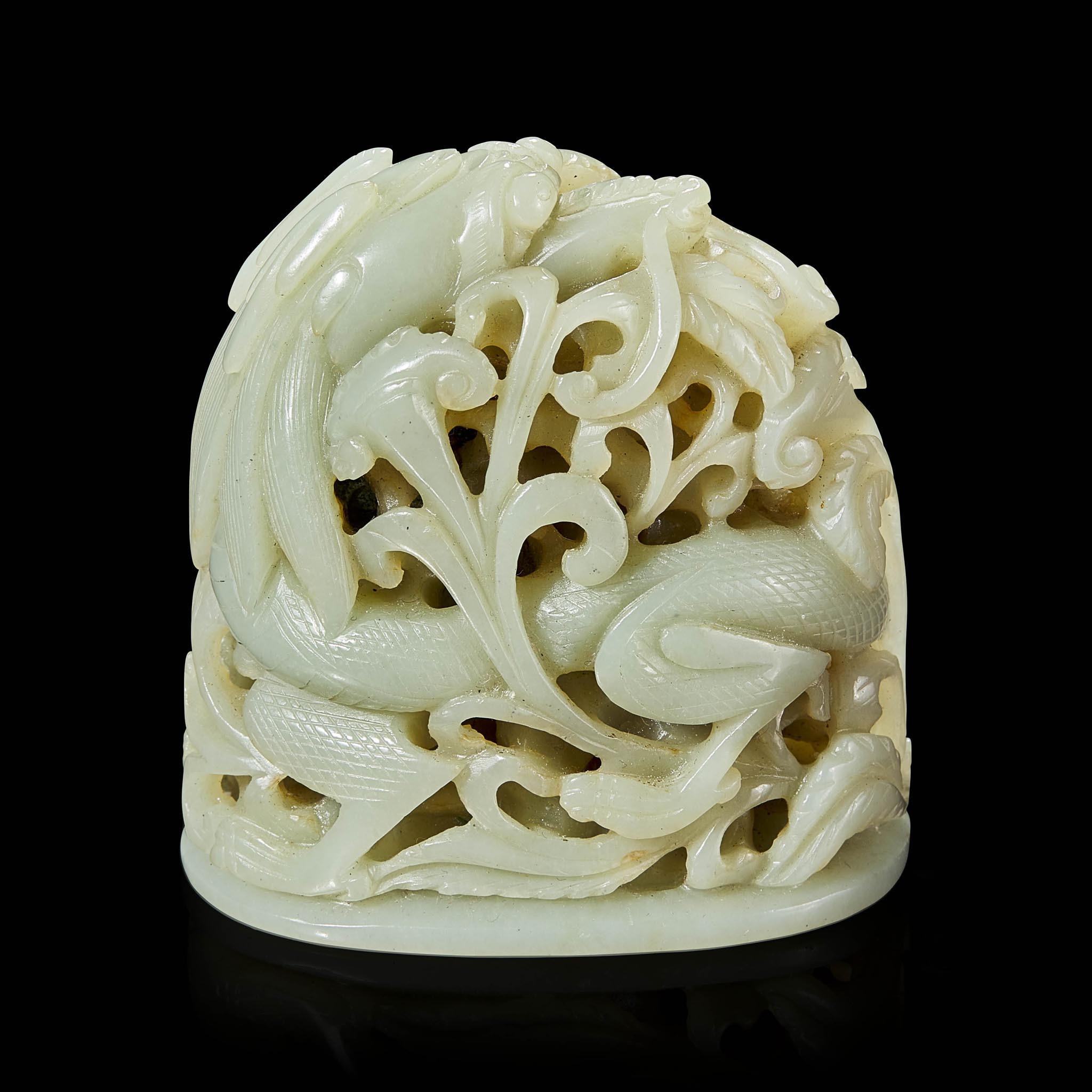 Chinese jade works come in a remarkable array of shapes, sizes, and jade varieties, but the cool pale green-yellow of celadon jade is particularly popular in the current market; at Freeman’s most recent Asian Arts sale, an important Imperial pale celadon-white jade seal achieved $378,000. The present intricately carved finial features a dense network of fungi and foliage, out of which emerges a twisting dragon. Due to the nature of jade carvings, this is one of the few works in which a dragon appears in the same color and form as its surroundings; here, the dragon is in harmonious interrelation with nature. 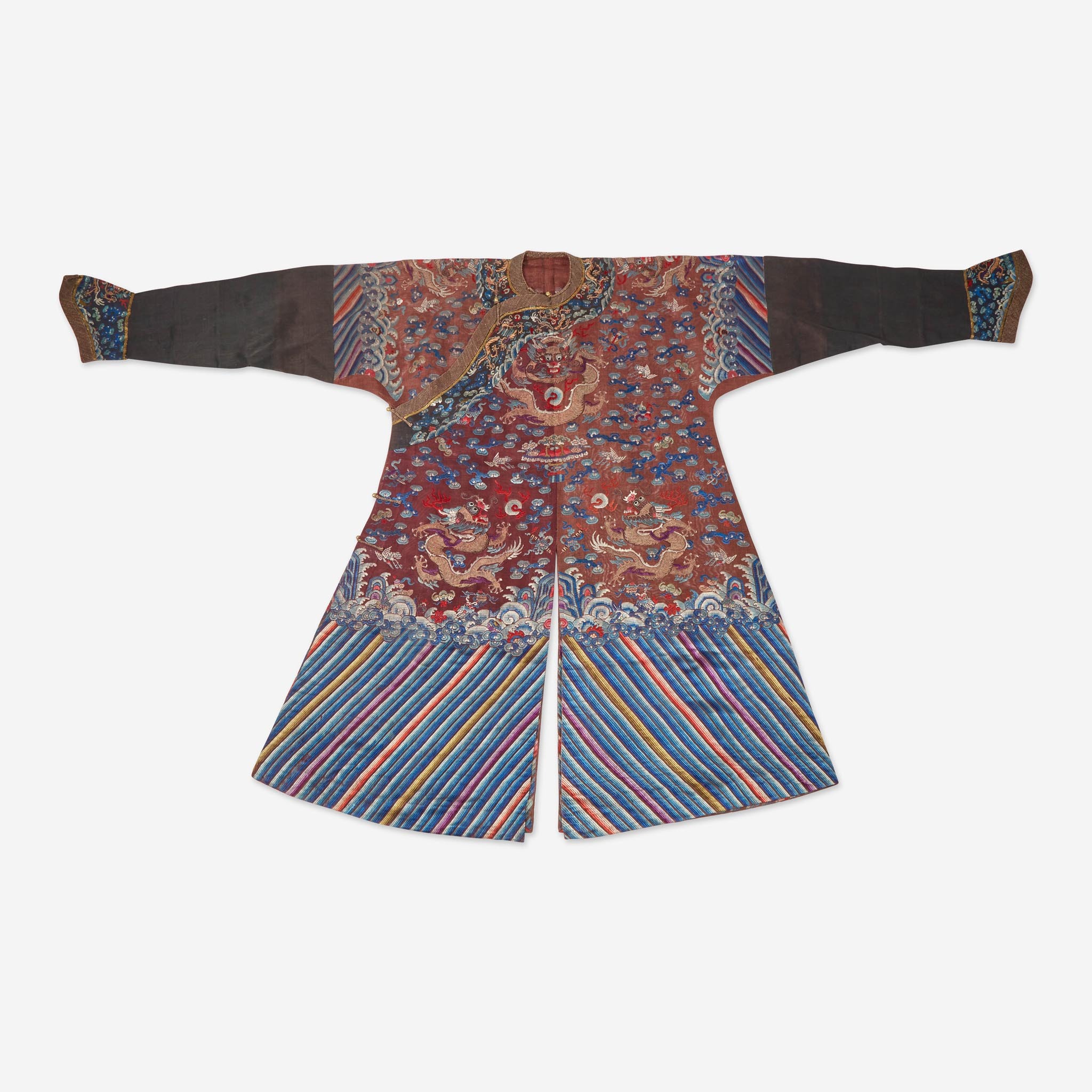 Of all the dragon-studded lots in Asian Arts, this robe is one of the few that can be worn. Its finely detailed silk embroidery includes nine sinuous dragons, which stand out against a sea of various auspicious Daoist and Buddhist symbols, from clouds and flames to bats and peaches. The dragons—prominently positioned across the robe—as well as the garment’s striking striped patterning, metallic thread, and propitious symbolism, make this robe a powerful garment indeed. 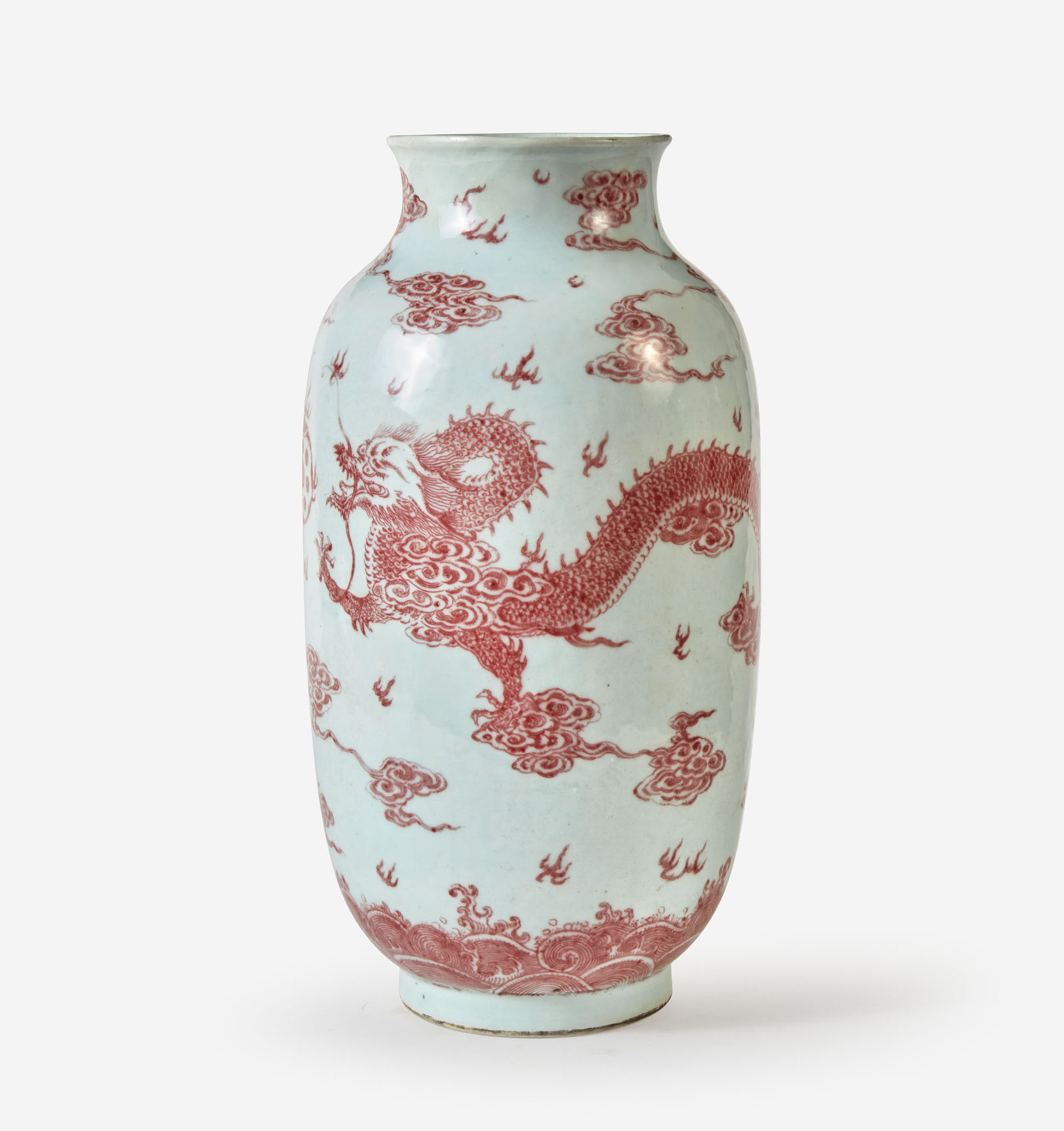 Freeman’s upcoming sale features a fine selection of Chinese porcelain, but perhaps none so striking as this lantern-form vase. The design showcases many themes we’ve already encountered: with rolling waves below and clouds overhead, the five-clawed dragon chases a flaming jewel. This captivating scene is rendered in a distinct copper-red in perfect harmony with the vase’s white porcelain body with pale blue-tinted transparent glaze. Remarkable in and of itself, this work is further distinguished through provenance: it was once held in the collection of Jean Lavigne, a Parisian fine art publisher best known for his work with Salvador Dali.

View the rest of our April 13 Asian Arts auction.