How Copyright Law is Catching Up with Jeff Koons

American Pop artist Jeff Koons often makes headlines for his oversized sculptures, made from stainless steel to look like shiny balloon animals; his most iconic work is a giant balloon form in the shape of a dog, and comes in an array of mirror-finish colors. His works command high prices at auction-in 2013, his "Balloon Dog (Orange)" sculpture sold for $58.4 million, which set an auction record at the time for the most expensive artwork by a living artist-and his sculptures appear in public and private institutions across the globe. Recently, a sculpture Koons proposed to honor victims of the 2015 and 2016 terror attacks in Paris, a hand clutching a bouquet of balloon tulips, was approved to be assembled in the gardens of the Petit Palais in the French capital.

His work, while lauded for being playful and a commentary on our material culture, is not without controversy. Some critics find his sculptures kitsch, crass even, though perhaps the most serious criticism that can now be leveled at Koons was handed down by the French legal system last week: plagiarist. 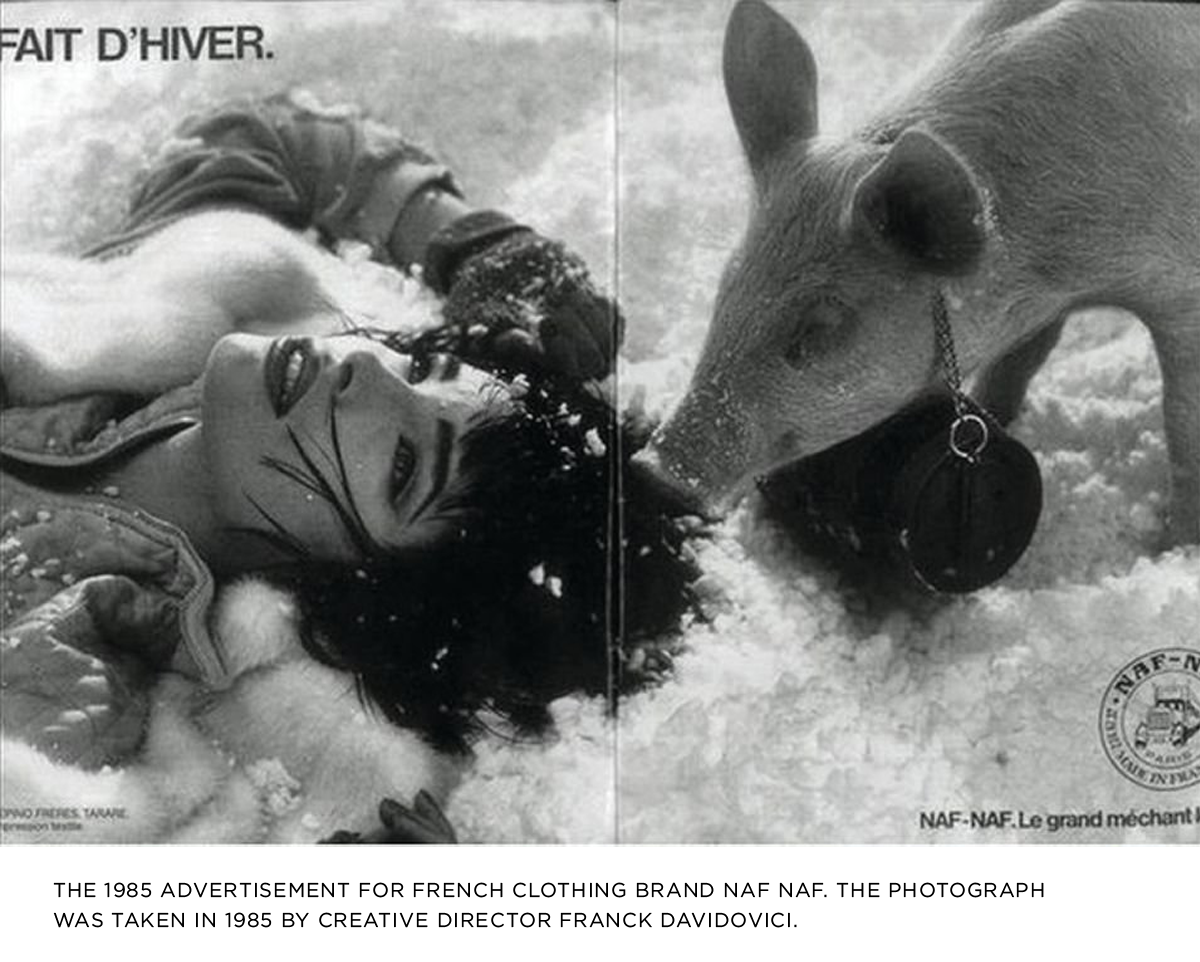 In a case that has played out over the last four years, the artist was accused by creative director Franck Davidovici of copying a photograph he took for French clothing brand Naf Naf, featuring a woman lying in the snow being nuzzled by a pig, and which appeared in a 1985 advertisement. In 1988, as part of his 'Banality' series, Koons created a sculpture of a woman, lying in the snow, with a pig nuzzling her hair. The position of the woman's hands were the same in the original advertisement photo, as was the small brandy cask worn around the pig's neck. The similarities did not end there. The raven-haired model in each bears the same expression, with a lock of hair placed in exactly the same spot against her cheek. Davidovici's photograph ran as a double-page spread with the text "Fait d'Hiver"; Koons' gave his artwork the same title.

The sculpture was purchased by the Prada Foundation in 2007 for more than $4 million, and was later exhibited at the 2011 Venice Biennale. Mr. Davidovici first saw the artwork in August of 2014, in the exhibition catalogue for a retrospective of the artist's work at the Centre Pompidou, the modern art museum in Paris, and sued for copyright infringement the following January. The case languished in the French court system until last week, when it was determined that Koons had indeed copied Davidovici's original photograph, thus infringing on his intellectual property and copyright. Koons had argued that his "Fait d'Hiver" was substantially different from Davidovicis-Koons added a wreath of flowers around the pig and two penguins standing on either side of it-that any similarities could be chalked up to his "artistic expression," and that it was a parody of the original, one of the legal allowances of fair use under copyright law. In their ruling, the French court rejected his argument, stated Koons' sculpture had the same "very recognizable staging" of the photograph, and ordered Koons to pay Davidovici nearly $170,000.

This was not the first time Koons was found to be on the wrong side of copyright law, and not even the first sculpture from his "Banality" show. Photographer Art Rogers sued him in 1989 over Koons' sculpture "String of Puppies," a polychrome statue featuring a woman and man sitting on a bench holding a line of eight blue puppies. The sculpture bore striking resemblance to Rogers' 1985 photograph of the same scene, titled "Puppies." Koons sold three copies of "String of Puppies" by the time Rogers filed suit for copyright infringement, against both the artist and his gallery, Sonnabend in New York. Koons again claimed his work was protected by the parody clause of fair use.

Incriminatingly, Koons had sent faxes to the team responsible for the construction of "String of Puppies," which included the instructions: "keep as per photo form of puppies...work must be just like photo." In 1990, the Federal District Court in Manhattan granted a summary judgment in favor of Rogers, and ordered Koons to pay damages of an undisclosed sum, and turn over all remaining proofs of the sculpture. He appealed the verdict the following year, though the appellate court upheld the District Court's ruling and disregarded Koons' assertion that "String of Puppies" was a parody of the original, writing: "It is not really the parody flag that appellants are flying under, but rather the flag of piracy."

Also from "Banality," Koons' "Wild Boy and Puppy" sculpture was found to have been an infringement of Jim Davis' lovable cartoon dog, Odie, from his Garfield comic strip. In their ruling in Davis' favor, that court referred to and relied on the precedent set by Rogers v. Koons. "At best," the court wrote, Koons' "Wild Boy" sculpture was, "a parody of society at large, rather than a parody of the copyrighted 'Odie' character." Koons was also sued over a sculpture he titled, "Pink Panther," which, as the rest of the sculptures in the show suggest, held remarkable similarities to a certain beloved magenta cartoon cat.

The most recent lawsuit comes thirty years after the initial gallery show of "Banality." Koons has also been embroiled in lawsuits involving artworks outside of that series. Aside from the original artist's having their copyright protected, perhaps the most meaningful outcome is that each case has helped reshape copyright law as it is applied to art.