Selling Your Asian Art at Auction

If you 're considering consigning your work of art for a future sale, referring to these guidelines will help inform your next steps, and whether consigning at auction is the right choice for your item.

Freeman's holds two Asian Arts auctions each year, scheduled to coincide with Asia Week in New York. The most recent sale, held in September, included nearly 650 lots of fine Chinese, Japanese, Burmese, Tibetan, and Korean decorative objects and works of art. When inviting and accepting consignments for these sales, our Asian Arts specialist and Department Head, Ben Farina, asks several important questions, which help him determine whether the piece is suitable for auction. If you're considering consigning your work of art for a future sale, referring to these guidelines will help inform your next steps, and whether consigning at auction is the right choice for your item.

Did you acquire the piece from a reputable dealer or auction house?
An item's provenance is helpful in establishing a history since the piece's creation. Provenance may include invoices from the purchase of the piece, or catalogues in which the work previously appeared, documentation regarding previous owners, dates of ownership, and how the work was transferred between those owners (either at auction or descent in the family through inheritance). Three Chinese Jian-type russet and black-glazed small teabowls had previously passed through Christie's in New York in September of 1995. They sold at Freeman's for $11,875, against an estimate of $2,000-3,000.

Has it been previously published or exhibited in a museum or gallery?
Just like acquiring the piece from a reputable dealer or auction house, a work of that has a documented history of being exhibited in a museum or gallery not only solidifies its provenance, it can also add value at auction. A Chinese Jizhou cut paper-resist "Blossoms" teabowl, and a Chinese Jizhou black-glazed pottery bowl with trailed decoration, both from the Southern Song Dynasty, were previously exhibited in the Morris Museum, in an exhibit titled "Harmony in Clay: the Elegance and Refinement of Song Ceramics."

Did you inherit the piece and is there a good story behind it?
Two gouaches by Indian painter Jamini Roy, "Hunters on Elephant," and "Two Elephants," included in the September 2017 auction fit this description to a tee. The parents of the owner who consigned it acquired both paintings directly from the artist, while living in Calcutta between 1962-1964. The previous owner also had personally met the artist.

A painting by Torao Sasaki, titled "Doubt the Fear," came from the collection of Dr. Jacob Thiessen, who acquired it directly from the artist, in the late 1980s/early 1990s. Dr. Thiessen met the artist while researching the effects of nuclear radiation. The artist, a Hiroshima native, created a series of paintings inspired by his work for the Atomic Bomb Casualty Commission (ABCC), established by the U.S. government to research the effects of radiation from atomic bomb survivors in Hiroshima and Nagasaki. The painting is much more personal, depicting three dogs in a studio, one of whom has gotten into the artist's paint tubes. 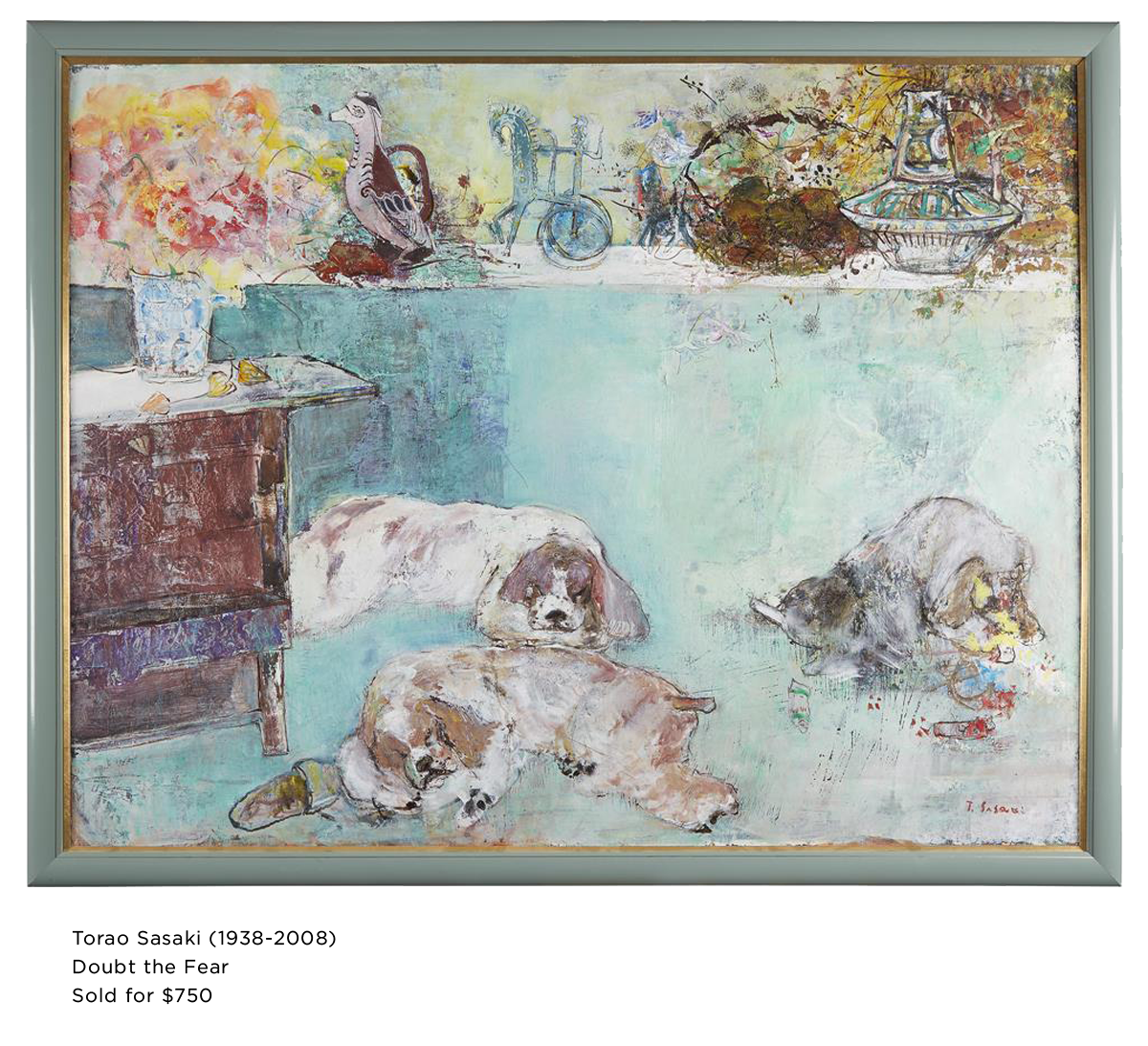 Are there any links to the Chinese imperial family or Chinese nobility?
In September 2017, a rare and impressive Chinese blue and white porcelain hexagonal vase sold for $143,750, more than three times its high estimate. The vase featured a Qianlong six-character mark and was of the period, making it likely to have connections to the Chinese imperial family. Examples of vases of this dramatic scale and decoration are rare. Given its probable connection and its inherent impressiveness, combined with the fact that it was discovered in a Philadelphia estate, it certainly aroused the admiration and competition of eager bidders.

Is the piece of exquisite quality?
While this may seem somewhat subjective, there are many objective qualifications that elevate a work of art or decorative object to one of exquisite quality. Is the piece a modern reproduction? Is it the finest example of the form? Is it cracked, damaged, or otherwise broken in some way? Has it been well cared for? All of these are considerations our specialist must review when accepting consignments.

Curious what your Asian works of art could bring at auction? The department is currently inviting consignments for its March 2019 auction.

Speak with a specialist today.