Get a specialist's perspective on our upcoming auction

Learn more about our Books and Manuscripts department with Darren Winston

How long have you been at Freeman’s, and where were you before?

I’ve been here just short of three years. Before that I was a rare bookseller for 24 years, so I was on the other side of the trade.

Why did you shift from bookseller to auction specialist?

Our Chairman, Alasdair Nichol, and I had known each other for 20 years. About three and a half years ago, I reached out to him to ask his opinion about a painting. He jokingly said, “Oh, I thought you were getting in touch to take over our Books department.” I’d been in the retail side for years and loved it; my shop was doing just fine and there was nothing wrong. When people ask now, I say I was airlifted out of my previous life. It was a fantastic opportunity that came seemingly out of nowhere.

What about auctioneering—actually being on the rostrum? When, and how, did that start?

I’m a musician, I play in bands, so I’m very used to being on stage. The process of becoming an auctioneer is very official; you’re vetted by the state, the FBI, and my colleague Ben Farina, who is fully licensed, is my sponsor. As a specialist, the client reaches out to you, you see them in their home, you go through their property, make choices, catalogue them, evaluate them, then get on the rostrum and sell them. Previously, I had to hand the ball off at the last moment. Now I can look the consignor in the eye and say, “I am going to sell this for you.” From the get-go, I’ve wanted to know my customers, be in their homes, help them find graduation gifts for their kids—I take all of that very seriously. That’s never changed, but now that I’m auctioneering, it’s operating at a different level.

What’s your personal specialty or passion within the department?

I’m a generalist because that’s a necessity in the rare books world, but at the end of the day my heart is with fine bindings and 20th-century literature. My colleague Colin Foley does the majority of the cataloguing, but occasionally I’ll say, “I’ll do this one,” just for fun. I spend so much time in meetings, with clients, and doing proposals that I don’t get to do as much of the nuts and bolts, and that’s the most fun—the point of discovery, and then sharing that discovery.

What’s your approach to consigning in the Books and Manuscripts department?

When consigning, your first job is to say to a client, “you’re showing me what you think you’re showing me; I’m going to share with you what I think you’re really showing me.” For example, in our upcoming sale, there’s a fantastic three-volume set of a Ulysses S. Grant biography. It was consigned to us earlier this year, and the people who consigned it were very diligent and had done their homework. We were able to go back and give them so much more detail about the object after we went down our own series of rabbit holes. We were able to find a letter from 130 years ago where the author of the work referred to this very copy, now on my desk, 130 years later. Discovering and sharing those circles never gets old. Telling a consignor that they own a piece of history that can be traced back to the desk of a president, that before my visit was maybe sitting on a shelf at home next to their high school yearbook never gets old.

What’s your favorite part about the department?

You can’t go to a museum and say, “do you mind if I just put my hand on the canvas?” But with books in particular, you can handle the merchandise. A bronze sculpture can be damaged, but it’s difficult to destroy. You can destroy a book in a second; just drop it in a bucket of water or get it near a flame. So the fact that something survives for one, two, three, five hundred years, made of paper and leather, is astonishing to me. My job is like being a chaperone—I’m shepherding this thing to the next part of its journey. I like being able to tell a buyer or a seller, “you’re now part of the life of this thing. It might’ve been around for 300 years before you, but now you’re part of its story.” That’s amazing.

The upcoming auction contains a lot of political material. Have you seen increased interest in presidential material in particular?

Presidential material is a popular category, and it always has been. It seems particularly popular at Freeman’s, I think both because of our 216-year heritage—we started only 16 years after George Washington first took office—and because we’re Philadelphia’s auction house. Part of why I think people gravitate toward this material is because owning a piece of the legacy of political figures is like owning a piece of American history itself. The Mary Todd Lincoln letter in the upcoming auction, for instance—she needed to get a message to her driver. She wrote it out, handed it to the telegraph operator who sent it, message received, off it goes—but that piece of paper wasn’t tossed out, it was kept. So now there’s a story in this tiny scrap of paper; it’s almost like a poem. When you own something like that, you’re attached to the American experience. 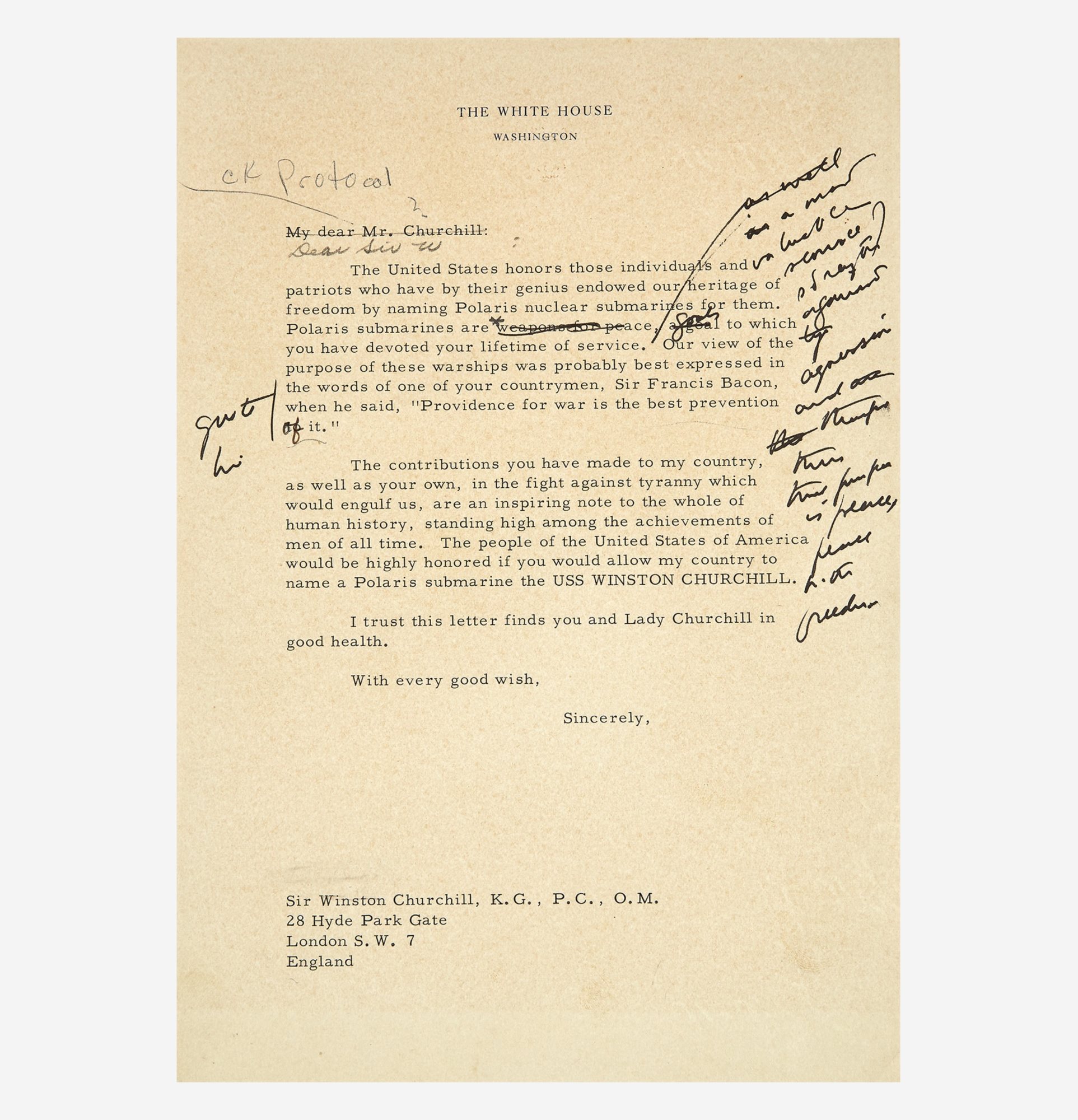 We also have a typed letter from John F. Kennedy to Winston Churchill with JFK’s emendations in pen. You’ve done that—I’ve done that—you print something out and make notes on the side. But this is the president, one of the most famous in the world. Buyers know that every single item like that is unique. Books aren’t unique by their nature, but autographs and documents are. Even if you write a letter twice, each copy is unique because there are differences in how you wrote them out. A lot of the appeal of this material is its ordinariness; somebody wrote a note to their friend, but that somebody is Abraham Lincoln. It’s the ordinary detritus of extraordinary people.

How do you see Freeman’s role in handling historical Pennsylvania material?

Freeman’s takes their Pennsylvania and Philadelphia heritage very seriously. The Declaration of Independence was written just down the road, thirty years before Freeman’s was founded. Freeman’s started before the War of 1812! As a family and a company, Freeman’s has seen so much of America’s history from their doorstep.

We don’t just handle local material; we promote it. It’s like an unwritten part of our mission. We wear the Philadelphia badge brightly, strongly, and proudly. Having dealt in almost none of this material before coming to Freeman’s, I realize that’s part of my remit now—I’m a cheerleader for—and now partial-custodian of—Pennsylvania material. I take that part of my job really seriously.

If you were to bid on any item in the upcoming auction, which would it be?

From the time that I was a very small child, I loved stuff. I still love stuff. At some point, though, the personal value of owning a thing got exchanged for the value of passing that thing along. So instead of going to a flea market and falling in love with this painted chair, I would see the painted chair and think, “that would be so cool to sell to someone else.” I didn’t have to own it anymore. 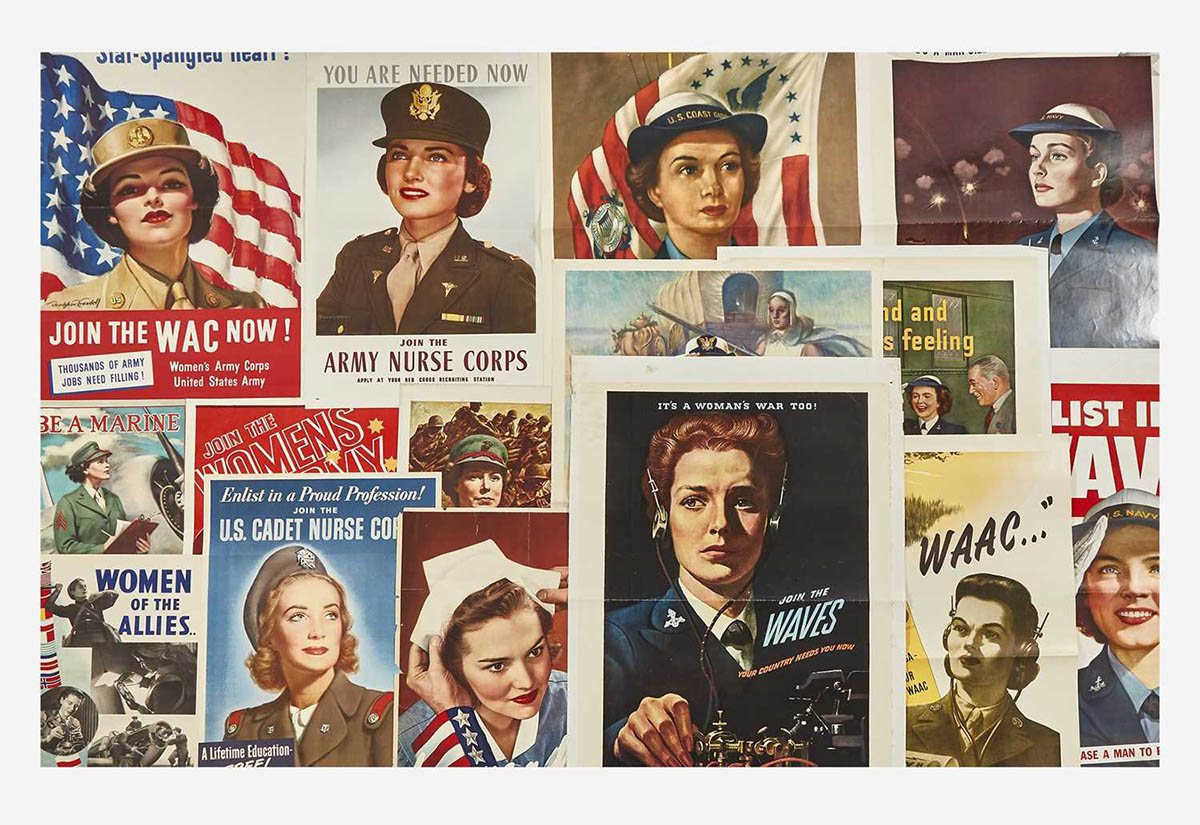 That being said, there’s something that moves me in every auction. In the upcoming sale, there’s one poster that I cannot stop looking at and thinking about. It speaks to me in a language I can’t explain. I don’t know if the woman in the poster reminds me of my wife, my mother, a movie star, some ideal I know doesn’t exist…but I’m glad I can’t fully explain it. It’s similar to walking through a museum and being surprised by a painting you never thought you’d look at because you went in there looking for something else. We got 598 posters in that particular consignment and there are some awesome ones, but that’s the one I’d take home.

Back to an earlier question: one of the things I love most about selling books is that a book is an object, a source of entertainment, a canvas for design—but at the end of the day it’s a story or a poem or a song. Whether there are 130 or 500 lots in our sale, every one of those items has a story and a history behind it. There are so many layers to these objects.

Browse the upcoming auction and register to bid on the items in this collection, or join us online to watch the auction live on May 20.