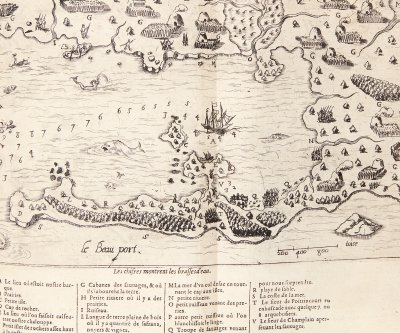 On March 15, 1603, French explorer and cartographer Samuel de Champlain set off on the Bonne Renommée for what would be the first of his 21 voyages to North America. Ten years later, in 1613, Champlain would publish one of the most important books on North America, and a milestone during the age of exploration, Les Voyages du Sieur de Champlain, his second published book relating to his expeditions in New France. A narrative account of his expeditions in the years 1604, 1610, 1611, and 1613, it richly documents his travels in the St. Lawrence River Valley; south along the Atlantic coast into New England and Cape Cod (producing the earliest and most accurate maps of the area); his travels into the interior of Canada, finding the source of the Richelieu River and the lake that would bear his name; the establishment of the first permanent French settlement at Quebec; the mapping of the Great Lakes region; and detailed ethnographic accounts of the native populations, without whose help these expeditions would not have been possible. These accomplishments and expeditions would go on to firmly establish the French as a colonizing force in the region, and cement Champlain’s reputation as one of the greatest explorers.

The eight engraved maps featured in this volume are some of the most important and accurate maps of the region produced in the 17th century, and would greatly influence cartographic efforts for years to come. Included is the important map Carte geographique de la Nouelle franse en sonaray meridien which is noteworthy for its inclusion of Henry Hudson's and other English discoveries to the north, then only recently discovered. It is also the first to accurately include the entire record of exploration of the region in a single map. Handsomely bound in late 19th century full red morocco by English binder W. Pratt.

Champlain was the first cartographer to explore the new continent with a scientific gaze, and earned him the title "Father of New France".

Books and Manuscripts
Auction February 18, 10AM