All acquired directly from the artist's daughter, Rhodia Dufet-Bourdelle, the bronzes offer a glimpse into the genius of one of the most talented pupils of Auguste Rodin. They also speak for the long-lasting fascination that their owner, Mr. Robert Becker, had for Beethoven. "We could not be more excited to foster such a unique event" says chairman Alasdair Nichol. "What better way to celebrate Beethoven's legacy than through the sculptures of Antoine Bourdelle - one of the artists who was the most influenced by the music, and overall persona, of the composer."

With estimates ranging from $4,000 to $80,000, the bronzes showcase the evolution of Bourdelle's style. The sale indeed mixes early examples of his work that show the strong influence of his master Rodin, with more mature compositions, which reveal a simplification (and almost abstraction) of forms and shapes. 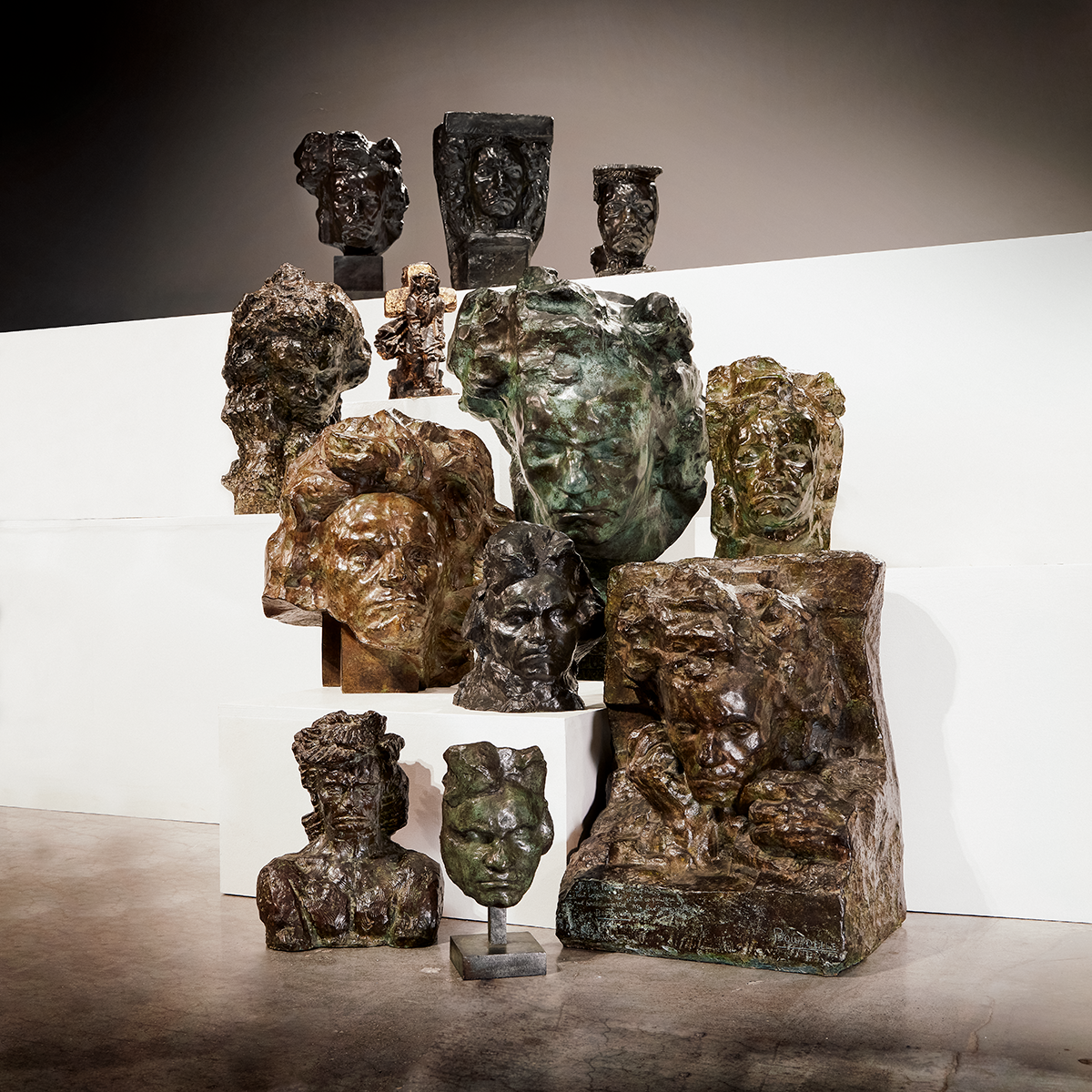 Robert Becker's collection of bronzes was an outgrowth of his great love for Beethoven's music, which truly began in the early 1970s, when he founded the Beethoven Society with the aim of sponsoring monthly concerts at the Lincoln Center in New York City. The collection itself began around the same time, after a visit to the Bourdelle Studio and Museum in Paris, where Mr. Becker and his wife met the daughter of Antoine Bourdelle, who would then sell them one or two bronzes every year. Since then, the bronzes have been kept at Mr. and Mrs. Becker's private New York apartment. The October sale will be their first-ever appearance at auction, having never been on the market or exhibited before.

Among them is Beethoven à Deux Mains, one of the anticipated highlights of the sale (Lot 9, $80,000-120,000). Executed in 1908, some twenty years after Bourdelle first started to portray Beethoven, the bronze shows the composer's anguished head emerging from a block of stone. Tormented and gaunt, Beethoven embodies the image of the true Romantic genius; a mysterious deity "whose veil has never been lifted by mankind" according to the carved inscription at the base of the sculpture. Seven other bronze casts of this work were made, as well as one granite version, which is in the collection of the Musée Bourdelle in Paris.

A Trio of Expressive Heads

The over-life-sized disembodied Beethoven dit Métropolitain of 1902 (Lot 7, $20,000-30,000) will be another highlight of the sale. Standing an impressive forty inches high, the bronze is one of Bourdelle's most accomplished portraits of Beethoven, and the first model ever purchased by the French government. It is characteristic of Bourdelle's dramatizing use of pitted and puffed surfaces, which creates a ragged exterior that conveys the tumult of the composer's inner life. The artist's self-identification with his idol can also be seen through Beethoven, La Joue Appuyée sur une Main (Lot 1, $20,000-30,000) and Beethoven aux Grands Cheveux (Lot 5, $20,000-30,000). In each work, Beethoven's infamous wild, curly hair plays an important part, channeling the vitality of his music. While the former example suggests the soft, rounded melody of his concertos for piano, the latter echoes the terrible roar associated with his first movement. By doing so, Bourdelle not only contributed to Beethoven's mythology, but also set out to prove that music could be sculpted. 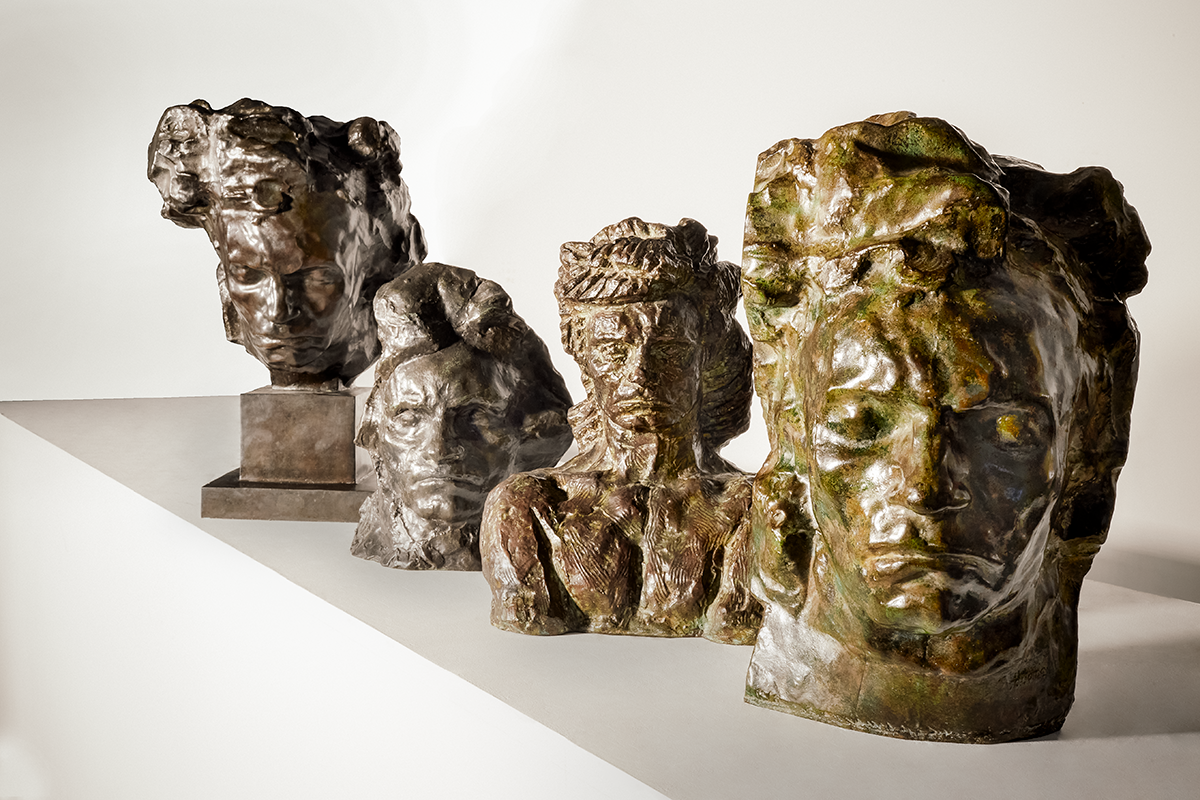 The rest of the sale features several studies for larger compositions, as well as a number of masks inspired by Beethoven's original death mask, the closed eyes and crisped mouth seemingly (and paradoxically) evoking an intense innerlife (see Lot 2, $6,000-10,000; Lot 3, $4,000-6,000; Lot 4 $10,000-15,000). Also of note is La Pathétique (Lot 12, $5,000-8,000), the very last bronze that Bourdelle ever made of Beethoven in 1929, the year of his death. Set against an impressive cross (which bears signs of past gilding), Beethoven is represented in full-length, haggard and melancholic. His hair undone, his top hat rolled up at his feet, the Christ-like figure appears to be waiting for his final hour, leaving behind him a legacy as raw and expressive as the clay Bourdelle kneaded when he shaped his alter ego's features.