Freeman's is excited to bring important works by Wharton Esherick from the Hedgerow Theatre Collection to auction as a part of The Pennsylvania Sale on October 28. Building on Freeman 's long-term success selling items from its native state, The Pennsylvania Sale is a comprehensive tribute to the entire region—its history, people, and the art and objects they made, used, and cherished.

Wharton Esherick (1887-1970), heralded as the "Dean of American Craftsman" and a vanguard of America's Studio Furniture Movement, began working in wood at the close of the Arts & Crafts Movement. Although embracing the ideology that valued the hand-made over the industrially produced, he broke with the movement's more traditional edicts and aesthetics, creating sculptural, cutting-edge furniture forms. Esherick was introduced to the Hedgerow Theatre in nearby Rose Valley, Pennsylvania and to its founding Artistic Director Jasper Deeter (1893-1972) in 1923. The men shared both artistic ambition and a rebellious spirit. Esherick began designing pieces of furniture for Hedgerow Theatre in exchange for his daughter's acting lessons. Initially involved in set, costume and lighting design, Esherick went on to create woodblock posters for various productions and furniture for both the Theatre and nearby Hedgerow House, which served as the home to Theatre company members. Over the years, the Theatre's Green Room housed several works of sculpture by Esherick, operating as an unofficial gallery and exhibition space for the artist. Much of the furniture created by Esherick has remained in use at Hedgerow Theatre since its creation.

Wharton Esherick was born in 1887 in what is now considered West Philadelphia. From a young age, Esherick was interested in drawing and he studied the commercial arts of lithography, illustration, and drawing at the Philadelphia Museum School of Industrial Arts. From 1908 to 1911, Esherick studied painting at the Pennsylvania Academy of Fine Arts. Unable to reconcile his interest in impressionism with the Academy's more traditional aesthetic, he left months before graduating. After leaving PAFA, he made scant money as an illustrator, working for local publications and the Victor Talking Machine Company in Camden, New Jersey, the corporation that had recently released the Victrola. Wharton and his wife Letty moved to an old farmhouse on a hill in Paoli, Pennsylvania in the winter of 1913. Deeply entrenched in the writings of the transcendentalists, the Esherick home Sunekrest and his hand-built studio would become the artist's Walden Pond. In the 1920s, Esherick began experimenting with wood, crafting frames for his impressionist paintings and his experimentation with flat-relief carving expanded into the creation of woodblocks and woodblock printing. The medium of woodblock helped Esherick develop the prismatic, angular style he would then transfer to furniture forms. The sculptural forms which followed have been famously likened to the classic German expressionist film The Cabinet of Dr. Caligari (1920). Between carving his woodblocks, Esherick created small wooden sculptures and in 1923, was inspired by a visit to the nearby Rose Valley Arts and Crafts community and began carving the surfaces of antique furniture for use in his home. 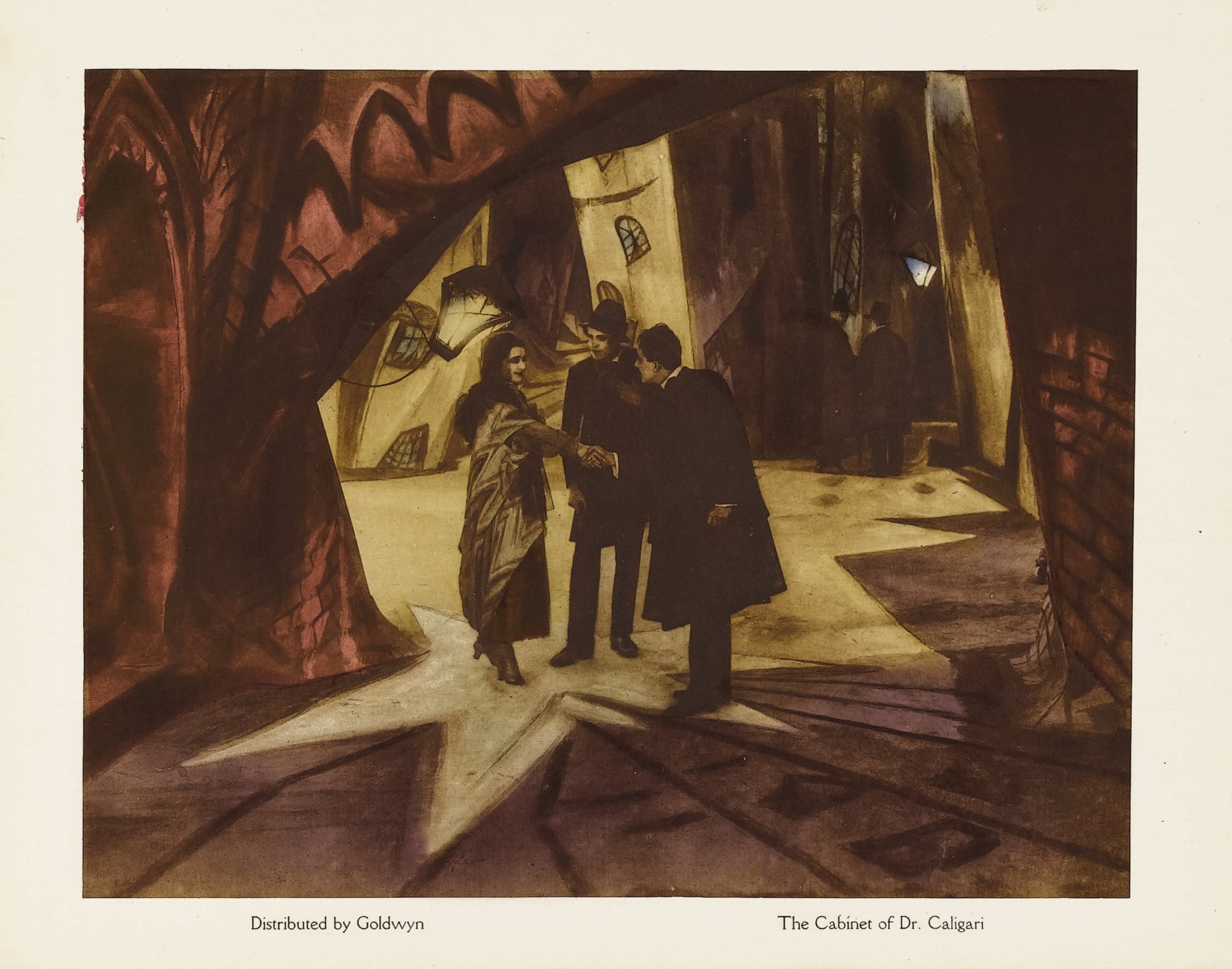 The Rose Valley community was created in 1901 by the Philadelphia architect William Price around a dilapidated, pre-Civil War mill town. Having learned about William Morris, John Ruskin, and the Arts and Crafts movement during his travels to England, Price set out to experiment with his own utopian, single-tax community in response to the growing industrialization of urban America. The Rose Valley Arts and Crafts community was centered around Guild Hall, a converted grist mill, a space created by Price for musical and theatrical productions. Like many Arts and Crafts communities, Price's experiment ultimately failed and the Rose Valley Association dissolved nine years after its incorporation in 1910. As the story goes, Jasper Deeter was on his way from Swarthmore to visit his sister Ruth Deeter, a physician in Moylan. It was there he found his sister rehearsing a play in the old mill fashioned by William Price into a center for the performing arts in Rose Valley. Jasper Deeter had gained notoriety as an actor and member of the Provincetown Players in Greenwich Village, New York. However, having grown discontent with the commercialism of the theatre scene in New York, found the abandoned mill in Rose Valley a perfect place to house a repertory theatre under his direction. Deeter believed theatre could access and express truths of the human condition. The Hedgerow Theatre which followed was effectively a second attempt at Price's experiment. At Hedgerow you were not only trained as an actor, but to create sets and costumes, taught to cook and wash clothing, valet cars, and complete yard work. Deeter produced the challenging work of contemporary modernist writers and playwrights such as Eugene O'Neill, George Bernard Shaw, Bertolt Brecht, and Countee Cullen, among many others. Around this theater a larger artistic community formed, made up of writers, actors, painters, sculptors, and photographers, to whom Hedgerow's success and artistic spirit was indebted. Esherick's wife Letty was friendly with Deeter's sister Ruth, and she introduced the men to one another in 1923. Esherick wrote of Deeter: "I love what he is doing and what he is going to do, that is why I give, give all within my power to help." The whole Esherick family became intimately involved with the theater. Letty taught dance and weaving at the nearby Hedgerow School. Esherick's daughters Mary and Ruth spent many years at the theatre, Mary as an actor and Ruth as a lighting technician, among other roles. Wharton famously created set designs, worked on general carpentry around the theater, populated its Green Room with his work, and at least once, acted in one of the company's plays.

Wharton Esherick's multi-layered relationship with Hedgerow lasted a lifetime. It provided him inspiration and a testing-ground of ideas. In the theatre's balcony, he spent countless hours sketching actors as they moved across the stage or as they held a sensitive pose. Some of these figures Esherick rendered in wood as sculpture. His set designs for Hedgerow productions show the first instances of forms he would seek to realize as furniture. Hedgerow was perhaps the single most important influence on Esherick's evolution as an artist. At Hedgerow Theatre he first met Theodore Dreiser, the author of Sister Carrie and An American Tragedy, and with whom he maintained a lifelong friendship. Sherwood Anderson, a close friend of Jean Toomer (who Esherick came to know through Toomer's wife, Marjorie Content, a modernist photographer) secure a spot at Hedgerow for his short story cycle Winesburg, Ohio, to be adapted to the stage. Anderson's work was a large influence on Jean Toomer's masterful high modernist short story cycle Cane, published the same year Hedgerow was founded. Esherick not only helped Anderson, but also worked with Toomer to illustrate the publication from his experimental artist colony in Doylestown, Pennsylvania. Jasper Deeter's theater undoubtedly became a center for modernist social and intellectual circles. His work helped define this landscape redolent with the potency of artistic truth, and in turn, Jasper Deeter's theater was one of the most formative spaces for the development of Wharton Esherick's artistry.

Leading the auction is the iconic "Thunder Table" ($150,000-250,000), carved by Esherick in 1929 in celebration of the success of the Theatre's production of Thunder on the Left in which his daughter Mary appeared.

The "Thunder Table" has been on display in the Theatre's Green Room for many years before which it had been in use by decades of actors and visitors.

Additional works on offer include a Trestle Table ($10,000-15,000) that purportedly came from Esherick's own collection; and eight "Hammer Handle" chairs ($5,000-7,000, each). The chairs, assembled in part from found hammer handles, are among the most iconic and significant of his creations; examples are presently in the collections of the Museum of Fine Arts, Houston; the Wharton Esherick Museum in Chester County, Pennsylvania; The Museum of Art & Design in New York, New York; and the Longhouse Reserve in Long Island, New York, among others.