What is Illustration Art?

From works by Norman Rockwell and N.C. Wyeth to Jessie Willcox Smith and Sarah Stilwell Weber, Illustration Art is in strong market demand, captivating the imaginations of contemporary audiences just as strongly as it did more than a century ago. Part of the fabric of American art and culture, works by these artists are often instantly recognizable—but what exactly constitutes Illustration Art, and how did it achieve such popularity as a form among American audiences?

In what is now considered “The Golden Age of Illustration”—dating from the mid-19th to the early 20th century—artists found new, dynamic modes of exhibition. Moving out of galleries, museums, and private collections and into the lives of everyday Americans, paintings and works on paper by Illustration Artists graced the covers of magazines and periodicals, advertisements, and books in a flurry of prolific creation.

Never before had art been so democratized; the movement often blurred the boundaries between the realms of “fine” and “popular” art. Renowned artists like Winslow Homer indeed took up both forms, painting dramatic scenes in oil as well as working as a commercial illustrator for Harper’s Weekly for eighteen years. Childe Hassam, whose painting Mrs. Hassam in a Garden leads Freeman’s June 5 American Art and Pennsylvania Impressionists auction (Lot 60; estimate: $2,000,000-3,000,000), had his illustrations published in Scribner’s and Harper’s at the same time he was making a name for himself as a leading American Impressionist. In this way, artists changed the shape of art history through both critical acclaim and by gracing the pages of wildly popular periodicals. 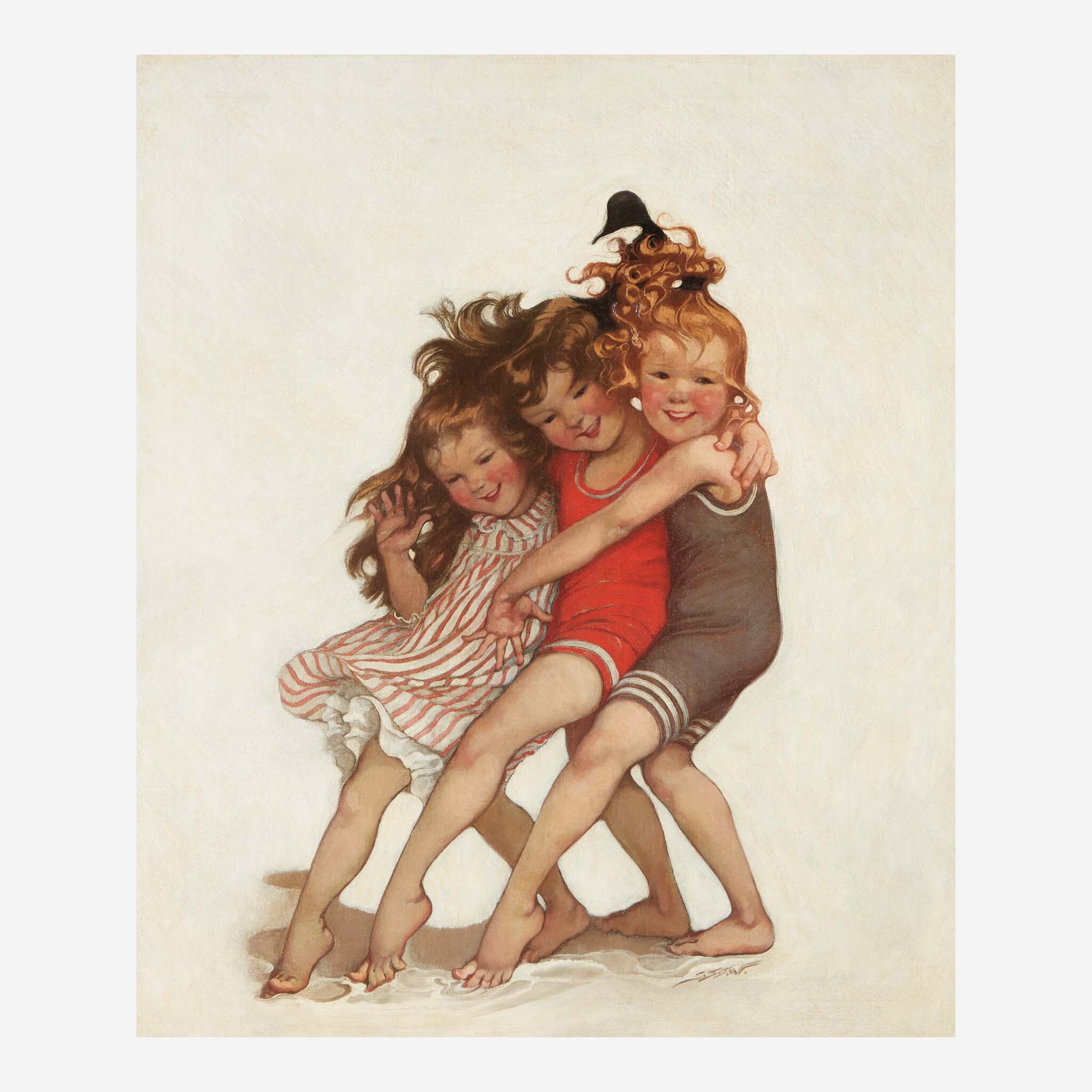 One such periodical was the Saturday Evening Post, an illustrated Philadelphia-based weekly that boasted a circulation of three million copies a year in the early 20th century. The Post was famous for, among other things, launching the career of Norman Rockwell, who painted more than 300 covers for the magazine. Freeman’s June 5 sale features Sarah S. Stilwell Weber’s Three of Us (Saturday Evening Post Cover) (Lot 58; estimate: $30,000-50,000), a joyful illustration that ran in a summer 1917 issue of the Post and marks a classic example of the important Philadelphia illustrator’s style.

Rockwell’s work is also featured in Freeman’s June 5 sale; his 1975 Character Study, a charismatic oil on canvas, is an excellent example of the artist’s masterful study of faces, grasp of color, and attention to detail (Lot 56; estimate: $30,000-50,000). Rockwell was so widely regarded as a master portraitist that by the mid-20th century he was traveling nationally and internationally for appointments; he made portraits of celebrities and five US presidents. Character Study offers a glimpse into the iconic artist’s process, revealing that even his studies were remarkably detailed.

Rockwell’s work for the Post in particular is one of the best-known hallmarks of the Golden Age of Illustration: his work was widely adored for its depiction of everyday life. “I was showing the America I knew and observed to others who might not have noticed,” said Rockwell. “And perhaps, therefore, this is one function of the illustrator. He can show what has become so familiar that it is no longer noticed. The illustrator thus becomes a chronicler of his time.” 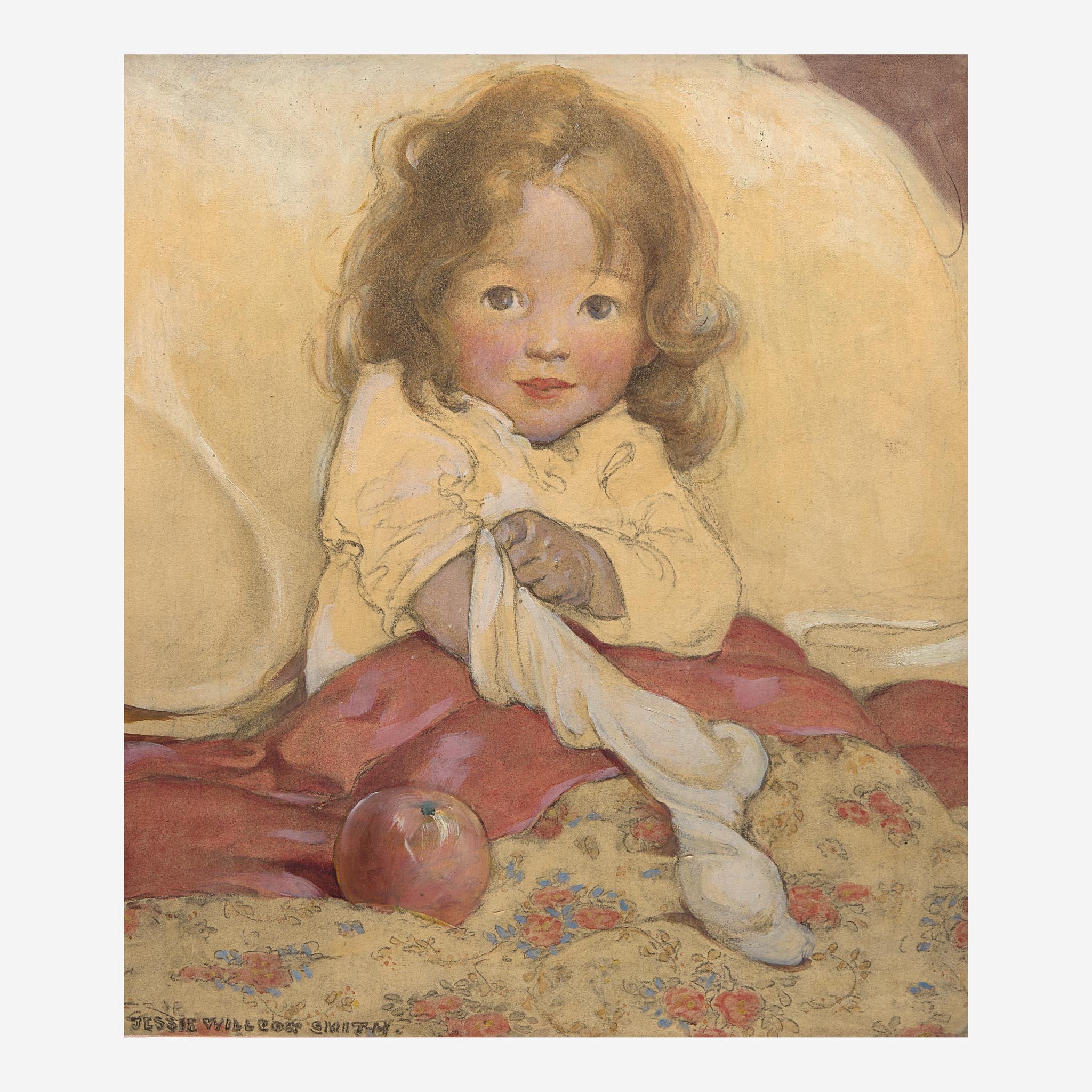 Another chronicler of her time was the esteemed Philadelphia illustrator Jessie Willcox Smith, whose charming portrait of a blushing child, Christmas Morning, is on offer in American Art and Pennsylvania Impressionists at a pre-sale estimate of $30,000-50,000 (Lot 59). Smith, who attended what is now Moore College of Art and Design, as well as the Pennsylvania Academy of the Fine Arts, blazed a trail as one of the preeminent female illustrators of her time.

By turns dreamlike and ominous, Smith’s illustrations also graced the covers and pages of such classic American publications as Harper’s, Good Housekeeping, and Collier’s, as well as the covers of dozens of books, including Louisa May Alcott’s Little Women. Smith’s work put childlike wonder front and center, often picturing children playing with one another or held in a mother’s embrace. The success Smith enjoyed in her lifetime highlighted another aspect of Illustration Art: its place as an outlet for women who wished to pursue a career, rather than exclusively a life of motherhood and homemaking as laid out for them in the late 19th and early 20th centuries. Smith joined other pioneering women illustrators—Violet Oakley and Jennie Augusta Brownscombe among them—in creating a new life for themselves, propelled forward by formidable talent.

View the rest of our June 5 American Art and Pennsylvania Impressionists auction.