The lawsuit that opened a host of legal questions with wide-ranging implications, most prominently: who really owns graffiti?

Earlier in July, a graffiti artist found himself embroiled in a lawsuit with car manufacturer Cadillac in Federal District Court in Los Angeles. At first glance, the words 'graffiti artist' and 'lawsuit' carry certain expectations as to the nature of the case, and you would be forgiven for making any sweeping assumptions. However, in this particular instance, the graffiti was legal, and the artist behind it is suing for a breach of his copyright.

In 2014, Detroit businessman Dan Gilbert commissioned Swiss graffiti artist Adrian Falkner-known as Smash 137-to paint a mural on one of his parking garages. Far from being an average street tagger, a rogue kid with a can of spray paint, Falkner's artwork has appeared in galleries around the world, and has earned critical acclaim. Gilbert's parking garage is a 10-story structure in downtown Detroit, named 'the Z.' In addition to its obvious function, the garage is also something of a gallery for public art. More than 20 other graffiti artists had left their mark on the building, though Gilbert gave Falkner pride of place: the outdoor elevator tower on the garage's top level. The results were striking. Falkner's bright, frenetic creation is a mix of colors and shapes, in the artist's iconic style. The mural spreads visually from the 90 degree angle of the two main walls, in a shock of pink, which is mimicked in the elevator bank inside the building, visible through glass doors.

In 2016, car giant Cadillac hired an freelance photographer, Alex Bernstein, to photograph several of their vehicles as part of a new campaign. One shot "The Art of the Drive" featured a large black SUV parked directly next to Falkner's mural, atop the Z garage. Conspicuously missing from the shot-which was shared widely across Cadillac's social media channels-was Falkner's signature. Conspicuously missing from any of the brand's promotion was Falkner's approval.

So in January of 2018, Falkner sued car manufacturer GM-the parent company of Cadillac-as well as the photographer they had hired, for unauthorized use of his copyrighted artwork. (The photographer is based in Los Angeles, which explains the jurisdiction of the case.) Falkner's suit alleges that GM purposely hid his signature by photographing the car next to the elevator shed head on, violating the Digital Millennium Copyright Act for "the falsification, removal, or alteration of copyright management information." He is also seeking recompense for damages to his reputation; as an artist, Falkner had "carefully and selectively approached any association with corporate culture and mass-market consumerism." 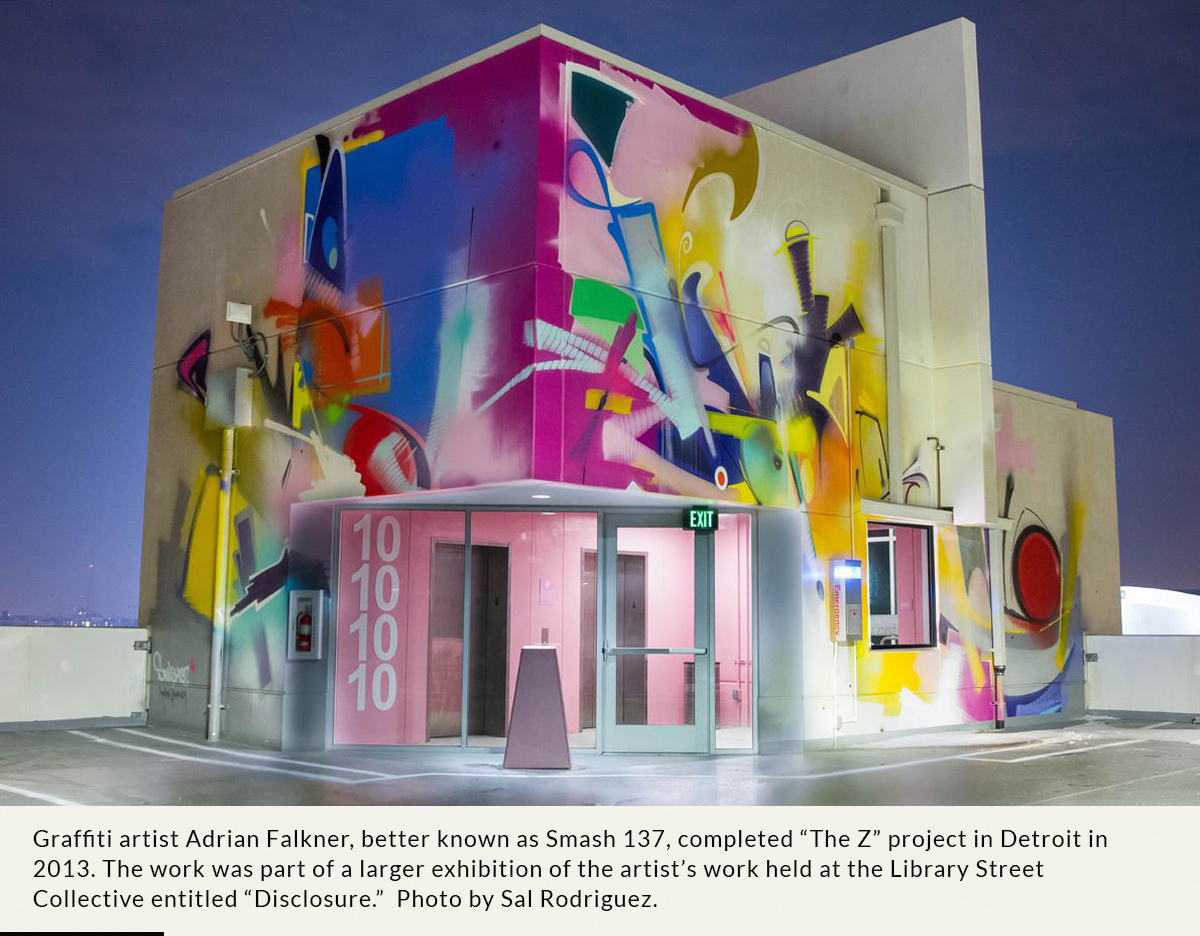 In June, GM filed a motion for summary judgment in response, hinging their argument on the 'pictorial representation' exemption of Architectural Works Copyright Protection Act (AWCPA) enacted in 1990, which states:

17 U.S. Code § 120 - Scope of exclusive rights in architectural works
(a)Pictorial Representations Permitted.The copyright in an architectural work that has been constructed does not include the right to prevent the making, distributing, or public display of pictures, paintings, photographs, or other pictorial representations of the work, if the building in which the work is embodied is located in or ordinarily visible from a public place.

“Essentially, GM is arguing that because Falkner's mural appears on a building-in this case, a parking garage-it is allowed to be reproduced because it is 'visible from a public place.'”

Essentially, GM is arguing that because Falkner's mural appears on a building-in this case, a parking garage-it is allowed to be reproduced because it is "visible from a public place." This is the same statute that allows for buildings like the Washington Monument or the Space Needle in Seattle to be used in advertising without monetary compensation; they are public, architectural structures.

Falkner and his lawyer lambasted the motion, and the notion. From court documents, they are arguing that Falkner's mural "was conceived of after the parking structure was built, has no relationship to the architecture, and plays no functional role," which they are hoping negates GMs defense.

The lawsuit opens a whole host of legal questions with wide-ranging implications, most prominent among them: who really owns graffiti? Is an average parking garage really an "architectural work" in the same class as the Empire State Building? Can an artist legally protect their intellectual property if it is on a copyright exempt structure? The granular details are important here; Falkner's mural was legally applied to the building, unlike most graffiti. If the artwork were in a museum, appropriate credit and compensation would be due to the artist of the work represented. An organization called the Artists Rights Society handles usage and permissions of reproductions of copyrighted works of art.

"Nearly all street art and outdoor murals are placed on buildings. If courts were to accept General Motors' reasoning, copyright protection for millions of artworks would be lost and it would leave a devastating impact on artists' rights," Falkner's attorney, Jeff Gluck said. "The moral implications are impossible to ignore...If GM's view prevailed, all graffiti art that exists on a building-that is, most graffiti art-would suddenly be unprotected by copyright."

These questions will be answered on August 27, when Judge Stephen V. Wilson of the federal district court for the Central District of California will hear arguments from GMs summary motion.