Why the Still Life Still Matters

The term still life may evoke, for many, the place and time from which the painting tradition as we know it today emerged: the Netherlands in the 17th century, when there was an outpouring of depictions of riches—oysters, goblets, fruit of all kinds—spread out across extravagant table settings.

These “golden age” painters set the stage for centuries of exploration of and experimentation with a form that continues to enthrall audiences and collectors. Freeman’s June 5 American Art and Pennsylvania Impressionists auction features more than a dozen still life works that offer a portal into the world of 19th- and 20th-century American artists.

As a form, the still life tells a story that goes much deeper than the individual objects on display. In 17th-century Netherlands, this narrative—told through the emergence of vanitas paintings—was one of the Anglo-Dutch Wars, which brought widespread unrest to the region. Still-life painters, in turn, took this dark vision of society to the canvas, rendering scenes populated by skulls and dying flowers alongside opulent instruments, jewels, and housewares. Such paintings served to moralize about the fleeting nature of life, the destructive nature of vanity, and the need to repent in the here and now. 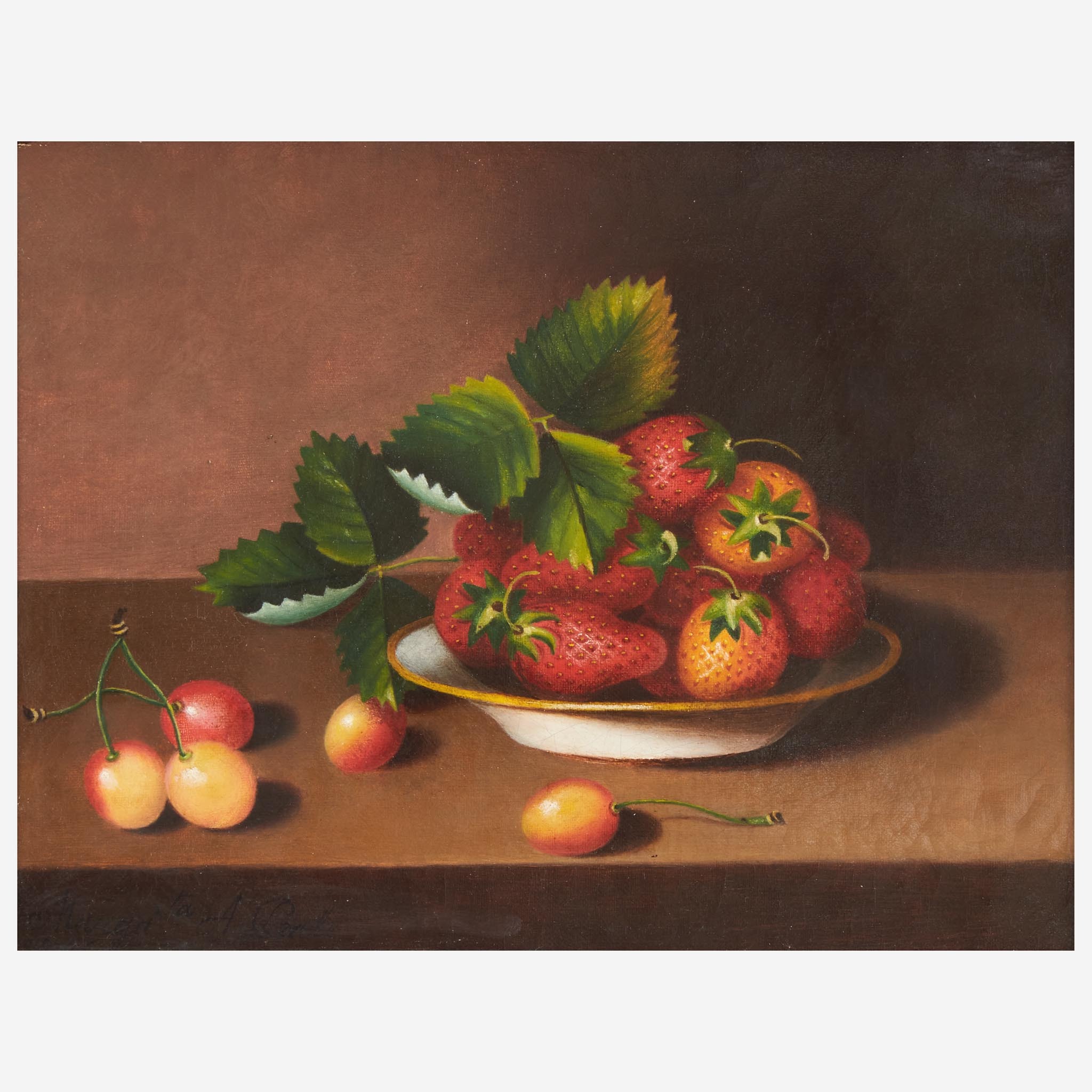 While 19th-century artists like Margaretta Angelica Peale were deeply influenced by the legacy of both vanitas paintings and the Flemish Old Masters, their work struck a decidedly different tone. Peale’s Still Life with Strawberries in a Plate with Cherries on Tabletop (Lot 1; estimate: $25,000-40,000) is richly hued as well as bright, even cheerful, showcasing two early-summer fruits at the height of their ripeness. Painted in 1865, the same year the American Civil War finally came to an end, Peale’s still life celebrates simple pleasures and hints at brighter days ahead. 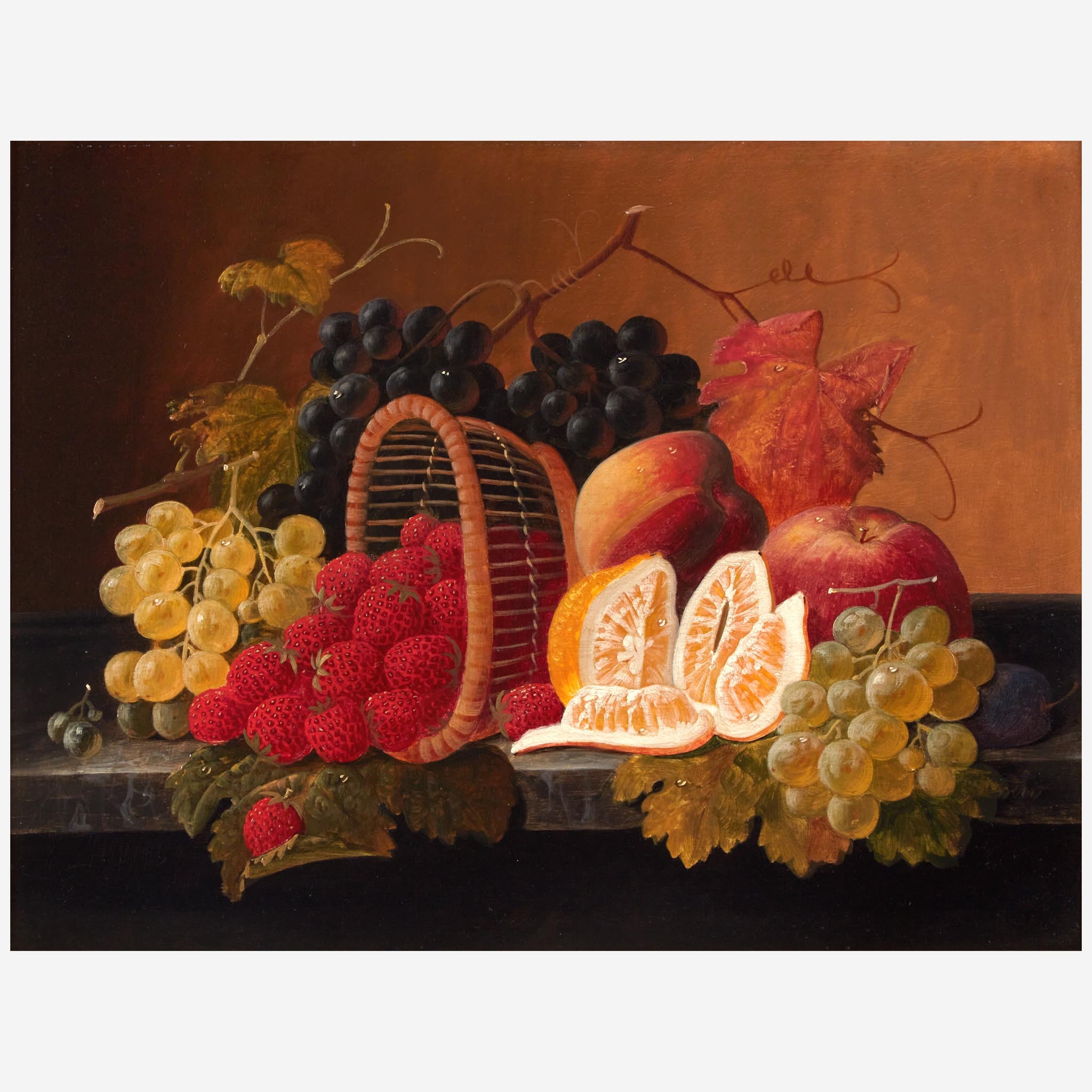 Severin Roesen, a contemporary of Peale, is renowned for his still life works featuring fruit and flowers, with compositions so abundant as to border on excess. Roesen also worked in the tradition set forth by Netherlandish golden age painters; his Still Life with Fruit and Overturned Basket on a Marble Ledge (Lot 13; estimate: $10,000-15,000) is one of the artist’s more earthly compositions, featuring a bright orange citrus fruit pulled into pieces, framed by peaches, berries, and grapes. 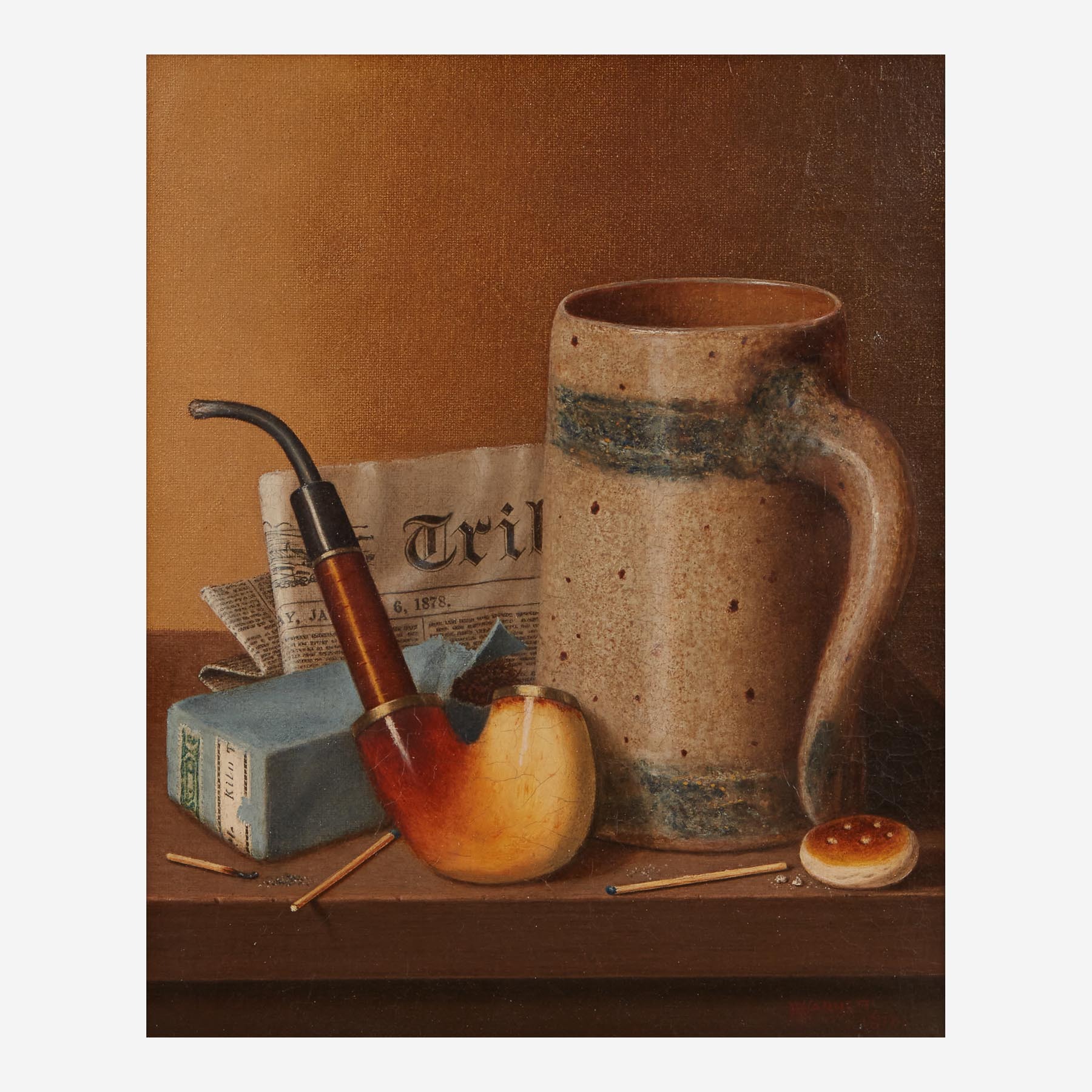 Eschewing flowers, fruits, and extravagant objects for plain, everyday items, William Michael Harnett produced a series of celebrated still life works in the 1880s in which a folded-up newspaper often appeared in the background. One such work, Still Life with New York Tribune, Beer Stein, and Tobacco (Lot 17; estimate: $40,000-60,000), shows the nearly microscopic detail Harnett was able to produce through his masterful brushwork, and, through objects like the Tribune, brings the external world onto the still-life canvas. For Harnett, the still life was initially a practical choice as well as an artistic one: unable to afford live models, he turned to the objects close at hand instead. 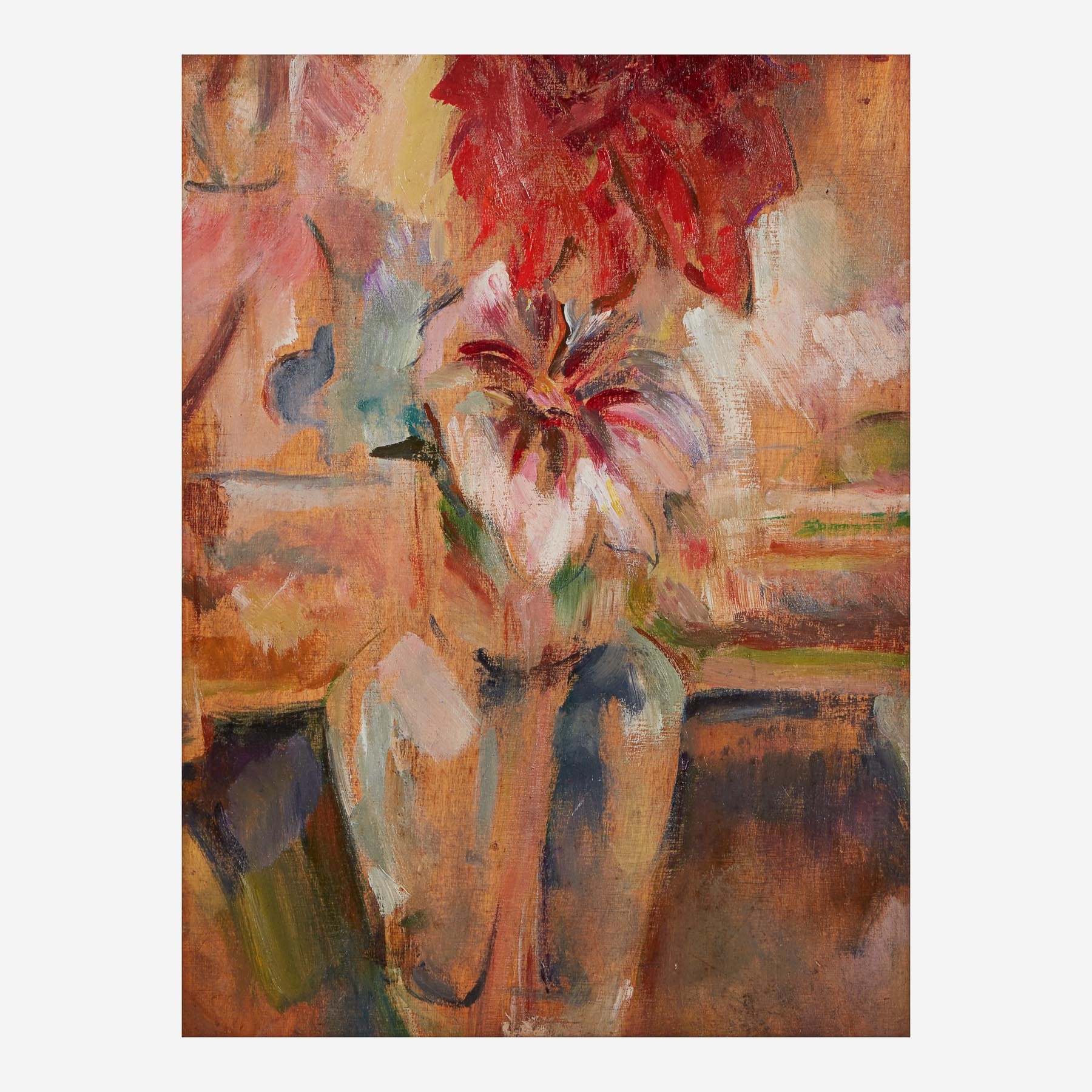 In stark contrast to the meticulous, highly detailed brushwork of Peale, Roesen, and Harnett, one still life by esteemed Philadelphia colorist Arthur Beecher Carles, Still Life with Flowers in a Vase (Lot 79; estimate: $4,000-6,000), takes a more abstract, free-flowing approach to the form. One of the only still-life canvases in American Art and Pennsylvania Impressionists to be executed in the 20th century rather than the 19th, Still Life with Flowers in a Vase shows the clear influence of such contemporaries as Pablo Picasso and Henri Matisse. 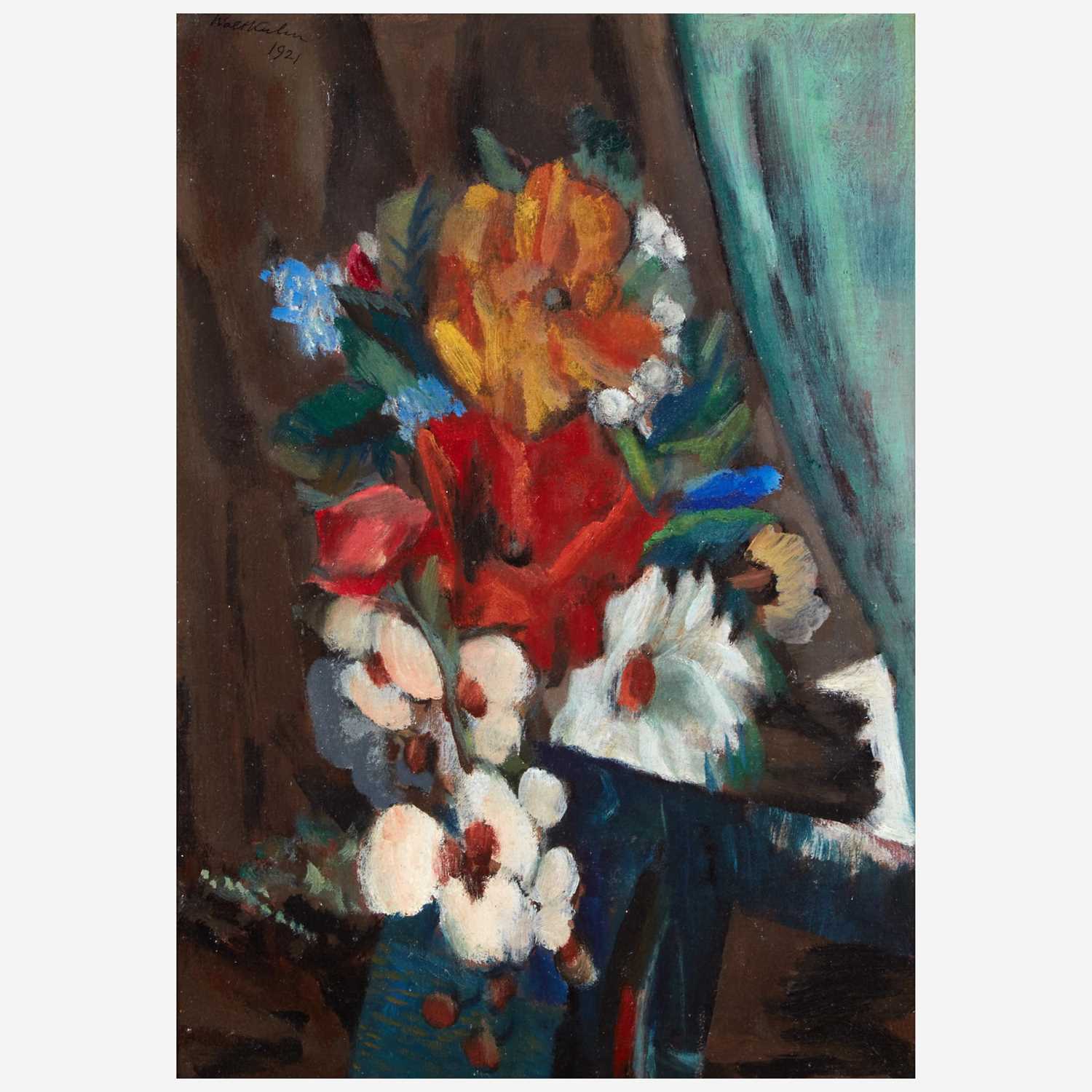 Carles is often considered a prescient figure in the history of art; his work in many ways foreshadowed movements like Abstract Expressionism. Contemporaries like Walt Kuhn, a Modernist painter best-known for his stark, emotional portraits of performers, also found room for growth within the still life; his Flowerpiece likewise brings a more gestural quality to the form (Lot 75; estimate: $10,000-15,000). Works like Carles’s and Kuhn’s form a bridge between 19th-century techniques and 20th-century experimentation.

View the rest of our June 5 American Art and Pennsylvania Impressionists auction.