What was it about these frosty conditions that so enchanted the Impressionists who lived and worked along the Delaware River?

A common thread among Pennsylvania Impressionists during winter was capturing scenes of their beloved colony settled along the Delaware River. What was it about these frosty conditions that so enchanted the Impressionists who lived and worked in these quaint hamlets?

Following the lead of Claude Monet, Pennsylvania painters chose to work en plein air to accurately recreate landscapes. French painters had been painting outdoors since the 1840s, and many Pennsylvania Impressionists picked up the habit during their years of study in France. Winter was the best season to observe and capture the changing effects of light on the snow-blanketed countryside. Here artists braved the elements, donning heavy coats and gloves while working with their easels in the snow. The December 9 auction of American Art & Pennsylvania Impressionists offers several striking examples, executed by some of the prominent names in the School.

Fern Isabel Coppedge is considered one of the most significant female artists of the Pennsylvania Impressionist movement. She is most well known for her bright, warm-hued wintry scenes, usually set in Bucks County, along the Delaware River. Like many other Impressionists of her time, she was committed to painting year round outside, and frequently braved the elements in a bearskin coat to capture the subtle effects of changing light, a technique at which she particularly excelled.

Lot 119, "Creek Bridge Snow" (estimate: $100,000-150,000) depicts the small town of Carversville, which is currently protected by an Historic District Ordinance preventing its population from growing too large or being developed with new homes and businesses. Pictured on an impressively scaled canvas is the Brook at Carversville, a site Coppedge painted numerous times, like Edward Redfield and Daniel Garber. Here, the artist again demonstrates her love for bold colors. She captures the gentle turquoise flow of the Delaware River, which borders bright houses on the river's banks; all covered with blotches of deep yellow and shimmering reds. 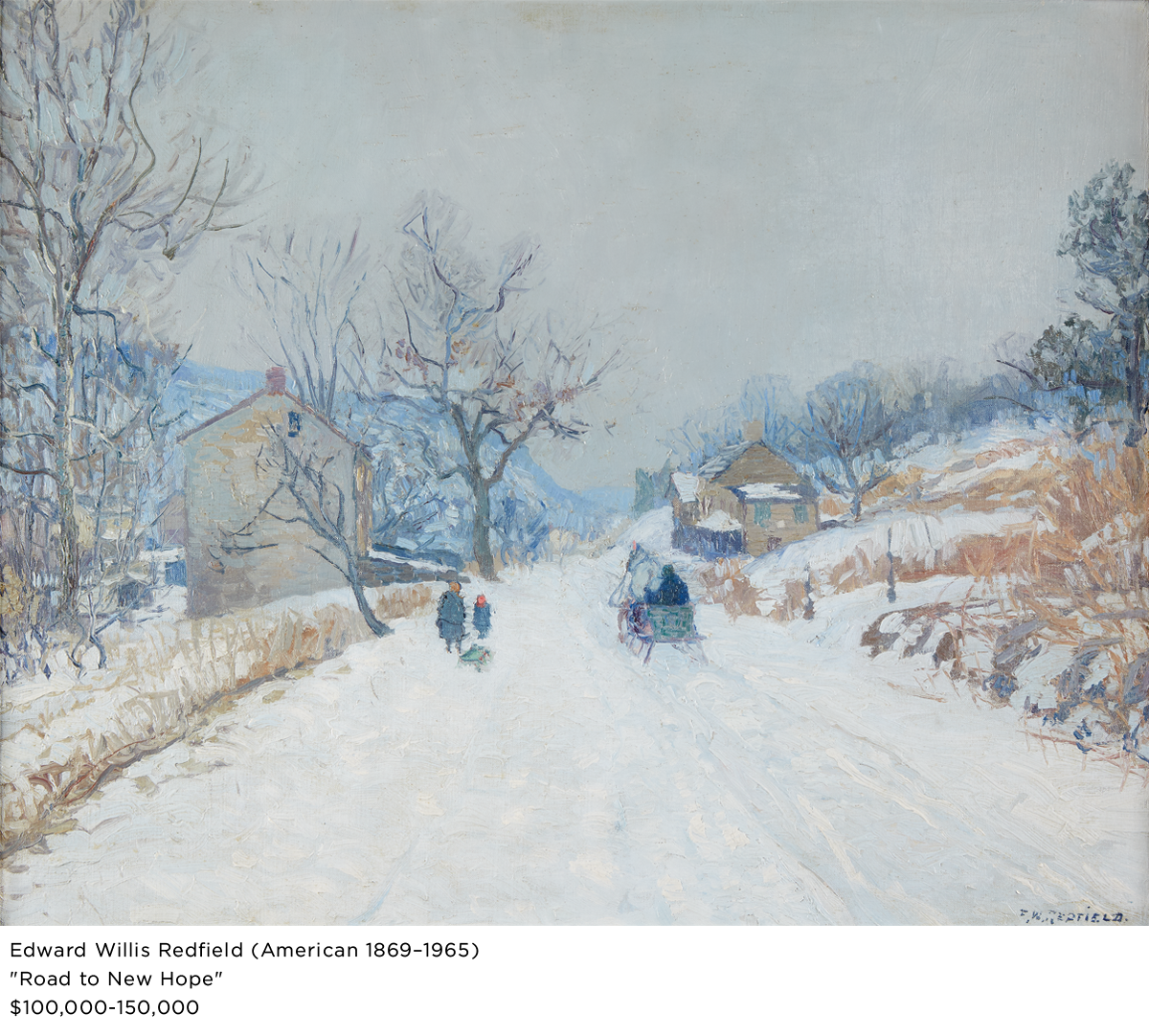 Edward Willis Redfield built his reputation through powerful landscape paintings, which he almost exclusively executed en plein air. Well-versed in large-scale winter scenes, he often revisited this subject throughout his career and paid great attention to light and color to capture the beauty and the subtleties of the snow-covered Pennsylvania countryside. In 1898, the Redfield family purchased a farm in Center Bridge, Pennsylvania, allowing the artist to study from unique viewpoints.

Lot 130, "Road to New Hope" (estimate: $100,000-150,000) displays Redfield's natural ability to capture the frozen landscape, with two groups of figures traversing the snow-covered path. Redfield's habit of lashing a canvas to trees during a storm, or standing knee-deep in snow while he completed a painting became legendary. Many artists copied him later on, such as the renowned artist Walter Elmer Schofield. 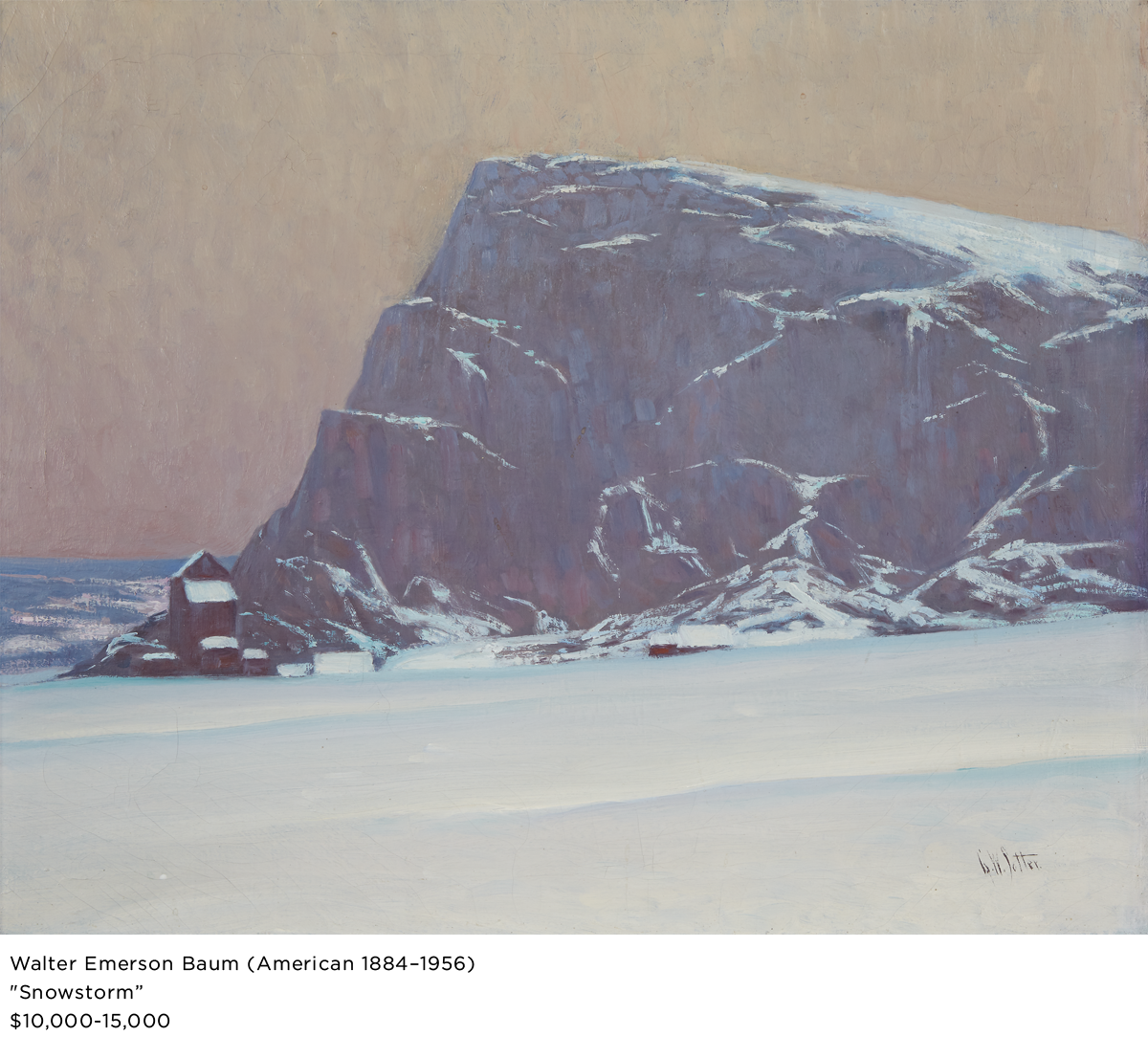 George Sotter's depiction of a nocturnal winter landscape at Bowman's Hill (Lot 126, estimate: $15,000-25,000) captures the quiet, snow-blown wildflower preserve in New Hope. Like many others in the colony, this preserve was a favorite spot for the artist. The present lot is executed in cool tones, rather than the lush bridge scenes so often depicted. 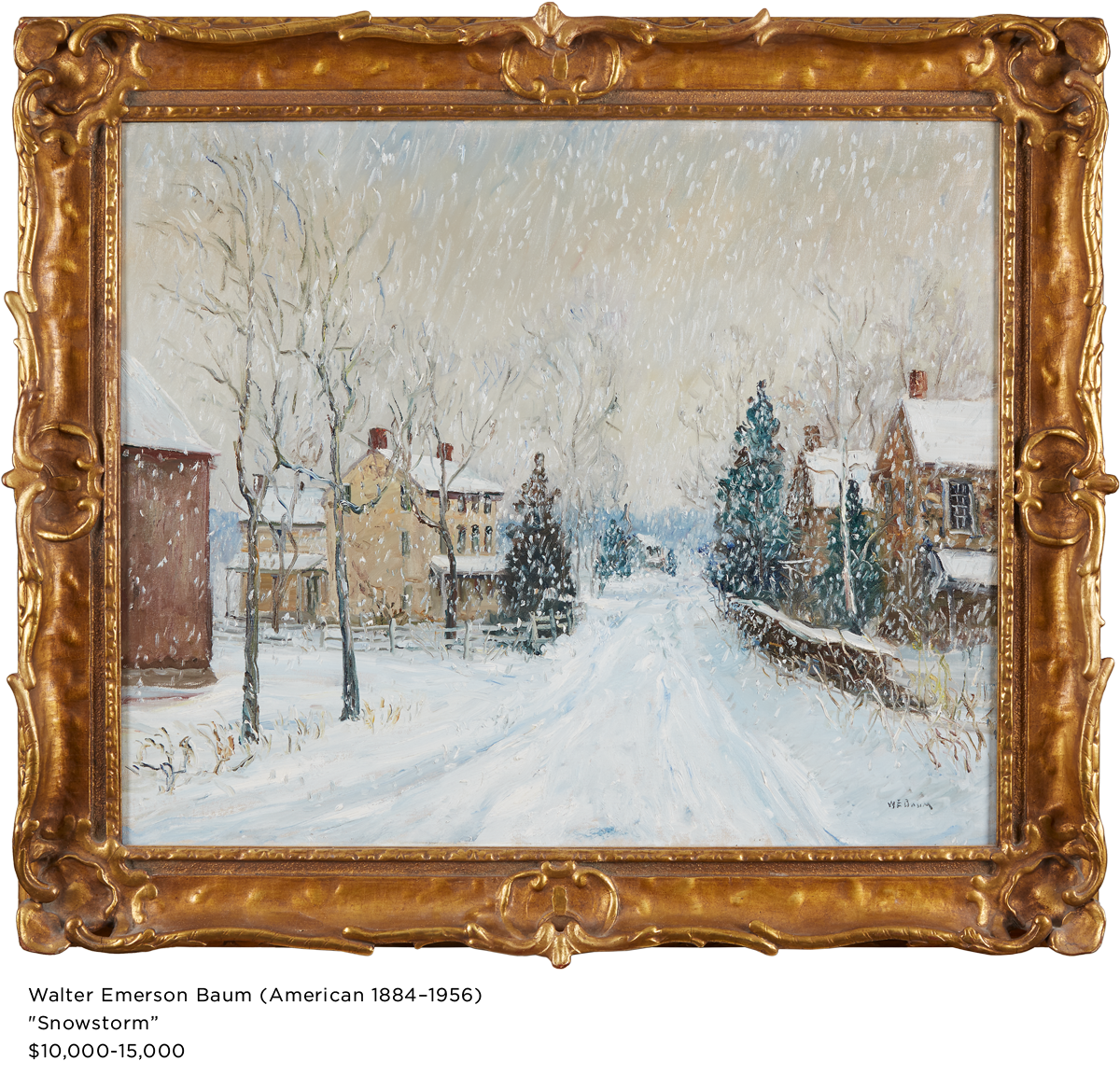 Lot 123, "Snowstorm" by Walter Emerson Baum, (estimate: $10,000-15,000) depicts, as the title suggests, another small Pennsylvania towns blanketed in an active snowstorm; indeed, the canvas is dotted with wisps and dashes of snow. Lot 144, "The Delaware – Winter Morning" by Charles Rosen (estimate: $12,000-18,000) is another view of the Delaware River winding its way through the colony, in a geographic and figurative sense. Rosen was an acclaimed landscape painter, known for his winter scenes, painted alongside Lathrop before moving away from the New Hope area.