A Year of Plenty | 8 Works by Daniel Garber 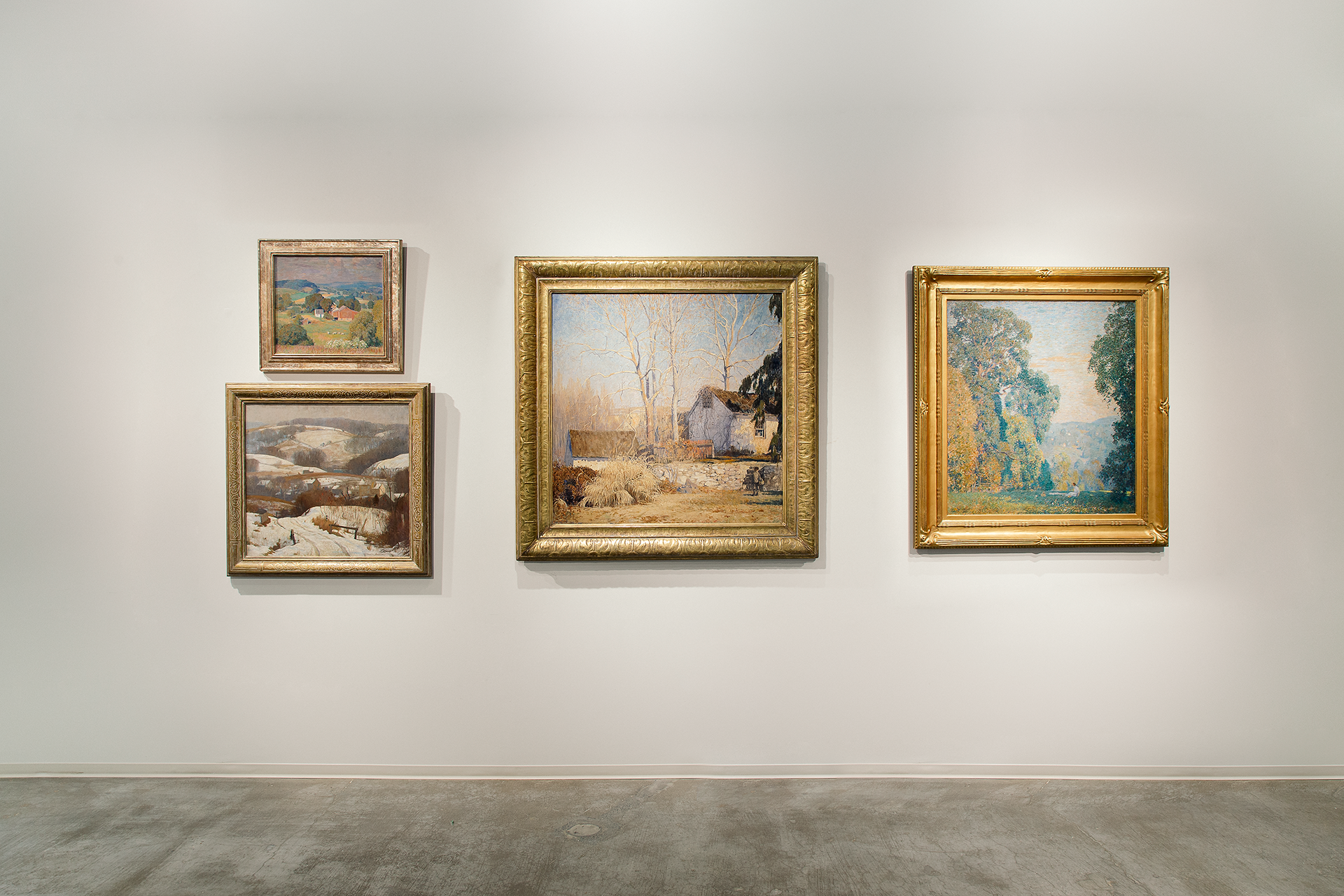 Spanning from 1912 to 1944, and ranging from large, visual statements of an academic vein to more detailed, small-scale renditions of his beloved Bucks County, the present works by Daniel Garber showcase the best of his capabilities and trace his artistic evolution.

In the late 1940s, Daniel Garber met Harold Saylor, a prominent judge in the Philadelphia Orphan’s Court. Soon, Saylor became an avid collector of Garber’s work, ultimately purchasing the largest number of paintings the artist ever sold to a single private collector. Saylor’s purchases included both the artist’s early work and later compositions. His continued patronage was an important late-career affirmation for Garber, whose fragile health and troubling heart conditions prevented him from painting as often as he’d like.

Lot 95: Last of Winter, an early painting by Garber

Amid the eight works on offer this winter, four come directly from the descents of Harold Saylor. Among them is The Last of Winter (Lot 95, $250,000-400,000), an impressive canvas executed in February 1912, which bears strong resemblance to The Wilderness, Garber’s iconic landscape painted just one month later.

Rarely found in Garber’s oeuvre, the scene depicts a lone figure - that of a small boy carrying a basket. His back presented to the viewer, the boy stands by the staircase of a large white house majestically set against a clear, freezing blue sky, while the branches of the surrounding naked trees covered with elegant vines, decorate the rest of the composition.

In a commentary of the Pennsylvania Academy of the Fine Arts’ 108th Annual Exhibition, the reviewer noted: "On another wall there is a landscape with what dealers call ‘quality’. It looks at once rich and juicy in color and dramatic in feeling, the bare trees against the sky excite my interest, the fuzzy white house and the brown shrubbery in the foreground make me feel that here I have discovered without the catalogue the first big picture of the show."

Executed in the 1930s and 1940s, they use a quicker, softer brushwork that speaks for the artist’s more mature style. Devoid of any human presence, automobiles, telephone and electric poles, each scene also stands as an idealized representation of nature, an idyllic and preserved America which Garber sought and found reassuring.

Lot 72 and 106: works from a private Pennsylvania collection

Weatherby’s Oak (alternatively titled The Picnic, (Lot 72, $200,000-300,000) is another important highlight of the sale. Kept in a private Pennsylvania collection since the early 1980s, the work was "many times exhibited in galleries'' during Garber’s lifetime according to his wife, Mary Franklin Garber - most likely the female figure depicted in the foreground of the present canvas.

The painting depicts a late summer picnic set near Point Pleasant, which can be seen stretching into the distance. As typical with Garber, the landscape is treated vertically, almost like a portrait, with a strong emphasis made on the effects of light and shadows through the leaves and surrounding bushes.

Garber’s expert handling of colors can also be seen in the evocatively titled Blue and Gold (Lot 106, $150,000-250,000), a quintessential view of a quarry in Byram, New Jersey, in which the artist mixes lush oranges, warm browns, soft pinks and fiery turquoise blues altogether to suggest a dramatic sunset, as well as to create a satisfyingly abstract and modern pattern of bands on the canvas. 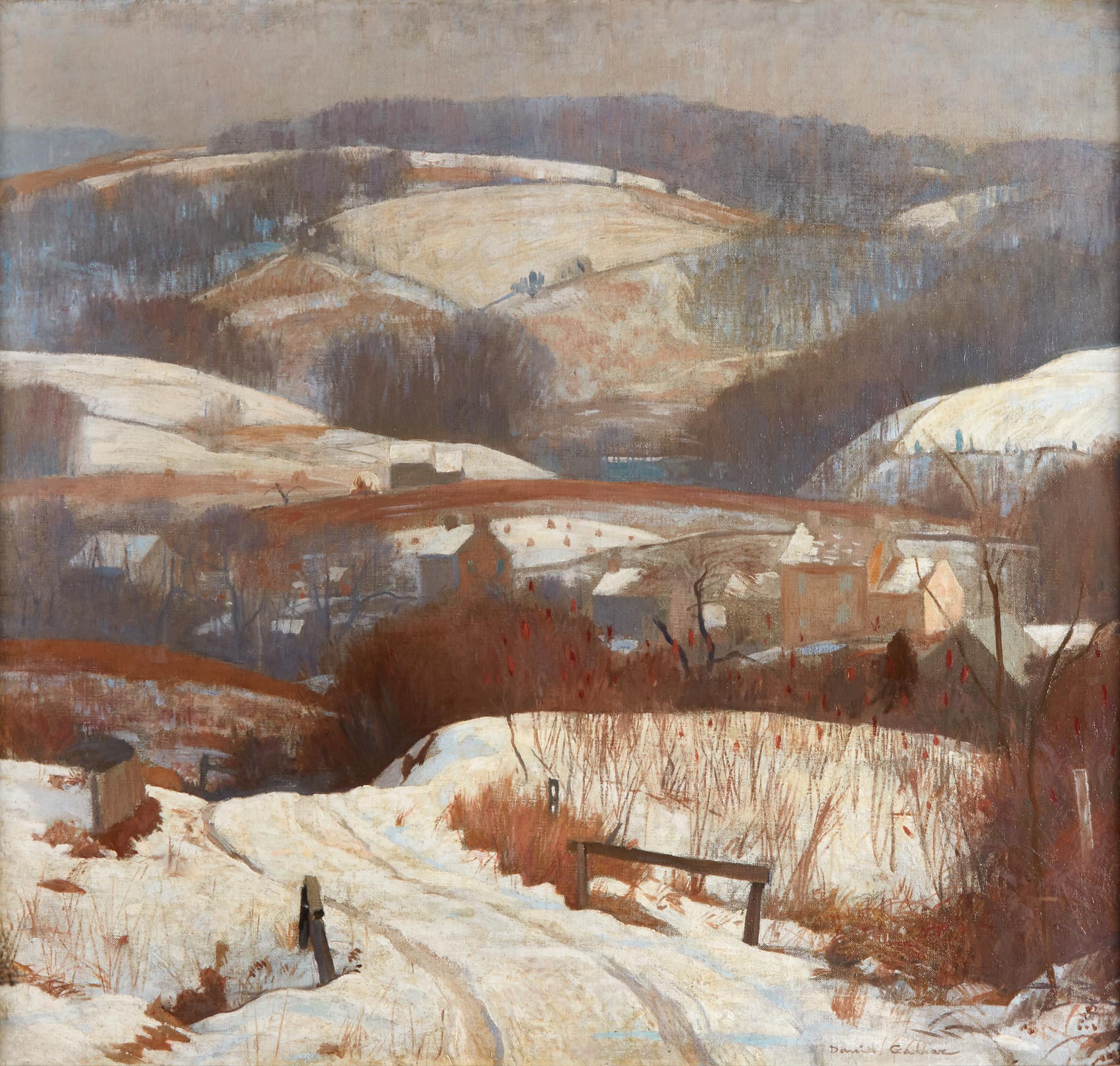 Long kept in a private corporate Philadelphia Collection is Winter (Lot 115, $100,000-150,000) - a rare snow scene by Garber. Treated as a wide open view of a hilly landscape blanketed in snow, the canvas presents us with a high-vantage point of Kintnersville. Through the few houses and outbuildings scattered over the expansive landscape, as well as the tracks in the foreground snow, Garber suggests a faint human presence in peaceful cohabitation with nature.